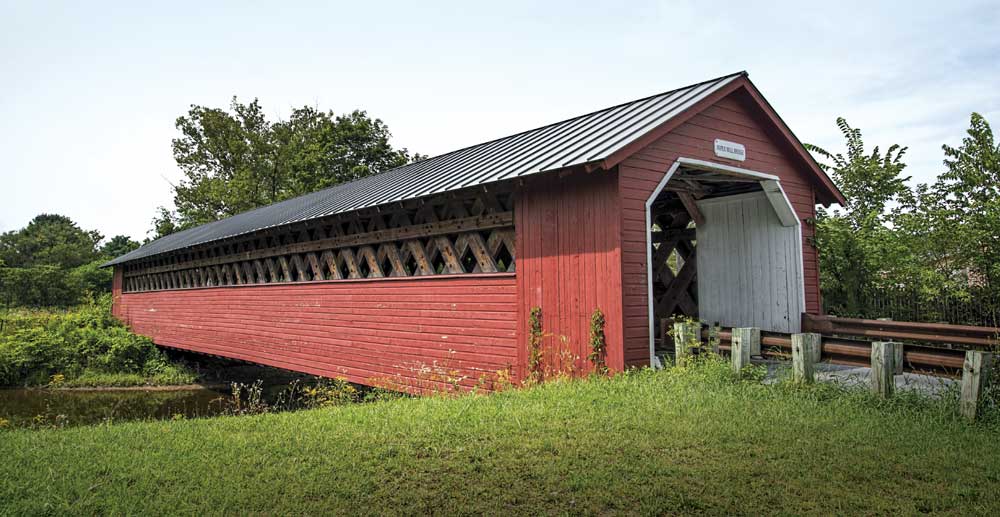 Overflowing with history, Bennington and the surrounding area converge in a kaleidoscope of charming villages, covered bridges, mountain forests, hiking trails and a battle monument

Vermont, known as the Green Mountain State, has a population of 627,000 and is one of the most rural states in the country. It is painted with picturesque 19th-century villages, mountain forests, lush farmland and historic sites. One of the most popular places to visit is
the Bennington area.

Considered the gateway to southern Vermont and all it has to offer, Bennington has a population of just 15,450 people yet is one of the state’s 10 largest cities. Nearby is the Green Mountain National Forest, home to black bears, deer, coyotes and eagles, along with hiking trails and scenic overlooks. The region has commercial campgrounds with full amenities as well as more rustic public campgrounds, which serves to make southern Vermont a prime camping destination.

Just east of Bennington is one of our favorite campgrounds, Woodford State Park, which sits atop a forested mountain plateau off State Route 9. At 2,400 feet, the campground has the highest elevation of any park in Vermont. It surrounds 23-acre Adams Reservoir, which has a beach, plus rowboat, canoe and kayak rentals, as well as hiking trails. Woodford State Park borders the Green Mountain National Forest and the George D. Aiken Wilderness area.

Although lacking full hookups, the campground has the basic RV necessities, is quiet and off the beaten path, and yet is still in close proximity to Bennington and other attractions. After enjoying the campground for a day or so, exploration always calls to us.

When entering the village of Old Bennington, besides the lovely historic homes, an impressive sight is the First Congregational Church. The original meeting house was built in 1763, and much of Vermont’s early history took place here. The present structure was completed in 1806 and dedicated by the state legislature in 1935 as Vermont’s Colonial Shrine. This New England-style church is imbued with country grandeur and still in use today. 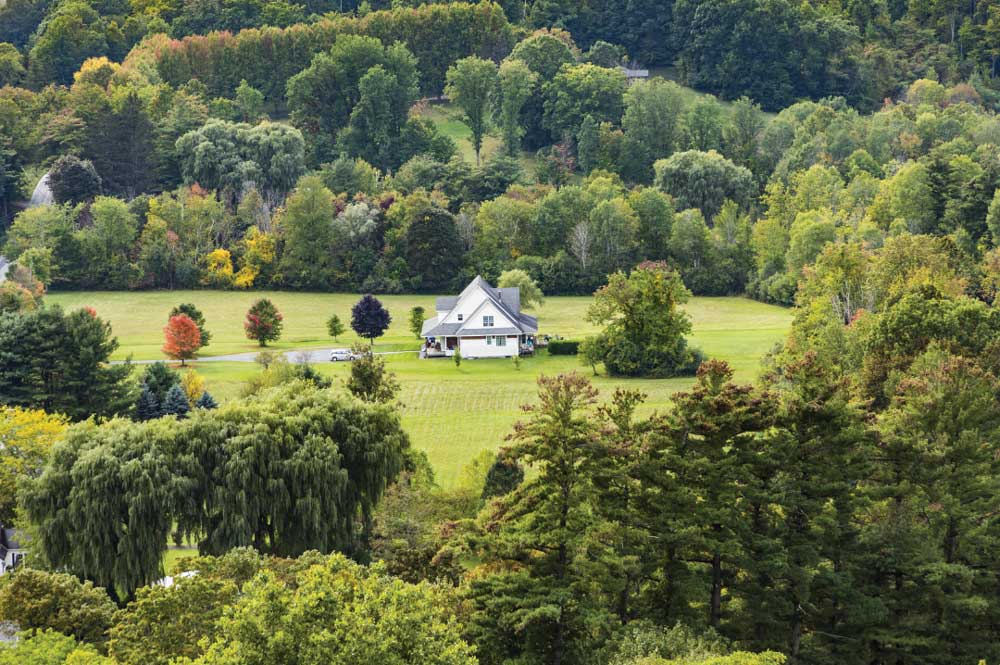 A Victorian-style farmhouse epitomizes the charm and simplicity of rural Vermont.

The adjacent Bennington Centre Cemetery contains the graves of 75 Revolutionary War patriots along with British and Hessian soldiers killed in the Battle of Bennington. It, too, received a dedication by the legislature as Vermont’s Sacred Acre. Walking through these hallowed grounds pulled on our emotions with the realization that our independence and freedom were paid for with the blood and lives of these people. Also resting here is the famous American poet Robert Frost.

The nearby Bennington Battle Monument commemorates the 1777 Battle of Bennington where Revolutionary War General John Stark and the Green Mountain Boys defeated the British red­- coats. Rising 306 feet into the heavens, this stone obelisk provides an impressive multistate panorama after an elevator ride to the top.

At the monument’s gift shop and visitor center, maps of the city can be obtained for walkabouts and directions to Bennington’s three covered bridges — Silk, Paper Mill and Henry — all located just off State Route 67A. My wife, Linda, and I are aficionados of covered bridges, and in southern Vermont they dot the countryside like monuments to a simpler era. 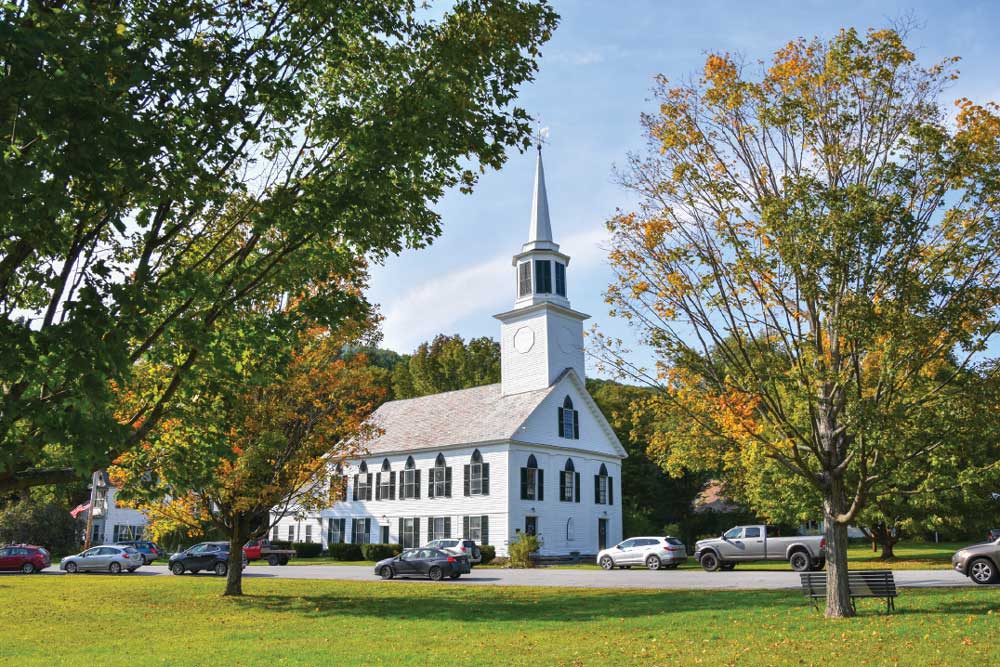 The Townshend Church, built in 1790 and listed on the National Register of Historic Places, stands stoically on the commons.

Traveling north of Bennington on historic State Route 7A or 7 takes you to Mount Equinox Skyline Drive. This 5.2-mile road is the longest privately owned paved toll road
in the United States. Vistas and picnic areas along the way offer impressive views of southern Vermont and the Battenkill River that meanders through towns, farms and woodlands below. At the 3,848-foot summit, temperatures are usually 10 degrees cooler than in the valley.

The road leads to the highest peak in the Taconic Range, and from the decks of the St. Bruno Scenic Viewing Center, a 360-degree panorama unfolds like a colorful quilt created by Mother Nature. On a clear day, you can see five mountain ranges in four states: the Taconic and Green mountains of Vermont, the Whites of New Hampshire, the Adirondacks of New York and the Berkshires of Massachusetts. The center’s videos depict the history of Equinox Mountain and the still-active Carthusian Monastery, which owns the mountain and toll road.

A short drive from Equinox Mountain is Manchester and Hildene, the historic summer home of Robert Todd Lincoln, son of Abraham and Mary Todd Lin­- coln. Born in a log cabin, Abraham Lincoln rose from his humble beginnings to become president and lead the nation through the Civil War.

Robert Todd Lincoln chose business over politics, becoming president and chairman of the Pullman Car Company, maker of iconic railroad cars and one of the largest manufacturing companies in the early 20th century. He built his 8,000-square-foot Georgian Revival mansion in 1905 and used it as a summer home. Now open to the public, it’s an impressive structure with 24 rooms and eight bathrooms.

Robert Todd Lincoln died in this home in 1926. Descendants of President Lincoln lived in the house until 1975. Many family mementos are on display throughout the mansion. The immense estate has colorful gardens, a farm and a Pullman railroad car built in 1888 that was used by Theodore Roosevelt in his 1912 Bull Moose presidential campaign.

Entrance fees are steep at $23 for adults and $6 for youth (children under six are free), but discounts are offered to adults who return for a second day. Self-guided tours are included, though guided ones of the mansion have an additional fee. Twelve miles of walking trails grace the estate. 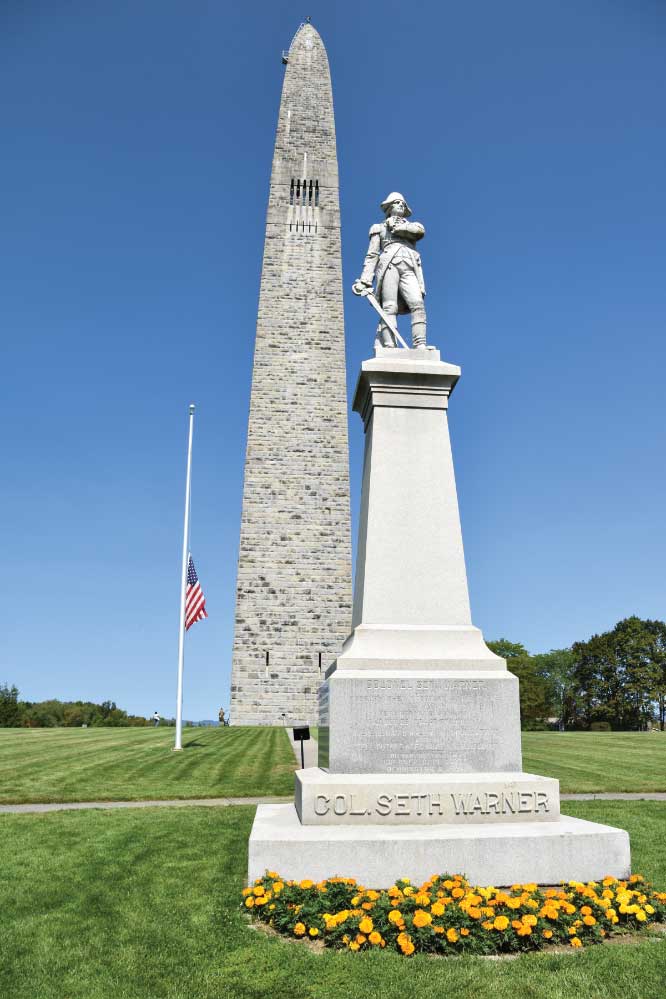 If you are traveling with children or are a kid at heart, the nearby Bromley Mountain Adven­- ture Park in Peru is worth a visit. A compact park with an alpine slide, four zip lines, aerial bridges, the Big Splash water ride and other attractions make for hours of fun. Chairlift rides to the summit and mountain bike opportunities add to its allure.

Southeast of Peru on Route 30 is Townshend, a quintessential New England town. Chartered in 1753, it is named after British politician Charles Townshend, whose tax initiatives intensified hostilities that eventually led to the American Revolution. Many of the original farms in the area still dot the lush countryside like sentinels of simplicity.

The town green, lake, antiques stores, and Lawrence’s Smoke Shop and Country Store are attractions all on their own. The Smoke Shop offers a true taste of Vermont with a variety of smoked meats, cheeses and maple syrup, plus clothing and sundries. It’s a great place to stock up for a campground feast.

Townshend is also known as the setting for Chevy Chase’s comedic film Funny Farm about a writer who moves to the country for solitude but instead finds constant distractions.
Townshend State Park has a small rustic campground, lake, beach and hiking trails. The campground is not recommended for large RVs as there are steep and tight roads that are hard to navigate.

Two of our favorite sites are the beautiful Townshend United Church of Christ in the town commons and the Scott Covered Bridge just north of the commons on Route 30. Built in 1870, it extends 277 feet across the West River. Listed on the National Register of Historic Places, it recently went through a $2.35 million renovation that restored it for pedestrian and bicycle use but not motorized vehicles.

Farther south, on Route 9, the Molly Stark Byway, which runs west to east from Bennington to Brattleboro, is Hogback Mountain Scenic Overlook, known for its 100-mile view. A ski area that closed in 1986, the site was saved by the efforts of local residents and is now preserved as part of the Vermont Land Trust.

Hogback Mountain is open year- round for hiking, snowshoeing and cross-country skiing. The expansive view takes in the forested mountains of Vermont, Massachusetts and New Hampshire. The gift shop at the scenic overview, in operation since 1936, sells Vermont cheese and maple syrup.

After long days of exploring, we enjoy returning to the simplicity of camp for peaceful evenings in front of a crackling fire. There we can relive what we saw and discuss our next day’s adventure. We always look forward to our trips to Bennington, the gateway to the beauty of southern Vermont.

To find more RV parks and public campgrounds in southern Vermont and across North America, use the Find a Campground search tool on the Good Sam Club website.
www.goodsam.com