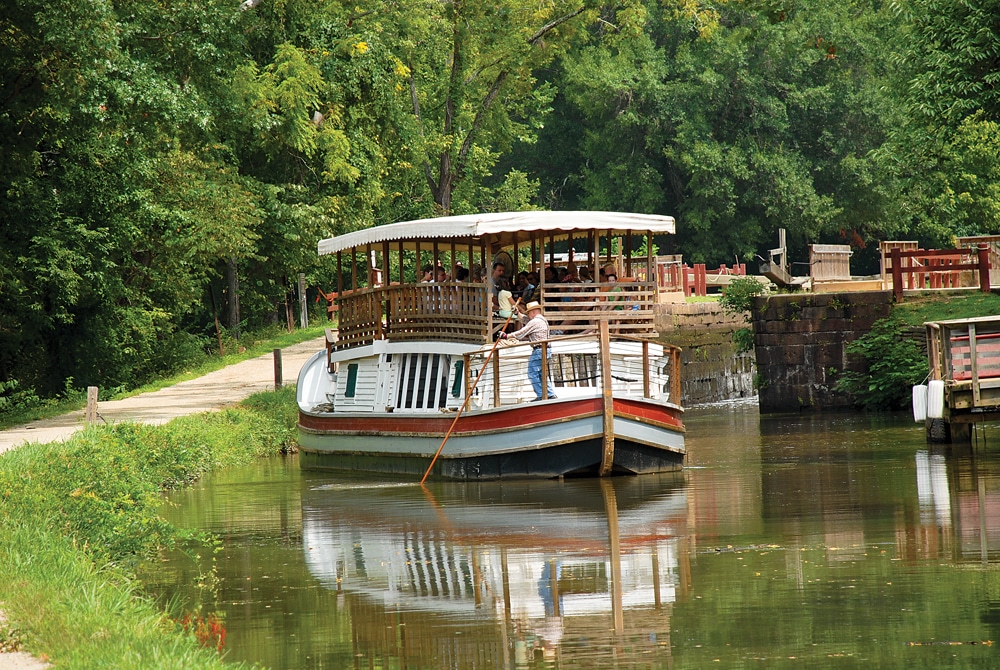 On a recent summer morning we stood in front of the Great Falls Tavern Visitor Center, a few feet away from Lock No. 20 and about 14 miles northwest of Washington, D.C., while we waited for the first trip of the day. Park Ranger, John McCarthy, explained that the fine white-stucco visitor center had originally been the lock keeper’s house that was built when the Chesapeake and Ohio Canal was new in 1828.

Today it includes a small museum, and tickets ($5) for rides aboard the canal boat Charles F. Mercer can be purchased inside. Just west of the canal is a large wooden deck that provides dramatic vistas of the Great Falls of the Potomac.

And a quarter mile or so south, a 0.2-mile walking bridge leads from the towpath to Olmstead Island where panoramas of these magnificent cascades are even more spectacular. The island was named for landscape architect Frederick Olmstead, who had been instrumental in preserving the falls and gorge.

According to NPS canal historians about 35,000 laborers dug the canal and built aquaducts, culverts, locks and other associated structures for the canal.

McCarthy went on to tell us that long before work on the Chesapeake and Ohio Canal — affectionately referred to as the Grand Old Ditch — began, President George Washington was a strong advocate of creating waterways to connect Eastern coastal shipping with the Great Lakes and the Ohio River.

Washington founded the Potowmack Company in 1785 with the intention of making the Potomac River navigable. In 1824, holdings of the Potowmack were ceded to the Chesapeake and Ohio Company. The firm was to build a canal from the tidewater at Georgetown to the Ohio River, to provide a navigable waterway that would serve mainly for bringing coal from the Allegheny Mountains to the capital.

Finally, on July 4, 1828, to the tunes of a brass band and cheers of a crowd, President John Quincy Adams held a groundbreaking ceremony to begin the ambitious project.

It would include 74 lift locks to raise the canal from sea level to 610 feet at Cumberland. Even more impressive, it would take eleven stone aqueducts to carry the canal water over the Potomac’s tributaries; six intake dams to supply water from the Potomac, which the canal closely parallels; numerous waste weirs to control water flow; and 200 culverts to carry roads and streams under the canal. Numerous bridges and lock houses would be needed to complete the project. It was a seemingly full-fledged national economic stimulus package.

Ranger McCarthy told us that the work was very difficult, as the route “led through rocky terrain, not cornfields.” There were also cost overruns — the projected expense was $4 million, which was exceeded by $18 million — as well as labor problems. However, for the next 22 years, some 35,000 laborers, who were mostly Irish immigrants, toiled away, and quite a few died during the construction. A Celtic cross stands at Cumberland, dedicated to the immigrants whose lives were lost building the 60-foot wide, six-foot deep canal. And one gravesite near Sharpsburg, Md., is said to hold the remains of 500 workers.

All the while, during all that strife and struggle, railroad technology steadily improved by leaps and bounds. By the time the canal reached Cumberland in 1850, it was already obsolete as the Baltimore and Ohio Railroad arrived eight years earlier. The canal would go no farther than Pittsburgh, still nearly 180 miles from its intended destination. The B&O already completed the link to the West. Another disadvantage of the canal was the weather. The boats could only travel during mild weather from late March to late October, while the trains could run the same route year-round.

Historic homes and shops are tightly packed in rows along the canal near Georgetown.

In 1889, after the flood and another bankruptcy, ownership of the canal was transferred to the railroad, which continued operating it at a loss to prevent its right-of-way from falling into the hands of the Western Maryland Railway. Operations ceased in 1924 after another flood damaged the canal structure.

We watched the Mercer lock through an eight-foot drop in the canal. Then, after the mules were released from their duties, a half-dozen rangers and volunteers, men and women in 19th century attire, turned the boat around with ropes and poles, towing it backward to the dock. Although some of the boats carried passengers, most hauled mail and other cargo. Operating a boat required a minimum of three people: one to lead the mules (each boat had two pair) another person to steer the vessel and a third to do the cooking. Many of the canal boats were operated by families that lived aboard.

The park currently has seven working mules. One of them, named Frances, now resides at President Jimmy Carter’s Georgia estate. When their working years are over they are found suitable homes. Another mule, Ida, 30 years old, was recently retired after 27 years in the traces, working 7,776 boat trips on the towpath.

In this former working-class district where simple, narrow brick buildings can now sell for $1 million, the canal is lined by high stone walls, topped in places by elegant condos. At bridges the mules must be unhitched. At one time, the tandem hitching allowed two teams to pass on the towpath. However, because there is no drag, the 17-ton, 88-foot long boats could be easily pulled by two people, the rangers told us.

Canal boats traveled up to 30 miles a day, taking six days to make the trip between Georgetown and Cumberland, with downstream boats enjoying the right-of-way. Four miles per hour was top speed, or the boat would create a bank-eroding wake. Ice can also cause damage, so the canal is kept drained from November through April.

Nearly converted to a two-lane highway, the canal was saved and designated a National Historical Park in 1961.

If it hadn’t been for a feisty Supreme Court Justice by the name of William Douglas, the beautiful national monument you can visit and enjoy today would be nothing but an ugly two-lane highway. In 1938 the United States acquired the abandoned canal — it was drained 14 years earlier — planning to restore it as a recreation area. The lower 22 miles of it were repaired and rewatered, but when the country entered World War II the project was halted. By 1954, Supreme Court Justice William Douglas wrote about a national park he envisioned “at the capital’s back door — a refuge, a place of retreat, a long stretch of quiet and peace.” He was responding to a Washington Post editorial recommending that the old Chesapeake and Ohio Canal, a long-out-of-use waterway linking Georgetown in Washington, D.C. and Cumberland, Md., be turned into a parkway.

“It is a sanctuary for everyone who loves woods,” Douglas continued, “a sanctuary that would be utterly destroyed by a fine two-lane highway.” He invited newspaper editors, reporters and others to join him on a hike along the old canal’s entire 184.5 miles. Fifty-eight signed on — with only nine, including Douglas, walking the whole way — and on March 22 that year the highly-publicized eight-day trek began near Cumberland.

The effort was a success. Douglas and other concerned citizens persuaded Congress to protect the canal, and in 1961 it was designated a National Monument. One decade later, it was made a National Historical Park.

At Georgetown in Washington, D.C. and Great Falls, Md., visitors can experience water travel of an earlier day; on mule-drawn canal boat rides offered by park rangers and volunteers in period costume. The hour-long narrated trips on replica boats, which depart three times a day, are available Wednesday through Sunday, May through October. Hikers and bicycle riders can travel the entire, nearly-level towpath, maintained by the National Park Service, where more than a century and a half ago mules first leaned into their traces. Most of the canal is now dry or un-navigable, but whether they come to ride a canal boat or walk or bike the tow path, more than 3 million visitors a year come to enjoy the 20,000-acre park.

Parking is available at both sites, but we recommend leaving your tailer at the campground. Our choice was first-rate Cherry Hill Park in College Park, MD, about 16 miles east of Great Falls. For information call 800-801-6449, or visit www.cherryhillpark.com. For more campgrounds, search: www.woodalls.com or www.goodsam.com.