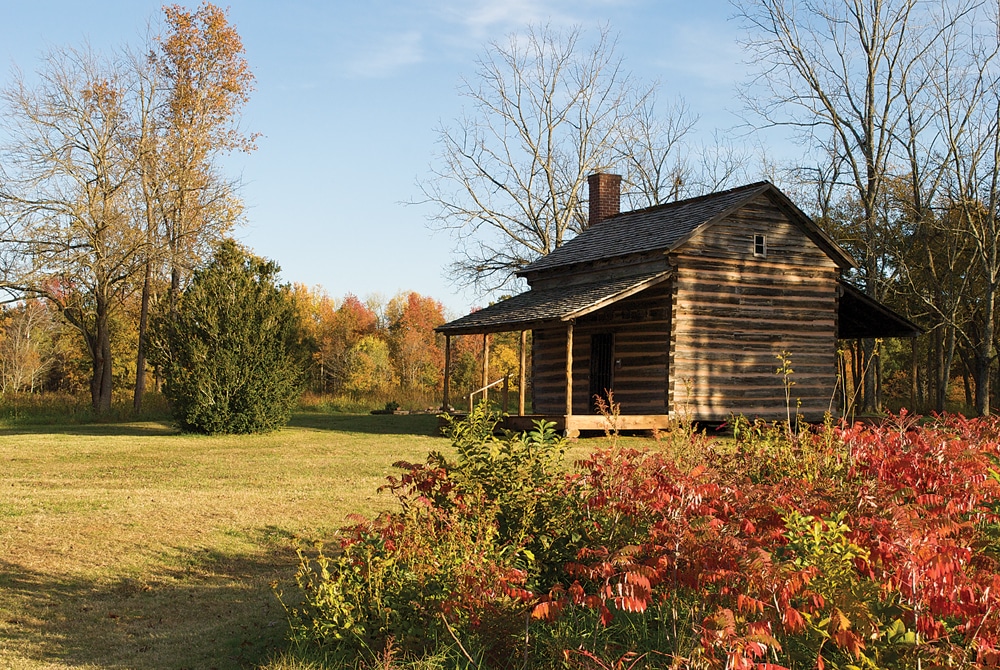 When it comes to spectacular fall color, South Carolina takes the cake. Driving south in early November along Interstate 26 toward Cherokee Foothills National Scenic Highway, we were treated to a dazzling display that went on for miles. It was a Technicolor show as fine as anything Disney ever produced. Every leaf along the heavily treed route blazed with color: red, yellow, peach, orange or burgundy, according to tree type.

For fall color drives, nearly any road in the Palmetto State will do; but the 110-mile “Cherokee,” aka South Carolina Highway 11, that winds through the foothills of the Blue Ridge Mountains in the Upcountry not only offers the adventurous RVer gorgeous autumn color but fascinating history and outdoor adventure as well.

The summer before, backcountry patriots had been ordered to swear allegiance to the British Crown. Instead, they waged a two-week campaign that ended with a British defeat at King’s Mountain, and soon another at Cowpens. It was a decisive battle that led to the eventual British surrender at Yorktown.

The Robert Scruggs cabin at Cowpens is a replica built on the site of the 1828 original.

At the visitor center, an 18-minute film “Cowpens: A Battle Remembered” tells the story, explaining, “if it hadn’t been for Cowpens there wouldn’t have been a Yorktown.”

Congress established the battlefield site in 1929 and made it an official national battlefield 43 years later. Today a 1¼-mile walking trail winds around it, and placards with text and neon-bright paintings depict the fight. The park also includes a two-mile nature trail, and three-mile auto loop with a stop at the Robert Scruggs House. The restored cabin was built by postmaster Scruggs in 1828 and moved here from nearby in the 1970s.

The drive continues west, passing peach orchards and strawberry fields. These summertime crops were finished for the year during our trip, but produce stands offering apples, squash and tomatoes remained.

From here, the mountains loom large on the northwest horizon, shrouded in a late afternoon blue-gray haze that, according to Cherokee legend, is the shadow of an enormous spirit moving across the land.

But as you drive west the hues of the mountains start to pop. Long flanks become tapestries embroidered with the boldest reds, oranges and yellows you can imagine — and the colors stay bright long after the sun has set.

Of South Carolina’s 47 state parks, more than half a dozen lie along Highway 11 or nearby and many offer camping. Headquarters for our five-day visit was the wooded campground at Table Rock State Park located halfway along the drive. We recommend leaving the camper parked for the duration.

Built by the Civilian Conservation Corps in the 1930s and now on the National Register of Historic Places, the 3,000-acre park offers 96 campsites, 92 of these include water and electricity, and there is a dumpsite available. Rates are $21-$25 per night. A well-recommended visitor center is across the highway.

We began the next morning at Campbell’s Covered Bridge Historic Park (drive south 2.2 miles on Highway 14 and watch for signs). The 35-foot-long bridge, the only remaining covered bridge in the state, dates back to 1909. The site is grand, with stone viewing terraces, picnic table and a dozen benches.

The Poinsett Bridge, built in 1820, is the oldest bridge in the state.

Return to Highway 11, then watch for signs to the Gothic-style stone Poinsett Bridge, built in 1820 and the oldest bridge in South Carolina. A marker explains that the bridge, which spans burbling Little Gap Creek, was part of the old State Road between Charleston, S.C., and Asheville, N.C. To reach the bridge, take U.S. Highway 25 north and watch for signs. Fall color here is exceptionally gorgeous, with red and orange maple leaves glowing like stained glass across the landscape.

Continue west on Highway 11 to the Scenic Byway Welcome Center, newly opened in an 1870 former general store and post office, and now on the National Register. Historic artifacts displayed on original counters and shelves include photos, gingham dresses and antique bricks from the Greek Revival Blythe-Goodwin-Hagood House next door.

Various owners enlarged the house, built in 1793 as a stagecoach stop. The once-fine home was last lived in by Henry Hagood, who bought it in 1914 and ran a corn mill there into the 1950s. The home, in near ruins, was bought in 2005 by the Cherokee Foothills National Scenic Byway Association, which repaired the roof and foundation and has plans for more restoration.

Ahead at Cleveland, we suggest stopping at Big Bear Trading Post, where owner Frank Nicolette offers chainsaw sculptures. He opened the shop 17 years ago as a video game parlor and says he took up carving out of boredom. It became a passion, and some of his work is positively inspired.

But more intriguing is his dog, Sparky, a 17-year old black and tan with a remarkably high IQ. The two perform for visitors: Nicolette asks for a screwdriver or pliers, Sparky scuttles to a toolbox and returns with it; he plays a flute, she sings along; he asks how she greets a lady, she bows deeply.

Across the road is Don Forrest’s

F-Mart, an old-fashioned store that “sells a little bit of everything including the best hot dogs in town.” The store, run by Forrest’s family since 1940, offers groceries and a surprisingly extensive menu.

Just ahead is Wildcat Branch Falls, the most accessible of the Upcountry’s 31 waterfalls.

The 30-foot falls, a trickle after weeks of near-drought, usually fans wide across a stone staircase. Alongside the falls are steps to a path that leads to another set of falls.

Though all the falls in the Upcountry area are lovely, the most spectacular is Raven Cliff Falls, which splashes along a ragged 400-foot descent. To see it, turn right on U.S. 276, a corkscrew road and mosaic of gorgeous fall color.

Along the way is Bald Rock Heritage Preserve, a 6-acre expanse of elephantine-smooth rock that provides stunning mountain panoramas, and Caesar’s Head State Park, where a short, steep path leads to a profile view of the Emperor’s garlanded head.

From the park’s visitor center, a path leads to a deck at a dramatic overlook. Across the deep valley you see where the Blue Ridge Escarpment ends with an abrupt 2,000-foot drop to the foothills, and the Piedmont, French for “foot of the mountains,” begins. Half a dozen peaks outlined on the horizon include 3,124-foot Table Rock Mountain and its 2,600-foot granite companion, Stool Mountain.

Parking for Raven Cliff Falls and the trailhead are ahead. It’s an easy two-mile hike to the viewing platform for the falls, a series of cascades spanning outcrops on the craggy rock-face.

Return to Highway 11, and at U.S. Highway 178 turn left to Hagood Mill Historic Site and Folklife Center. Among the seven historic buildings are a pair of antique log cabins and the still-operational 1845 mill, one of South Carolina’s oldest.

One of the many waterfalls tumbling to the surface of Lake Jocassee.

A new exhibit displays the 17 prehistoric petroglyphs recently discovered here. Previously, only 50 were known to exist east of the Mississippi.

Back on Highway 11, continue to Keowee-Toxaway State Park, which offers camping and a small museum, and on to Devil’s Fork State Park, where camping is also available and 7,500-acre Lake Jocassee lies adjacent.

Half a dozen outfitters offer boat trips — by pontoon, canoe or kayak — and we recommend a cruise for viewing several waterfalls, fall-garbed trees and a variety of birds.

The 400-foot-deep lake was created in the 1960s to provide electricity, filling a valley where churches, cemeteries and houses stood, though most were moved away. Jocassee, where scenes from the film “Deliverance” were filmed, is also headwaters for 18,500-acre Lake Keowee just east, and 56,000-acre Hartwell Lake, the last attraction on the drive.

Ahead, turn right off Highway 11 on Oconee Station Road for Oconee Station State Historic Site, an 18th-century outpost and meeting place for European-Americans and Cherokees. A 1792 stone blockhouse is here, also a fine two-story brick house built in 1805 by William Richards, who ran a trading post; both buildings are on the National Register.

Whitewater activity is popular on the Chattooga River, the rocky boundary between South Carolina and Georgia.

Continue on Highway 28 toward the highlight of this odyssey: a whitewater rafting trip on the National Wild and Scenic Chattooga River. The 57-mile river, so turbulent that only 13 miles can be floated, separates South Carolina and Georgia.

We met guides Erin McKergow and Brenda Lovell at Wildwater headquarters, located in the century-old former Long Creek Academy. Wildwater, established in 1971, is one of just three outfitters with permits to take visitors on the river and was grandfathered in before the Chattooga was given its designation in 1974.

As we drove with them to the river, McKergow explained that at least two inflatable boats must be together at all times. On this occasion, it was us and McKergow in a 10-foot raft and Lovell in an inflatable kayak.

Of the various trips Wildwater offers, we chose the four-hour Scenic Mini-Trip, which includes a stop for lunch on Garnet Beach on the Georgia side.

Much of the run involves dodging rocks, inching through tight passages and drifting along short stretches of fairly mellow whitewater. But we came for the rapids — and they are plentiful. Up to 8 feet high, with names like Watauga Chute, Rock Jumble and Screaming Left Hand Turn, each one is more thrilling than the last. It’s a fabulous trip and highly recommended.

Our last day of the trip, we drove to Hartwell Lake State Recreation Area, which attracts 14 million visitors a year. They come for the boating, swimming, hiking and camping, and in summer, rare is the cove without swimmers or small boats bristling with fishing poles.

The shoreline of Lake Jocassee is ablaze with fall color.

We saved our last stop — an overlook deck atop lofty Sassafras Mountain — for sunset. To get there return along Highway 11 and drive west on U.S. Highway 178, 12 miles to the summit. It’s a winding, narrow, steep road, but a magical drive in late afternoon when long shafts of amber sunlight illumine the trees. And the view from the top is phenomenal.

We arrived just as the sun dipped below a far ridge, leaving a wide fuchsia stain along the horizon in its wake. Nearer hills were draped in purple mist and Lake Jocassee, no bigger than a reflecting pool from this vantage, shimmered metallic blue.

Night comes on fast and there are no lights at the Overlook. But as we started back down the mountain a luminous globe appeared through the trees, the full moon was up.

While following South Carolina’s Cherokee Foothills National Scenic Highway, you might want to venture off the highway to enjoy other Upcountry attractions. Some suggestions: