Chasing the Ghosts of the West 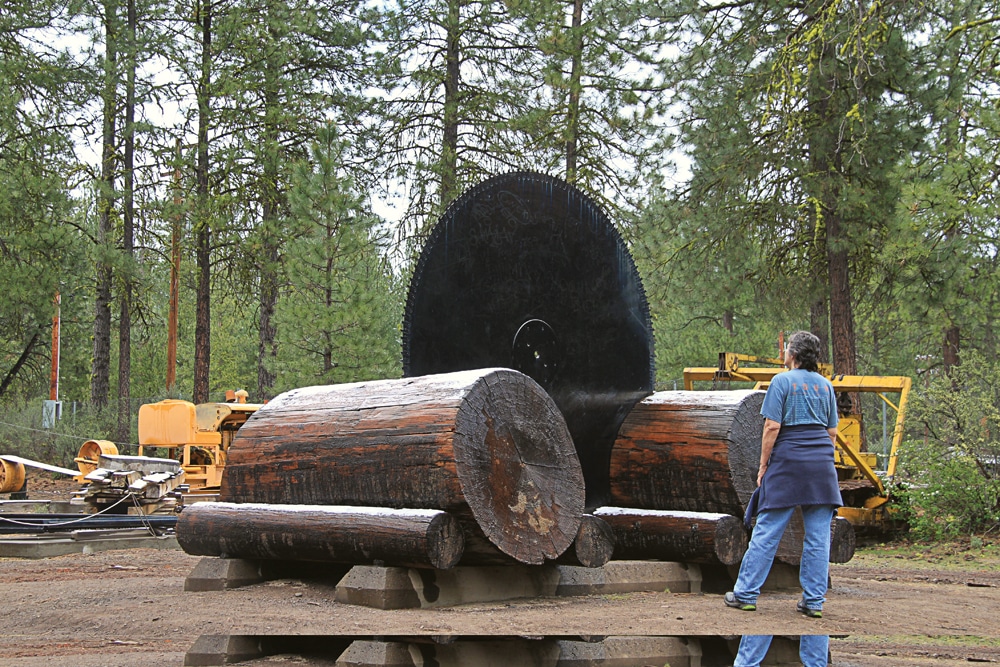 Ghosts from older times and other lives began to appear before we crossed the Oregon border on our way to Nevada.

The state of Nevada boasts more than 600 ghost towns and mining camps, many not more than a few crumbling walls and foundations. My sister and I recently took a motorhome trip to explore some of the Silver State’s best remaining ghost towns.

We headed from Madras, Ore., on the east side of the Cascade Mountains, south on Highway 97. This straight and well-maintained road climbs from a high desert elevation of 2,400 to 4,800 feet through mountains decorated with spectacular stands of old ponderosa pine.

A visitor checks out a huge saw blade at the Collier Logging Museum in Collier Memorial State Park, Chiloquin, Ore.

While there are plenty of private RV parks along Highway 97, we chose Collier Memorial State Park in Chiloquin because it offers water and electricity, an on-site dump station and spacious sites nestled under pines for the bargain price of $22. A half-mile from camp we also discovered the surprisingly impressive Collier Logging Museum and the first of our many ghosts.

From camp, we hiked along Spring Creek Trail and, at the confluence of Spring Creek and the crystal clear Williamson River, came upon what looked like a fully functional logging camp that had stepped back in time 150 years. There were steam-powered sawmills, horse-drawn wagons, antique tools and one-room logger cabins, including the Jim Redden cabin built in 1870. One exhibit featured a man-sized slice of the 200-year-old Clatsop Douglas fir from Seaside, Ore.

We walked along the logging camp’s streets, gazing at this rare assemblage of logging tools and technology, stopping to read interpretive kiosks and examine old-time photos. We felt the spirit of woodsmen who came from all over the world and gave their blood and sweat to shape eastern Oregon’s history and culture. We could almost hear the whine of their saws and their shouts of “Timmbberrr!”

One of the joys of traveling during the spring and fall seasons is that campgrounds and other attractions are less crowded and often less expensive. The disadvantage: weather can be fickle. We woke to a dusting of snow and, nearly all the way to the California border, encountered rain, hail and spitting snow.

The weather cleared a bit as we passed Klamath Falls and the huge Upper Klamath Lake and, over the California border, Tule Lake. This entire area is an important part of the Pacific Flyway for migratory birds and we spotted white pelicans flying in “V” formations. We paused briefly at the Modoc National Wildlife Refuge to check out water birds splashing in this gentle wildlife nursery.

California’s Highway 395 travels south through high desert country – sweeping sage-covered plains and mountains studded with juniper. At an altitude of 5,000 feet, we encountered a small herd of female antelope and then, a bit farther along, a young buck with a full three-prong rack of horns.

With 18 inches of snow, the 20-mile road into Berlin-Ichthyosaur State Park proved both challenging and beautiful.

It began raining and hailing again as we tooled south down Highway 361 and turned off on 844 for the 20-mile drive to the ghost town of Berlin and Berlin-Ichthyosaur State Park. Berlin was a mining town established at the base of the Shoshone Mountains in the late 1800s. Ichthyosaurs (pronounced “ick-thee-o-sores”) were marine reptiles that swam here 225 million years ago when a warm ocean covered the land. The state has put these two “ghosts” – ancient marine reptiles and gold and silver miners – together at Berlin-Ichthyosaur State Park.

As we entered the park, the cabins and outbuildings of Berlin looked like something from a Christmas card. Snow hung heavy on an old boarding house, the assay office and the giant mill building. Two rangers in their four-wheel-drive truck led us through snowdrifts and standing puddles the size of small cars to our campsite, a back-in space with no hookups.

Wanting to learn about the park’s “terrible lizard,” we hitched a ride up the hill to the Fossil House, where we met Robin, the ranger who has been giving talks about these creatures for the past 13 years.

Ranger Robin points out the vertebrae of an ichthyosaur, a marine reptile that lived in this area when a warm ocean covered Nevada.

“The ichthyosaurs were marine reptiles that ranged in size from 2 to 70 feet long, that’s 8 feet longer than the blue whale, the largest creature currently on the planet,” he told us. “They could dive to 13,000 feet, breathe underwater for 20 minutes, ate huge snail-like ammonites, and were, for 155 million years, the most successful vertebrates that ever lived.”

The Fossil House is the actual dig site where researchers from U.C. Berkeley found the largest concentration of ichthyosaurs in the world. The exhibit contains fossilized vertebrae, flippers and skulls of several creatures. This pod, nine in all, is a fraction of the 100 animals believed buried in the park.

Tonopah and “Queen of the Silver Camps”

Tonopah, 120 miles south, is still a rough-and-tumble mining town that looks much like it did in the 1800s. Options for camping are limited and we pulled the rig into Joy Land, a gravel-topped park on the edge of town that boasts electricity and a new shower house with two spacious showers and a couple of washing machines where we cleaned our muddy clothes.

The stopes are places where ore veins came to the surface. Miners had to climb down rickety ladders into these deep crevices.

The town’s biggest draw is the Tonopah Historic Mining Park, a 100-acre exhibit on the site of the original claims that started the gold/silver rush here and produced more than $1 billion (in today’s dollars) of rich ore. While the morning dawned brilliant blue, the visitor center was closed, so we walked the self-guided tour that includes restored mining equipment and old ore processing buildings.

Everywhere we looked, shards of old glass winked at us. We crossed over steel bridges and gazed down into “stopes,” deep cracks in the earth into which miners climbed to dig out the ore. A rickety wooden ladder descended into the darkness of one of these crevices and we imagined we could hear the faint pounding of ghostly miners’ hammers.

Less than 30 minutes south on Interstate 95 is Goldfield, a “living ghost town” of about 300 people and, according to some, countless ghosts. The “Queen of the Silver Camps,” Goldfield once boasted 30,000 people, a five-star hotel, a fancy courthouse and Tex Rickard’s Northern, a bar so long that 80 bartenders were employed to serve customers.

Today, the little town is a combination of tumbled down buildings and a scattering of businesses, including Gems of the Great Basin, a surprisingly upscale jewelry store; Hidden Treasure Trading Company, an eclectic collection of antiques, souvenirs, rocks and oddball junk all housed in rock-covered buildings; and the Santa Fe Saloon, the oldest continually-operating business in Nevada.

Old bottles are common around the ghost town of Goldfield.

Walking through Goldfield’s old miner cabins, discarded mining equipment, railroad engines, antique firetrucks, rusting automobiles, a building of mud and glass bottles, and even an early motorhome made us feel as though we had been transported to another era. Peering into the windows of the once grand Goldfield Hotel, we spotted an old switchboard, an ornate safe that once protected valuables and an old elevator that carried guests to its upper floors. We also couldn’t suppress the creepy feeling that more than pigeons now occupy its old floors.

Goldfield and the other historic sites we’d visited made us want to see even more, so we headed west into California to Bodie State Historic Park. Goldfield may be the “Queen of the Silver Camps,” but Bodie, with its dozens of buildings and furnishings caught in a state of arrested decay, is surely the “King of Western Ghost Towns.”

The interior of the Bodie Hotel, like so many other buildings in town, looks as if it was simply abandoned.

We passed through spectacular Mono Basin and skirted Mono Lake, turning off at Bodie Road, a dirt washboard that shook our insides for 10 long miles.

After parking and leveling the coach in the park’s small, dirt RV parking area, we joined crowds of tourists exploring the 170 remaining buildings (5 percent of the original number) of this once bustling boomtown. At one time, Bodie had a population of 10,000 plus livery stables, a fire department, gambling halls, a school, a gas station, two jails and 65 saloons.

The town was also deadly. Bodie had such a violent reputation that when the parents of one young girl decided to move there in 1879, the girl wrote in her diary, “Goodbye God, we’re going to Bodie.” Today, visitors can buy T-shirts with that saying in the park’s gift shop.

One of the eerie aspects of Bodie is that it appears residents simply left, leaving behind artifacts, furniture – even clothing. In the livery stable, old sleds and wagons stand ready to be hitched to teams. In the saloon, poker chips and whiskey bottles litter tables. In the town’s gymnasium, rings hang from the ceiling and punching bags await young men in search of a workout. In the schoolhouse, the reading lesson is still visible on the chalkboard.

While there are 170 buildings in the ghost town of Bodie, it’s only a small fraction of the number when the town had 10,000 residents.

As I headed down from the cemetery, my sister rushed toward me, wide-eyed and breathless.

“I saw it,” she said. “It was just a flash, but I saw a ghost flit by when I looked in the window of that old house!”