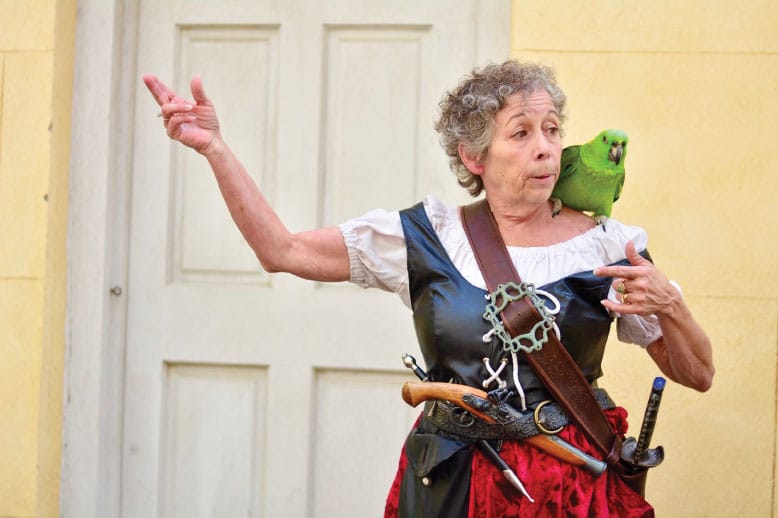 It is our first morning in Charleston, and our tour guide, Sabrina, is outfitted in a pirate costume with a live parrot perched on her shoulder, as she leads us through the historic downtown area. We quickly realize that this sort of spectacle is not uncommon in Charleston, which Sabrina informs us is “a drinking town with a history problem.”

We are from the Northeast, and at first glance Charleston reminds us of Boston and Philadelphia, teeming with historical sites, public forums frozen in time and a vibrant modern culture that has blossomed alongside the monuments to our early national heritage. But then the differences start to emerge, and we realize that instead of learning about Colonial Puritanism of the North, we are experiencing the culture of Merry Ol’ England transported to the New World.

With a parrot for a partner, a swashbuckling tour guide explains the role pirates played in Charleston’s colorful past.

The Charleston Pirate Tour is a perfect introduction to the Holy City, a moniker earned by the many church steeples that pierce the skyline. The tour guides tell us they are the result of extensive religious freedom offered in the formative years of the city. Charlestonians tell us it’s because locals need lots of opportunities to repent for their sins.

We find out over the course of the next few days that Sabrina isn’t the only wonderful tour guide in Charleston.

In fact, the city prides itself on maintaining high standards for licensing, requiring extensive training, a written test and continuing-education courses. By the end of our two-hour walking tour, the historical stage is set. We understand the role pirates played in Charleston, from providing affordable, much-needed goods in the early years to terrorizing the residents.

Then we learn about the darker side of early commerce in this city. Tucked away on one of Charleston’s few remaining cobblestone streets is the Old Slave Mart Museum, where imposing iron gates are set against the quaint architecture of Chalmers Street. There are not many artifacts in this museum, but the exhibits help us form a more complete picture of early Charleston, the capital of the slave trade in America, where 40 percent of enslaved Africans arrived.

Our first walking tour grounds us in the sights and sounds of this vibrant city, giving glimpses of the iconic St. Philip’s Church, the Pineapple Fountain and the Dock Street Theatre. But our next tour raises us above ground level, when we hop on a Palmetto Carriage ride at the Big Red Barn around the corner from the historic City Market, where we just strolled the length of four blocks looking longingly at hand-woven sweetgrass baskets that are far out of our price range. However, our three young boys walk away with the perfect souvenirs — carved wooden croaking frogs and hooting owls.

So now we take a load off and relax while Shaun, our carriage-tour guide, leads his team of horses down to the Battery, where antebellum homes look out over the seawall toward Fort Sumter, Castle Pinckney and Fort Moultrie in the distance. Seven historic house museums offer public admission and various guided and self-guided tours. We don’t have time to go inside any of them on this visit, but Shaun gives us a good primer on the unique features of each, noting the spiral staircase in the Nathaniel Russell House and the wide piazzas on the south side of the Edmondston-Alston House. We take notes for our next trip, which we are already planning in the back of our minds. 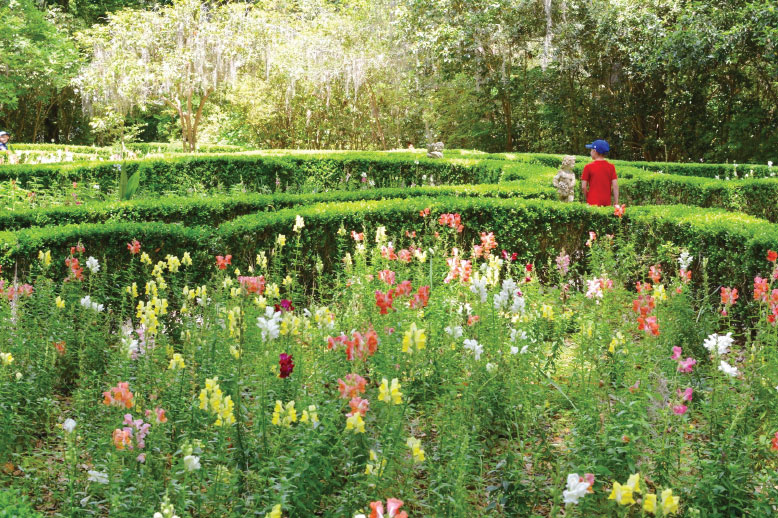 The grounds are the star of the show at Magnolia Plantation and Gardens,
established 100 years before the signing of the Declaration of Independence.

Magnolias may be one of the most best-known restaurants in downtown Charleston, painting itself as an early player in the culinary renaissance that has swept through the city. We plan on dining here, looking forward to the fancied-up version of low-country cuisine. Our timing is off, however, and the lunchtime crowds drive us directly across East Bay Street to Poogan’s Smokehouse, where we finally taste firsthand what all the fuss is about with Charleston and its food.

The house-made buffalo pork rinds, served with crumbed blue cheese and pickled celery, tell everything you need to know about Poogan’s — namely, that its trendy twists on traditional dishes might leave you never craving the original again. Pork-belly sliders come topped with a kimchee slaw, and pimento cheese fritters are served with a side of smoked tomato and bacon jam.

We learn more about this new crop of restaurants on Bulldog’s Upper King Street culinary tour. Once considered the less-desirable part of town, King Street was rebuilt after Hurricane Hugo devastated the city in 1889 and has become a hub of restaurants and boutiques.

It’s here we savor the best chicken wings we have ever tasted, at Smoke BBQ, served by chef Roland Feldman, who started his culinary career by purchasing a retired Spam vehicle and turning it into a food truck stationed on James Island. Apparently, we are not the only ones to feel so strongly about Roland’s wings. During our visit, he wins Best Smoked Wings at the Lowcountry Wingapalooza. 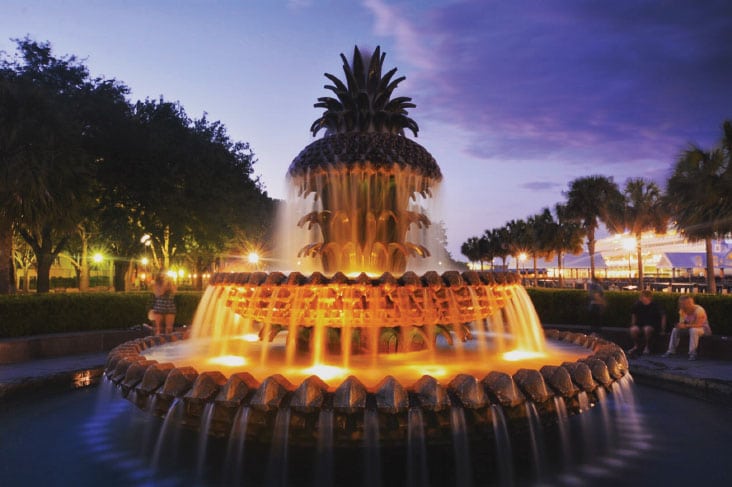 Sieges, Slavery and Raising the Flag

We could tour and eat our way through downtown Charleston for the rest of our vacation, but somehow, we pull ourselves away to explore the historical treasures located outside the walled city.
Fort Sumter and Fort Moultrie are highlights of our visit, although in retrospect, we wished we had visited Fort Moultrie first, since views of the Charleston Harbor, the downtown skyline and Fort Sumter set the scene for much of the history we have been soaking up.

The stunning cable-stayed Ravenel Bridge takes us over the Cooper River to Mount Pleasant, and from there we cross onto Sullivan’s Island and head directly to Fort Moultrie, built to guard the Charleston Harbor at the beginning of the Revolutionary War. The British held the fort during the Siege of Charleston in 1780, and it changed hands from the Union to the Confederacy during the Civil War.

We find layer upon layer of history here, discovering that this coastal defense was in continuous use by the military for 171 years. Our boys particularly delight in the range of firepower on display, and they leave quoting statistics about cannons and rifles. 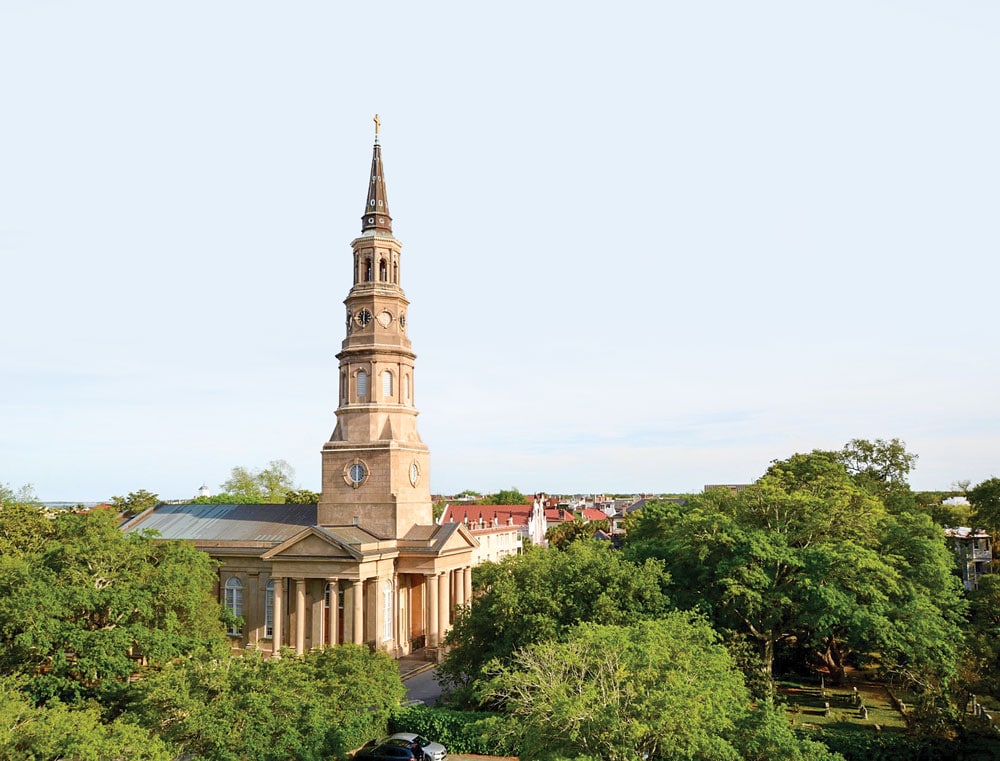 One of more than 400 houses of worship in what has been called “the Holy City,” St. Philip’s Church is a National Historic Landmark with three Tuscan porticoes in its distinctive 1850 steeple.

After a self-guided exploration of Fort Moultrie, we head toward Sullivan’s Island Beach, often called an African Ellis Island because it was the reception point for hundreds of thousands of slaves brought to America in the 18th and 19th centuries. We enjoy our day at the beach here, splashing in the shallow waters and watching dolphins swim by, but we struggle to imagine what this landscape must have looked like hundreds of years ago at the height of the slave trade.

The only memorial to this historic location is the Bench by the Road, placed next to Fort Moultrie and facing out toward the Intracoastal Waterway. The bench was dedicated by Nobel Prize-winning author Toni Morrison in 2008 and secured by the National Park Service.

Fort Sumter, where the first battle of the Civil War was fought, is a bit trickier to visit, involving a ticketed ferry ride from either downtown Charleston or Mount Pleasant. After chatting with the reservationist by phone, we learn that the 9:30 a.m. ferry is best for two reasons: It is usually the quietest tour of the day, and we will be able to participate in the morning flag-raising ceremony. Later, our whole family agrees that this is one of the more memorable moments of our visit to Charleston.

After raising the flag and saying the Pledge of Allegiance, we are free to wander about the fort for an hour before returning to the mainland. There are more cannons to explore and dolphins to spot, and once again, our boys are in their glory.

And then there are the plantations.

As with the house museums and historical sites, there are almost too many to choose from, and we debate endlessly about the topic before settling on a visit to Magnolia Plantation and Gardens. Here the grounds are the star of the show, and we are delighted with the hour-long tram ride, which covers hundreds of acres of the sprawling plantation and gifts us with dozens of views of alligators.

We wander for hours around the house gardens, enjoying one photo op after another on the bridges and in the gazebos. Since we are traveling with our children, a stop at the petting zoo is mandatory. There the boys make fast friends with sociable deer, goats, turkeys and ducks.

Another important destination requires a trip out of the downtown area, and that is the Early Bird Diner, which nestles in between car dealerships and shopping strips on Route 17, the Savannah Highway. We have been reveling in the new tastes of Charleston, the rarified version of low-country cuisine, but now we are in search of the real deal, the most traditional presentations of chicken and waffles, biscuits and gravy, buttermilk pancakes, and shrimp and grits. And we certainly find it, along with some of the friendliest service imaginable.

Our waitress and some nearby locals weigh in, giving us recommendations for our order. We follow their directions and wind up eating one of the best breakfasts of our lives. On the last day of our trip, the boys chant the name of this tiny restaurant, begging for just one more order of Early Bird Diner pancakes.

In the end, we don’t give in to their demands. We have a long drive home and get on the road as early as possible. It is quiet and solemn in the truck as we pull the trailer out of Charleston, then the chatter begins. Our boys make lists of favorite places, debate best moments and activities. They proclaim James Island County Park the best campground ever, and tell us they can’t stand to leave. We never imagined when we arrived a week earlier that this Southern city in coastal Carolina would become one of our favorite family destinations.

HOLLYWOOD
Lake Aire RV Park and Campground
Only 15 minutes from downtown, this 35-acre Good Sam Park has a private fishing lake, a playground and an outdoor swimming pool.
843-571-1271 | www.lakeairerv.com

MOUNT PLEASANT
Mount Pleasant/Charleston KOA
On the grounds of a former plantation, this well-situated KOA has a large lake, boat rentals and a nature trail.
843-849-5177 | www.koa.com/campgrounds/mount-pleasant-charleston

To find more places to stay, go to  www.goodsamcamping.com.

In addition to contributing to Trailer Life, Jeremy and Stephanie Puglisi are writers for RVFTA.com and hosts of the RV Family Travel Atlas podcast. They are also the authors of Idiot’s Guides: RV Vacations. The couple spends as much time as possible exploring the country in a toy-hauler travel trailer with their three very energetic sons and Maggie the Camping Dog.