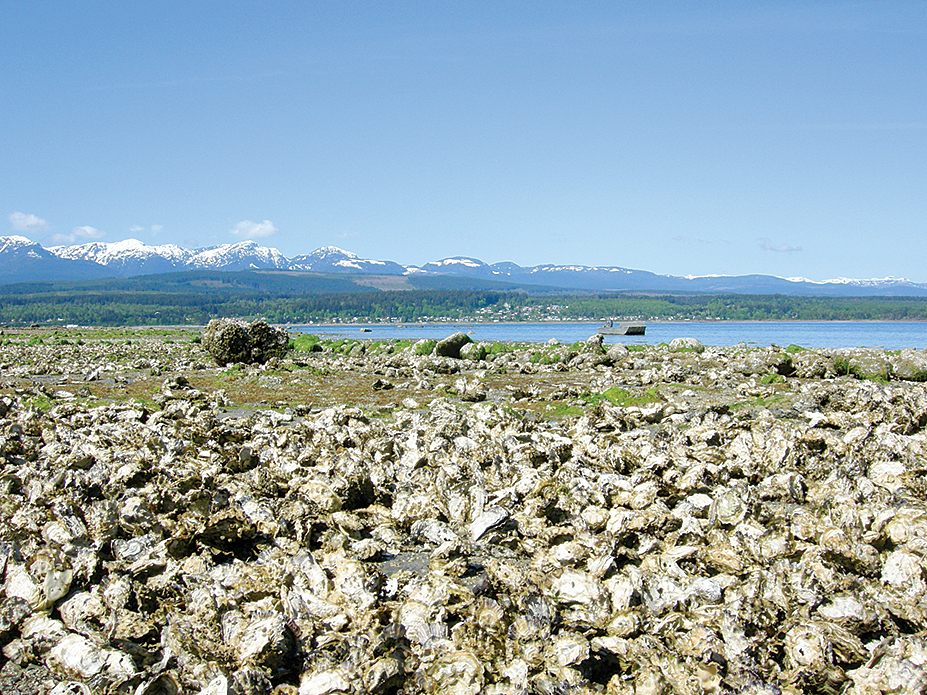 As full-time RVers from Canada, my wife, Sandy, and I have spent the past seven winters in the sunny climes of the Southwest, usually at RV resorts in Arizona. We always look forward to reuniting with fellow RVers we’ve met over the years and, of course, visiting the various attractions near the resort. Time passes quickly, and come springtime, we begin to plan our leisurely travels north.

Most of our recent summers have been spent on British Columbia’s Sunshine Coast (see “Follow the Sun to British Columbia” in the July 2014 issue). Since we had pretty much seen and done everything within that area, the time had come to consider a new location, with new attractions, to spend the upcoming summer. A logical choice was the province’s Comox Valley, midway up the eastern side of Vancouver Island. We knew some folks who had moved to the valley from other parts of Canada, and they had only positive things to say about it — plus, it’s only a short ferry ride across the Strait of Georgia to visit friends on the Sunshine Coast.

Baynes Sound flows next to the seaside hamlet of Fanny Bay, famous for its beach-cultured oysters.

Our route north had us departing on a ferry from Anacortes, Washington, spending a few hours admiring the natural beauty of the San Juan Islands and arriving at the port of Sidney near the southern end of Vancouver Island. From there, it takes about three hours to drive north on Provincial Highway 19 to the Comox Valley.

If you’re an RVer planning to visit this area, keep in mind that ferry fees for a sizable RV can be expensive, so you wouldn’t necessarily want to bring your RV for just a short trip. But why would you? As we discovered, there is so much to see and do within the Comox Valley that we barely scratched the surface during our four months there.

Down in the Valley

Our first stop was the Vancouver Island Visitor Centre, just off Highway 19 on the way to Courtenay. When I asked the friendly clerk what we absolutely had to see if we were just there for the weekend, she immediately replied, “Comox Marina, Goose Spit and Mount Washington.” When I then told her we were actually there for the entire summer, we ended up with an armful of brochures and booklets, covering everything from arts to wildlife (the writer in me wishes there were zip lines here!).

The valley’s indigenous people, now known as K’ómoks, called the region the “land of plenty.” Abundant animals and plants allowed them to thrive here for thousands of years before Europeans arrived in the mid-1800s. By the early 1900s, a railway line from the provincial capital of Victoria was extended north to the Comox Valley, and the city of Courtenay was established. Courtenay proudly celebrated its centennial during our visit last summer with parades, hoopla and a museum exhibit.

The town of Comox and the village of Cumberland are also nestled in the valley between the majestic Beaufort mountains and the expansive Strait of Georgia. Denman and Hornby islands, and several rural communities add to the mosaic of things to see and do in the valley. With a population of nearly 70,000, the area has had one of the fastest growth rates in British Columbia during the past five years. No doubt contributing to that statistic is its moderate year-round climate, alpine-to-shoreline geography, endless recreational opportunities and the friendly folks who live here.

One of the best ways to learn about an area’s history is to spend some time in a museum. Exhibits at the Cumberland Museum and Archives emphasize coal mining, which drew early settlers to the Comox Valley. The Comox Museum shows a more extensive timeframe from the early exploration of Vancouver Island through to modern times. For those seeking additional information, the Courtenay Museum and Palaeontology Centre displays locally found skeletal remains of prehistoric reptiles, while the Comox Air Force Museum showcases the history of Canadian military aviation.

A handout from the visitor center lists eight full-service campgrounds within the valley, ranging from beachfronts to forests (see “Comox Valley Campgrounds” on page 54). Our choice was Cape Lazo RV and Campground, just minutes from downtown Comox and no more than a half-hour’s drive from anywhere in the valley.
Proximity to the Strait of Georgia gave us opportunities to search the shore for intricate shells and that oh-so-perfect beach stone, while seagulls and herons scoured the water’s edge for their own tidbits. This waterway, named by 18th-century explorer Captain George Vancouver, serves as a conduit for migrating whales and salmon, as well as cruise ships sailing the Inside Passage to and from Alaska.

Just up the road, Canadian Forces Base Comox operates routine flights of military aircraft, including Hercules transports, search-and-rescue helicopters and air-cadet training gliders, which often shifted our gaze skyward. As a bonus, we were able to watch aerobatics at the annual air show from our campsite — on a lounge chair while enjoying a cool one!

More than 60 miles of designated hiking trails are available throughout the valley, most of which can be biked as well. From energetic treks through alpine wilderness to leisurely strolls within local parks, there is something for everyone.

Our favorite, conveniently located near our campground, is a half-mile circular trail in the Northeast Woods-Lazo Marsh Conservation Area. A canopy of towering firs and cedars looms over the sun-dappled trail, flanked by waist-high ferns and emerald salal bushes. Here, plucky chickadees feed on seeds from an outstretched hand, and redwing blackbirds flit among the cattails. For more ambitious nature lovers, miles of well-marked trails lace the adjoining second-growth forests, north and south of the marsh. 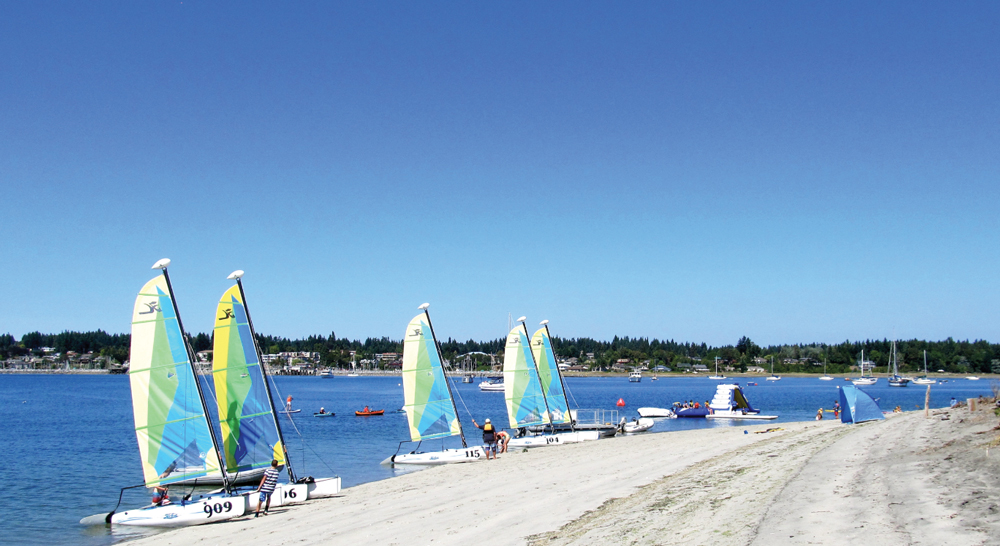 At the regional park near the tip of Goose Spit, sails punctuate the sky along the popular beach.

Just south of Comox, the narrow Goose Spit peninsula extends more than a mile into the ocean. While serving as the summer training center for the Royal Canadian Sea Cadets, it also provides one of the valley’s most popular sandy beaches. At low tide, one can hike to the tip and back along 2½ miles of gently sloping shoreline. Near the tip, recreational boaters often gather to enjoy the fine white sand and relatively warm surf near a makeshift tiki hut. Sea Cadet sailing regattas frequently occur just offshore.

Bird watchers appreciate the mudflats on the lagoon side of the Spit where sandpipers, oystercatchers and other shorebirds are common. Several tables are available for those who want to observe these avian picnickers while enjoying their own snacks.

Nearby Mount Washington is a mecca for winter skiers, as well as for summer hikers and bikers. We particularly enjoyed a guided walking tour of pristine Paradise Meadows where our expert guide pointed out alpine plants and animals, including friendly gray jays and raucous ravens. Not to be missed is the scenic chairlift ride to the mile-high summit, offering spectacular views of the Beaufort Range and the Strait of Georgia. On a clear day, Mount Baker in northern Washington can be seen in the distance. 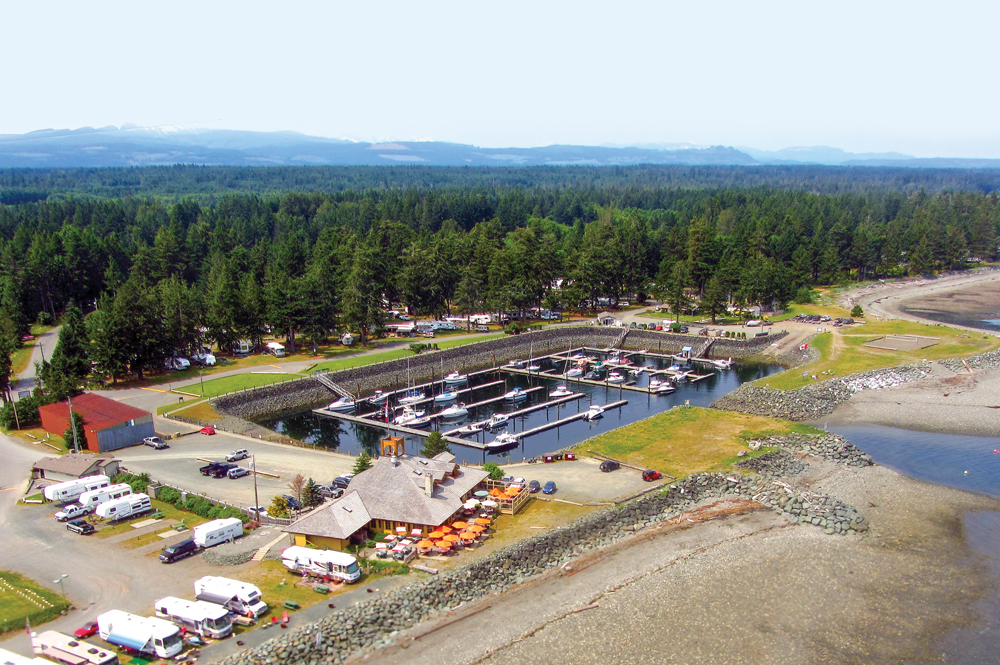 A short drive beyond the Comox Valley’s northern boundary, Salmon Point Resort welcomes RVers to the town of Campbell River.

“Comox by the Sea” is an appropriate slogan, considering the town overlooks the world-class Comox Marina, a popular stopover for visiting boaters. We often strolled along the extensive pier, admiring the many luxury sailboats and motor yachts at the docks. From the pier are views of Goose Spit, the Beaufort mountains and Comox Glacier. Whether it’s purchasing freshly caught seafood directly from local fishermen at the dock or renting a kayak, paddleboard, catamaran or even a cruising yacht, you can find it here.

Kayaks and paddleboards can be rented at several other locations within the valley, including our campground. During one sunset paddle in the Courtenay River estuary, we got up close and personal with harbor seals and bald eagles. Fishing charters, whale-watching tours, scuba-diving excursions and boat cruises are all available, and booking them in advance is recommended during summer.

Art galleries and studios that sell unique paintings, carvings, handcrafted pottery and jewelry are scattered throughout the valley. Many of these items, as well as locally grown produce, are on display at weekly farmers markets in the valley’s urban centers, as well as on Denman and Hornby islands. On several occasions, we visited these enchanting islands by ferry to take in a self-guided art tour, nibble on all things blackberry at an annual festival and frolic in the temperate aquamarine waters of Tribune Bay, nicknamed Little Hawaii. For those seeking traditional First Nations artwork and crafts, many examples are on display and available for purchase at I-Hos Gallery between Courtenay and Comox. 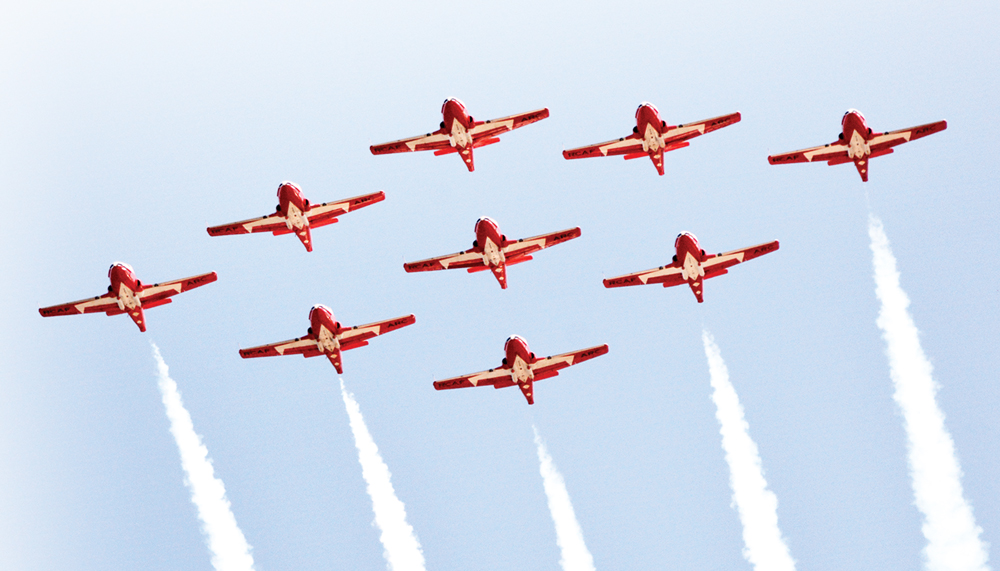 Canada’s counterpart to the Blue Angels and Thunderbirds, the Canadian Forces Snowbirds wing over the Comox Air Show.

The Comox Valley is known as the Valley of Festivals for good reason. In addition to Comox’s popular Filberg Festival, which features music, food and art from more than 100 artisans, other festivals celebrate everything from jazz, seafood and authors to bluegrass, dance and mushrooms, to name a few. Another fun one is the Comox Nautical Days Festival, just two blocks from the Filberg Festival and staged at the same time — on the first Monday in August (British Columbia Day) and the weekend that precedes it. Watch nautical demonstrations and competitions, and shop at more than 100 arts-and-crafts booths.

If winemaking can be considered an art, several vineyards in the valley are intent on producing a Rembrandt. Fertile soil and a moderate climate have contributed to the production of internationally acclaimed, award-winning wines, and the best part is, tastings are free.

Were we ever bored? Not a chance, although occasionally we managed to simply relax beside our trailer, recharging in preparation for the next adventure. The valley has many more ways to play, including golfing, tubing, windsurfing, rock climbing and lawn bowling — the list goes on. Last July’s What’s On Digest for Comox Valley listed multiple events occurring nearly every day, so there’s no excuse for boredom in this land of plenty. We’re joyfully anticipating our return visit this summer.

The Comox Valley is said to be Canada’s sixth warmest region, and the valley’s campgrounds are busy during summer, when the days are warm enough to enjoy an outdoor swim but not unbearably hot. If you plan to visit in July or August, consider making reservations in advance.