Call of the Wild Animals: Traveling to Great Congregations 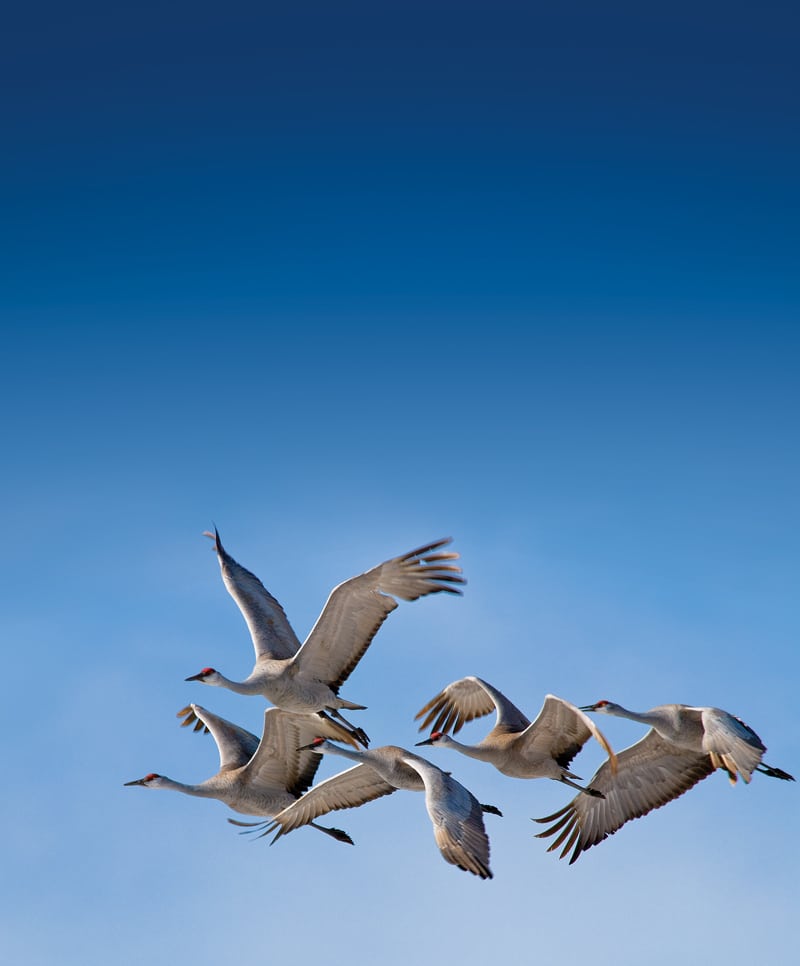 Watching animal life in the wild is always amazing, but recently I realized that seeing large numbers of animals, great congregations of them, is even more of a thrill. Take, for instance, sandhill cranes. They migrate in the thousands and can be viewed in many places throughout the country, including Colorado’s San Luis Valley where my husband, Mike, and I live.

Believe it or not, there are actual terms for great numbers of animals. For instance, the name for a group of elk is a gang. Giraffes form a tower, porcupines make a prickle, and seals form a pod or herd. Birds in general make a flight when they are in the air and a flock when they are on the ground. Some specific groups of birds have their own terms. For instance, cranes make a sedge, eagles form a convocation and geese make a gaggle.

Regardless of what you call them, seeing large numbers of animals in any one place is an awesome experience, and it gives you a great excuse to choose a destination for your next RV adventure.

One of my most beloved places is right here in the San Luis Valley in southern Colorado. We live on the western edge of a humongous valley with an average elevation of 7,500 feet. Every spring and fall more than 20,000 sandhill cranes visit the area around Monte Vista National Wildlife Refuge to feed and rest.

Sandhill Cranes in flight, some of planet’s oldest birds.

In fact, there are so many sandhill cranes that the town of Monte Vista offers a festival in early March in celebration of the birds. (The 29th annual festival will be March 9-11, 2012; check out www.cranefest.com for more information.) In the spring, the cranes fly north to their breeding grounds in the greater Yellowstone area. In the winter they go south to New Mexico’s Bosque del Apache National Wildlife Refuge, where they join thousands of snow geese, making the Bosque another favorite place of mine.

Mobile Manor Overnite Park is the closest RV accommodation. Located on the west side of Monte Vista, the park has water and electricity, but no restrooms. Call (719) 852-5921 for more information. While in the region you may want to camp at Great Sand Dunes National Park and Preserve: (719) 378-6300; www.nps.gov/grsa. A must-see, the park is located about 50 miles to the northeast.

View sandhill cranes from a photo blind within the Rowe Sanctuary.

Crane Your Neck In Nebraska

While on the subject of sandhill cranes, I have to mention the Platte River area near Kearney, Nebraska. One spring Mike and I traveled to the Platte and actually spent a night with thousands of sandhill cranes. We rented a photo blind from the Audubon Society, and while Mike slept I snuggled deep into my sleeping bag and listened to the cranes call and fly overhead.

Cranes are one of the planet’s oldest living birds. Fossil records prove that cranes have been in what is now Nebraska for more than 9 million years. Spring brings 500,000 sandhill cranes to the Platte. They arrive every March and stay through early April. One of the most popular places to view them is the Iain Nicolson Audubon Center at Nebraska’s Rowe Sanctuary. Visitors can sign up for field trips to unheated viewing blinds costing $25 per person, per trip.

Great Sand Dunes National Park is a must-see in Colorado.

The best option for serious enthusiasts and nature photographers are photo blinds set very close to major crane roosting sites. Thousands of cranes landed within easy viewing of our blind; it’s normal for cranes to number up to 12,000 per half-mile. Cost is $200, with a two-person limit. Call (308) 468-5282 or visit www.rowesanctuary.org for more information.

Fort Kearney State Recreation Area is a wonderful place to camp. It’s also a great place to watch for sandhill cranes at sunrise and sunset. Spacious camping pads are available with and without electricity; a modern shower house and bathrooms are provided. Call (402) 471-0641 or visit www.outdoornebraska.ne.gov and click on “state parks” for more information.

When I was traveling as a full-time RVer, I spent much of my time in the Klamath Basin of northern California and southern Oregon. I spent many winters there, too, and for good reason. I was there to see lots of American bald eagles.

I volunteered on several occasions to count the birds at the Tule Lake and Bear Valley national wildlife refuges. At Bear Valley the birds are counted as they leave their night roost. One day between 7 and 9 a.m. I counted 369 bald eagles. Another time while at Tule Lake I counted a total of 480 eagles — more than 400 from one point alone. Both were moments in time I will always remember.

The Klamath Basin is home to the largest wintering concentration of bald eagles in the Lower 48 states. In December, a steady stream of bald eagles begins migrating into the region in search of food and shelter; by mid-February there are up to 1,000 eagles present (though the average is about 500 birds). By March, all but the permanent residents have left, heading north. The Winter Wings Festival coincides with the eagles’ peak. Visit www.winterwingsfest.org for more information.

The 43-site Indian Well Campground at Lava Beds National Monument is a nice place to stay in winter. You’ll find water and modern restrooms, but no utility or sewage hookups. Call (530) 667-8113 or visit www.nps.gov/labe/index.htm. If you’d rather stay in Klamath Falls, check out Klamath Falls KOA  at (541) 884-4644 or koa.com/campgrounds/klamath and/or Oregon 8 Motel & RV Park (541) 883-3431 or www.oregonmotel8rvpark.com. Both are open year-round.

Although I love birds, I thoroughly enjoy seeing all kinds of animal life. I marvel at everything from tiny spiders to humongous snakes, comical penguins to soaring eagles, and hungry polar bears to enormous, slug-like elephant seals. In fact, one of my favorite places to see northern elephant seals is to spend time at California’s Piedras Blancas.

Journey along the California coast in your RV and you’re bound to see wildlife. On a recent trip, Mike and I saw an assortment of gulls, shorebirds, sea otters, sea lions, harbor seals and gray whales migrating south to Baja. But we were closest to a massive herd of elephant seals hauled out on the beaches near San Simeon.

Sea otters play in the waters of Morro Bay.

There’s nothing like observing a huge group of elephant seals. They are fun to watch whether they’re sleeping, fighting, flipping sand up on their bodies to cool off, moving their huge blubbery bodies on shore or nursing their pups. The herd is a potpourri of sights and sounds. We visited in late December and saw pregnant cows, cows with newborn pups and bulls patrolling the beach, proclaiming dominance with booming threats and nips at each other.

One of the best things about the elephant seals at Piedras Blancas is that they are easy to view. Just drive up in your RV and you’re there. Better yet, get out and walk the boardwalk that parallels the beach for safe and easy viewing.

Although you may see elephant seals at Piedras Blancas anytime of the year, the action really begins in November. Swimming in from the cold waters of Alaska, where they spend the summer, the enormous males are the first to come on shore, establishing territories. Adult males are humongous creatures with blubbery bodies stretching up to 16 feet long, rough crusty necks and floppy noses that give them their name. The big males fast while they are on the beach, so that means they are without food from November through February. Weighing as much as 5,000 pounds in November, the males may lose as much as 40 percent of their weight by February.

Females weigh from 900 to 1,800 pounds. As they come on shore the dominant males assemble harems of 30 to 40 females and wait for their chance to breed. The females arrive after an equally long migration, ready to fast, give birth, nurse their baby and mate. Raising a pup is hard work. The mother nurses the 60- to 80-pound (when it is born) pup for a month, supplying milk with a 50 percent fat content. The pup is weaned in four weeks and may weigh 300 pounds when its mother leaves it. The cows then mate and head back to Alaska to feed, leaving their pups on the beach. They have to learn to swim and eat on their own.

Hearst San Simeon and Morro Bay state parks are the best places to stay while you explore. You’ll find developed sites at both parks. Call (800) 444-7275 for reservations or visit www.parks.ca.gov for information.

Wyoming Bugling And Beyond

The National Elk Refuge in Wyoming is a more recent discovery for the two of us. Not long ago Mike and I visited Grand Teton National Park in winter and made several visits to the refuge.

Located just southeast of the park, the 24,700-acre refuge is a haven for animal life. Thousands of elk summer in the Greater Yellowstone Ecosystem, the largest essentially intact natural area in the contiguous United States. In the winter, anywhere from 5,000 to 8,000 elk gather at the refuge. Home to the largest elk herd in the world, the area also supports a large herd of bison, as well as deer, moose, bighorn sheep, pronghorn and coyote, plus many small mammals and a variety of birds.

Although you can often see elk from the highway, your best bet for seeing them up close is to sign up for a sleigh ride. On a minus-17-degree morning we bundled up and joined some others for a ride; we all smiled when we were handed warm blankets to drape over our laps. Two draft horses pulled the sleigh out on the refuge. Our guide told stories as we made our way. It was an awesome experience to be so close to the elk — in our case, a herd of bull elk — with the magnificent Tetons in the background. Purchase tickets at the Jackson Hole Greater Yellowstone Visitor Center in Jackson. Open 9 a.m. to 5 p.m. daily, sleigh rides operate from 10 a.m. to 4 p.m. and are closed Christmas Day.

For information call (800) 772-5386 or visit www.fws.gov/nationalelkrefuge If you want to spend time in the area, please note that in winter all Grand Teton campgrounds are closed, but you can park your RV near the Colter Bay Visitor Center for a small fee. Primitive winter camping exists, which means you will be camping on the plowed but snow-covered parking lot.

For full amenities, check out Grand Teton Park RV Resort, (800) 563-6469; www.yellowstonerv.com, which is open year-round and is located 6 miles east of Moran Junction.