A towering figure in American history, media magnate William Randolph Hearst built a mansion in the sky that was just as audacious as he was. Now a historical landmark, Hearst Castle recalls the high society of its heyday nearly a century ago

Weekend getaways rarely have 115 rooms furnished with museum-worthy art, 42 bathrooms, 30 fireplaces, a private airport, the world’s largest private zoo, an indoor pool that would do Julius Caesar proud and a guest book signed by anyone who was anyone almost a hundred years ago. And that doesn’t include the three guest “cottages” with another 20 bedrooms. All of this in a small village on the central California coast, far from any center of influence or commerce. When one gazes up the hill from sparsely populated State Route 1 and sees the anomaly at the top, even mere mortals are inspired to eloquence.

William Randolph Hearst was a larger-than-life character who dominated the nation’s consciousness during the latter part of the 19th century and early part of the 20th. Although born to privilege, he didn’t let that deter him from becoming even richer and more successful in his own right.

Here was a man who amassed the largest newspaper and magazine business in the world, was a two-term U.S. congressman, was the primary inspiration for the leading character in Orson Welles’ film masterpiece Citizen Kane, may or may not have fomented the Spanish-American War, and ultimately left us with access to a country home whose over-the-top opulence raises the question, could this place be replicated today? Not likely.

And his legacy lives on. The privately held Hearst Corporation remains a publishing empire, with marquee names like Esquire, Car and Driver, Road & Track, Cosmopolitan, Good Housekeeping, Town and Country, Elle, Harper’s Bazaar, Seventeen and more, to go with other media interests like A&E, ESPN (both jointly held with the Walt Disney Company) and an impressive portfolio of daily and weekly newspapers.

Hearst grew up the son of a wealthy San Francisco businessman. When his parents shipped him off to Harvard, he got to show his mischievous side, sending his least-favorite professors chamber pots with their names inscribed on the bottom. Although that and other excesses got him expelled, he parlayed a brief tenure as editor of the Harvard Lampoon into a media career by convincing Dad to turn over the reins of the San Francisco Examiner, which was said to have been acquired as settlement for a gambling debt.

While perhaps somewhat lacking in the political-correctness department, Hearst proved to be a pretty astute businessman. At the Examiner he proceeded to hire the best writers he could find, like Mark Twain, Ambrose Bierce and Jack London. Within a few years, he dominated the San Francisco market and headed east to test his mettle in the most competitive market in the world, New York.

With support from his mother, this time he bought the ailing New York Morning Journal and adopted a business model that in short order made his paper the place to work. Higher pay and front-page bylines helped, as did his human resources’ mission statement, which said he was indulgent of “prima donnas, eccentrics, bohemians, drunks or reprobates, so long as they had useful talents.”

And then there’s the camping connection. As a youth Hearst had spent considerable time at a property his father had acquired over time near San Simeon, just south of Big Sur. Originally about 48,000 acres, the family’s holdings grew over the years, eventually exceeding 250,000 acres. While they had built a home as a retreat overlooking the ocean, what the Hearsts enjoyed most was tent-camping at the crest of a hill above it: They called it Camp Hill.

Upon inheriting the property at the age of 56, Hearst relished the opportunity to replicate his youthful adventures atop the hill, but with a difference. While visiting his architect, Julia Morgan, in her San Francisco office, he was overheard to remark, “We are tired of camping out in the open at the ranch in San Simeon, and I would like to build a little something.”

His first thought was to construct a rustic retreat on the site where tents once stood. And perhaps what he built could accommodate a growing collection of art, antiques and one-of-a-kind collectibles from around the world. And then there were the legions of friends he wanted to spend time with. Where would they stay in an area with no accommodations? With the essentially unlimited funding that his business success could provide, that rustic retreat soon morphed into something entirely different. And that is an understatement of monumental proportions.

In the old days, say, before 1962, there was a saying that behind every good man was a good woman. (We now know from experience that it’s a better woman, and she’s in front.) Hearst’s business partner in his quest to build something suitable for his needs was the diminutive Morgan, an accomplished and respected architect with an immense talent. With a degree in civil engineering from the University of California-Berkeley, she was at the time the first female graduate of the prestigious École des Beaux-Arts in Paris. Really wealthy people often like to hog the limelight, but rarely is what was later accomplished here discussed without both Hearst and Morgan being mentioned. One had the money and a unique vision, the other had her own vision and the talent to blend the two and make it happen. Hearst had no problem sharing the glory.

The first shovel hit the dirt in 1920, and except for the World War ll years, construction continued for 28 years. Although never quite “finished,” the mansion you see today is nothing short of amazing. A visitor can’t help but consider with awe the foresight required to design and build this place in this setting, the amount of money spent to get it done, the artisan talent required to do the work and the audacity of the whole thing. 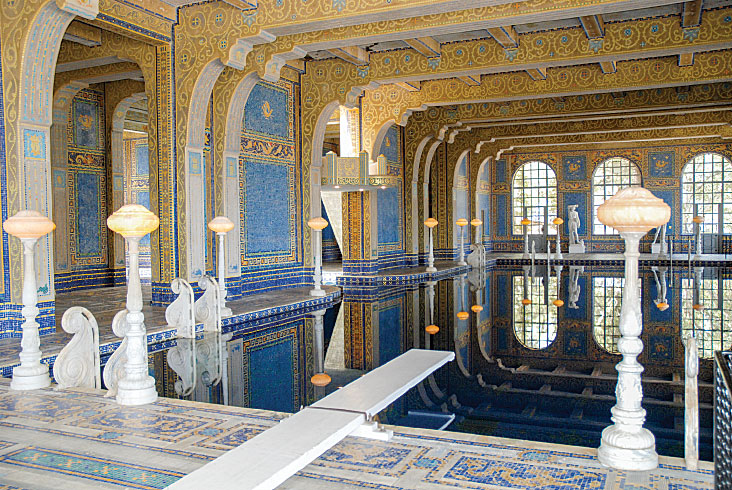 The Hearst family rarely referred to the place as a castle, preferring to call it La Cuesta Encantada (the Enchanted Hill), but more often, simply “the ranch.” There is the main house, and then there are the three guesthouses. Suffice it to say that if any of these guesthouses were relocated to your neighborhood, your real-estate values and property-tax bill would escalate significantly.

Without overloading you with facts, Hearst and his wife, Millicent, separated during construction, as the former had taken up with Marion Davies, a movie actress and his companion for more than 30 years. They were well connected in Hollywood and elsewhere, and enjoyed hosting all manner of famous folks at Hearst’s various properties, from Calvin Coolidge and Winston Churchill to Howard Hughes, Hollywood celebrities like Greta Garbo and Cary Grant, and tennis great Bill Tilden — caught on film rallying with Charlie Chaplin — and the list goes on.

To quote Davies on this subject, “At the slightest drop of a hat, any occasion at all, we would say, let’s make a costume party. Carloads of people would arrive, and musicians, extra chefs and all that sort of thing. It was really fun.”

Nothing lasts forever. After Hearst’s death in 1951 at age 88, the property was donated to the State of California by the Hearst Corporation and is now officially known as Hearst San Simeon State Historical Monument, managed by the California Department of Parks and Recreation.

A visit takes a little planning. Four guided tours focus on different areas of the property: the Grand Rooms Tour, the Upstairs Rooms Tour, the Cottages and Kitchens Tour, and the Evening Tour. Tickets can be purchased online, by phone or in person.

With ticket in hand, you board a bus that travels from the visitor center at the base of the hill to the castle grounds, a 5-mile uphill jaunt. From there you are joined by a tour guide and led through your chosen tour for about an hour. You cannot deviate from that tour, and you need to remain on a special carpet so as to not damage the “real” carpeting, which is usually a priceless oriental variety. Flash photography is prohibited so as not to damage the tapestries, paintings and other museum-quality furnishings that are everywhere.

The guides are well trained and do a good job making the tours interesting. Once your time is up, you are free to wander on your own through the hilltop’s extensive gardens, until closing time if you wish. Buses that run every 10 minutes or so take you back to the starting point. If you signed up for more than one tour, you remain on the grounds and are advised how to rendezvous with your next guide.

Throughout history, there have been people who lived on a scale so beyond the pale as to be almost otherworldly. In the United States, we have our Vanderbilts, Rockefellers, Morgans, Gettys, Astors and a handful of others. At or near his peak in the 1930s, Hearst was ranked the 37th richest American by Fortune magazine, which still puts him in pretty impressive company.

You can read about the lifestyles of the rich and famous, and look at old photos and paintings, but in few places can you stand in one place and feel what it might have been like. This is one of them.

Camping Near the Castle 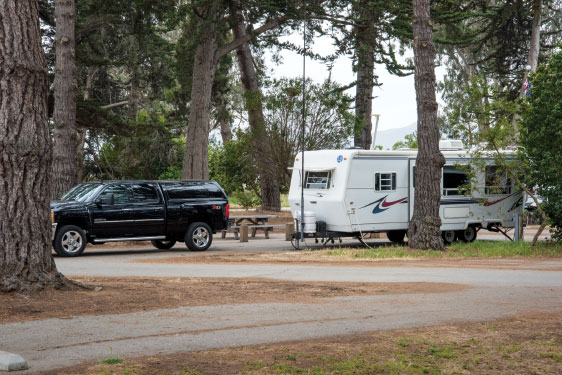 Getting back to reality after a trip to Hearst’s hilltop mansion, there are a few things that RVers might like to know. The closest camping is about 5 miles distant at Hearst San Simeon State Park. California is still experiencing a drought, and the park’s two public campgrounds, San Simeon Creek and Washburn, have greatly curtailed water usage, to the detriment of the camping experience. Those who like public campgrounds but value restrooms with hot showers and flush toilets should consider driving south to Morro Bay State Park. These types of water restrictions haven’t affected most of the region’s privately owned campgrounds, some of which are listed below. To find more RV parks, visit www.goodsamclub.com/findacampground.