California’s Castle on the Hill 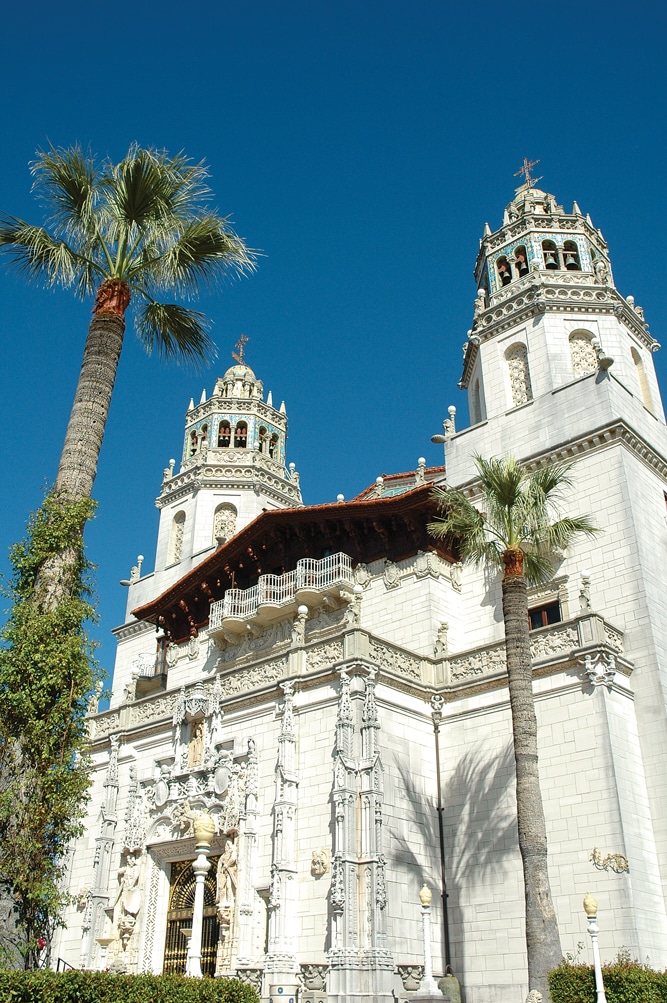 “The Ranch,” as newspaper magnate William Randolph Hearst called it, is open for public tours and showcases a considerable collection of art and antiques

It was 1850 when George Hearst arrived in California. Like many, he had gold fever, but he also had a degree in mining. Making his fortune with the Comstock Lode in Nevada, Homestake gold mine in South Dakota, Ontario silver mine in Utah and Anaconda copper mine in Montana, he soon became one of the wealthiest and most influential men in California.
At that time, roads to the remote coast south of Monterey were almost nonexistent. It wasn’t until 1850 that the horse trail between San Simeon Point and Mission San Luis Obispo de Tolosa was expanded to allow the use of small carts, and then only seasonally. The first white persons to settle in the immediate area near the bay of San Simeon were Portuguese shore whalers under the command of Captain Joseph Clark. They built a small wharf where they could tie up their dead whales. The public land was open to homesteading.

The imposing Casa Grande or “Big House” is but a small part of the Hearst Castle Estate.

In 1865, George Hearst began to accumulate land along the coast adjacent to San Simeon where he began raising cattle and racehorses. In 1869, Captain Clark partnered with George Hearst to build a wharf out on the end of the point so sailing ships could tie up to load and unload goods. Soon there was a store, a blacksmith shop, a barbershop and a saloon. Sailing vessels and steamships stopped at San Simeon to deliver freight.
George and his wife, Phoebe Apperson Hearst, had one child, William Randolph Hearst, born in 1863. The Hearst family frequently camped, hunted and fished in the rolling hills overlooking the blue Pacific and along the rugged coastline. As a young boy, William fell in love with these grasslands and forests of oak and Monterey pine. Extensive travels in Europe with his mother gave him a deep appreciation for art he saw in the well-preserved castles and mansions. Upon his mother’s death, William inherited the ranch property.
Taking time out to build the largest newspaper and magazine business in the world, the land William Hearst called “La Cuesta Encantada” (“The Enchanted Hill”) kept drawing him back until 1919 when he enlisted the services of world-renowned designer and architect Julia Morgan to build what we know as Hearst Castle.
The design and construction of La Cuesta Encantada would continue until 1947. Being the art connoisseur that he was, both before and during the construction of Hearst Castle, Hearst had stockpiled a massive collection of original art, statues, furniture, paintings, tapestries and all sorts of rare artifacts from all over the world. These were stored in warehouses in New York, San Francisco and San Simeon. The Mediterranean-Revival-style home houses a selection of art and antiques that truly boggles the mind.

Piedras Blancas Light Station and its historic buildings are undergoing a process of restoration.

As his dream home evolved under the watchful eye of Morgan, Hearst established landscaped gardens and a private zoo on the property. Descendants of some of the animals, including zebras, can sometimes be seen today grazing on the green hillsides. During the 1920s and 1930s famous guests arrived at this magnificent country house by car, train and airplane.
We didn’t have an airplane so we arrived in our own self-contained RV. While we prefer to wild camp, a little searching showed that there were virtually no possibilities anywhere near the entrance to the Castle. The best and only spot is San Simeon Creek Campground, 4 miles south of Hearst Castle. There are 115 campsites for tents and recreational vehicles. The maximum length for an RV is 35 feet. Each campsite has a fire ring and picnic tables. Water spigots are available throughout the campground, but there are no hookups. Restrooms with flush toilets and coin-operated showers, a dump station and water fill for RVs are also available. There is an upper section of the campground called the Washburn Loop that has no access to flush restrooms or showers. If you’re self-contained, this is a much nicer and quieter place to stay. You can buy firewood from the camp host but you’re better off bringing your own. When we awoke in the morning, there was a covey of quail doing clean-up around our camp.

The castle’s grand halls, party rooms and dining room are beyond imagination, each a museum in itself.

From October 1 through March 14 the campground is open on a first-come first-served basis. During high season it fills up very quickly and you are better off making reservations far in advance (available May 23 to September 12).
The entrance to Hearst Castle has a large parking area specifically for RVs. It did not seem to be a problem for people leaving their trailers or motorhomes in the parking area while using a tow vehicle or tagalong to visit other nearby attractions. Overnight parking is not permitted.
There are five castle tour options. Tour number 1, “The Experience,” is recommended

Every bedroom and sitting room has its own personality.

for first-time visitors. Each tour lasts about an hour and 45 minutes. At the end of your tour you are free to wander the beautiful gardens surrounding the estate. If you really want to see it all you should plan on two days. Tours fill up quickly so get there early and make a plan.
The main house or Casa Grande is 69,000 square feet and contains 115 rooms. It took 26 years to build and was never completed. There are numerous outbuildings and cottages, each named for their view: Casa del Mar (House of the Sea), Casa de Montaña, (House of the Mountains), etc. Wandering through the gardens, we marveled at the beautiful sculptures. Four Sekhmet Egyptian sculptures are more than 3,000 years old. The Neptune pool, named for the Roman god of freshwater and the sea, holds 345,000 gallons of water. From the Neptune Terrace we had an expansive view of the 240,000-acre ranch William Hearst owned.

Camping in the Washburn Loop of the San Simeon Creek Campground was serene.

We could go on and on about the incredibleness of the castle, but it is just one of those things you have to experience to believe. Like chocolate and candy, you can only consume so much in one day before overload.
There are many other things to see and do in the area. We drove north early the next morning to explore what is easily one of the most dramatic coastlines in the world, now part of the California Coastal National Monument. Our first stop was the Piedras Blancas Elephant Seal Rookery just 4.3 miles north of the entrance to the Hearst Castle Visitors Center off Highway 1. The rookery is home to about 17,000 animals, and is open for viewing everyday of the year with no admission fee. The number of seals peaks three times during the year: late January, when most births have occurred, and in late April and late October, but the seals are always coming and going.
Another 1½ miles north is the entrance to the Piedras Blancas Light Station. In 2008 it was designated by Congress as an “Outstanding Natural Area.” Built in 1875, it filled the gap between Point Conception and Point Sur. Access to Piedras Blancas is by guided tours only, which are offered year round and feature cultural and natural history as well as spectacular scenery. Tours meet at the Piedras Blancas Motel 1½ miles north of the entrance. (Check locally for days and times.) The guided walk around the point along the ½-mile interpretive trail is a great place to spot a few gray whales heading south (October through December) to their protected calving and mating grounds on the coast of Baja California, or north, heading back to Alaska (April through June). Depending on the season, ashy storm petrels, pigeon guillemots, Xantus’s murrelet and Brandt’s cormo­rants can seen, as well as ever-present western gulls and brown pelicans.

There are numerous outbuildings and cogttages, each named for their view.

Heading back south, we stopped at the San Simeon State Park and the Hearst San Simeon Historical Monument. Together, they preserve more than 20 miles of dramatic central California coastline. It was lunchtime so we popped into the old general store, the only building dating back to San Simeon Station’s whaling days. The deli had tempting sandwiches but the line was long. After sampling a couple of the vintages at the Hearst Ranch Winery’s tasting bar we bought some bread and cheese and joined others on the front porch in the sun.
On a tip from the Hearst San Simeon Historical Monument Visitors Center, we walked down the beach and found the trail leading to San Simeon Point. The path wanders through a forest of fragrant blue gum eucalyptus, Monterey pine and cypress draped in Spanish moss. On the hike back, we watched kayakers gliding into the calm coves beneath the rocky cliffs of the point. Kayak rentals and lessons are available on the beach. A few anglers were testing their luck on the wharf. We heated up a cup of coffee and stayed for the sunset before heading back to camp.
Mr. Hearst was a man of many talents and he certainly left his mark on California. He died in 1951 before he could see the completion of Casa Grande on La Cuesta Encantada. The Hearst Corp. donated the estate to the State of California in 1957, and it is now a State Historical Monument and a National Historic Landmark. The Hearst Conservation Easement today includes 80,000 acres. William Randolph Hearst just called it The Ranch.

Elephant seal breeding, birthing and molting take place on this beach in San Simeon at the Piedras Blancas Rookery, which is open every day of the year.