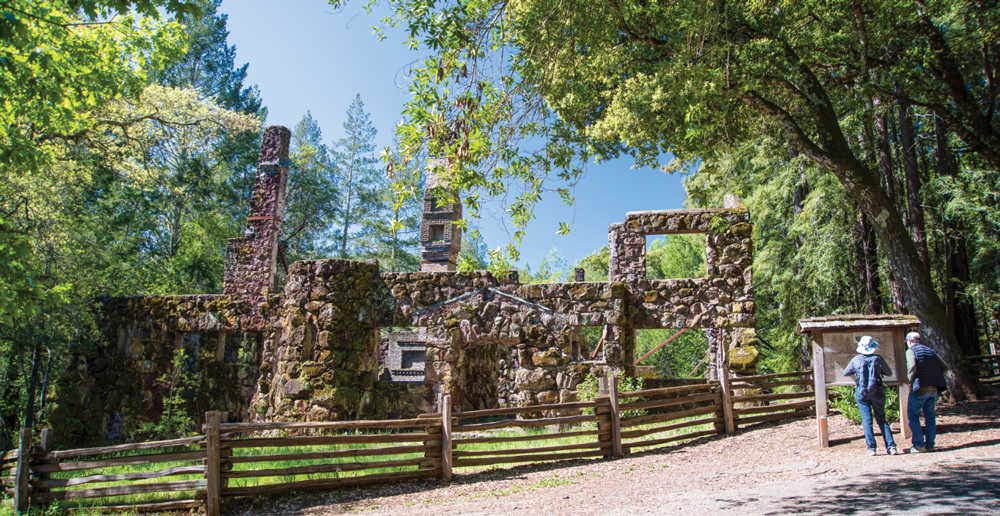 Trailer Life readers are adventurers. To varying degrees, certainly, but adventurers, nonetheless. Whether we read about destinations and travel there vicariously or actually load up the RV and go, we love the great outdoors, seeing new places and making new friends.

We had a kindred soul in Jack London, the great American writer and adventurer who died 100 years ago at the age of 40. Although London’s passing isn’t a cause for celebration, his life is, and a good way to commemorate it is by visiting his home outside the village of Glen Ellen in Northern California’s Sonoma County. London, who traveled the world to places both wild and civilized and could have made his home anywhere, loved this place best.

When London and his second wife, Charmian, settled into what they called Beauty Ranch in 1905, London was already rich and famous, and wanted to try his hand at farming. Starting small, he acquired about 40 acres, eventually adding more until the ranch encompassed 1,400 acres. After his death in 1916, Charmian continued to live there until she died in 1955. In 1959 some of the property, including the couple’s homestead, was deeded to the State of California by London’s nephew. Later acquisitions brought total state holdings close to the original acreage.

The 15,000-square-foot, four-story Wolf House had 26 rooms and nine fireplaces, and was built of unpeeled redwood logs and lava rock to better survive a fire. Nevertheless, the home burned to the ground in 1913, a month before the Londons were to move in.

Beauty Ranch is now Jack London State Historic Park, and it’s a good place to start a centennial exploration of London’s life and times. The park sits in the Sonoma Valley, also known as the Valley of the Moon, which stretches between the cities of Santa Rosa and Sonoma and is bisected by State Route 12.

THE TIMES OF LONDON

Jack London was born in San Francisco in 1876 of impoverished parents, his mother, Flora Wellman, being of a mystical bent and fond of séances. Neither London nor historians were ever able to confirm his father’s identity, although his mother claimed it was astrologer William Chaney. Later in 1876, they moved to nearby Oakland, and Wellman married John London, who was a kind man but frail from a lifetime of physical labor. As a result, his adopted son found it necessary to help provide for the family by working in factories and other low-paying jobs, starting at the age of 14.

London’s attempts at garnering a formal education were obstructed by the need to work, so he was largely self-taught. That lifestyle led him to become an outspoken socialist, as all capitalism had offered were long hours, little pay and exploitation by his bosses. After working in a pickle cannery for 10 cents an hour, London borrowed money to buy a sailboat and tried his hand as an oyster pirate, raiding corporate-owned oyster farms and eluding the authorities employed to catch him. That profession taught him to be an expert sailor, a skill that would serve him well in later years.

By 15, when other teenagers were sitting in classrooms, London was carousing and drinking with men twice his age and learning that only the tough survive. At 17 he became an able-bodied seaman on a three-masted schooner and endured a raging typhoon that served as the basis for his first story written for public consumption, Typhoon on the Coast of Japan. 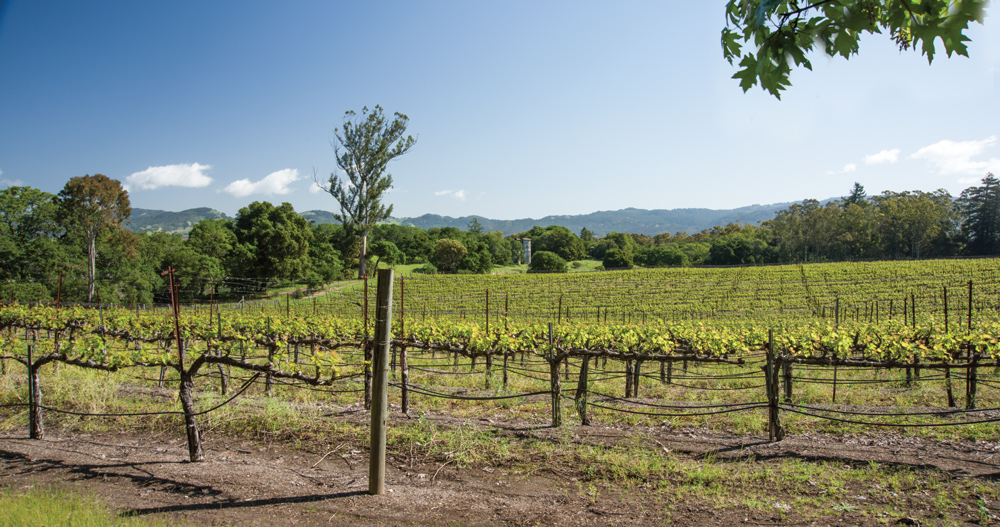 London didn’t consider growing grapes a profitable business, but much has changed, and his heirs now cultivate several red varieties on land he once farmed.

At 18 London was imprisoned for vagrancy. At 19 he was given his first toothbrush, an important development because his neglect of dental hygiene had caused embarrassment and may have contributed to the ailments that would haunt him later in life.

At 21 London traveled to the Klondike region of northwestern Canada and spent a year mining for gold, bringing home about $5 worth but having experiences that inspired his 1902 story “To Build a Fire” and launched a writing career that was without equal in his day. 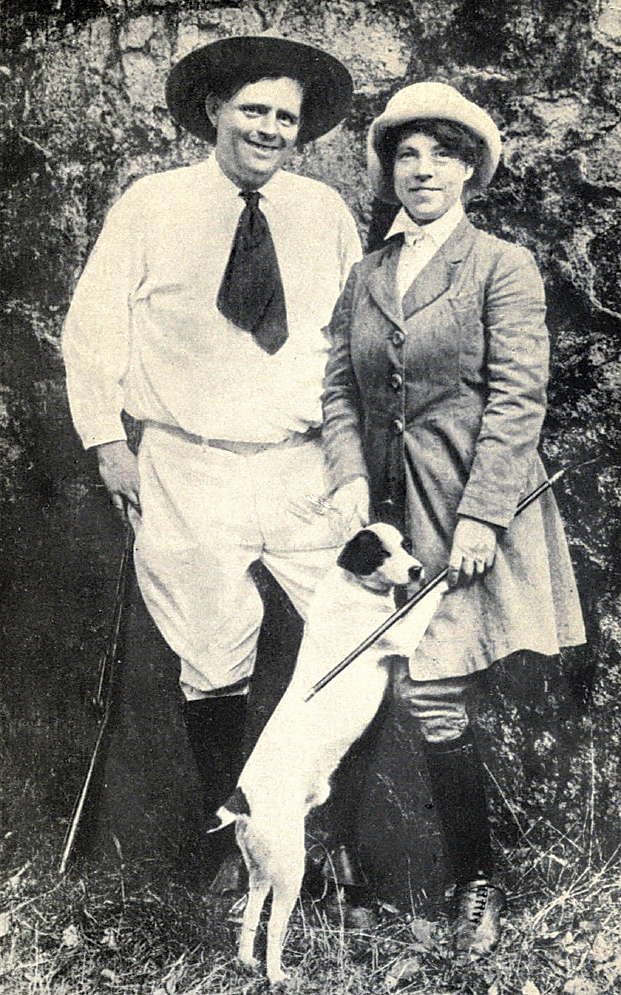 Jack and Charmian London posed at Beauty Ranch with their dog, Possum, shortly before London’s death in 1916.

Publication of The Call of the Wild in 1903 and The Sea Wolf in 1904, after their serialization in the Saturday Evening Post and The Century Magazine, respectively, cemented London’s stature as the most popular writer then working. In 1904 he covered the Russo-Japanese War for the San Francisco Examiner, and in 1906 he reported on the devastating San Francisco earthquake for Collier’s. At one point he was earning about $10,000 per month. All of this merely touches on a life lived to the fullest.

VALLEY OF THE MOON

London married Charmian and bought their property in Glen Ellen in 1905. He proved to be a serious farmer and soon thought of his writing as a way to support that profession. Rising early, at about 5:30 a.m., he wrote 1,000 words before stopping to eat and starting chores on the farm. The Londons lived in a cottage while making plans to build their dream home, to be called Wolf House after London’s nickname.

In 1907 the couple set off on what was to be a seven-year sail on his sloop, the Snark, a trip that was cut short after two years because of health issues, a harbinger of things to come. In 1913 Wolf House burned to the ground a month before he and Charmian were to move in, and on November 22, 1916, London passed away in Charmian’s arms in their cottage at Beauty Ranch.

The best place to start a tour of Jack London State Historic Park is the House of Happy Walls, a beautiful stone structure that Charmian built to live in after London’s death and now serves as a museum and visitor center. It is filled with souvenirs from London’s travels and exhibits that detail his literary exploits. Photographs, manuscripts, first-edition books and more will enthrall the enthusiast. 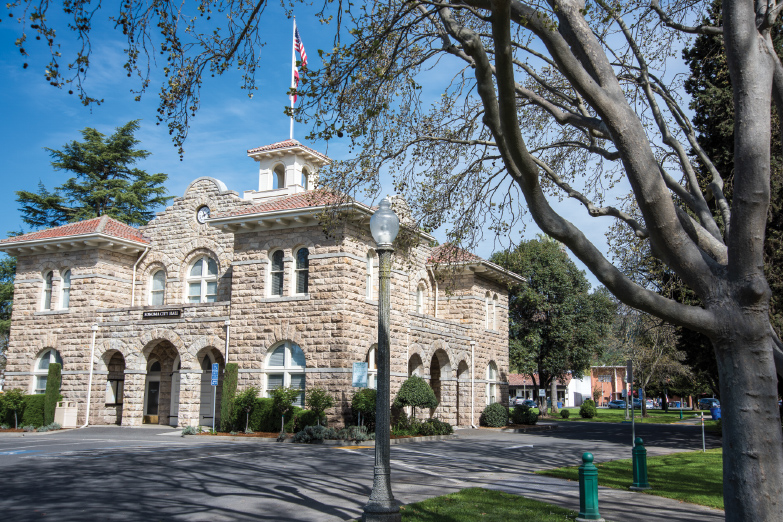 Outside, an easy half-mile trail leads to the remains of Wolf House and the site of London’s grave. His headstone is a lone lava boulder collected for but never used in the Wolf House construction. Charmian’s ashes were scattered nearby.

About a mile away are the remains of the farm and the London cottage, which looks and feels like a place a writer would enjoy. London eschewed things mechanical, using draft horses for power and housing them in stone outbuildings that still stand. He raised Duroc pigs in what he called the Pig Palace, a facility he designed to be clean and efficient. Two silos also remain, along with what was once a winery that London used as living quarters for his help and guests.

AT HOME IN SONOMA

London loved Northern California’s Sonoma Valley and went so far as to name a 1913 novel The Valley of the Moon. Rolling hills enclosed what was then farmland depleted by poor agricultural practices that London had committed to rejuvenate and are now given over to significant plantings of wine grapes not unlike those in neighboring Napa County.

The two oldest commercial wineries in California are situated here, just outside the town of Sonoma. Buena Vista Winery was established in 1857, and Gundlach Bundschu in 1858. Both still produce wine and are worth a visit. Throughout the valley, small-scale organic farmers satisfy the needs of increasingly picky consumers.

The community of Sonoma is a local jewel, one of those destinations that inspires guidebooks to invoke superlatives. Do an online search for “California” and “charming,” “romantic” or “foodie,” and Sonoma will likely appear near the top. But there’s a lot of history here, too.

At the start of the European colonization of the West, Mexico was part of the Spanish empire, including what was then known as Alta California. As part of its colonization efforts, Spain established a series of 21 Franciscan missions, and Sonoma’s Mission San Francisco Solano was the northernmost of them.

When Mexico gained independence, it closed the missions and appointed Mariano Guadalupe Vallejo, then in charge of the San Francisco Presidio military base, to administer the job. At the same time, Mexico was concerned with the increasing incursion of Russians at nearby Fort Ross and Bodega Bay, and decided to boost its military presence north of San Francisco. Thus, in 1835 the pueblo of Sonoma was established.

In 1846 Sonoma became the site of the Bear Flag Revolt when a small group of Americans “captured” the town, took then-General Vallejo into custody and declared the establishment of the California Republic. The republic was short-lived but presaged what
was to come.

After his influential career, General Vallejo retired in Sonoma to write a five-volume history of California. Two of his homes and Mission San Francisco Solano are now part of Sonoma State Historic Park, another wonderful place to visit in Jack London’s Valley of the Moon.

Both a state historic park and a national historic landmark, Jack London’s Beauty Ranch is open to the public from 9:30 a.m. to 5 p.m. daily, except Christmas. The park’s 1,400 acres include the House of Happy Walls Museum, Jack and Charmian London’s cottage, the Wolf House ruins, the Pig Palace and 29 miles of hiking trails. Guided tours of the ranch, museum and ruins are given on weekends. The park is located in Glen Ellen, about 20 miles north of Sonoma and 50 miles north of San Francisco.

As part of this year’s centennial celebration, Jack London State Historic Park and the Sonoma Community Center have partnered to stage the Jack London Classic Film Fest, November 3 through 5, showcasing three memorable film adaptations: The Call of the Wild (1935), The Sea Wolf (1941) and White Fang (1991). Screenings take place in Andrews Hall at the Sonoma Community Center.

Jack London and Sonoma state historic parks don’t offer campsites, but the surrounding area has plenty of RV parks and state, county and regional campgrounds that do. 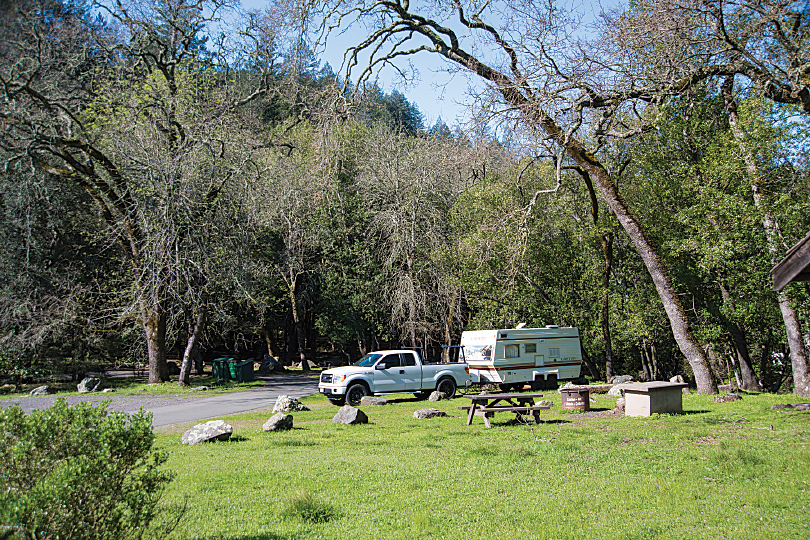 Despite its location in the heart of Sonoma Valley wine country, family-friendly Sugarloaf Ridge is an alcohol-free state park and campground.