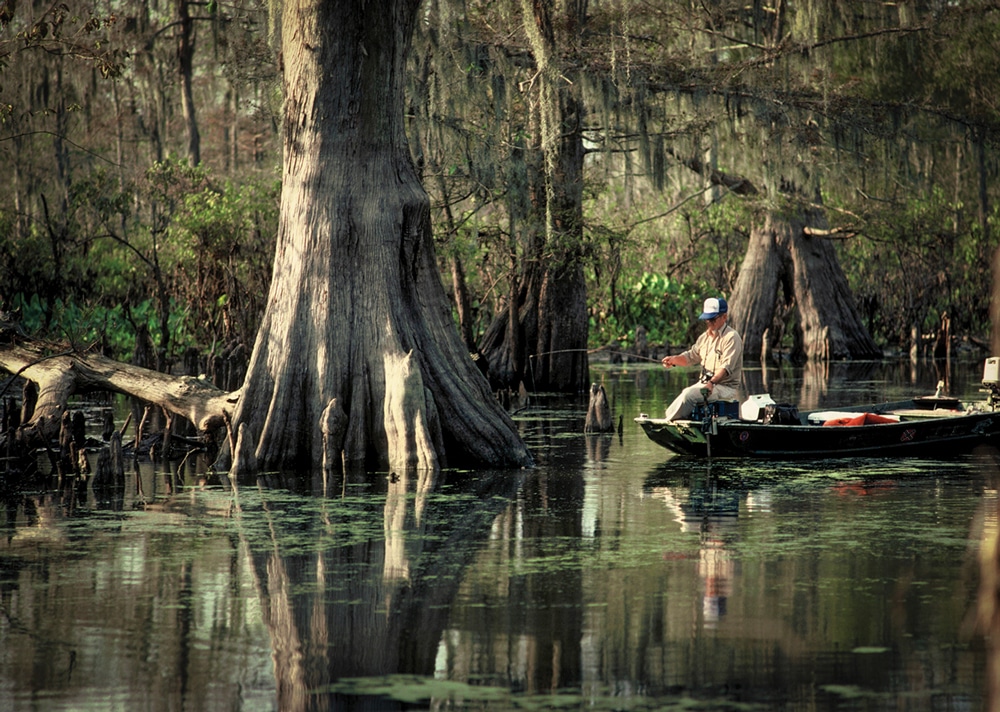 Good reasons abound for paying a visit to Louisiana — touring, gaming, hunting, fishing, boating and birding, to name a few. But regardless of what brings you to the Pelican State, it is food — that tangy, tasty mix of Creole and Cajun cooking — that will steal the show. Take my visit there last fall, for example, when I pulled the Winnie into Lake Charles for the purpose of poking about on the Creole Nature Trail All-American Road.

Fishing is great in the swamps and bayous of Louisiana’s Outback.

While it wasn’t quite lunchtime as I approached Lake Charles from the west on Interstate 10, I was enticed enough by an appetite-inducing string of Cajun eateries to exit and seek out a snack in the neighboring community of Sulphur, aptly named for the mineral once mined there.
Nothing satisfies such an urge better than boudin (say boo-dan in Cajun). Louisiana’s favorite finger food, it is a sausage of sorts made up of pork meat (some recipes include liver), rice, onions, parsley, garlic, red pepper and other seasonings. Savoring a couple of freshly made links at B&O Kitchen and Grocery, I spoke with proprietor Jeff Benoit, who makes boudin from a family recipe created more than 50 years ago by his grandmother, Coritta.
“Boudin,” says Benoit, “follows in the tradition of most Cajun food, made up of whatever could be sourced from the soil, swamps and marshes, then mixed together and spiced up to bring out the taste.”
Well sated now and set to join the Creole Nature Trail, I drove up to the Lake Charles/Southwest Louisiana Visitors Bureau on Lakeshore Drive, just off I-10 at Exit 29, to pick up a GPS Explorer, a nifty handheld device enabling me to enjoy a self-guided video tour of the 180-mile route. Folks with smartphones can download a free app from iTunes or Google Play, but for those of us still using stupid phones, the visitor center provides the Explorer unit on loan at no charge.

There are two entrances to the trail from I-10, one east of the visitor center in Lake Charles on Highway 397 (Exit 36), and one in Sulphur at Highway 27 (Exit 20). I’d reserved a space at A-Plus Motel and RV Park, a few miles south of Sulphur on Highway 27. Intending to tour the trail (which loops around to the east entrance) in a counterclockwise direction, I backtracked to the park.
Family owned and operated in combination with a motel, this is an exceptional park, as evidenced by its Good Sam Club 10/10*/10 rating. It is meticulously maintained and loaded with amenities, including a pool and cabana, a fishing pond, a gym and recreation room, a playground and a dog run.
I settled in poolside for a quick dip and to sort out the operation of my GPS Explorer. Later, as you might guess, I returned to Sulphur for a platter of succulent boiled crabs at Seafood Palace, and then hit the bunk in preparation for a dawn departure on the Creole Trail.

The coastal swamps, bayous and marshlands along the Creole Nature Trail offer plenty of wildlife-spotting possibilities such as this gator.

One of the first routes to be designated a National Scenic Byway by the U.S. Department of Transportation in 1996, the Creole Nature Trail was reclassified an All-American Road in 2002, achieving elite status as one of just 31 such routes in the entire country.
Once beyond the interstate, this route enters a vast wilderness of fertile prairie, marshland, swamps, bayous, several National Wildlife Refuges and a pristine 26-mile stretch of Gulf Coast shoreline, often referred to as Louisiana’s Outback. The area sits at the convergence of the Central and Mississippi Flyways, and each year hundreds of thousands of migratory birds and waterfowl find it an inviting place to stop for food and rest — much to the delight of nature lovers and photographers. Fall and winter months are the peak migration period.
As a reminder, this is a lightly settled region where services are limited. So be sure you’re fueled up and check your stockpile of essentials, including water, snacks (i.e., boudin and maybe some crab gumbo), batteries, bug spray and sunscreen. There is a gas station, a couple of cafés and an RV park, which I’ll describe later, at Cameron, about halfway along the route, but not a whole lot else in the way of services.

I drove the route in one day — dawn to dusk — allowing time to take in the major highlights but not to fully experience all that there is to see and do along the trail. In retrospect, I wish I’d divided the trip into two days, overnighting in Cameron. I strongly suggest doing the same — and if you’re really into photography, shelling, hiking, biking, kayaking, hunting or fishing, you’ll need even more time.
Those planning to fish or hunt will need a license. To learn about that as well as seasons, limits and other regulations, contact the Louisiana Department of Wildlife and Fisheries at 888-765-2602 or www.wlf.louisiana.gov.
Motoring down Highway 27, the first point of real interest to me came as I crossed over the Intracoastal Waterway on the Ellender Bridge. Familiar with the waterway in my home state of Florida, I didn’t realize it continued along the Gulf Coast all the way to Brownsville, Texas, providing a vital shipping lane, which was busy with barge traffic as I passed over the bridge.

Boudin, a favorite Louisiana sausage, is served in a variety of dishes.

Not far beyond Hackberry, a commercial crabbing, shrimping and fishing outpost nestled alongside Calcasieu Lake (locals call it Big Lake, and it is that, measuring 77 square miles), is Sabine National Wildlife Refuge. You can try fishing or crabbing at a couple of recreation areas here. By all means stop for a short hike on Blue Goose Trail, which leads to an observation deck that affords great views over the marshland and is often frequented by flocks of geese and other migratory birds. At the southern edge of the refuge, Wetland Walkway provides a 1½-mile handicap-accessible walk right into the heart of the marsh. Keep an eye out, too, for alligators, which are common to all wetter areas along the trail.
Holly Beach is next, and with it comes your first look at the Gulf of Mexico. This is a great beach for picnicking, shelling, swimming and surf fishing. The beach was substantially replenished by the Corps of Engineers in the wake of hurricanes in 2005 and 2008, and is sufficiently hard-packed to allow you to drive on it. You can camp here as well, providing your rig is self-contained. From this point, an extension of the trail, the Western Spur, continues along Highway 82, where in about 12 miles you’ll encounter Peveto Woods Bird and Butterfly Sanctuary, open year-round for self-guided excursions.
Continuing eastbound on Highway 27 toward Cameron, you’ll board a ferry for a quick (and free) crossing of the Calcasieu Ship Channel, which connects the Intracoastal Waterway to the Gulf. The ferry operates continuously at roughly 30-minute intervals and can accommodate travel trailers and motorhomes of any size.

South of Lake Charles, visitors hike a boardwalk through marshland near the Cameron Prairie National Wildlife Refuge Visitor Center, a key point of interest along the Creole Nature Trail.

At Cameron, a community of about 400 hardy souls and home to a variety of services, including gas and eats, there’s an RV camping facility that I mentioned earlier. It’s located just south of Cameron proper on Davis Road and is essentially a gated limestone gravel parking lot with 37 RV spaces, each with hookups for electric and water. It adjoins a fishing pier said to be a good spot to cast for redfish, drum and speckled trout. Details and contact information for this and other referenced campgrounds are contained in the “RV Parks” box on the opposite page.
Prior to the point where the main trail (Highway 27) bends north, you’ll have the option of continuing on Highway 82, past Rutherford Beach (especially good for shelling), through the small community of Oak Grove, and along the trail’s Eastern Spur to Rockefeller Wildlife Refuge. This refuge is the scene of an extensive foundation-backed scientific study of indigenous wildlife and fauna. The Price Lake Nature Drive on the refuge is open from March to December.
Hustling northbound along the eastern leg of the trail to see as much as I could before nightfall, I happened upon what I consider to be the most engaging and informative features along the 180-mile route.
Shortly after entering Cameron Prairie National Wildlife Refuge, watch for signs on your right for the Pintail Wildlife Drive. This is a 3-mile self-guided drive on a well-kept gravel road that offers a diversity of wildlife-sighting possibilities. During fall and winter months, you’ll be greeted by thousands of ducks and geese — and most anytime by roseate spoonbills, egrets, herons, ibis and cormorants. I spotted alligators, whitetail deer and nutria (aka coypu), a large semiaquatic rodent. River otter and swamp rabbits are often seen here as well. Follow the raised boardwalk for the best viewing opportunities.

I had a chance encounter with a local fishing and outdoor guide, Captain Sammie Faulk, who was showing a group of journalists around the refuge. Turns out he helped the visitor center introduce and promote the Explorer GPS Video Tour several years ago, the script for which he said was being updated.
My final stop of the day entailed a visit to the Cameron Prairie National Wildlife Refuge Visitor Center, 3 miles north of the Pintail Wildlife Drive. The building is surrounded by a manmade pond that is home to a number of gators large and small. There’s an observation pier with a spotting scope, making it easy to safely photograph the creatures, which seem rather unconcerned about the presence of visitors.
Inside the center are a series of interpretive exhibits and a clever animatronic diorama featuring an authentic looking old Cajun couple, T’ Maurice and Tante (Auntie) Marie, who tell stories about life in the Louisiana Outback.
Exiting the trail in Lake Charles, with my mind reeling from the day’s experiences and too tired to stop for dinner (ah, but I still had some boudin and a bag of greens in the fridge), I headed to Twelve Oaks RV Park, situated in a quiet wooded area just a mile north of I-10. This is the city’s newest RV park, with all the bells and whistles, including a comfy clubhouse with a patio and outdoor kitchen, where I warmed up and consumed the last of my boudin.
Before hitting the sack, I recalled an invitation I’d filed away from the friendly ladies at the Lake Charles Visitors Bureau to join the Rouge et Blanc food and wine festival, to be staged the following day on the grounds of the city’s historic 1911 City Hall. So I rallied in the morning and attended the big fest.
While munching on a crab roll, I couldn’t help musing at the fact that my Louisiana adventure was coming to an end pretty much as it started — with me feasting on one kind of Cajun delicacy or another — this time with wine in hand. As they’re prone to say in these parts: Laissez les bons temps rouler! (Let the good times roll!)