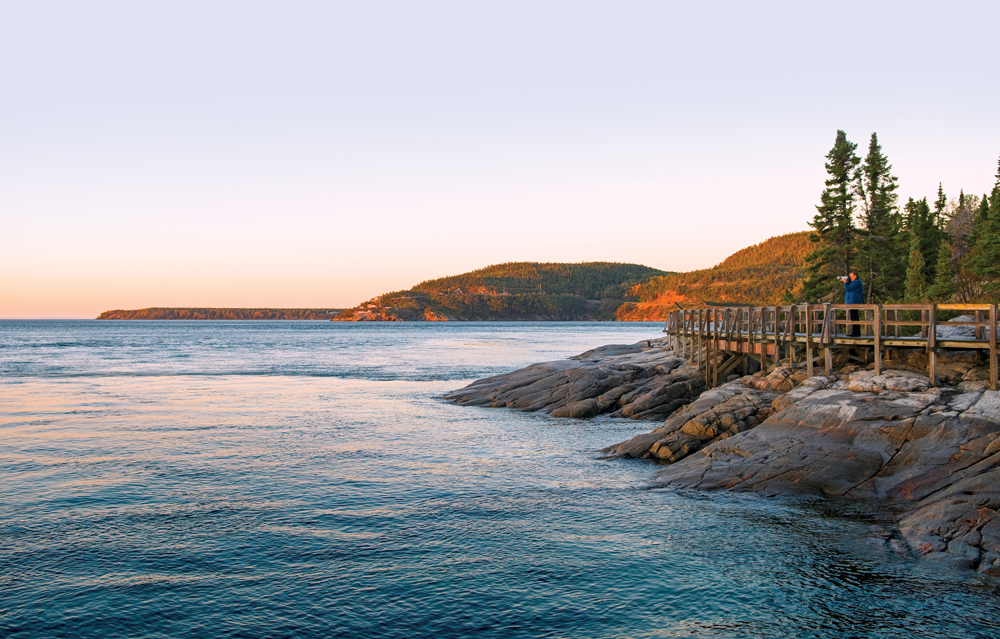 In the small towns and villages along the north shore of the St. Lawrence River, you don’t need to speak French to enjoy the scenery and feel the joie de vivre

“Seen from the ferry, a sunrise on the St. Lawrence is an awesome sight,” remarked a woman on the Gaspé Peninsula in Quebec. Our 5:30 a.m. ferry reservation from Matane would provide that opportunity while delivering us to the easternmost town on the north shore that is accessible by ferry. Parking our rig overnight at the terminal allowed an early boarding.
Unfortunately, rain and low clouds shrouded the sunrise, but the picturesque north shore more than made up for it.

The Saguenay River flows into the St. Lawrence next to the village of Tadoussac. To appreciate the area’s natural beauty ­— and possibly glimpse a whale — take a stroll along the boardwalk.

In a little more than two hours, my wife, Sandy, and I disembarked, as the sleepy little village of Godbout awakened. A right turn here, onto Route 138, takes you 340 miles along the ragged coast to Natashquan, the end of the road. We turned left toward Quebec City. Over the next eight days, we meandered nearly 300 miles through the tourist regions of Manicouagan, Charlevoix and Quebec, havens for artists and nature lovers.

Driving west to Baie-Comeau, we were treated to majestic views of the St. Lawrence River on the left and steep, verdant mountains on the right. The end of June begins summer vacation for students in Quebec, meaning things get busier, even in this relatively secluded region of the province. Had we arrived a week earlier, or been more diligent about making a reservation, we could have taken an alternate ferry from Matane directly to Baie-Comeau. But this ferry departs later in the day, which means missing the sunrise.

Our two-day stay in Baie-Comeau wasn’t nearly long enough to explore all the attractions the area has to offer, from Jardins des Glaciers (Garden of the Glaciers), an exploration of climate change that features one of the longest zip-lines in North America (1.3 miles), to a couple of world-renowned hydroelectric facilities (Manic 2 and 5) with unique designs and gigantic dimensions. After a brief stop at the tourist information bureau, we explored the downtown area’s historic buildings, art galleries and a particularly fine gourmet shop with regional cheeses and chocolates. Former Canadian Prime Minister Brian Mulroney is a native of the town.
Part of Quebec’s charm is its distinctive French heritage, spanning 480 years since Jacques Cartier dropped anchor here in 1535. We felt like we were in France with the unique architecture and street signs, menus and everyone speaking en français. Even with our very limited vocabulary, we always managed to communicate, using a few words, gestures and laughter. Everyone appreciated our attempt to do so, and we were enriched by the experience. Vive la différence!

The ferry from Matane to Godbout links the Gaspé Peninsula to the north shore of the St. Lawrence.

Departing Baie-Comeau, we continued along the well-constructed coastal highway, aptly named Route des Baleines (Whale Route). This stretch of the St. Lawrence is not a river but an estuary where freshwater from the Great Lakes mingles with saltwater from the Gulf of St. Lawrence. Beneath the surface is a deep valley extending out to sea that provides a buffet of delicacies for many species of marine mammals, making this area one of the best in the world for seeing whales, especially belugas and minkes, in their natural environment. We were surprised to learn that minor tidal changes occur as far upstream as Quebec City, still about 250 miles inland.
Our campsite at Tadoussac provided a panoramic view of the village and its expansive sand-fringed circular bay, described by an international association as one of the most beautiful in the world. A large, elegant hotel with a shiny red roof is the town’s most prominent landmark, overshadowing a replica of the first fur-trading post in Canada, established here in 1600.
Tadoussac’s Marine Mammal Interpretation Centre provides information about 13 species of whales through videos, sound recordings, giant skeletons and interesting interactive exhibits. Several operators at the marina provide whale-watching tours on the St. Lawrence and adjoining Saguenay Fjord. Or you can simply stroll along the boardwalk at the confluence of the two rivers and have the whales come to you. A local suggested, “Pack a picnic lunch with a bottle of vin and a generous supply of patience, and you’re sure to have a grand time.” We did, in spite of not having a magical encounter with a whale.

A free 10-minute ferry ride across the Saguenay River and a short drive brought us to La Malbaie in the Charlevoix region. Having read about a premier golf course draped atop a mountain, I spent an afternoon admiring stunning vistas while feigning mastery of a little white ball. The prestigious Fairmont Le Manoir Richelieu Hotel and adjacent casino offer a destination for those seeking world-class luxury amid unbridled natural beauty. 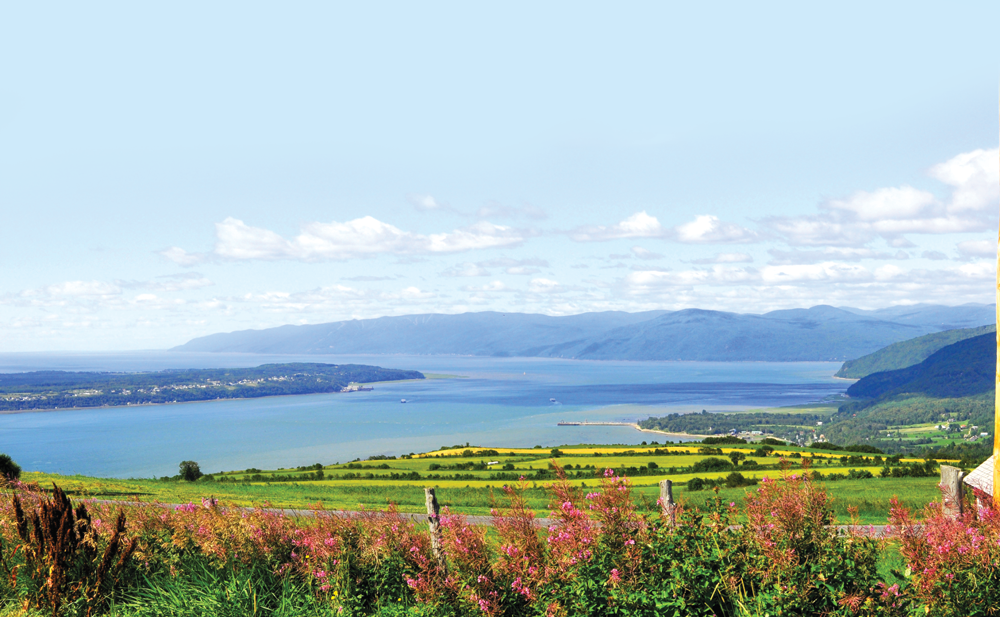 The town of Les Éboulements, which means “landslides” or “rock falls” in English, owes its name to a catastrophic 1663 earthquake that caused coastal hills to crumble into the St. Lawrence.

President William Howard Taft adored the region and once remarked that the air was “as intoxicating as champagne, yet without the hangover.” Later, we hiked to Chutes Fraser, a waterfall cascading down a rocky escarpment within our campground.
Route 362 to Baie-Saint-Paul is a narrow and occasionally steep road that hugs the shoreline, providing spectacular views at nearly every turn. Renowned as one of the most scenic drives in Canada, this 30-mile road is unsuitable for large RVs, so leave your trailer at the campground. Lovely coastal communities such as Saint-Irénée and Les Éboulements beckoned exploration. Farther along, the road dips down to the village of Saint-Joseph-de-la-Rive, where a maritime museum displays old sailing schooners that played a vital role in the economic development of this region. At one of several viewpoints, a local artist was painting pictures of a hillside, occasionally selling one of his colorful creations to admiring tourists.
Baie-Saint-Paul, one of the oldest towns in Quebec, is an artist’s paradise with its traditional French architecture and European ambience. Art galleries, craft boutiques and trendy restaurants line the narrow main street; tourists stroll about eating ice cream cones and French pastries. We lunched on the patio of a microbrewery, sampling a selection of popular beers while relishing a bowl of French onion soup. Délicieux! A bronze statue of A.Y. Jackson honors the famous Canadian painter who in the 1920s, after founding the Group of Seven, encouraged many artists to visit and capture the beauty of Charlevoix on canvas.

A nearby dairy museum at Laiterie Charlevoix enlightened us about the cheese-making process. Did you know that Canadian cows have been bred in Charlevoix since the 1600s to produce rich milk especially suited to cheese making? Neither did we, but the cheese curds were outstanding!
Returning along the main highway, we marveled at the mountainous terrain formed millions of years ago by the impact of a large meteorite, resulting in a crater that extends from Baie-Saint-Paul to La Malbaie. Our bag of curds lasted just long enough to share with our campground neighbors, who reciprocated by offering a trout they had caught in a nearby lake. Fishing, hiking, paddling and other outdoor activities in the majestic countryside are as popular as cultural pursuits. 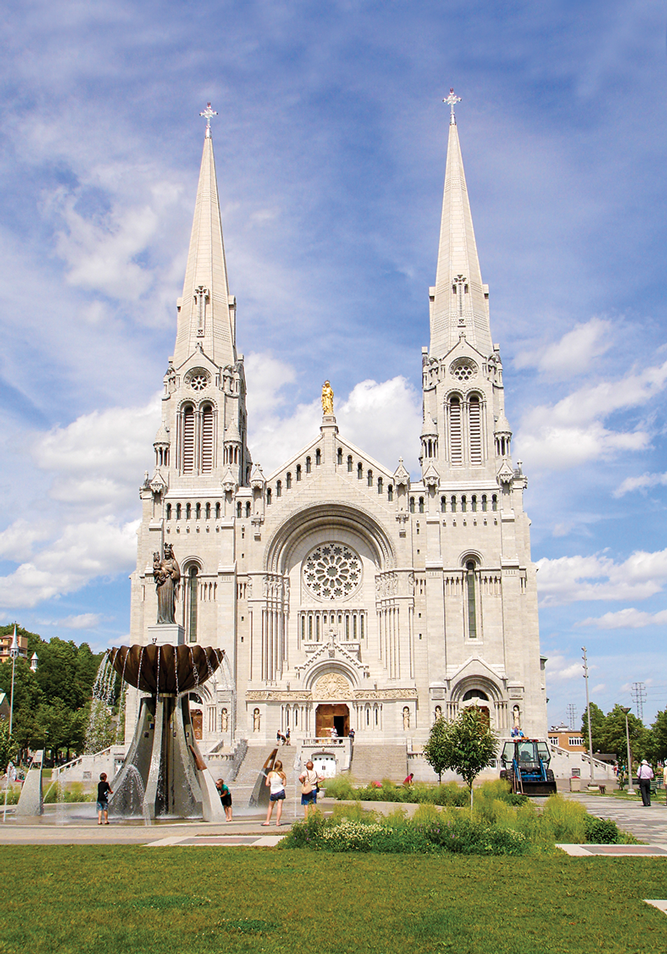 Each year almost a million people make the pilgrimage to the Sainte-Anne-de-Beaupré Shrine.

Our final two days were spent at a government campsite beside the river in Sainte-Anne-de-Beaupré. Directly across the highway is an impressive Romanesque cathedral dedicated to St. Anne, said to be the grandmother of Jesus. A tour guide pointed out the significance of the magnificent paintings, mosaics, stained-glass windows and sculptures that embellish the basilica. This renowned pilgrimage site is visited annually by nearly a million people seeking reflection and inner peace. Two walls of used crutches attest to the power of faith for some individuals.
The previous year we explored the south shore of the St. Lawrence, and on this trip it was the north shore. Both have plentiful campgrounds, a wealth of history, gracious hospitality and comfortable roads, smooth and reasonably graded. But for picture-perfect scenery, we favor the latter, even without having seen that awesome sunrise or elusive whale. Not to worry — we now have at least two reasons for a return trip. 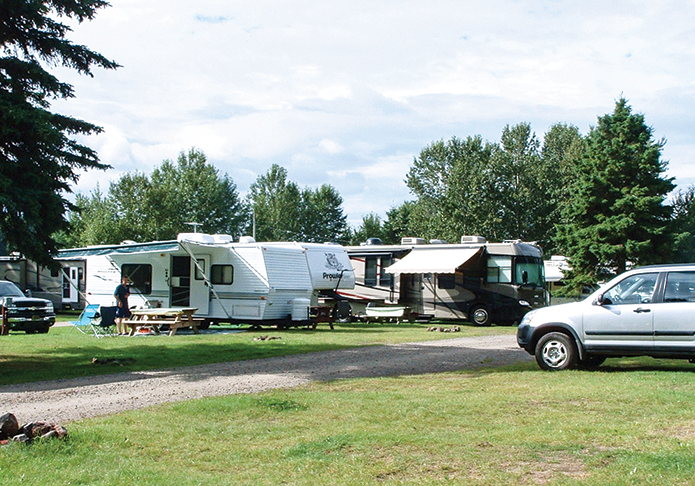 At Camping Chutes Fraser, a hike to the namesake waterfall is de rigueur.