It was a cold morning as my friend, Mellow Mike, and I drove south from Colorado heading for Texas – and Big

Bend National Park – in search of a warm-weather adventure. During our trip, Mellow Mike, so-called because of his relaxed approach to life, was going to teach me how to slow down.
The Rio Grande makes a 90-degree turn deep in the heart of southwest Texas as it defines the border between the United States and Mexico on its way to the Gulf. It’s called the Big Bend, and Big Bend National Park sits inside the turn, 1,200 square miles encompassing the Chisos Mountains, a lofty oasis in the desert. 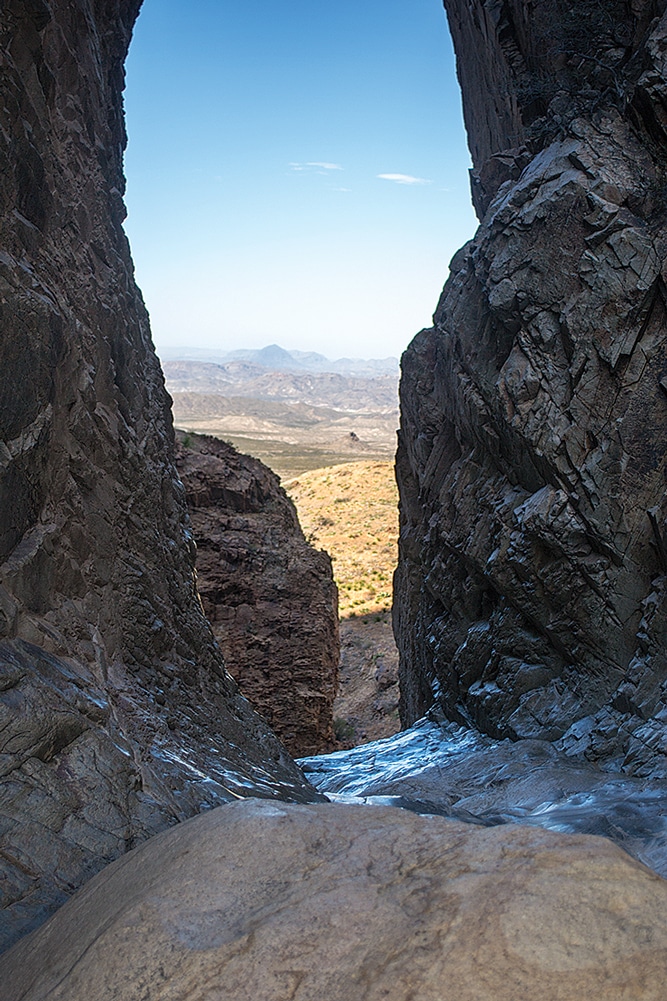 Use caution on the moderately difficult Window Trail. At the top of the Window is slick rock with no railings, and the return hike is uphill.

We spent our second day driving from Las Cruces, New Mexico, across west Texas on Interstate 10, which runs in a straight line from El Paso. Leaving Interstate 10 at Van Horn, and heading south on U.S. Highway 90, the green sign reads “Big Bend NP – 200 miles.” There’s a reason Big Bend is one of the least visited national parks (314,102 visitors in 2014). Even for Texas, it’s a long way from anywhere.
Arriving at Study Butte, near the west entrance of the park, I was fueling my diesel motorhome when a gentle afternoon breeze quickly became a dust storm to be reckoned with – the desert was asserting itself. Seeking shelter in the lee of a nearby building, we battened down the hatches and spent the night buffeted but comfortable in our little Winnebago View.

Following our Texas-size breakfast at a local diner, we entered the park and headed toward Chisos Basin, 30 miles and a few ecosystems away, in the heart of the park. After an hour at the Panther Junction Visitor Center, we backtracked 3 miles to Chisos Mountains Basin Junction and traversed the mini-pass into the basin. (Note: This 6-mile stretch of road to Chisos Basin is not recommended for RVs longer than 24 feet.) The transition from desert floor to mountain basin happens too quickly to appreciate it the first time. Even my traveling companion, Mellow Mike, was eager to see the campground, so we didn’t pause on our descent into the basin. After we had set up camp, which in our case means parking and extending the slide, we pulled out the camp chairs and had our customary arrival brew. It was then we realized we were at the bottom of a bowl surrounded by mountains. It’s strange looking up in all directions at the landscape – in sharp contrast to the infinite desert we had traveled through to get here.

Javelinas have bristly hair and weigh between 40—60 pounds. They resemble pigs, but are not closely related.

The park has three developed campgrounds: Chisos Basin, Cottonwood and Rio Grande Village. The concession-operated Rio Grande Village RV Campground (with the only full hookups in the park) is also located at Rio Grande Village. Chisos Basin Campground has 60 dry-camping sites for RVs up to 24 feet long, flush toilets, running water, grills, picnic tables and a dump station.
The Chisos Basin environment is a lush, high (5,400 feet) mountain refuge. It is drained by Oak Creek, which flows down to “the Window,” then exits the basin through a small crack and cascades to the desert floor below. Were it not for the Window there would be a lake at the low point. Our first day in the park (once I got Mike started), we hiked the 5-mile round-trip trail to the Window. Noon is Mike’s normal time to actually maybe think about possibly doing something. I had a lot to learn, since I am usually up and ready to go before first light.
The hike descends 500 feet, following the creek bed, which had no water in it when we were there. At the Window the creek flows across a slick rock to the outfall then disappears over the side of the mountain. Hiking back up to the camp we watched the setting sun track up the mountains on the east side of the basin.

Chisos Mountain Lodge offers the only full-service dining within the park as well as grand views of the basin and surrounding peaks.

That evening the collared peccaries (commonly called javelinas), hooved piglike creatures with small curved tusks, paid a visit to our campground. They wander at will, rooting and snorting, as if they own the place. Later, a herd of white-tailed deer grazed by. Although we did not see any, mountain lions and bears inhabit the basin, preying on the javelina and deer. It’s a geologically self-contained ecosystem.
The next day we made a 10-mile hike to the summit of Emory Peak, the highest point in the park at an elevation of 7,825 feet. I was training a companion dog at the time and the park ranger gave me permission to take the dog with us on the trail. Augie, a yellow Labrador, probably wished he could stay home, as our hike was warm, dry and uphill.

Another feature of my human traveling companion, Mellow Mike, is his propensity to get lost, which is not easy to do on well-marked, heavily traveled national park trails. His technique involves taking unmarked trails to more unmarked trails (the word “shortcut” is frequently mentioned) until we have no idea where we are. Then he gets his adrenaline flowing and we find our way home bushwhacking-style, feeling like we have survived a harrowing experience. Are we not men? This time we arrived back at camp after dark, tired and thirsty. One thing I don’t plan on learning from Mike is hiking navigation. Relaxation maybe, not navigation.
To celebrate our victory over death we had a banquet at the Chisos Mountains Lodge near the campground. The lodge – with the only full-service restaurant in the park – is a simple stone building with a red roof. The rooms are in small outbuildings; there’s a dining room, bar and gift shop. It is the only national park lodge I have seen that does not have a fireplace or a lobby. Many of the visitors we met at the lodge have been coming to Big Bend for years and think of it as their “secret” national park. Secret no more.

The next day we went to the river. We broke camp, which means we retracted the slide, and headed to Boquillas Canyon, 33 miles east, where the Rio Grande leaves the park. As we descended from the overlook parking area to the canyon floor we were serenaded by a guitar player on the other side of the river. He stood in a hollow next to the river, a natural amphitheater for his performance, quietly strumming his guitar as he sang a beautiful Spanish tune. We waved and said gracias and were rewarded with a smile from across the border. The nearby Boquillas Crossing Port of Entry is the gateway to Mexico for those who wish to cross the border (passports required).
Rio Grande Village RV Campground, a 25-site, full-hookup campground and visitor center near Boquillas Canyon, was inviting, but the more rustic Cottonwood Campground on the other side of the park was our destination for the night. It’s 60 miles from Boquillas Canyon to Cottonwood, near the historic ghost town of Castolon. Cottonwood Campground has a shady riverside setting with 24 dry-camping sites, quite different from our previous Chisos Basin camp. We explored Castolon, hiked along the river and ventured up a nearby hill for a view of the area. Augie enjoyed a swim in the irrigation canal next to the campground. The river is wild and difficult to access through the dense shoreline vegetation. Wildlife is abundant – in addition to the javelinas and deer, it is populated by human birders (birdus lookinguptis) with their binoculars and guidebooks, staring up at the trees.
Mike was teaching me how to relax and I found it easy to do at Cottonwood Campground – no hookups or generators means quiet. It is also dark at night – very dark. The night sky is like few places on earth. Because Big Bend has very little light pollution it has been designated an International Dark-Sky Park. You can see the Milky Way just by looking up. Experiencing the vivid sky here puts the universe and our place in it in perspective. I am small, the universe is big.

It’s a strenuous 10-mile hike up to the top of Mount Emory, the highest point in the park at 7,825 feet.

Our visit to nearby Santa Elena Canyon, where the Rio Grande enters the park, completed our stay at Big Bend. More dramatic than Boquillas Canyon downstream, Santa Elena Canyon abruptly ends as the river leaves the cool, shaded canyon and continues into the desert. Instant ecosystem transformation.
On our return trip home, we spent a day in Marfa, a small town 126 miles northwest of Big Bend. Marfa is home to a historical arts community and is also a noteworthy movie set, famous for the filming of “Giant” in 1956 and, more recently, “No Country For Old Men” (2007). The Hotel Paisano is a historical gem at the center of town, with a charming outdoor courtyard typical of the southwestern Texas style. Before leaving Marfa the next morning, we had breakfast in a small converted house. As we handed our credit card to the waiter, he said, “Sorry, cash or check only.” We didn’t have enough cash with us so the server said, “No problem, send us a check when you get home.” Now that’s Texas-style hospitality.
Big Bend is one of the more isolated national parks I have visited (the other is Great Basin National Park in Nevada), and this adds a special feeling to the place, like it’s my secret national park. Don’t tell anybody, but it’s worth the trip. And I am more laid-back now for the time spent with Mike, my mellowness mentor. I may sleep in until 6 a.m. someday.

I was concerned about safety along the border, so I emailed the Park Service at Big Bend and was pleased to hear that they have had no incidents within the park boundaries. There are no populated areas on either side of the border and no bridges across the river. They felt that Big Bend was probably one of the safer sections of the border. Our only encounters were pleasant. That said, the Park Service does recommend that visitors report any suspicious behavior to park staff or Border Patrol immediately. Note that cellphone coverage in the park is limited.