A  journey along southwest Louisiana’s 180-mile-long Creole Nature Trail All-American Road includes vast stretches of marshland, four wildlife refuges and a chance to fish the waters in the Gulf of Mexico

The air is cool and the sun isn’t even up yet as we streak along the greenish waters of the Calcasieu River Ship Channel in Capt. Tom Adams’ 24-foot Nautic Star. We’ve come to explore southwest Louisiana’s Creole Nature Trail

All-American Road. Not surprisingly, water – seemingly everywhere – is a big part of the experience.

Adams is a 30-plus-year, self-proclaimed “fishing nut” who leads would-be fishermen on the Gulf Coast waters. After picking up some live bait shrimp, we motor for 20 minutes, then angle into what looks like a sea of grass.

Adams expertly navigates Oyster Bayou’s backwater channel and kills the engine. Deep quiet envelopes us, disturbed only by the irritated squawk of a great blue heron.

“I like to get away from the crowds,” Adams says as he baits a shrimp and casts the lure alongside a small island. He hands me the rod, saying, “Just give it a little jerk every 30 seconds or so.”

It’s not long before I feel a telltale tug. “Jerk it to set the hook,” he calls out, grabbing a net. “You’ve got him.”

I reel like crazy, trying to keep the tip up, and soon a 2-pound speckled trout lands in the net. “That’s a good pan-size,” says Adams, smiling.

Before long, my traveling companion, photographer Anne Weaver, lands her first speckled trout and then another. But Adams isn’t a patient fisherman and, after a half-dozen trout, we cruise back to the channel and sidle alongside a big pile of rocks, one of Adams’ “secret” spots. Soon I catch a flounder and, for the next four hours, we haul in drum, redfish, sheepshead, and more flounder and speckled trout – 23 in all.

Between catches, we watch brown pelicans swoop into the water; mighty frigate birds tour the upper airspace; and bottlenose dolphins cut through the water, so close we hear them breathe. By noon, we’re dockside, sunscorched, windblown and a little fish giddy.

Adams expertly cleans and fillets our catch and, when we mention we can’t possibly cook and eat so many fish in our motorhome, he promptly invites us home for dinner. That evening, we revel in crispy sheepshead that Adams’ wife, Joanne, has lightly battered and deep-fried as well as smoky, blackened redfish. These fresh and delicious flavors help us understand why fishing here is not just a sport, but an obsession. 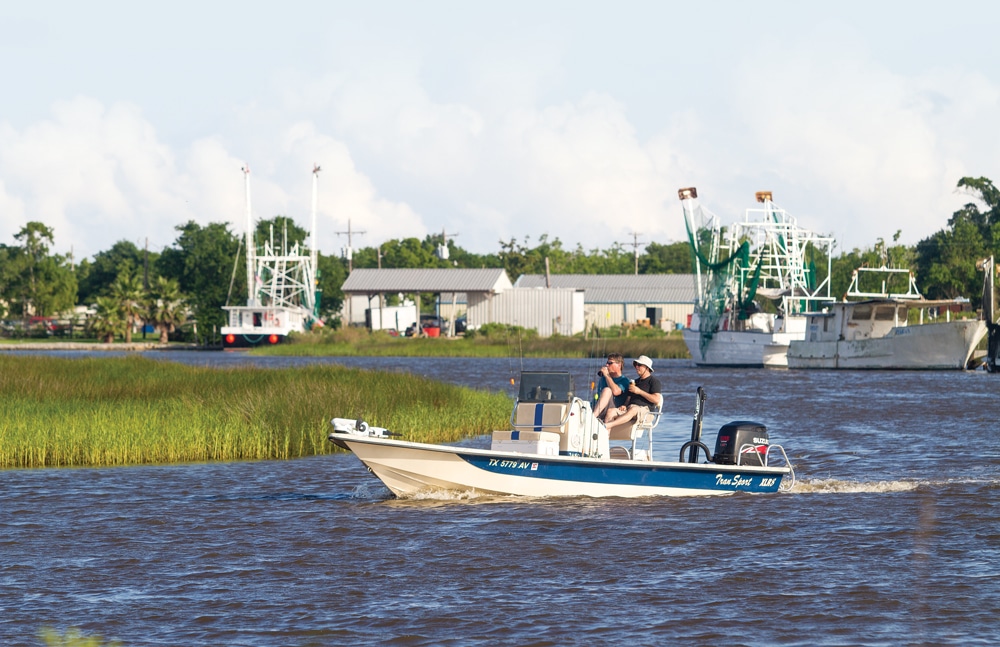 Fishing is a way of life in Louisiana and it seems nearly everyone owns a boat.

A+ Motel & RV Park on Highway 27 in Sulphur, Louisiana, is a great home base for our first leg of the Creole Nature Trail. Conveniently located on the trail, A+ Motel & RV Park earns its name with 134 full-hookup sites, neatly trimmed grounds with a stocked fishing pond, two laundry/shower houses, and two pools, including an adults-only pool with a covered patio and a 75-inch flat-screen TV. This Good Sam Park is someplace I could kick back and stay a while, but the Creole Nature Trail calls.

For breakfast, we stop at B & O Kitchen & Grocery, an award-winning specialty meat company in Sulphur, for a true Cajun meal – boudin, rice and pork sausage, and cracklins (pork belly fried crisp). We eat our fill and buy some for the road. Then we drive 5 miles southwest to the Creole Nature Trail Adventure Point, a free, interactive exhibit/welcome center that offers a great introduction to Louisiana’s wildlife, bayous and marshes, food and music. The center employs hands-on displays that engage the senses. There’s even a high-tech zydeco and Cajun band that lets us “play along.”

With guidance from the Adventure Point’s bird expert and helpful maps and brochures, we drive south on Highway 27, a flat, well-maintained two-laner.

There are two exits onto the trail from Interstate 10; one near Sulphur, and, to the east, near Lake Charles. While both towns boast the usual stores, fuel stations and cultural attractions like museums, casino gaming and restaurants serving Cajun cuisine, we quickly drive into wild Louisiana wetlands. This is the Louisiana Outback, and we’re grateful for our motor­home’s full gas tank and cold water and drinks in the fridge. 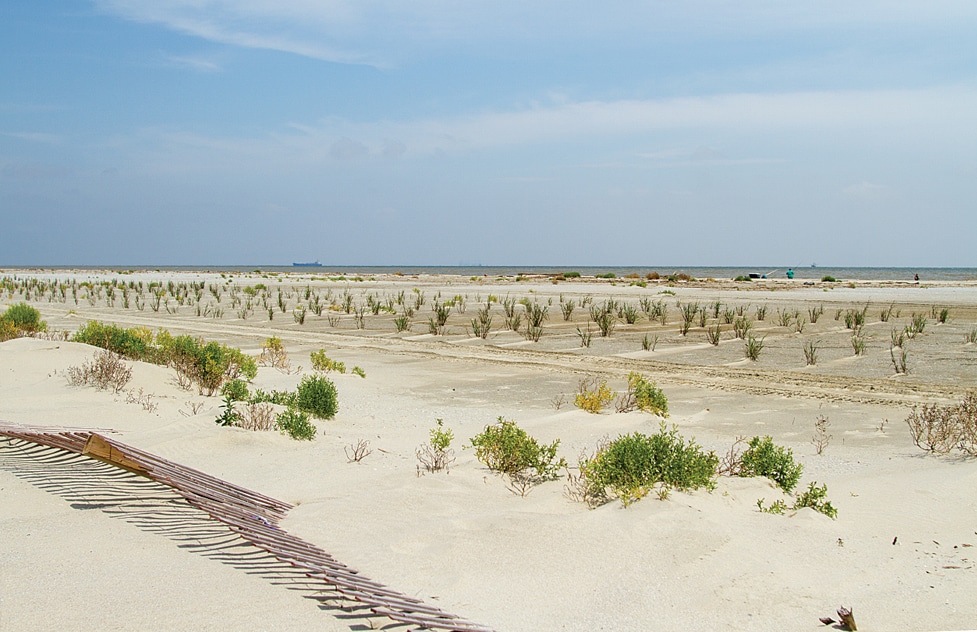 The Gulf Coast has miles of unspoiled, uncrowded beaches.

The Creole Nature Trail, one of only 43 All-American Roads in the U.S., runs 180 miles through three National Wildlife Refuges. The main route is U-shaped with spur roads along the Gulf shoreline and angling into other reserves like Lacassine National Wildlife Refuge and the Peveto Woods Bird & Butterfly Sanctuary. With stops, the main route requires at least two days; to explore all the highlights, three or four.

We head south, passing through small towns, then farms, and, just past Hackberry, the landscape becomes meandering waterways with islands of grass as far as the eye can see. The road courses along the west side of brackish Calcasieu Lake. At 8 miles wide and 18 miles long, the lake earns its “Big Lake” nickname. Along the roadway, brilliant orange, daisylike flowers flutter in the breeze.

Yesterday, the temperature hovered in the 90s with high humidity, but last night’s cold front and thunderstorm have cooled the air. Our first stop is Sabine National Wildlife Refuge, at 125,000 acres, the largest along the trail. We pull into an area marked “Recreation” where a dozen locals fish for blue crabs. One of the crabbers we meet tells us he’s been crabbing here for 30 years. When we ask about today’s catch, he grins and shows off a 5-gallon bucket nearly full of powder-blue crabs.

The area’s blue crabs are famously delicious, and you don’t even need a license to catch them – just some string and a little bait, and before long you’ll be cooking up a fresh, tasty meal.

Just a hop down the road, we stop at the Blue Goose Trail and wildlife overlook, a paved 1-mile walking trail and raised wildlife viewing platform. Atop the tower, the breeze through the grasses and bird tweets, cheeps, squawks, and trills are the only sounds. The Creole Nature Trail is filled with prairie grasslands and miles of freshwater, brackish and saltwater wetlands rich in marsh grasses, crustaceans and small fish, making it a key stopover for birds passing through the Central and Mississippi flyways. In fact, this area boasts more than 5 million migratory waterfowl and 400 species of birds, making it one of the top birding spots in the country.

While visitors will see birds and the occasional alligator along the road, the best way to explore the Creole Nature Trail is to hike refuge trails and walkways. We walk the Wetland Walkway, a raised, 1.5-mile-long boardwalk that wends through 6-foot-tall grasses to a two-story observation tower with a sweeping view. When we spot a couple hopelessly waving against feisty mosquitoes and deer flies, we share our bug spray. The sun, now fully emerged from the clouds, makes me glad I also brought along sunscreen and a broad-brimmed hat. We spot great egrets, blue herons, red-winged blackbirds and common yellow throats, and, while there are Alligator Alley warning signs, no gators.

Our final stop for the day is Holly Beach, a community of beachfront homes leveled in 2005 by Hurricane Rita. Like a phoenix, the colorful stilted beach cabins have been rebuilt, and this “Cajun Riviera” is once again popular for sunbathing, swimming and shelling. We notice a number of RVs are boondocking and we’re tempted by the white sandy beach, but we’ve got reservations at Sam Houston Jones State Park.

Located just north of Lake Charles on the Calcasieu River, Sam Houston Jones State Park encompasses 1,087 acres filled with lagoons, cypress swamps, and pine and hardwood forest. In addition to more than 200 species of birds, the park offers RVers 39 partial-hookup and 20 pull-through sites, most with full hookups, all with barbecues and picnic tables beneath shady trees. There are bathrooms and shower houses, kids’ play structures, three hiking trails and boat launches. The park boasts raised observation platforms over swamps where we spot our first alligator, a 6-footer lazing in the black water, along with dozens of eastern mud turtles.

After spending a peaceful night, we’d planned to kayak the river, but a sudden morning thunderstorm convinces us otherwise. Instead we churn south down Highway 27, on the east side of the Creole Nature Trail’s U-route, to Cameron Prairie National Wildlife Refuge and Pintail Wildlife Drive & Boardwalk.

Pintail is a 3-mile driving route through ponds and watery wetlands filled with stilts, herons, egrets, ibis, cormorants and dozens of duck species. Some ponds are covered with giant lilies, their yellow flower stalks flagging in the wind.

The rookery on Grosse Savanne sanctuary is home to egrets, herons, cormorants, pelicans and other water birds.

We spend a few hours creeping along Pintail Drive, stopping often to snap photos. While visitors must stay in their vehicles, there’s also an opportunity to walk the raised, accessible boardwalk that extends for a half-mile over a marsh and see cormorants and green herons so close you can almost touch them. As we pass, stinkpot turtles evade us by diving headfirst into the brown water.

We’re famished by the time we leave Pintail and, at the intersection of Highway 27 and Route 1143, we stop at T-Boy’s Cajun Grill for a basket of crispy, light-as-air fried crawfish tails. Then it’s on to Grosse Savanne Eco-Tours, a privately owned, 50,000-acre sanctuary of freshwater and saltwater marshes, cypress swamps, coastal prairies, pine forest and agricultural lands.
Capt. Sammie fires up the boat and we motor into the swamp. We move slowly because it’s breeding season and rookeries of egrets, cormorants, and blue, green, and tricolored herons have built nests on tree-filled islands. As we approach, the parents rise up, big wings flapping, trying to distract us from the nests. On lower branches, the young birds, some with bristly feathers on their heads, peer out at us. As soon as we pass, the parents flutter back to the treetops.

For the next two hours, we explore the wetlands. Around every bend there’s another delight – wigeon ducks churning along; iridescent ibis stalking the shallows; giant chinquapin lilies as large as beach balls; turtles sunning themselves on logs; and small and large alligators, just their eyes, noses and head tops visible, patrolling the waters. At one turn, the treetops blaze pink with roseate spoonbills that flap away en masse, filling the sky with their rosy flight.

Around another, we come upon big, dead trees, all of them filled with the twiggy nests of egrets and cormorants. The cacophony of these noisy birds shatters the quiet. We count a dozen, two dozen, three dozen and more nests. Then we spot them – baby birds, some teenagers with crazy-looking spiky feathers, others still naked and blushing. A mother bird flies in and gracefully lands next to the youngest birds that crane their necks, mouths open wide to signal they want dinner.

It’s a special moment and one that lets us know we’ve got to come back. We’ve just begun to explore the magic of Louisiana’s Creole Nature Trail. 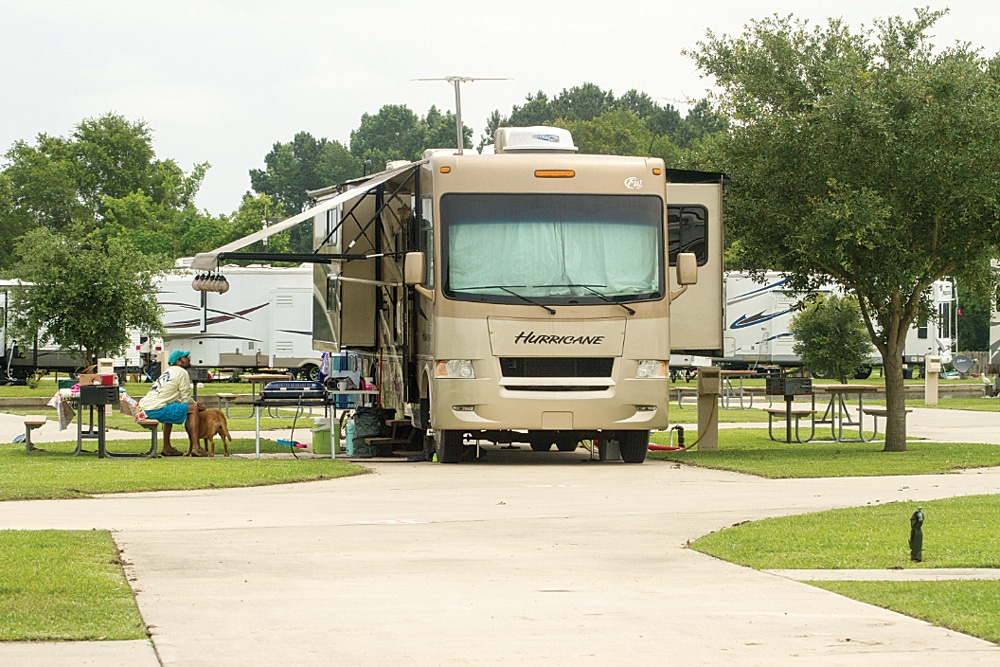