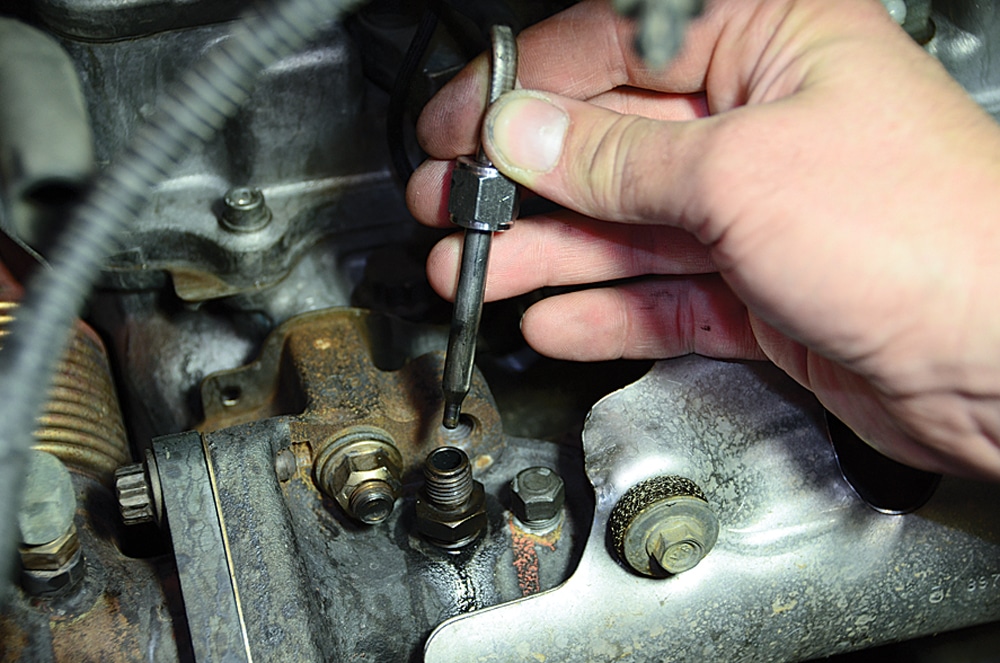 Humans have always appreciated all-in-one devices. Consider the Swiss Army Knife, for instance, armed with everything from a saw to scissors to a toothpick (and knives, of course). You would never want to go camping without one.

Nor tow a heavy trailer without the new Banks iQ 2.0. This digital unit combines so many multiple functions into one compact unit, that you would almost expect it to clean your pickup, too. (Well, one can always hope.) It consolidates a wide array of readouts, such as engine diagnostics, fuel economy and performance, along with GPS navigation, rearview camera, Bluetooth and digital entertainment. And even more functions are on the way later this year, with readouts for additional temperature data and water/methanol injection.

A thermocouple is fitted into the exhaust manifold, upstream of the turbine inlet, for the most accurate EGT (Exhaust Gas Temperature) reading.

Until the 2.0 version arrived in 2012, the Banks iQ initially served as an interface between the driver and the company’s other performance enhancers (Six-Gun Diesel Tuners, EconoMind Diesel Tuners and SpeedBrakes). Basically, the iQ’s handy 5-inch touchscreen integrated vehicle data with control features for these devices.

The format for presenting this information proved to be highly effective and simple, so Banks’ R&D department decided to broaden the applications. Now an iQ can function on any truck engine, gasoline or diesel, that is equipped with OBDII capability (1996 to present for nearly all major brands, except for pre-2002 Dodge diesels). What this means to the towing enthusiast is the ability to not only modernize an older vehicle with the latest in digital technology, but also condense many devices into one (like that Swiss Army Knife).

The iQ is very comprehensive in its functionality, and we don’t have room to cover every single aspect here, so we’ll focus mostly on its utility for those towing with pickups. Turns out that Banks’ engineer Peter Treydte has hands-on experience in this area, prompting us to ask him how he sets up the iQ differently in towing versus non-towing applications.

Various modes of the iQ provide a wide range of data and functions, such as engine diagnostics, fuel economy and performance, GPS navigation, rearview camera and digital entertainment.

“The flexibility of the system lets you tailor it to your particular needs,” he points out. “When I’m towing a trailer, I like to customize the monitor’s five available readouts for temperature, such as oil, coolant and exhaust gas. Those are the most important, along with boost and fuel pressure.”

But when the fifth-wheel is parked, and you’re about to head out on the highway solo, it’s a simple matter to change the readouts to improve the fuel economy and/or performance of your vehicle. That’s where the optional Automind Flash programming feature comes into play.

This upgrade for the iQ 2.0 (available only for certain Ford, GM, Dodge/Ram and Jeep vehicles) allows the user to choose various engine calibrations to increase power output, improve fuel economy and enhance drivability. Options are also available for correcting speedometer readings for oversized tires or modified gear ratios, among a host of other performance features. Basically, that means you can have it both ways when it comes to performance, whether you’re towing a trailer or not.