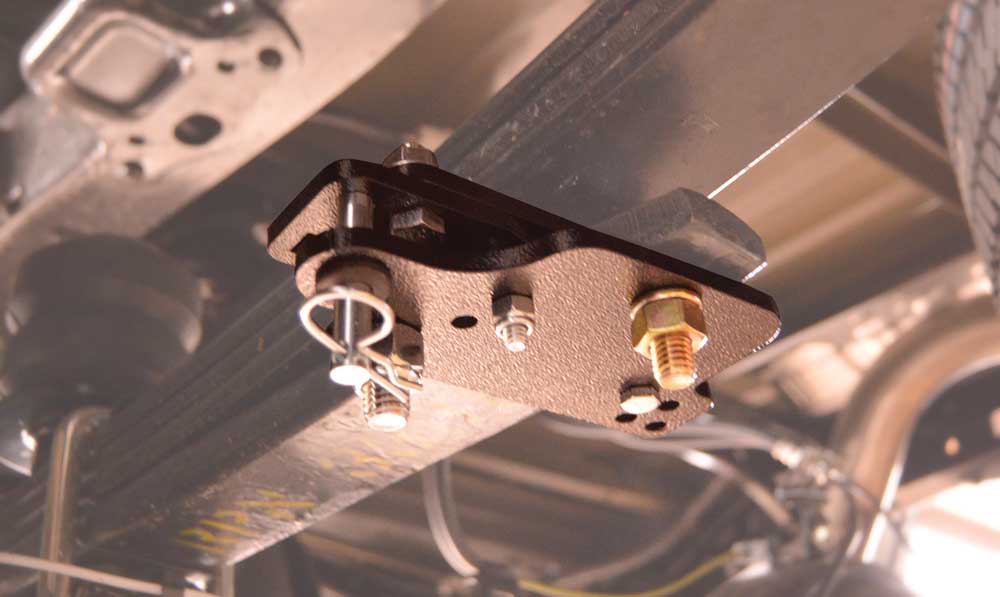 Leaf-spring suspensions on trucks must be capable of hauling a maximum payload and still provide a comfortable ride under no-load conditions. To accommodate varying loads, the suspensions have a main leaf spring that connects to the vehicle’s frame and progressively shorter leaf springs bolted in place underneath. Suspensions designed to carry heavier loads, including truck campers, travel trailers and fifth-wheels, are usually equipped with overload springs added to the leaf-spring pack.

Torklift’s StableLoad suspension stabilizers eliminate the necessity for the rear of the truck to squat before the overload springs begin to work. StableLoad upper stabilizers use a thick bump stop to put the upper overload in contact with the frame at or near normal ride height. StableLoad lower stabilizers are placed between the leaf pack and the lower overload, eliminating the gap and engaging the overload spring with little or no suspension drop. By preloading the springs, ride comfort can be improved while still providing the necessary support for hitch or camper weight and supplies carried in the bed of the truck.
As with any aftermarket suspension upgrade, the StableLoad system will not increase the gross vehicle weight rating (gvwr) or tow capacity. When towing or hauling an RV, the truck must be properly sized and equipped for the load.

Shown is a Torklift StableLoad Quick Disconnect in the engaged position. Rotating the stabilizer 90 degrees disengages it.

Two StableLoad Quick Disconnect kits are available: A7310 for trucks that have holes in the ends of the lower overload spring, and A7311, which includes four 7/16-inch cobalt bits for drilling the necessary holes in the leaf.

Before beginning the job, it is best to read through the entire installation manual, paying careful attention to the figures showing how the StableLoad stabilizers are assembled.
The first step is to raise the rear of the truck using a floor jack placed under the hitch. This will increase the gap between the lower overload and the main spring pack. The front wheels should be chocked to prevent rolling, and jack stands should be placed under the rear frame on both sides.

The F-350’s lower overload already had holes, but if drilling is necessary, the process begins with marking the location of the holes 1 inch in from the end of the spring. Torklift recommends the use of a low-speed 18-volt or larger cordless drill spinning at 200 to 300 rpm. Slow rpm while pressing the drill bit against the spring with significant force will produce the best results. Cutting fluid or motor oil should be added to the end of the drill bit every 5 to 10 seconds to cool and lubricate it.

Once the drill bit begins to dimple the top of the spring, start drilling the next hole. When all four holes have been drilled to the point of dimpling, go back and complete the drilling. The drill bits tend to grab when they exit through the top, which could damage the spring; final drilling should be done with lighter pressure to minimize grabbing and breaking. Torklift rents a tool that cradles the cordless drill to make drilling through the spring easier. 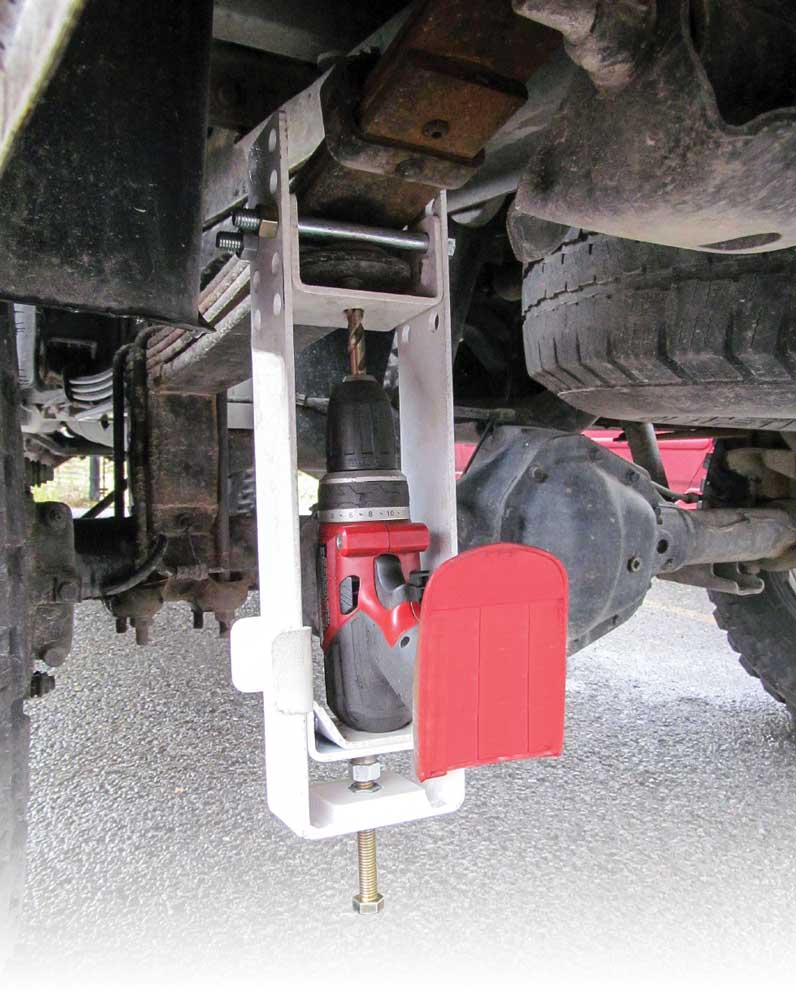 StableLoad Drill Tool
Torklift’s rental tool makes fast work of drilling through the lower overload spring on vehicles that don’t come from the factory with the holes. Turning a bolt in the bottom of the tool applies upward pressure on the cradle, pressing the cobalt drill bit into the spring with the needed force and requiring little effort by the installer. A ratchet wrench and socket are used to turn the bolt. The tool is free to rent but requires a $150 refundable deposit and shipping fees in both directions.

To install the parts, marks are made 3 inches from the front and rear of the lower overload. Two measurements are taken at this location, including the thickness of the overload spring and the size of the gap between the overload and the main spring pack.

The lower StableLoads use a bolt as a pivot point to engage and disengage. Washers serve as spacers between the bottom plate and the Quick Disconnect wedge pack. The size of the gap will dictate how many wedges to include in the pack, and the thickness of the spring determines the number of washers to use on the pivot bolts. The kit includes three ¼-inch-thick wedges for each StableLoad.

The gap on the F-350 measured between 7/8 inch and 1¼ inches, so all three wedges were stacked, making the wedge pack ¾-inch thick. If the measurement had been between ½ inch and ¾ inch, only two wedges would be required. One wedge would be used for a gap of ¼ inch or less.

Assembling the StableLoads isn’t difficult, but there is a learning curve. Once you figure out how to assemble the first one, installation of the other three goes quickly. One or two bolts (depending on the width of the spring) are attached to the bottom plate.

Once assembled, the StableLoads are ready to bolt to the overload spring with the wedge pack placed on the inside or outside of the spring. On the F-350 we positioned the wedge pack on the outside to make engagement and disengagement easier. One inch of clearance is required between the wedge pack and obstacles such as the frame, exhaust system and brake lines.

4) The StableLoad Quick Disconnect stabilizers are assembled with three wedges to fit the gap between the lower overload spring and the main leaf springs. 5) A 7/16-inch bolt secures the wedge pack to the overload spring. The bolt is torqued to 35 lb-ft. 6) The wedge pack is set in the disengaged position.

We needed to load the F-350 to evaluate the stabilizers, so we drove it to Truck Camper Warehouse in West Chesterfield, New Hampshire, and mounted a 2017 Northstar 9.5 Igloo U truck camper with a dry weight of 2,670 pounds. The F-350 squatted 11/8 inches, measured at the rear wheels. This is less than we would normally expect, but the truck had upper StableLoads, helping to decrease squatting.

Driving a predetermined test route with the newly installed lower StableLoads disconnected revealed the suspension handled the weight of the camper well with only slight bouncing on smooth roads and minor body roll while cornering. However, when driving on a rough road with potholes and bumps, bouncing and body roll increased noticeably, as they often do when transitioning from smooth to rough roads.

After engaging the two lower StableLoads, the sag at the rear axle decreased to just ½ inch. The change in attitude of the truck, although small, could be felt in the driver’s seat. A trip down the same rough road resulted in a considerable decrease in bouncing and body roll. Even on smooth surfaces, the stablizers improved the F-350’s handling noticeably.

7) A 3/8-inch ratchet and extension are used to engage the Quick Disconnect stabilizer. 8) A clip and pin keep it in place in the engaged position.

While engaging and disengaging the Quick Disconnects is normally a simple procedure, the gap needed to rotate the wedge pack on the test truck was too small, requiring the rear of the pickup to be jacked up to create enough space. Although the F-350 appears not to sag when unloaded, the springs have flattened enough over time to prevent the wedge pack from turning all the way into position.

The solution was to remove one wedge from the rear StableLoads, reducing the thickness to ½ inch and allowing the springs to preload without the need to jack up the truck. With the Quick Disconnects engaged and no load on the F-350, the ride was very stiff and uncomfortable, but once they were disconnected, the ride returned to normal.

We also tested the lower StableLoads while towing several fifth-wheels and travel trailers. As expected, the stabilizers made a clear improvement in handling and controlling suspension bounce and body roll when towing heavy fifth-wheels. Sag was decreased, and the headlights maintained proper alignment. Initially, we thought towing a trailer using a weight-distributing hitch and less weight on the F-350 would result in only a minor, if any, difference, Surprisingly, handling was much better with the Quick Disconnects engaged, and bouncing was reduced.

Anatomy of a Leaf-Spring Pack

Leaf springs, commonly found on full-size pickup trucks, have been around since the days of horse-drawn carriages and wagons. While the design is simple, understanding how leaf springs work can help owners decide on the best type of suspension-assist system to fit their needs when towing a heavy trailer or hauling a truck camper.

Today’s precision leaf springs are computer-designed and -engineered. The springs are arched and will flatten when weight is added to the truck. As the main leaf is compressed and straightened, it engages the shorter leaf underneath it. Adding more weight to the truck causes the additional leafs below to become engaged. The result is a suspension system that becomes stiffer as the weight of the load is increased.

Rear squatting can lead to drivability problems, even when the truck’s tow-capacity rating is properly matched to the trailer or the payload capacity is not exceeded. A sagging rear end causes the front of the truck to rise, resulting in elevated headlight aiming that won’t illuminate the road properly and could also affect the vision of oncoming drivers.

Another serious consequence of rear-end sag is loss of steering control because front-end weight is decreased. This can be especially dangerous on wet surfaces. And since a vehicle’s front brakes provide up to 75 percent of its braking power, stopping distance can be increased.Sway and suspension bouncing (known as porpoising) can also be amplified.
A logical solution is to keep the springs engaged at all times, but the ride and handling would be extremely hard and unpleasant when driving an unloaded vehicle. Therefore, the springs activate in stages based on varying anticipated loads, factoring in that the truck probably won’t be heavily loaded 100 percent of the time. To improve drivability, an adjustable or disengageable suspension-assist system can be considered.