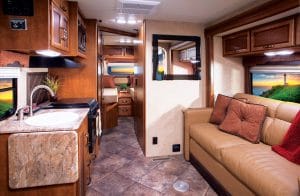 Bigger than an SUV, Smaller Than a Traditional Class A, Thor Motor Coach Introduces a Totally New Genre: The RUV

Introducing a new model, or even a new brand to the RV industry would seem a pretty simple undertaking from the consumer’s point of view. After all, if you visit a local RV dealership, most of the nameplates you’ll encounter there are variations of the same general theme, and are often only differentiated by size, drivetrain, equipment and floorplan.
Defining an entirely new genre, on the other hand, is a more intricate undertaking.
That, however, is just what Thor Motor Coach is attempting to do with its new AXIS motorhome. The first Class A coach built on a Ford E-series chassis, the diminutive motorhome is, as Thor executives note, only about 5 feet longer than a Chevrolet Suburban. But while it doesn’t cost much more than a high-end SUV, it is certainly capable of much more.

“We call it an ‘RUV’ – a Recreational Utility Vehicle,” said Jon Krider, director of marketing for Elkhart, Ind.-based Thor Motor Coach. “It’s small and nimble enough to drive around town – but when you’re at, say, your kid’s soccer game and there’s a break or the weather turns, it gives you a place to relax, use the facilities, have some lunch – everything you can’t do in an SUV.”
Thor isn’t the first to build a Class A motorhome on a chassis usually associated with traditionally smaller Class C and Class B coaches, but it is the first company to design and engineer a Class A “house” on the Ford E-350 framework. As Krider noted, the V-10-powered/five-speed TorqShift-equipped Ford offered a number of advantages. Price, as might be expected, was one concern; he estimated that building on the Mercedes-Benz Sprinter chassis, for example, might have increased the MSRP by as much as $12,000 – and it adds a diesel component to the mix. “Gas is still pretty much the universal fuel in the U.S. and Canada,” said Krider. More to the point, though, the Ford allowed Thor designers a lot more latitude and the ability to offer higher gross vehicle weight rating (12,500 pounds) and gross combined weight rating (18,500 pounds) capacities.

Dash includes a flip-up computer tray. For meals, a table is supplied that mounts in the floor forward of the sofa.

“The E-350 chassis actually has wider frame rails than a traditional Class A gas chassis, so it has a solid stance, further enhanced by its lower (by 5 inches) center of gravity,” Krider pointed out. “Plus, we were able to lengthen the rails. As a consequence, this motorhome has a 188-inch wheelbase – there’s not a lot of overhang. It all adds up to an extremely stable platform.” The motorhome’s maneuverability is improved further by an inconspicuous narrowing of the frame up front, where the AXIS is a full 7 inches narrower than out back.
Using a strip chassis (most consumers are only familiar with the E-350 in cab chassis form, which maintains the cab, doors and windshield, none of which are included in the strip version) also places the engine “doghouse” farther forward, eliminating the traditional “hump” and opening up the forward cabin. Thor fills the space nicely with a removable coffee table, which, combined with the swivel feature of the twin oversize captain’s chairs, creates a second, more intimate dining location (the primary table works in conjunction with the sofa seating). The clean, unencumbered dash places the stereo and major switches in the center dash pod, within reach of both driver and passenger, with a fold-out computer tray built into the dash on the navigator’s side of things.

Oversize captain’s chairs swivel, and in conjunction with a second, smaller table, can create a more intimate dining environment.

Directly above the cockpit is the same type of electronically actuated and hidden 39-by-75-inch bunk bed that Thor introduced in its larger A.C.E. Class A gas coach, though it’s so well-integrated into the interior design (the bottom of the bunk even incorporates cabin lighting) that it’s unnoticeable when not in use.
In fact, there are a wealth of sleeping locations in what might otherwise be mistaken for a “couple’s coach” based upon its size. The streetside sofa, housed in the motorhome’s only slideout, also provides ancillary sleeping arrangements, folding out into a 54-by-75-inch hide-a-bed (the position of the slide was, in fact, intended to allow easy access throughout the coach with the hide-a-bed extended) while twin 39-by-75-inch bunk beds in the rear can be converted into a king-size playroom for the kids by using the extra cushions.
What really distinguishes the interior, though, is a unique double-hinged “extender-room” door that turns the streetside mid-coach bathroom into a virtual changing room. Essentially, the entire inside wall of the bathroom can be folded out, combining the bath and hallway into one large space; the double-door butts against the 6-cubic-foot curbside refrigerator when the area is in use. And, while at first blush a shower curtain seems a poor choice when even small travel trailers are being fitted with neo-angle shower stalls, it, too, was chosen for space utilization.

“A hard-walled shower would ‘enclose’ the bathroom,” Krider said. “It’s just larger without it.”
Nuts and bolts aside, Thor wrapped the AXIS with a decidedly distinctive design set off by the arched one-piece panoramic windshield – and, again, tweaked the status quo. Chromed side mirrors with integrated cameras are mounted well forward so screens on the oversize side windows don’t interfere with vision (a rear backup camera also is standard), headlight pods are ringed with LED strips, Jalousie-style frameless windows are used throughout and, as Krider pointed out, there’s plenty of storage, including pass-through compartments both front and rear accessed by side-opening baggage doors.
The new Thor Motor Coach Class A actually comes in two flavors: the AXIS, and, with a bit more aggressive styling, the Vegas. Either one can do everything an SUV can’t.

Bruce Hampson has been writing about cars, boats and RVs for more than 30 years. A former senior managing editor at MotorHome, he lives in the “RV Capital of the World,” Elkhart, Ind.
Class A MotorhomesRV Reviews