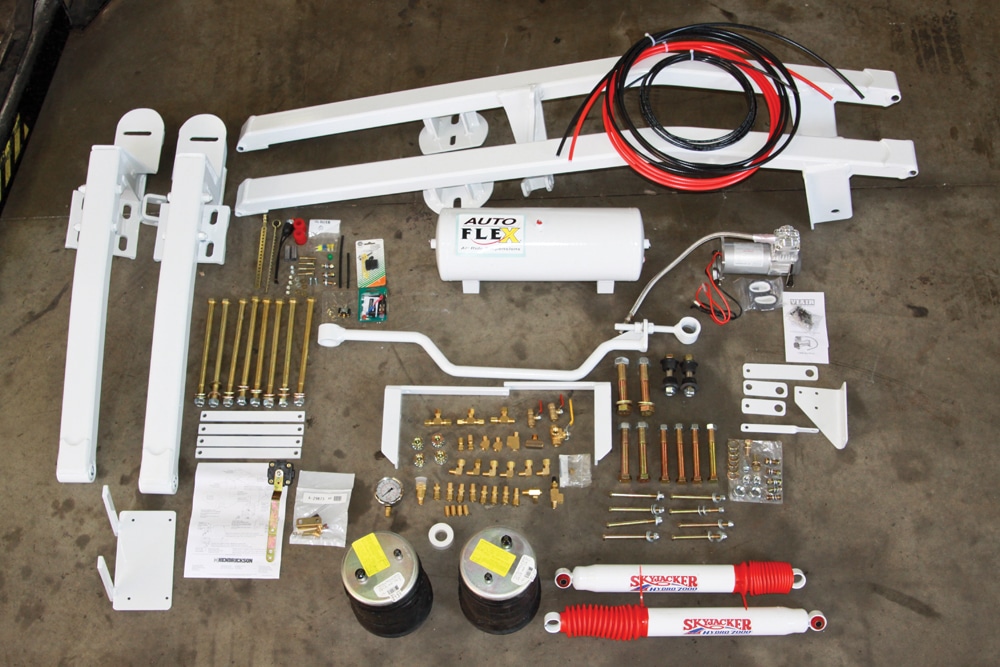 Technology has spearheaded many advancements in tow vehicles, but when it comes to light-truck suspensions, time has not been kind. For more than 50 years, there have been only a few major modern advances in that department. Traditional leaf springs seem to be the norm, more than likely because of price and the fact that utility vehicles have been suspended by leaf springs since the covered wagon. They get the job done, but not without limitations in regard to ride quality when it comes to heavily sprung models and, of course, weight-carrying capabilities. Two Canadian brothers, Dereck and Paul Legros, however, are out to change traditional suspensions with their Auto Flex Air Ride Suspension.

Auto Flex automatically adjusts within seconds to accommodate for light to heavy loads using a specialized leveling valve. The Auto Flex Air Ride Suspension is claimed to shorten braking distance and improve overall stability whether you’re towing a big fifth-wheel or hauling a heavy camper. The Auto Flex does this by completely replacing the truck’s leaf springs.

Traditional leaf springs have a number of deficiencies. A major problem is that they allow for “axle wrap,” whereby the axle attempts to rotate in the opposite direction of the wheels under torque. This occurs during acceleration and deceleration and is magnified with a heavy load. Axle wrap and decreased braking distances go hand in hand. As the axle rotates, the front of the vehicle begins to dive, thus decreasing the amount of braking power to the rear wheels by overloading the front brakes. The result can be somewhat longer stopping distances. Albeit minor, leaf springs also allow for side-to-side movement, which is curtailed by the Auto Flex.

Auto Flex Air Ride Suspension improves the ride, handling and load capability using a trailing arm design with air bags that is similar to those used on commercial transport trucks. Instead of the axle rotating, the air bags compensate for the increased torque and load. If a traditional leaf spring were to break, you could be stranded until the tow truck showed up. In the unlikely event the heavy-duty air bag on the Auto Flex system were to fail, the truck can still be safely driven for many miles while riding on the built-in bump-stops.

The system comes equipped with a quick-disconnect air port that can be utilized as an onboard primary air source. Attach a hose equipped with an air chuck and you can inflate your truck or trailer tires anytime. Another feature is the capability to dump the air from the air bags to allow the rear of the truck to lower several inches. This is a bonus if your trailer has the propensity to drag its rear while entering steep driveways. These adjustments can be controlled by a flip of a toggle switch from the inside of the truck, even while driving down the highway.

Auto Flex Air Ride Suspension is unlike some other replacement suspensions on the market today. It’s a true air-ride system, not an air-helper spring system that is commonly used. Typically, air-helper springs are limited to 2,500-3,500 pounds per pair and are sometimes installed between the frame and the axle. According to the manufacturer, this location is not ideal for supporting heavy loads. The Auto Flex system has trailing arms and offset air bags capable of supporting 3,500 pounds per individual air bag.

Part of the increased stability is attributed to the use of an adjustable sway bar. The sway bar made by Auto Flex is similar to those in the aftermarket, but this unit is built into the trailing arms and is much heavier duty and designed to prevent side-to-side movement.

Installation of the Auto Flex Air Ride Suspension with auto-leveling on our 2011 Ford F-350 dually was accomplished by Transwest Truck Trailer RV in Fredrick, Colo. The job took approximately nine hours to complete with two guys working together. The manual air fill model will take about three hours less to install. Transwest installs the Auto Flex units on a regular basis and offers complete sales, service, installation and repairs for trucks and trailers.

Each kit comes complete with everything needed for installation including the necessary hardware, fittings, air lines, a pressure switch, relay and wiring. All suspension components are powder-coated in black, but for illustrative purposes the system we installed and photographed was painted white.

Before the installation can get started, the technician will need to measure and note the height from the ground to a designated point at the rear of the truck for future adjustment. Once this measurement is noted, the truck is raised, and the tires and wheels are removed. The shocks and U-bolts that hold the leaf springs into place are then removed. It’s critical that the axle assembly is supported with jack stands and the driveline secured (loosely), to ensure that the rear axle does not swing forward.

The leaf springs are then removed along with the spring shackles and the front overload spring bracket. Original spring shackles are installed to each new bow assembly, and the trailing arms are bolted to the axle using the provided 9/16-inch bolts instead of the original U-bolts. The bow assemblies are bolted to the trailing arms with the provided 7/8-inch Grade 8 bolts and flat washers; axle bolts must be tightened to the recommended torque settings. These values will vary depending on make and model of the truck.

Next, we installed the Auto Flex sway bar with the adjusting end on the passenger side of the truck. The first step is to measure from the frame to the hub face on each side. After adjusting the sway bar to make sure each side is equal, the adjusting nut is tightened. The shocks and air bags are then put into place. It’s important that the air bags are vertical and torqued to spec.

The air system is now ready for installation. Mounting the 3-gallon air tank, compressor, shut-off valves, leveling valve, fittings and air lines will take awhile. Part of the time is spent running the wiring loom and the 1/4-inch air line along the frame from the appropriate fitting to underneath the hood near the electrical panel. The toggle switch is mounted under the dash. The pressure switch and Bosch-style relay are mounted near the electrical panel, following the wiring diagram in the instructions.

Prior to reinstalling the tires and wheels, all the bolts and adjustments are double-checked. Once the tires and wheels are put back in place and secured to the tire manufacturer’s specifications, the truck is lowered onto the ground. Turning on the dash-mounted toggle switch will add air into the new Auto Flex system.

The leveling valve is then adjusted so that it sits at the previously measured height prior to the installation of the new system. Once the vehicle is at ride height, the 7/8-inch bolts on the trailing arms are torqued to 400 ft-lb. At this point it is prudent to check all the fittings and lines for air leaks. After hauling or towing your RV for 100 miles or so, recheck the ride height along with the position of the air bags to be sure they have remained vertical. Also, visually inspect the trailing arms to be certain that they have remained centered.

Prior to the installation of the Auto Flex Air Ride Suspension system, we measured the pinion angle and noted the height position of the headlights. The pinion angle was 11 degrees before and 10.5 degrees after the install was completed. The headlights measured roughly 36 inches to the top of the light beam before and after installation of the Auto Flex. We had measured the rear end of the truck from the ground to the pin striping behind the rear fender; this measurement was 29 1/2 inches before the Auto Flex was installed and 29 1/4 inches with the new suspension. With the added 4,000 pounds of pin weight from the fifth-wheel trailer, the measurement dropped to only 29 inches, proving just how well the auto-leveling valve performs.

The first thing we analyzed was the braking distance from 60 mph to a complete stop. We set up a course at the end of a dead end road without any traffic and placed a couple of indicator cones to mark the start of a simulated panic stop. From the cone we used a measuring wheel to accurately read the distance from the cone to the truck as it came to a complete halt.

Before the project was done, Dereck explained that once the system was installed on the truck, “the nose would no longer dive during hard braking.” The concept is a little hard to picture without performing tests. Nosedive when towing a fifth-wheel can also be aggravated by an improperly adjusted trailer brake control, so that factor should also be checked when nosedive is evident. The stopping distance before the installation was 145 feet, and the driver could feel a clear nosedive along with the anti-lock brakes pulsing on and off. After the installation, the anti-lock brake pulsing disappeared. With Auto Flex, the truck stopped in an impressive 115 feet without any nosedive, holding a solid, straight course during braking.

The next road test included a long dirt road with a seriously washboarded surface. For an accurate truck feel from 0-50 mph, we slowly increased speed to get a good sense of the road and how the new suspension was reacting. At lower speeds the ride was noticeably smoother after the Auto Flex installation. At higher speeds there was not a lot of difference in ride quality, likely due to the four heavy-duty rear tires inflated to 80 psi.

Towing a 37-foot, 16,400-pound fifth-wheel exhibited very positive results. Upon exiting the Transwest driveway, there was an immediate cessation of chucking as the trailer passed over the uneven dip in the driveway. One mile after entering the interstate, the truck and trailer combo was tested for ride quality over the many bridge decks that had previously left the driver and passenger feeling like they needed a chiropractic adjustment. The difference with the new suspension was astounding. When traveling over smaller bumps, there was a definite improvement, but nowhere near as impressive as when encountering large dips, bumps and ruts.

Overall improvement in ride quality, handling and load-carrying capabilities are well worth the price and installation effort. The Auto Flex Air Ride Suspension system installed on the 1-ton Ford used for this test is the same model that is used on 1/2- and 3/4-ton models and retails for $3,400. For 4500 and 5500 series trucks, the MSRP is $4,400. Kits are also available for Chevrolet and Dodge/Ram trucks. A manual-fill system will be available soon and will result in a lower-cost system option. All models are protected by a one-year warranty.