At Your Doorstep: MORryde StepAbove 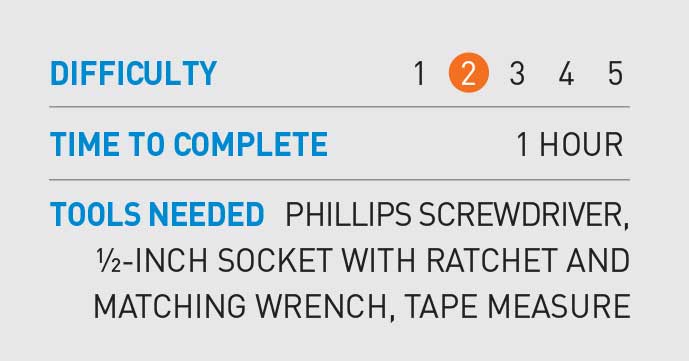 MORryde’s retractable stairs make getting into and out of an RV a breeze, and they flip up for travel

Not much has changed in the way people get into and out of travel trailers and fifth-wheels. The RV industry has been using the same style steps for years, and most owners are forced to tolerate the way they can sometimes lean and sway in unfavorable positions, not to mention the narrow rungs that can reduce stability and impact footing.

The StepAbove stores in the entry-door opening,
securely latched in place to prevent movement.

While a few improved-design aftermarket steps are now used on production units, MORryde is banking on its recently introduced StepAbove folding staircase to be a game changer. Much more than pull-out and folding steps, the new retractable staircase has been showing up on certain models right from the factory and is now being offered to the aftermarket.

The StepAbove consists of a specially designed and shaped all-aluminum stair structure that is meant to replace the standard entry stairs on trailers and fifth-wheels relatively
easily. The one-piece structure takes a completely different approach to how steps are affixed and offers unique adjustability via feet that can be individually positioned for the correct height in response to terrain.

The steps are deployed by releasing the handle and guiding the structure to the ground, which is a smooth process.

The American-made step system is rigid and well built and comes with all the hardware necessary for installation right out of the box. The job can be accomplished in about an hour with common hand tools, but before ordering, check online for the correct fitment specs. Models are available to fit doorways from 26 to 30 inches and are rated to hold up to 500 pounds.

The process begins by removing the step transition strip, located between the existing door threshold and the floor. Soliciting a helping hand to lift and steady the StepAbove will ease the next task of positioning the assembly into its closed configuration. Placing the hinge plate into its mounting position on the floor while temporarily locking the steps into the upright storage state makes the job much easier.

Mounting the StepAbove requires driving screws through the hinge plate into the entryway landing area after confirming sufficient clearance.

At this point it may be necessary to do some minor wood trimming to allow for a proper fit in the doorjamb. Before lifting the steps for fitment, make sure the adjustable legs are all the way in to prevent clearance problems.

With the StepAbove properly positioned to the door’s thin flange, the final measurements can be made to space and center the hinge plate just before driving the mounting screws. You’ll be looking for a 15/16-inch gap from the inside edge of the threshold to the front of the StepAbove’s hinge plate. Doing this will ensure a proper fit over the factory threshold.
With the front gap marked, the center of the door opening is located by making sure there’s a minimum of 1/8 inch between the inside lip on the doorjamb and the outside edge of the step on each side. Before running all the screws in, set the outermost two screws and give the StepAbove a quick test run. Make sure the step moves freely into the travel and deployed positions, and the latching mechanism functions correctly. Once confirmed, the remainder of the screws can be installed.

The handle is turned to release the latches that hold the step assembly in place for travel.

The StepAbove is a sturdy, stable and safe piece of equipment. After running up and down the steps multiple times a day over the course of a week, there were no issues with flex or adverse movement. Step spacing is much better than factory counterparts, and users always felt secure entering and exiting the trailer. The adjustable legs do a good job of conforming to uneven terrain.

The feet can be adjusted to accommodate terrain, allowing the steps to remain solid and wiggle-free while entering and exiting the trailer.

Even though the StepAbove is made of lightweight aluminum, it does take some effort to lower and raise the stairs, but once acclimated, the process to deploy, fold up and secure the latching system becomes second nature. The StepAbove requires additional space outside the RV to open the steps, which could be an issue in tight storage facilities. Also, users need to remember to clean or sweep off the rungs before storing the steps to prevent the entry area from becoming soiled. If the steps are put away in the rain, drying the rungs will help keep some water off the floor, or simply lie a towel on the floor.

The MORryde StepAbove system is available at Camping World and other RV suppliers. It typically sells for around $365 to $399 and comes in three- and four-rung configurations. Optional handrails are available.