More than just a top ski spot, this Colorado town is a year-round destination for lovers of the great outdoors

Originally settled as a mining town in the 1870s, Aspen, Colorado, is best known today as a ski resort. It’s a playground for the rich and famous who arrive in private jets and stay in multimillion-dollar second homes. On

our recent visit to Aspen, our group arrived in RVs and stayed in a campground. No matter what the transportation or accommodations, everyone enjoys the great outdoors, arts and culture. Friends invited us to join them for the Jazz Aspen Snowmass (JAS) June festival. 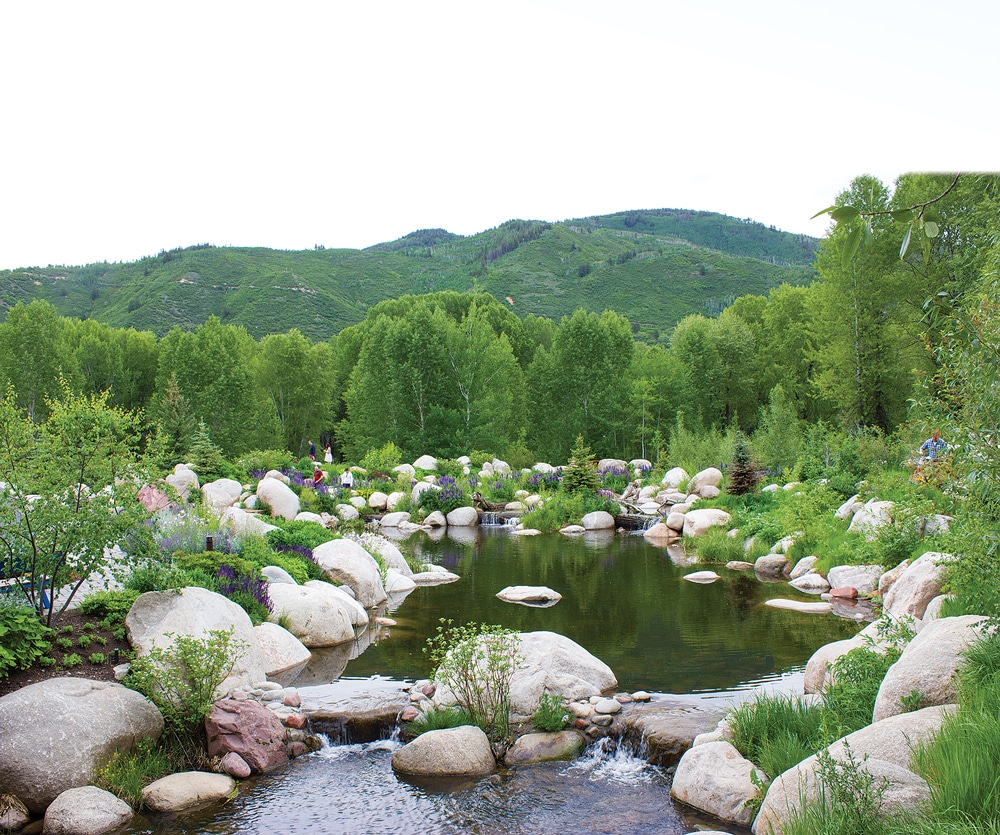 Set on the banks of the Roaring Fork River, the John Denver Sanctuary is lush with flowers.

JAS hosts two annual three-day festivals – one June 26-28, and the other during Labor Day weekend (Sept. 4-6) – as well as musical and educational programs throughout the year. A limited number of discounted general admission tickets go on sale in November prior to the event. These are called Blind Faith Passes because they are sold before the acts are announced. Our friends had faith and got their passes. By the time my husband, Jim, and I decided to go, those passes were sold out, so I bought tickets for the Friday and Saturday night entertainers, Diana Krall and Steve Winwood.
Much to my surprise, buying a ticket isn’t the only way to enjoy the entertainment. Music lovers on a budget bring chairs and blankets and sit on the lawn outside Benedict Music Tent, the open-air venue for the June concerts. On Thursday night we sat on a blanket in the garden surrounded by lupines and irises, and found we were close enough to hear the music.
The next two nights we enjoyed the entertainment from our seats inside the tent. We have been Diana Krall fans ever since we heard The Look of Love album in 2001. Playing a grand piano and singing in her sultry, smooth voice, Krall wowed the crowd with jazz standards such as “Let’s Fall in Love” and “Fly Me to the Moon.”
Before his successful solo career, Steve Winwood was a member of The Spencer Davis Group, Traffic and Blind Faith. On Saturday night he rocked the tent with songs he made popular in the ’60s, ’70s and ’80s, like “Gimme Some Lovin’” and “Higher Love.” These classics seemed to appeal equally to the younger set as well as those of us who grew up with his music.

A bike trail with sections of boardwalk, pavement and gravel runs along Highway 82 from Difficult Campground into Aspen.

We stayed at Difficult Campground in the White River National Forest 5 miles southeast of town. The campground sits above the Roaring Fork River. Dense forest of aspen, cottonwood and pine provide privacy for each campsite. There are no hookups for any of the 48 sites. Eight sites can accommodate a 35-foot RV, and one can hold a 40-footer. It’s a lovely campground, but if you have a big rig or can’t do without hookups and cellphone service, opt for RV parks “down valley,” as the locals say, toward Basalt and Glenwood Springs. Difficult Campground is open mid-May to late September.
While we filled our nights with music, our days were free for exploration. On Friday morning, we took a bike ride to Maroon Bells. A bike trail follows Highway 82 from the campground into Aspen. From there, an 11-mile paved road leads to the most photographed peaks in North America. On our return, we found our way through Aspen, but had to stop a few times to ask directions to Maroon Creek Road, which is a popular route for cyclists for two reasons. First, the scenery is spectacular.
Second, between the hours of 9 a.m. and 5 p.m. the road is closed to motorized vehicles except for buses and registered campers staying in designated campsites. This paved ride is ideally suited to skinny-tire road bikes, although it’s doable on fat-tire mountain bikes. It just took us a bit longer on our heavier, slower bikes. From the parking lot at Maroon Bells, we took the short walk to Maroon Lake. Both of the “Bells,” Maroon Peak and North Maroon Peak, are 14ers, which means they are more than 14,000 feet high. The clear blue skies, snow-covered peaks, green valley and picturesque lake rival the Swiss Alps. On the way down the mountain, we spotted moose and deer feeding in Maroon Creek.

The ghost town of Ashcroft, a former silver mining town in the 1880s, is preserved by the Aspen Historical Society.

Since we’d worked up appetites on our ride, we met some friends at Justice Snow’s Restaurant in downtown Aspen. Devils on Horseback, an appetizer of bacon, dates and goat cheese, was so good that I’ve ordered them at several restaurants since then. I loved my beets and kale salad, and others were happy with their burgers. From our sidewalk table we watched children play in the world’s first computerized dancing fountain, which was built in 1979. Afterward, we browsed the shops in the charming downtown.
On Saturday, eight of us hiked a trail from the campground in the Collegiate Peaks Wilderness. It was a 6-mile round-trip hike with almost 2,000 feet of elevation gain. The trail was often steep and rocky. About halfway up the mountain, our friend’s daughter, Nicole Robertson, could tell by the look on my face that I was dreading the next climb. She offered to push me up the hill. I couldn’t imagine how this would work. She bent over slightly, put her hands below my waist, and started walking. It was magic, like I was being carried. I went from wondering if it was wise to keep up with this younger group, to thinking I should include 20-somethings in all my vacation plans.

On this musically inspired weekend, a visit to the John Denver Sanctuary was a must. John Denver, a well-known performer, songwriter and environmentalist, made Aspen his home until his untimely death in a 1997 airplane crash. His love for Colorado and the Rocky Mountains inspired many of his songs. Fans and friends honored him with this memorial. Set on the banks of the Roaring Fork River, its gardens are lush with flowers. The lyrics of his popular songs are etched into the large rocks artfully arranged in John’s Song Garden. As I strolled the sanctuary, I found two of our friends standing in front of one such boulder singing a lovely a cappella rendition of “Rocky Mountain High.” The beauty of this spontaneous act brought tears to my eyes. 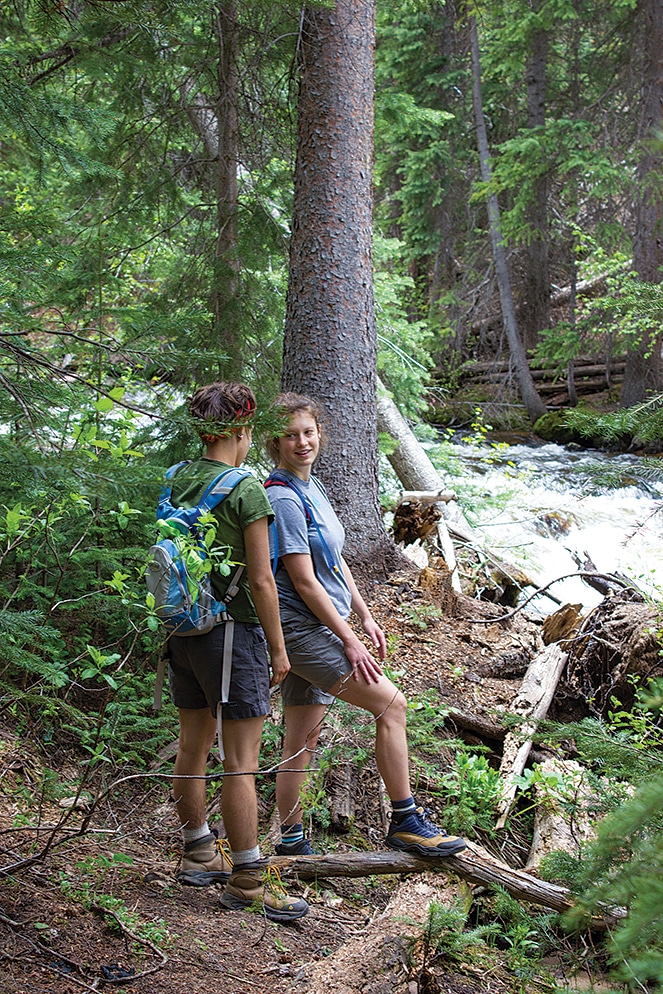 Sophia Clark and Nicole Robertson pause by Difficult Creek during a hike in the Collegiate Peaks Wilderness near Difficult Campground.

On Sunday afternoon we drove down valley to Glenwood Springs for the 117th Annual Strawberry Days Festival. While there was plenty to attract visitors, including an arts and crafts fair, food vendors and rides for kids, it was the music – once again – that enticed us. Let Them Roar, a popular local band described as “an American musical melting pot,” took the stage at 2:30 p.m. This six-member band collaborates to write most of their music, which is a fusion of bluegrass, jazz, and country-western. We didn’t want to miss a minute of their performance since our friend’s daughter, Sophia Clark, is one of the singers.
While the rest of our group returned to work on Monday, Jim and I explored more attractions. The Aspen Center for Environmental Studies (ACES) is a nonprofit environmental science education organization with four sites in the Roaring Fork Valley, including the Catto Center at Toklat. Eleven miles from Aspen on Castle Creek Road, Toklat is a gathering place for cultural and ecological discourse. It was once the family home of one of ACES’ founders, Stuart Mace. He met Elena Gonzalez Ruiz in 1987 in Oaxaca, Mexico, when he went there looking for an alternative to Navajo rugs. Elena is one of 3,000 Zapotec weavers in her village. For the past 25 years, she has been spending four months a year as the Artist in Residence at Toklat. In her demonstrations, Elena explains how the wool is sorted, cleaned, and spun into yarn, dyed with natural pigments and woven on looms into colorful rugs. This tradition of weaving has been passed from generation to generation in her village of Teotitlan del Valle since 1465.
The ghost town of Ashcroft sits across from Toklat. In 1880, two prospectors found silver in Castle Creek Valley. By 1883, the mining town boomed to a population of 2,000, with two newspapers, six hotels and 20 saloons. It quickly went bust, with the population dwindling to 100 by 1885. The land was deeded to the U.S. Forest Service in 1953. Today, the Aspen Historical Society preserves nine original buildings.
Our visit to Aspen proved that you don’t have to be a member of the jet set to appreciate the best of what this area has to offer. Our “RV set” enjoyed the beautiful scenery, sounds of music and nature, delicious foods and lush gardens.

Our group stayed at Difficult Campground in the White River National Forest 5 miles southeast of town.