Around the West in 30 Days 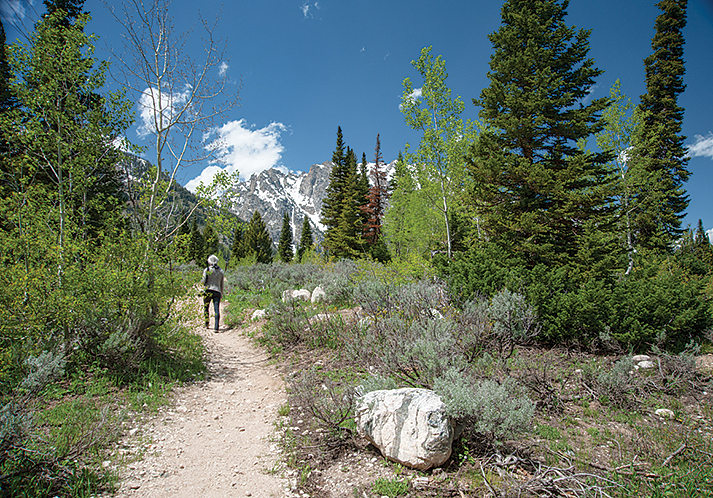 Maybe you can relate. You and your partner brainstorm trip ideas and come up with a plan. Pretty soon, details intrude, and the final plan looks nothing like the one you started with. For my wife and me, what began as an RV trip to the Canadian Rockies from our home base in the San Francisco Bay area turned into more, much to our delight.

We squeezed a 4,000-mile loop into 30 days, visiting Grand Teton, Yellowstone and Glacier national parks on the U.S. side of the border, then touring Banff, Jasper, Yoho and Glacier national parks in western Canada, and finishing with Olympic and Redwood national parks back on home soil. A magazine feature can’t cover all of these destinations in depth, but it can provide some inspiration and useful tips, should you wish to attempt a similar trek in your RV.

The main attraction of this relatively small Wyoming national park is the jagged peaks of the Teton Range, and they are definitely worth at least an overnight stop (see “Autumn in the Grand Tetons” in the September 2015 issue for more details).
Tip 1. If your rig is 30 feet or shorter, camp at the park’s Signal Mountain Campground on Jenny Lake and take some of the hikes from there. The Jenny Lake Loop Trail is a good one at just over 7 miles.
Tip 2. Vehicles pulled to the side of the road signify a four-legged attraction. Stay at a safe distance when taking photos, and do not leave your vehicle to take a picture of a bear.

Mammoth Hot Springs in Yellowstone National Park has a visitor center, restaurants, the remnants of an old fort, interesting trails and photogenic topography.

The much larger Yellowstone is adjacent to Grand Teton. Spreading into Idaho and Montana but located mostly in Wyoming, Yellowstone is famous for its geysers and wildlife, and rightly so. Old Faithful performs as advertised, and those bison we’ve all seen in photos do saunter down the roads in no particular hurry. To get an overview, drive the Grand Loop Road (actually two loops shaped like a figure eight), then return to some of the trails and sights encountered along the way. Mammoth Hot Springs is a must.
Tip 3. In the park, camp at Madison Campground. It’s strategically located between the two loops mentioned earlier, and at 6,800 feet, it’s lower than the others and warmer in cool weather. One day we went from driving in a snowstorm to having dinner in shirtsleeves at Madison. Plus, it’s close to the village of West Yellowstone, the site of our exit from the park, and maybe yours.
Tip 4. Anglers rejoice: The park encourages catch-and-eat fishing of nonnative lake trout in Yellowstone Lake.

We visited in early June, and the only road that bisects Montana’s Glacier National Park was still closed, so our options were limited. We elected to enter from the east side, as it’s more strategic when crossing the border to head to Banff. 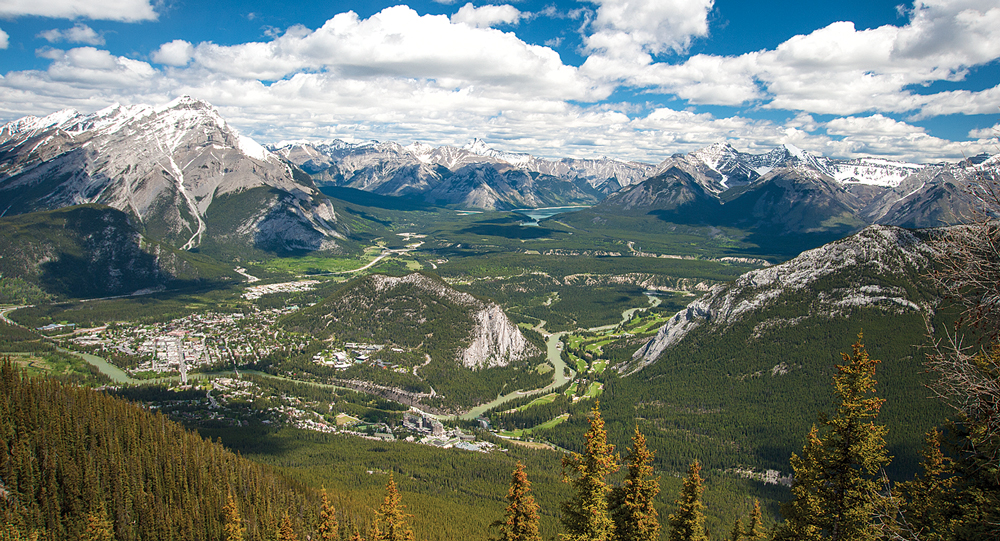 The only excuses for not taking the Banff gondola to the top of Sulphur Mountain are bad weather or fear of heights. Views of the surrounding countryside are not to be missed.

Glacier isn’t going to make the RV Driver’s Hall of Fame, as there are few places you can go while towing a trailer or fifth-wheel. Going-to-the-Sun Road, the route that traverses the park and provides access to most of the marquee sights, isn’t suitable for anything larger than a truck camper or camper van driven by a brave person. Vehicle combinations longer than 21 feet (including bumpers) or wider than 8 feet (including mirrors) are prohibited. If you don’t fancy sheer drop-offs and hairpin turns, take advantage of the park’s shuttle system and tours in vintage red buses.
Tip 5. We recommend Many Glacier Campground, accessed via a dead-end road a few miles north of the St. Marys Visitor Center. It’s quiet and secluded but doesn’t offer RV hookups. Two moose wandered behind our campsite with calves in tow.

Banff is famous for the Alberta Rockies and Lake Louise, and is also famously popular during high season, which translates to crowded. The town of Banff is a tourist hotspot filled with shops and restaurants. Visit the somewhat unheralded Buffalo Nations Luxton Museum, which documents and pays tribute to what Canadians call First Nations, the native peoples of the region. Lake Louise is a must-see, along with smaller but pretty Moraine Lake. And definitely take the gondola to the top of Sulphur Mountain, with incredible views. Leaving Banff for Jasper, take the Bow Valley Parkway (Highway 1A), rather than the more expeditious Highway 1, the TransCanada Highway, and stop at impossibly blue Peyto Lake.
Tip 6. Camp at Tunnel Mountain Village, the best of the national park’s campgrounds. Village I has RV campsites but no hookups, Village II has electric hookups, and Tunnel Mountain Trailer Court has full-hookup sites.
Tip 7. Canadian parks, national and otherwise, are dog-friendly. Dogs need to be leashed, but they can join you. We took ours on almost every trail we hiked. 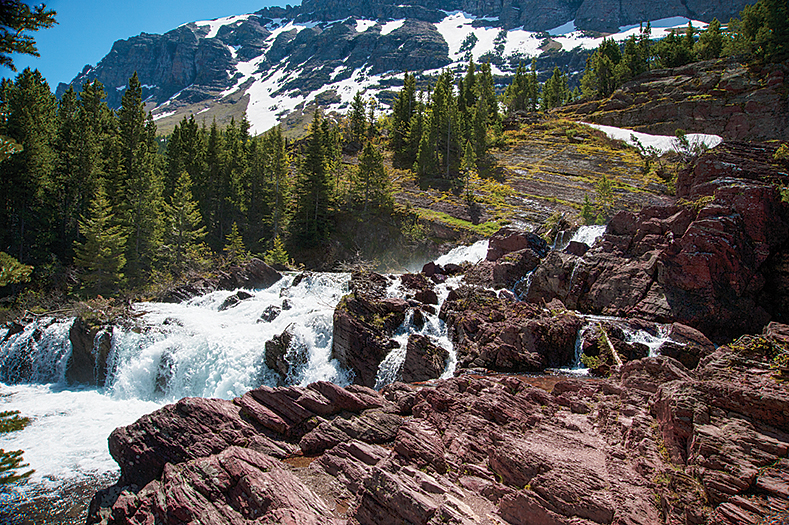 The Swiftcurrent Nature Trail starts at Many Glacier Campground in Montana’s Glacier National Park. You can hike some or all of its 5-plus miles to pretty waterfalls and remote alpine lakes.

The village of Jasper, Alberta, feels like a real town catering to a local population, not just tourists. The ride up the Bow Valley Parkway is worth the trip in itself, but local attractions include the Columbia Icefield, a significant glacier offering tours on special buses, and lovely Maligne Lake. Mount Edith Cavell makes for a nice day hike to some modest but pretty glacial areas.
Tip 8. Camp at Whistlers Campground. It and nearby Wapiti Campground are generally touted as the best sites relatively close to town.
Tip 9. Most of these parks are in bear country, both black and grizzly. When hiking, carry bear spray, which is pepper spray on steroids and can be discharged from 35 feet away. While we were in Jasper, a cyclist was attacked by a grizzly on a road we had traveled and was probably saved when the bear bit into his backpack containing a bear-spray canister that discharged.

Backtracking to Lake Louise, we crossed the Rockies on the TransCanada Highway toward Golden, British Columbia. Attractions here include Emerald Lake, Lake O’Hara and 830-foot Takakkaw Falls, Canada’s tallest unbroken waterfall. The latter is accessible only on foot or by shuttle bus.
Tip 10. Camping options in this area are limited. Shortly after crossing into British Columbia, you can camp at Kicking Horse Campground, the largest campground in the national park, with flush toilets and showers but no hookups. We chose to move farther along and stayed at Golden Municipal Campground, with 72 sites and full hookups.

In British Columbia’s version of Glacier National Park, bighorn sheep aren’t just a speck on the horizon glimpsed through binoculars.

Unlike the U.S. version, this British Columbia park is a series of pull-offs that always lead to something interesting. Signage tells you what to expect.
Continuing along the TransCanada Highway, you leave the mountains and begin a descent into what Canadians call the Thompson Okanagan, their wine country. Where grapes grow, so do other things, like fruit and veggies. Partake.
From Vancouver, take the ferry to Vancouver Island to explore the capital city of Victoria.
Tip 11. On Vancouver Island, we made a side trip to remote Tofino and Ucluelet on the island’s far-west coast. The effort to get to these charming seaside villages is great, three or more hours each way on a narrow road. If you’re tired of driving or have a large RV, you may want to skip this detour. 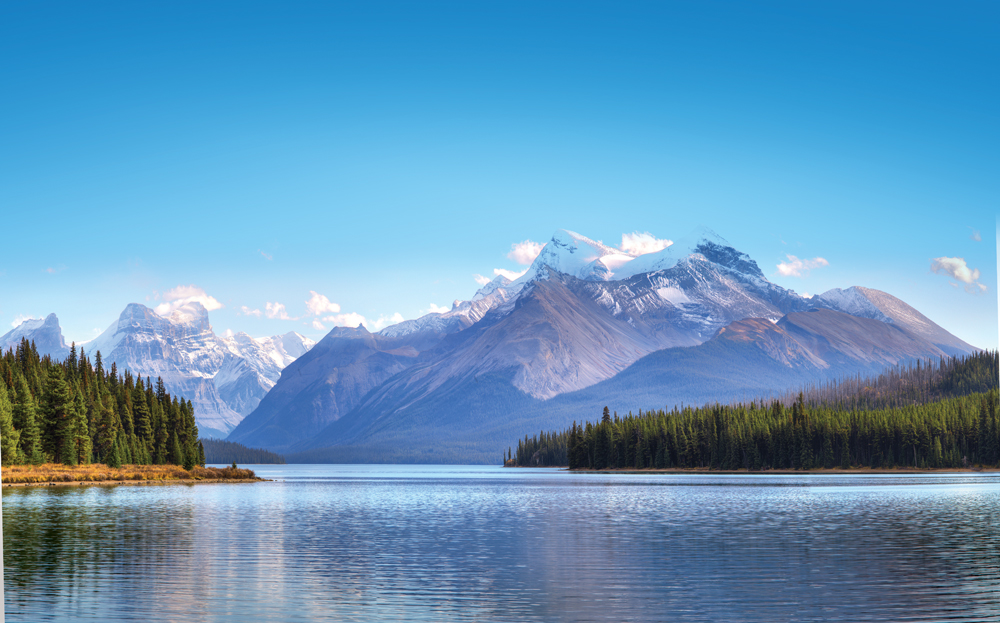 leads to glistening Maligne Lake, the largest natural lake in the Canadian Rockies.

Back in Victoria, we took the ferry to Port Angeles, Washington, and our penultimate national park. Located in the northwestern part of the state on a peninsula of the same name, Olympic is a large and diverse national park, including old-growth rainforest, coastal beaches and snowcapped peaks. If the weather cooperates, it is a fine place to do some hiking. Drive your tow vehicle to Hurricane Ridge for trails with panoramic views of the snowcapped Olympics — again, weather permitting.
Tip 12. On the ferry to Port Angeles, a full-time RVer suggested a favorite campground not far from the ferry landing, and we took her advice. Salt Creek Recreation Area is 40 minutes from the ferry dock and right on the Pacific Ocean. It’s a Clallam County Park with everything from tent sites to 50-amp hookups. We liked it so much that we took an impromptu layover.
Tip 13. Instead of camping in the main part of Olympic National Park, head toward Forks and La Push, and stay at Mora Campground, with campsites for RVs up to 35 feet. It’s a quiet place on the Quillayute River and a short hike to the Pacific Ocean and the towering sea stacks of Rialto Beach.

Down the coast in Northern California, on the outskirts of Redwood National Park, Patrick’s Point State Park delivers tall trees and ocean views.

This Northern California national park is truly unique, as it shares management responsibility with the California Department of Parks and Recreation. Together, they oversee several state parks that are among California’s finest. This part of the state is sparsely populated and far enough away from major urban centers that it is not subject to the recreational pressures that plague parks closer to San Francisco. You have it all here: pristine forests of old-growth redwoods, wild and scenic rivers, ocean beaches.
For those who prefer things more rustic, Six Rivers National Forest is at your doorstep. For a more civilized diversion, there’s the Victorian village of Ferndale. Don’t pass up a day hike into Fern Canyon.
Tip 14. If your RV is shorter than 27 feet, camp at Elk Prairie Campground in Prairie Creek Redwoods State Park, and you may see as many Roosevelt elk as fellow campers.
Tip 15. Cross the bridge to the small island of Samoa (the stateside version), just outside Eureka, for an all-you-can-eat experience at the historic Samoa Cookhouse, a former lumber-camp kitchen where they feed you like you just came out of the woods. Leave your chainsaw in the truck. 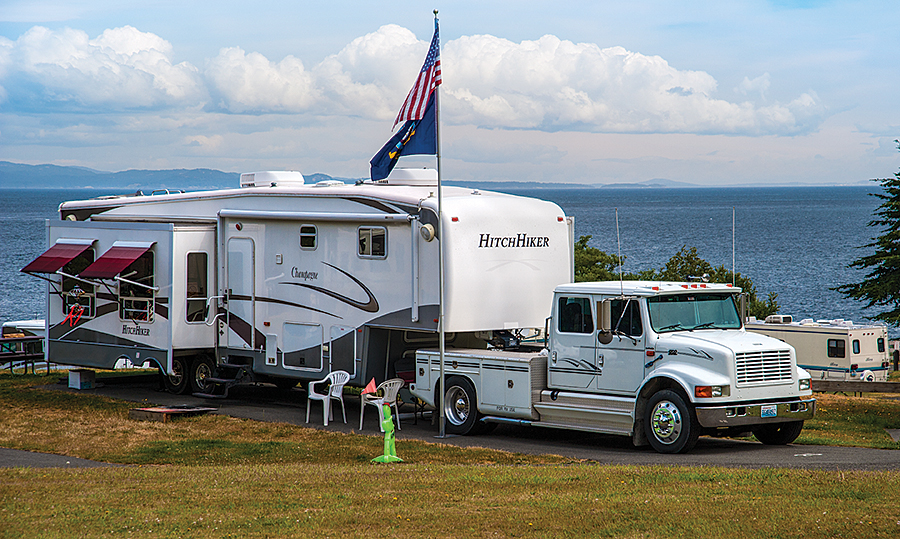 All nine national parks have public campgrounds that accommodate RVs, and we had no trouble finding sites for our 20-foot Winnebago Travato. Check the individual national park websites for RV-length restrictions, and make reservations in advance when possible, particularly if you have a sizable RV and require a larger campsite.
Commercial campgrounds and resorts that accommodate larger RVs can generally be found close to the national park entrances. For information about RV campgrounds and Good Sam Parks near the national parks, go to www.goodsamcamping.com.
We tend to forget that trains were once an important mode of transport, now greatly diminished. In Idaho, Montana and Canada, the railroads are alive and well. RV parks in these areas are often close to the tracks, and many a night will find you serenaded by a 200-piece orchestra of percussion and horns.