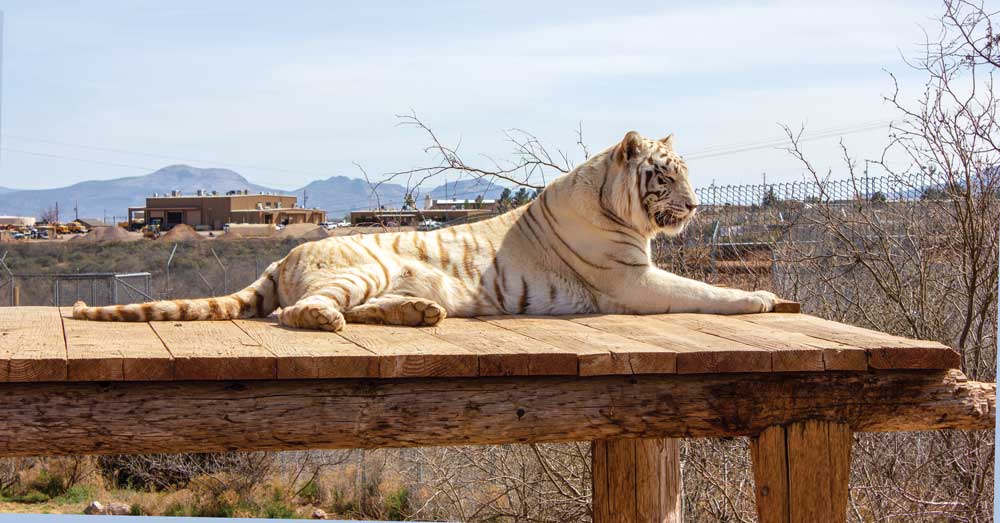 Several years ago, my husband, Jim, and I saw a billboard for Bearizona, a “drive-thru wildlife adventure” in Williams, Arizona, 25 miles west of Flagstaff. I loved the idea; it reminded me of an African safari, which we’ve never done, or a drive through Yellowstone National Park, which we’ve done numerous times. Once I picked up a brochure for Out of Africa, a wildlife park near Sedona, we decided it was time to check out a few of Arizona’s wildlife parks on our next visit to the Grand Canyon State.

Since all four of the wildlife parks we planned to visit were within a two-hour drive from Sedona, we decided to stay there for a week. Sedona is one of the prettiest cities I’ve ever visited. As luck would have it, the Sedona Film Festival (February through March) coincided with our visit. When we weren’t wandering through wildlife parks, we were hiking or seeing films.

Chalet, a white Bengal tiger, relaxes in the sun at Out of Africa in Camp Verde, south of Sedona.
Photos by Mary and Jim Zalmanek

Out of Africa in Camp Verde, 30 miles south of Sedona, was the first stop on our itinerary. While many of the mammals, birds and reptiles are natives of Africa, the 104-acre wildlife sanctuary is also home to animals from Asia, and North and South America. On the African Bush Safari Tour, we encountered free-roaming giraffes, zebras and antelope. Everyone on the tour was given a treat to feed the giraffes. We could either offer this food in our outstretched hands or held in our teeth. Those of us who were willing to get up close and personal with the giraffe’s 15- to 18-inch prehensile tongue were rewarded with a kiss.

Getting There:
Sedona, Arizona, is located about 115 miles north of Phoenix. From the capital city, take Interstate 17 North 98.4 miles toward Flagstaff, then take Exit 298 and turn left onto State Route 179. Continue 14.2 miles on SR 179 to State Route 89A. This intersection is known as the “Y.”

That afternoon, a large crowd gathered at Tiger Splash Arena to see Bengal and Siberian tigers and their caretakers romping and diving in a large pool. The animals are not trained or coerced to perform. “We don’t train them. They train us,” the emcee said. A caretaker ran around the pool holding a pole with an inflatable pool toy at the end. A tiger was in hot pursuit, eager to get his claws into the toy. Often one of the human handlers would jump in the pool, followed by a predator, making an even bigger splash. I’m not sure who had more fun: the two predators, the four caretakers or the numerous spectators. When the show ended, a line formed of people who wanted to feed the tigers. Each person got two bite-sized pieces of meat to feed the animals through a protective fence using tongs.

At the Predator Feed, we saw animals eating with natural gusto. Three days a week, members of the feeding crew toss large hunks of raw meat over a high chain-link fence to the hungry lions and tigers. Their diet includes beef, chicken, salmon and turkey. As we followed along on this walking tour, we saw the predators devour 18- to 22-pound turkeys and heard the crunch of turkey bones. The caretakers fed the hyenas through the fence. The crowd seemed to be especially entertained by hearing the hyenas “laugh” in eager anticipation of each bite. At the grizzly bear enclosure, the bear named Cypress waited at the fence, displaying her powerful paws with long, curved claws. 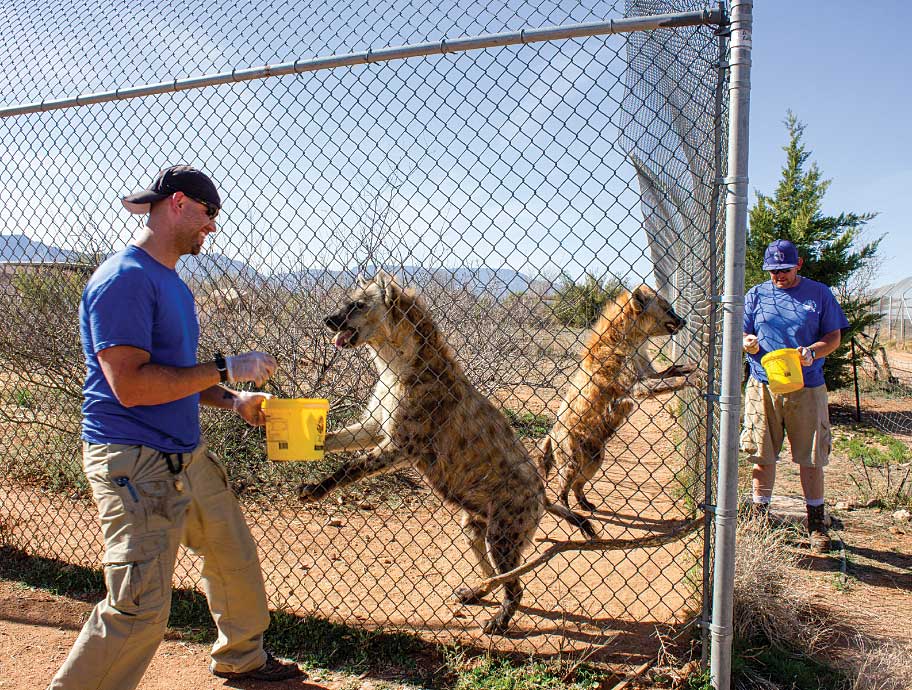 The hyenas laugh in eager anticipation of each bite during the Predator Feed at Out of Africa.

Caretakers in the Giant Snake Show revealed the gentler side of these often-feared reptiles. The park’s anacondas, pythons and boas are accustomed to being handled by people. Brave members in the audience volunteered to participate in the show. They were invited into the enclosure. It took five adults and one child to hold the 3-year-old yellow reticulated python.

Located in Litchfield Park east of Phoenix, Wildlife World Zoo, Aquarium and Safari Park is a two-hour drive from Sedona. It was well worth the drive since it has Arizona’s largest collection of exotic and endangered animals. More than 600 separate species, and between 5,000 and 6,000 individual animals – it’s challenging to count all those little fish – reside here. Started in 1975 as a breeding center for rare wildlife, it opened to the public in 1984. The park covers 215 acres.

With so much variety, we took advantage of some of the zoo’s rides to see things from a different perspective. On the Skyride, a chairlift took us by giraffe, Arabian oryx, kangaroo and other animals on our leisurely 15-minute round trip. The 650-foot-long Soaring Eagle Zip Line was over in a flash, but we got a bird’s-eye view of the park and the deer below us. In the 15-acre Safari Park, we traveled through animal exhibits by tram to see ostriches standing guard over recently laid eggs, and wildebeests and springbok antelope relaxing in the shade. We caught the African Train for a 5â„8-mile-long ride past gazelles, crowned cranes and the Kids’ Petting Zoo.

Throughout the zoo, we noticed the wide variety of birds. We admired the Vulturine guinea, lory parrots, crowned cranes, flamingos and Mandarin ducks, to name a few. It’s not surprising that the facility would have an impressive collection since Mickey Ollson, the owner, initially used the property as a breeding farm for exotic birds in the mid 1960s. 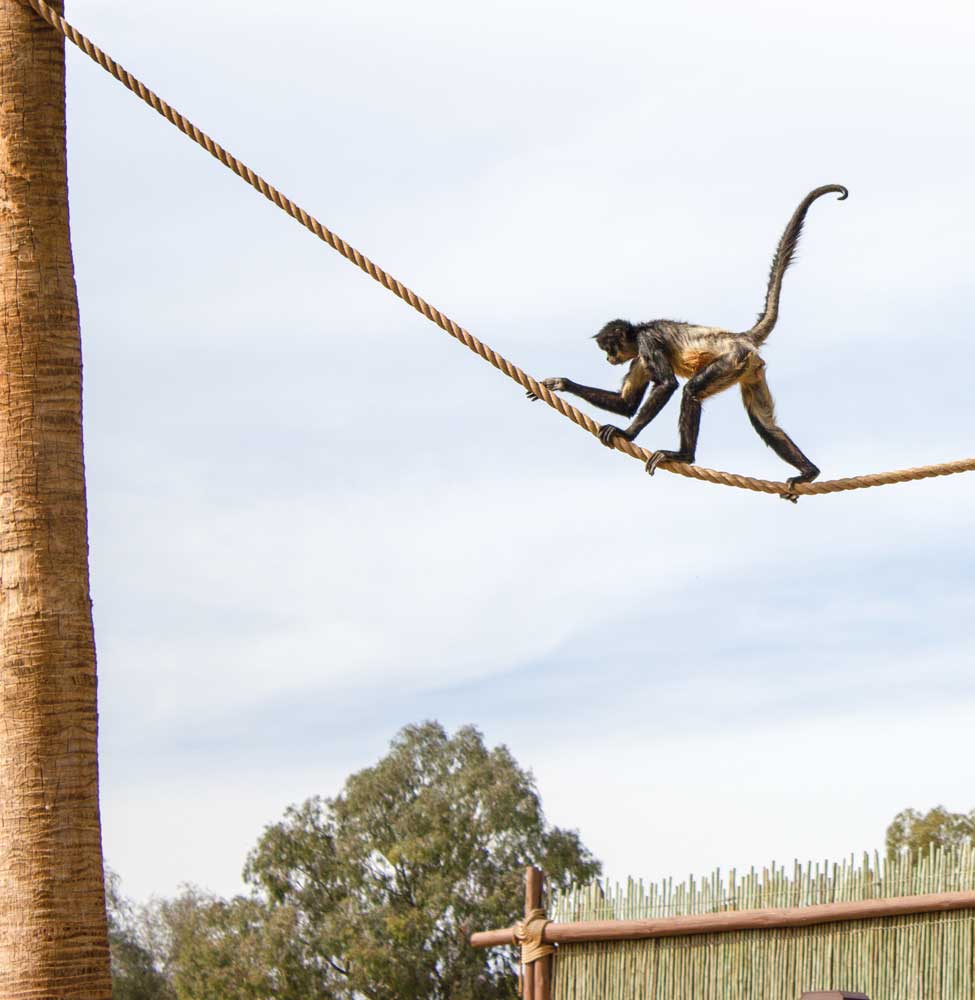 A spider monkey crosses the rope strung between trees on an island in Wildlife World.

Since the aquarium stays open three hours after the zoo closes, we saved that for last. The aquarium consists of four buildings housing hundreds of fish, amphibians, invertebrates and reptiles. We made our way to The Wild and the Wonderful building in time for the Sea Lion Show at Shipwreck Cove. The stars of the show were the California sea lions. These highly intelligent marine mammals were playful and hungry. On land they awkwardly waddled around on their flippers, but in open water those flippers on their torpedo-shaped bodies help them swim in a burst of speed up to 20 mph and dive to depths of up to 900 feet.

At the Stingray Touch Tank in the Predators building, we were able to feel those slimy, gentle creatures. There’s no need to worry about getting stung since aquariums remove the barbed tips, called spines, before the rays are placed in the touch tank. I liked touching the rays, but enjoyed watching the wide-eyed reactions of the children doing the same thing even more.

Heritage Park Zoological Sanctuary is in Prescott, about 70 miles south of Sedona. The 10-acre facility was the smallest of the four we visited, but it has a powerful mission. Animal residents have been rescued from other locations. Signs on enclosures introduce the animals by name, range, habitat, diet, general information and the circumstances that brought them to the sanctuary. Shash, an American black bear, was abandoned when his mother was killed by a hunter. The collection of four ring-tailed lemurs, an endangered species native to Madagascar, began when another zoo no longer had room to keep them. Fabio and Maverick, a pair of pronghorns, were rescued from the wild after one was injured and the other was orphaned.

The Tarantula Grotto is home to one of the largest collections of tarantulas in the Southwest, plus some scorpions and roaches. Tarantulas may look scary, but most of the 900 species are harmless to humans. The same claims can be made about scorpions – scary yet harmless – but stings can be quite painful. Even so, scorpion stings rarely require medical attention.

Heritage Park offers several opportunities for children and adults to interact directly with friendly animals. In a central area, we saw a group of volunteers and visitors admiring a miniature horse. The goats in the Kiwanis Korner Animal Encounter seemed to enjoy having their coats gently brushed by curious children. 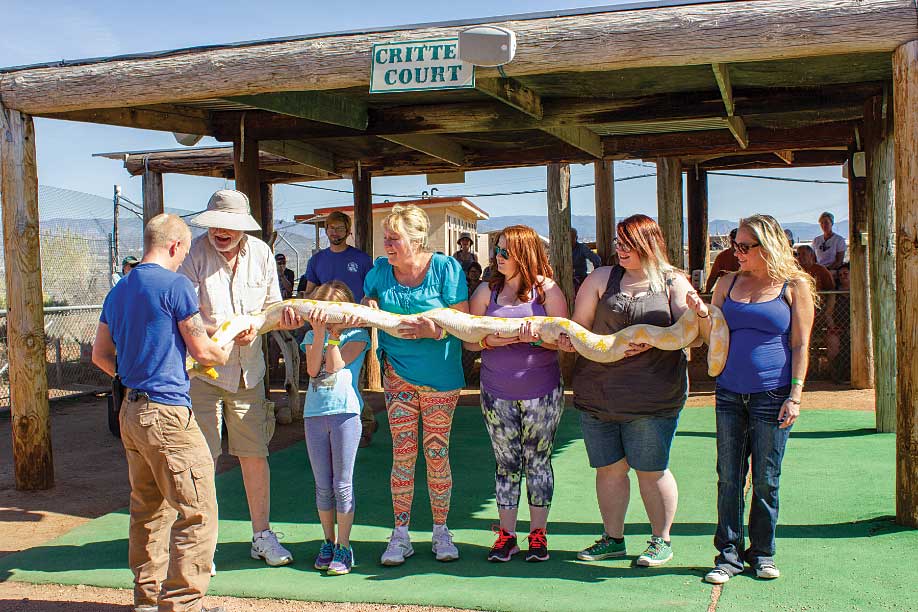 Five adults and one child hold the 3-year-old yellow reticulated python during Out of Africa’s Giant Snake Show.

Mexican gray wolves were hunted to the brink of extinction in the late 1800s through the mid 1900s. They were declared endangered in 1976. Heritage Park participates in the Association of Zoos & Aquariums Association’s Species Survival Plan. According to www.heritageparkzoo.org, “After a 20-year absence in the wild, this animal is being reintroduced to its former range following a successful captive breeding program. The sanctuary is a housing facility for wolves not yet ready for release.”

Bears, Raptors and one Wild Ride

We ended the week at Bearizona. This 160-acre park featuring North American wildlife opened in May 2010. More than half of the animals in the park are rescued or rehabilitated. We began our tour in Fort Bearizona, a 20-acre walk-through area that houses smaller and baby animals on exhibit. We arrived just in time for the river otter feeding. These playful creatures delighted the kids in the audience. Dave O’Connell, one of the animal keepers, convinced a few spectators to toss fish to the eager otters, Louie and Isaac, which further excited the kids.

At the High Country Raptor show, we learned interesting facts about hawks, owls and falcons. When the animal handler asked for a volunteer, Jim raised his hand (with a little encouragement from me). To demonstrate the silent flight of the owl, the handler placed a blindfold and Mickey Mouse ears on Jim. She told him to raise his hand when he heard Malaki, the Eurasian eagle owl, fly overhead. He never heard the owl in flight, only when he landed on the perch directly above his head.

After exploring the walk-through area, we headed to the Wild Ride Bus, a 50-passenger bus without glass in the windows. On the 3-mile drive though the ponderosa forest, a Bearizona staff member entertained us with stories about Bearizona’s history and some fun facts about the animals and the habitats in which they live. For example, the horns on a bighorn sheep weigh more than all their other bones combined, and a bear cub is the size of a stick of butter when it is born. 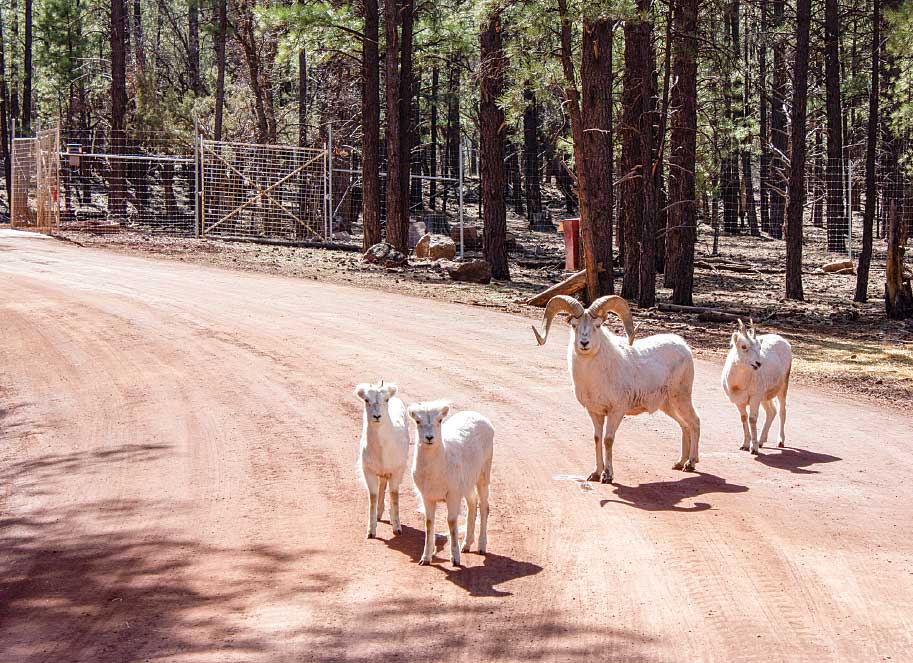 Bearizona’s bighorn sheep have space to roam in the park’s drive-through area.

Visitors can drive their own cars or motorhomes through the animal habitats. For people who arrive by bicycles, motorcycles or convertibles, Bearizona provides courtesy cars, free of charge. After the bus ride, we drove our dinghy vehicle through to get some more photographs. In addition to 38 black bears, we saw bighorn sheep, bison, wolves and mountain goats.

When we ended our zoo-hopping adventure, I had a deeper respect for these facilities. They care for animals that have been injured or neglected, ensure the survival of species with breeding programs and instill a respect for animals in future generations. Not only that, it’s a wonderful way for people of all ages to experience Arizona’s wild side. 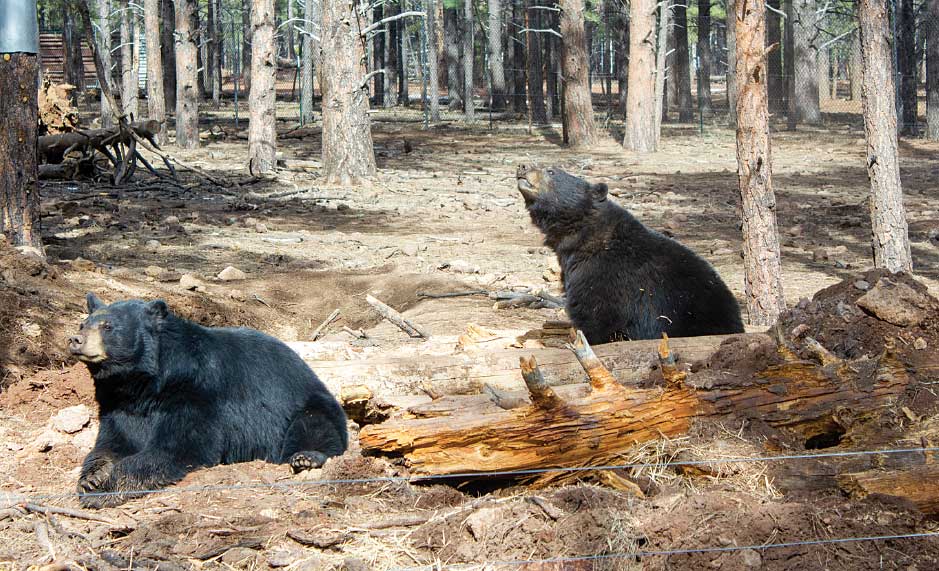 Bearizona’s black bears have plenty of space to roam in the drive-through area of the park.