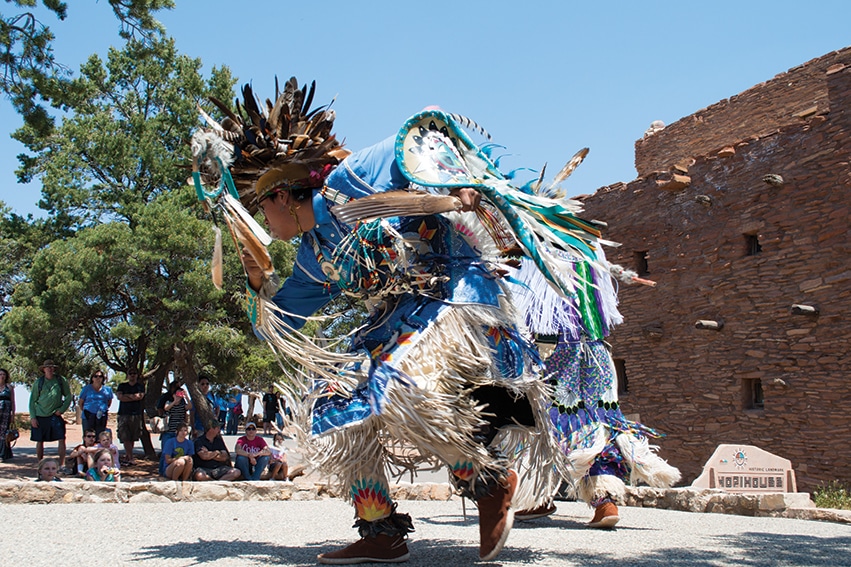 The Grand Canyon, One of the Seven Natural Wonders of the World, is a Colorful Landscape of Beautifully Preserved Ancient Rocks Layered in History

On each of our previous visits to the Grand Canyon — there have been half a dozen over the years — our first glimpse into the mighty abyss was always either in broad daylight or at sunset. No matter the time of day, it seems, the canyon presents a spectacular light show, the colors of the massive bluffs changing almost imperceptibly as you watch. This time we decided to see what wonders sunrise might bring.

There are stretches along the South Rim, our destination, that visitors aren’t allowed to drive in their cars, but a shuttle bus service — the best bargain in the park — is available for free (all you need is a park entrance permit). There are four different color-coded routes, and the buses can be boarded at a variety of locations. It’s a terrific system, not only for visitors’ convenience, but also in that it reduces air pollution by taking nearly half a million vehicles off park roads (according to park literature). In the summer, most of the buses begin their daily trips at 4:15 a.m., except those on the “purple” route, which runs along South Entrance Road and Arizona Highway 64 to Tusayan, a mile south of the park entrance. Grand Canyon Camper Village and RV Campground where we stayed is there, as are the Grand Canyon Chamber of Commerce and Visitors Bureau, the IMAX Theater and gift shop, and a string of hotels and shops. The first bus leaves Tusayan at 8 a.m., which we made use of on other occasions.

Hopi dancers leap in their intricate costumes at El Tovar.

This time, we drove in the pre-dawn to Grand Canyon Visitor Center to catch an “orange” shuttle that would take us, along with a handful of others, the few miles to South Kaibab Trailhead (where one man got off, planning to hike the trail barefooted) and on to 7,262-foot-high Yaki Point, the highest elevation in the park and the shuttle route’s eastern end, where we would watch the sun come up. Yaki Point’s location, where it stretches far out into the canyon, makes it one of the most sublime places imaginable to be at daybreak.
By now the sky at the horizon had paled to dull gray, though the canyon below us was still hidden, shrouded in blackness. But sunrise happens quickly, first as a bit of bright orange appearing beneath a long swath of gray cloud over the purple hills. The sky, soon gold at the horizon, fades to yellow higher up and pale blue overhead — and suddenly the stair-step bluffs, terraces, pedestals and other stone elements of the canyon begin to take shape. Far below, we could just make out the zigzag fingernail-scratch that
is South Kaibab Trail.
Then the sun popped above the cloud in a burst of fiery yellow, its rosy-gold rays splayed against distant bluffs like spokes, and a vibrant pink spread along the horizon. The dome of sky washed to even paler blue as the sun advanced, and as light poured into the canyon, indigo-blue “smoke” lightened to turquoise. Then, as if a series of electric switches was being turned on, the mighty bluffs were illuminated one-by-one to the canyon floor. Stone — in shades of camel-tan, bronze or ash-gray in midday — is cloaked in richer hues of purple, burgundy, rose and gold in the early morning. (We came back later that day for comparison.)

Steam engine #4960 backs off the main line of the Grand Canyon Railway in Williams. The line runs daily 65-mile trips to the canyon with diesel and steam engines.

The canyon is, of course, the main reason some 4.5 million visitors come here from all over the world every year (park literature is available in Japanese, German, French, Italian, Spanish, Chinese and Korean, as well as English). The park offers other attractions, including Hopi House, El Tovar Hotel, Kolb Studio, Desert View Watchtower, a geology museum at Yavapai Observation Station, Tusayan Museum and Verkamp’s Visitor Center. There are trails, lodges, campgrounds, restaurants and visitor centers and, of course, the famous mule rides.
Hopi House, designed by renowned Southwest architect Mary Colter, was built to resemble an ancient Indian pueblo. The imposing structure, built largely by Hopi workmen using native wood and stone, was made a National Historic Landmark in 1987.
The Harvey Company, which operated first-rate hotels and restaurants along the Santa Fe Railroad beginning in 1876, opened Hopi House in 1905 as a gallery and to sell Native American arts and crafts. Navajo rugs and basketry, and gorgeous silver, coral and turquoise jewelry made by Navajo and Hopi artisans are available, as are T-shirts and other souvenir items. In a courtyard outside, ornately costumed Hopi dancers perform at various times.
El Tovar is across the road at the edge of the canyon. New in 1905 and named for Spanish explorer Pedro de Tovar (who led the first expedition to Hopi Indian country 365 years earlier), the rustically elegant 100-room structure includes a sumptuous hotel, dining room (dinner reservations required; call 928-638-2631, ext. 6432) and gift shop that sells fine Native American jewelry and much more. Originally run by the Harvey Company, El Tovar once had greenhouses for growing fruit and vegetables, a steam generator to power electric lights and even its own dairy.
Nearby Kolb Studio, also on the National Register of Historic Places, was built by brothers Ellsworth and Emery Kolb, photographers and river rafters who came to live at the canyon in 1902, 17 years before it was made a national park. They were the first to document a boat trip down the Colorado with a movie camera. The former studio is home to exhibits and an extensive bookstore.
Yavapai Point and Geology Museum are a short drive west of Mather Point, one of the most popular sites for viewing the canyon. The museum, dedicated in 1928, displays a floor-to-ceiling model of the canyon’s stone layers, a three-dimensional relief map and other exhibits that interpret the geologic forces that created the “magnificent abyss” and examine its human history. Best, however, is the panoramic view through the windows.

Rustic Kolb Studio, perched at the edge, a mile above the Colorado River.

Cylindrical Desert View Watchtower about 25 miles east of Grand Canyon Village, was also designed by Mary Colter and was built in 1932 by Hopi artisans. Murals by Hopi artist Fred Kabotie are featured on the second level of the 70-foot tower; there’s also a gift shop. Desert View Visitor Center is nearby, as is a trading post and market. Three miles west is Tusayan Ruins, the crumbling remains of a pueblo built around 1185 A.D., excavated in 1930 but, uncharacteristically for the time, never restored. A museum here interprets 12th-century human life at the Canyon.
As anyone who has been to Grand Canyon knows, trying to describe it is virtually impossible. Words, even pictures, don’t do it justice. More difficult still is trying to fathom the amount of time that has passed since the canyon began to take shape. Park rangers offer various programs at several locations on this subject and many others.
Among them are “Grand Canyon Ecology” dealing with the canyon’s “life zones;” “History Talk” about the people who, over the centuries have called the canyon home; “Critter Chat” about the canyon’s wildlife (250 species of birds, 70 species of mammals, 25 species of reptiles and five species of amphibians); and “Geology Walk” about the canyon’s amazing story. There are also several ranger-led hikes and bicycle tours. As we’ve found to be typical of the national parks, the programs are all first-rate.
“Geology Walk,” a half-mile walk along the rim observing how the canyon came to be, is especially interesting. A ranger explains how, about 70 million years ago, a large part of what would become the southwestern United States began to rise. Colliding tectonic plates pushed the Colorado Plateau from near sea level to more than 10,000 feet high.
About 6 million years ago, water flowing over the plateau carrying sand, gravel and rocks began grinding down through the stony layers, and the erosion continues today. While from the rim, the relentlessly scouring Colorado River may appear a slim thread, it actually averages about 300 feet wide and 100 feet deep.
Despite the many millennia of grinding, which wears away a paper-thin slice annually, the bottom of the canyon below the South Rim is still 2,450 feet above sea level. At 277 miles long and 1 mile deep, the Grand Canyon ranges in width from 8 to 16 miles, and spans a total of 1,904 square miles. It was established as a forest reserve in 1893, and made a national monument by President Theodore Roosevelt 15 years later. Then in 1919, three years after the National Park Service was formed, Congress declared it Grand Canyon National Park.

A highlight of our visit was the three-hour, 4-mile Abyss Overlook Mule Ride (offered daily, year-round). Two dozen or so riders gathered at noon at the Mule Barn (which assistant livery manager Steve Byrd says will be made into a museum after a new barn is built at Kaibab Trailhead). There we were given lengthy instructions and assigned our mules (mine was a sweet round molly named Jezebel, age 17).
Keeping the mules “nose-to-tail” as much as possible (for the animals’ safety, as a mountain lion might be lurking, Byrd had said), we walked and trotted along streambeds, through piney woods, and up and down hills to Abyss Overlook. There we took a 20-minute break to admire the canyon, draped in purple haze in mid-afternoon.
Another not-to-be-missed attraction here is “Grand Canyon: The Movie” at the IMAX Theater. The film (which claims to be the most-watched IMAX movie of all time) depicts the discovery and history of the Canyon — said by Theodore Roosevelt to be “one of the great sights every American should see” — and the adventure that’s possible here.
Despite the large number of mammals and birds that call the Grand Canyon home, we had seen only a few (several ordinary rock squirrels and an unusual Abert’s squirrel with outsized feathery ears, and one or two raptors we thought might be condors but couldn’t be sure). But on the last evening of our visit we were treated to a fine surprise.
Near sunset, as the Western sky blazed with purple clouds outlined in fuchsia, a magnificent bull elk sporting an eight-point rack sashayed down from the woods into the campground to nose among the picnic tables and munch grass. Minutes later another bull — this one a 10-pointer — arrived, soon to be joined by a third — none of them fazed by the multitude of campers who emerged from their RVs, cameras in hand. The beautiful beasts continued their moseying and dining until long after the sun was gone. We can’t imagine a more perfect finale for a visit to this incredible place.

An elk wanders into our campground at sunset.

Grand Canyon Camper Village and RV Campground, Highway 64 near the South Rim Park Entrance, Tusayan, Arizona, is open year-round. The campground has picnic tables, coin-operated laundry facilities, propane sales, and ice and firewood are available. RV sites have 20-, 30- and 50-amp hookups; no generator use is allowed on the property.
928-638-2887 | www.grandcanyoncampervillage.com