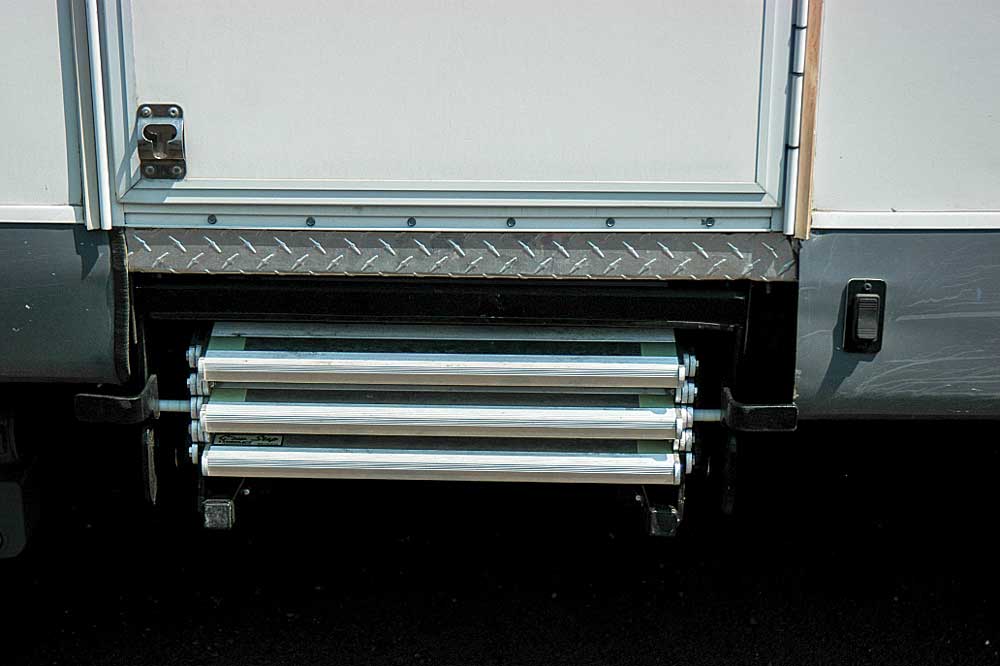 Torklift’s glow-in-the-dark step system, designed for improved trailer entry and egress, undergoes a refinement for even better function and stability

When it comes to gaining easy entry and exit into and out of an RV, stable steps, at the right height, are always welcome. Folding steps most commonly used on trailers and fifth-wheels can be challenging for people who need a wider platform for stability and, for some, the spacing between the rungs can be too tall for comfort. And these steps can also be difficult to deploy, depending on age and the amount of crud and rust that has built up on the mechanism over the years.

When Torklift International designed its GlowStep Revolution step system, it was earmarked for use on truck campers with steps below rear doors that traditionally have been difficult, and often awkward, to use. Torklift’s product was later modified to retrofit the stock folding steps used on trailers and fifth-wheels, offering increased stability and a big lift in convenience when it comes to opening the steps for use in campgrounds, even on undulating terrain. The latest GlowStep Revolution, which employs the same scissor-type mechanism and offers 7 inches of vertical adjustment, has undergone refinements that make it better and safer.

Step It UP: Torklift’s GlowStep Revolution can be installed in the
factory openings of most travel trailers and fifth-wheels. When retracted, the rungs fold nicely into the allocated space.

Although the new GlowStep Revolution may appear identical to the previous model, a number of differences improve its functionality. The step system is still constructed of aircraft-grade aluminum, aside from the stainless rivets and a selection of mounting hardware. It continues to provide several levels of adjustability and five positions for each leg of the company’s All Terrain Landing Gear. And, as the name implies, it still glows in the dark for enhanced visibility at night.

Improvements include revised landing gear that incorporates a new foot design and a far superior deployment guide and slide system. In upgrading the step system, Torklift utilized a larger nylon-encapsulated bushing for the pivots, which provides additional support and much smoother operation. The bushing/bearing surface is capable of taking a significant amount of tension without over-stiffening the mechanism. Designers of the GlowStep also incorporated a hole on either side of the mechanism to engage the supplied bail pin in a locked position, either folded or extended.

Installation of the GlowStep Revolution is straightforward, requiring a simple replacement of the existing standard-issue RV step and its four associated bolts and nuts. To make the process easier, the steps should be removed from the frame before installing on the trailer, which will lessen the assembly weight. After the frame is secured to the trailer chassis, the steps are easily reattached. At this point, the step system is completely ready for use anywhere, including the aforementioned uneven terrain.

Rated for 375 pounds, the GlowStep Revolution system is available in two- to six-rung configurations and designed to fit standard industry openings below the entry door. Fitment assistance is offered on the company’s website. Prices for the various U.S.-made step systems range from $535 to $650, and the product is protected by a lifetime warranty.
Beyond ease of use, the GlowStep’s scissor action makes it possible to forgo a booster step to reduce the distance from the ground to the first rung, which many times can be too high due to ground terrain; the entry-door step riser height is 7½ inches. SureGrip step tread provides a solid, nonslip surface, and a SafeStep pet barrier can be added to protect paws from getting caught in the openings. A GlowGuide handrail can also be installed for additional stability. Owners will certainly enjoy the solid feel without compromising balance from diving-step syndrome, narrow rungs and uncomfortable heights commonly experienced with factory counterparts.