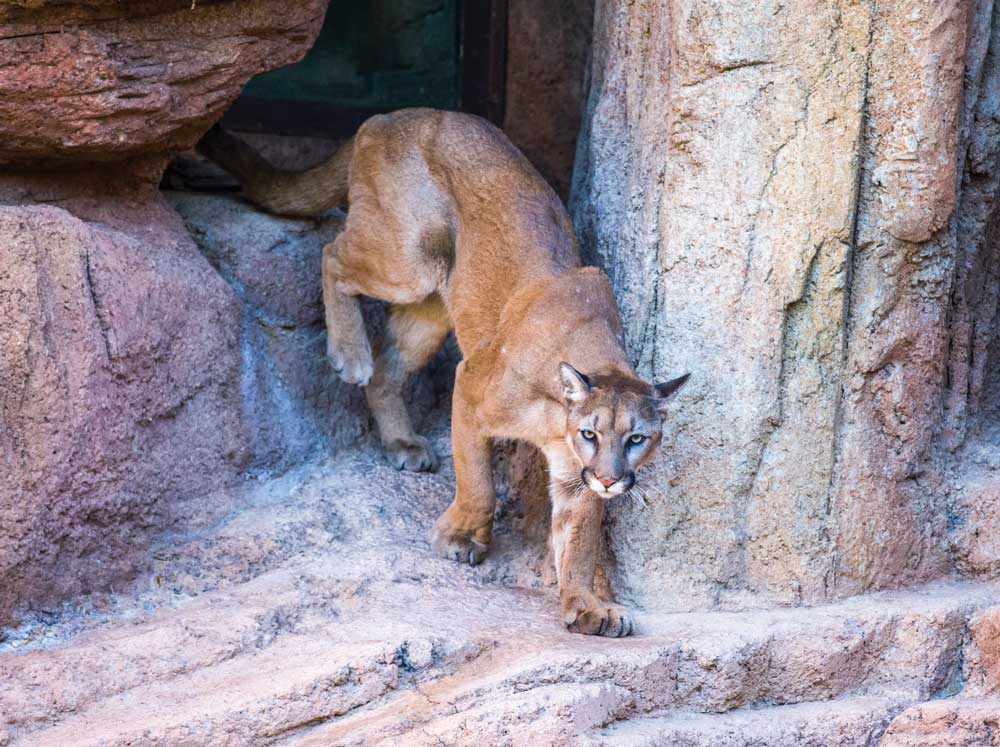 During our many winters in the Arizona desert, we have discovered that not only can we mingle with lots of fellow RV snowbirds, but there are all kinds of other birds and wildlife to spend time with as well. We are animal lovers, and we’ve found some priceless spots to wander into the desert or tiptoe down to the water’s edge to view water birds, bobcats, raptors, and even wild horses and parrots.

To enjoy a little wildlife around the rig, we like to hang out a hummingbird feeder. A simple mixture of one part ordinary table sugar and four parts water attracts them within a few hours. We use a window-mounted feeder that attaches to the RV window with suction cups. This makes it easy to watch their antics through the glass from inside the cozy warmth of the RV. In desert settings, we find that a very shallow dish of water placed on the ground a short distance from the rig also attracts all kinds of birds and furry friends, from Gambel’s quail to roadrunners to cardinals and chipmunks.

One of the easiest places for viewing Arizona’s native animals is at the Arizona-Sonora Desert Museum in Tucson. Although these animals aren’t living in the wild, their beautiful indoor and outdoor habitats and walk-in aviaries have been meticulously designed to resemble natural settings, and all of Arizona’s animals – from mountain lions to coyotes and big horn sheep – can be spotted between the rocks and underbrush.

Twice a day, all winter long, this museum hosts a Raptor Free Flight show where raptors, owls and ravens fly by at close range while trainers hold out treats for them. We were thrilled to stand with a small crowd of visitors and watch a ranger release several birds to get their exercise and then return for a tasty morsel. A great horned owl flew silently just overhead, almost touching our upturned faces with its wingtips, and then grabbed a snack from the ranger’s outstretched hand and took it to a nearby tree branch to savor at leisure.
We arrived at the Arizona-Sonora Desert Museum just as it opened in the morning. This was an optimal time to go because all the animals were out and about eating breakfast, so they were visible in their enclosures. An hour later, once they had eaten their fill, many of them vanished because they laid down for a nap behind a tree or a rock and were impossible to see.

To see some of these critters in the wild, we took a drive along the stunningly beautiful Bush Highway that runs beside the Salt River between Fountain Hills and Mesa on the east side of Phoenix. There are many overlooks and National Forest day-use areas along the Bush Highway, and simply parking at any of them and walking down to the river can yield an exciting animal encounter. 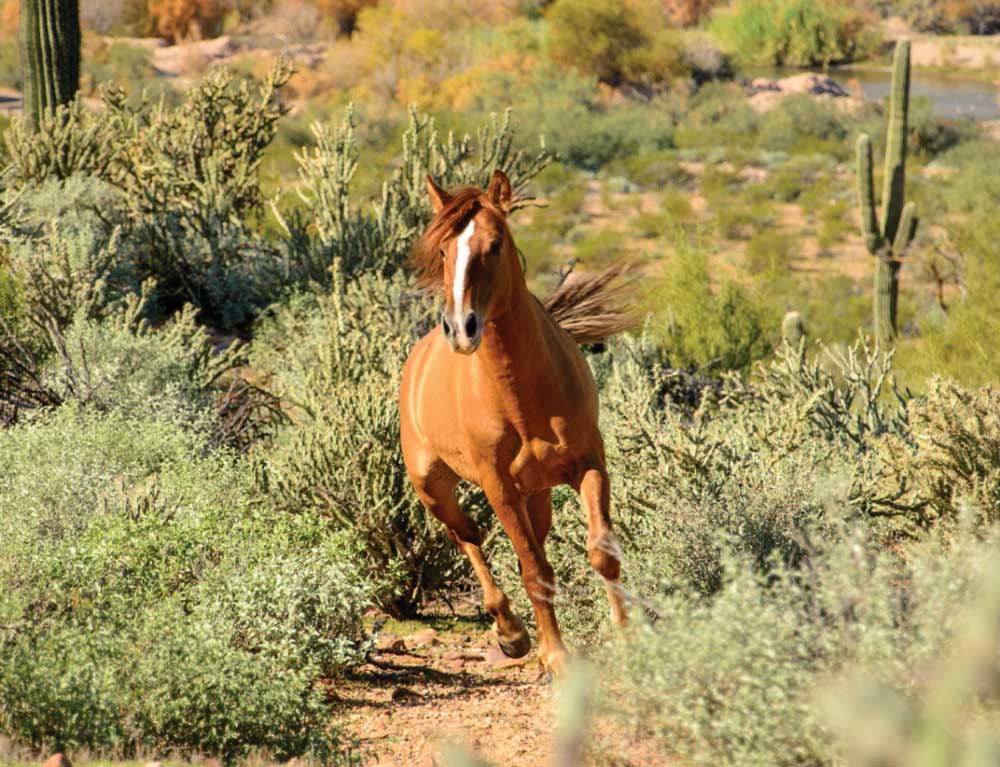 A wild horse gallops near Bush Highway east of Phoenix.

At the Blue Point Day Use Area we hiked alongside the river and watched a great blue heron fishing. A little farther down the trail a friend of ours came face to face with a herd of bighorn sheep. Coon Bluff Recreation Area (seasonal overnight camping) is favored by cormorants as they stand on rocks in the river for hours with their wings outstretched to dry off after they’ve been fishing in the water. Flocks of coots and ducks float about on the water’s surface like little boats, leaving a small wake behind.

As we were busy watching these water birds at Coon Bluff, we heard the thunder of hooves behind us and looked up to see a herd of wild horses running past. What a thrill! This herd has been hanging around the Salt River for decades, and one rumor is that they are descended from the Native American’s mustangs of long ago.

Around the corner at the Phon D Sutton Recreation Area (day-use only), I had the most extraordinary encounter with these unusual horses when I came across a small group of them grazing by the water’s edge. A beautiful, leggy brown colt was with its white mother, nuzzling her and occasionally lying down in the grass near her to rest. I watched these horses interacting with each other at close range for nearly an hour.

The Phon D Sutton Recreation Area is at the confluence of the Salt River and the Verde River, two of Arizona’s major rivers, and we have watched bald eagles soaring overhead and we’ve seen snowy egrets and great egrets dancing together in the water while snatching fish from the depths with their long beaks. Very early one morning, before the sun was up, we spotted a bobcat among the rocks when it came down to the river for a drink.

Like the Salt River wild horses (which are probably more feral than wild), there is a resident flock of wild parrots in the Phoenix area that most likely originated with a few pet birds that flew the coop. These gorgeous little pink-and-green parrots are peach-faced lovebirds whose native home is in Africa. They like it hot and dry, so Phoenix is an ideal home for them, and they’ve discovered that the nesting holes pecked out of the stately saguaro cactus by flickers, native Sonoran Desert woodpeckers, can make a wonderful parrot home too.

Spotting a peach-faced lovebird peeking out of a saguaro cactus is a sheer delight, and there are a few places they like to congregate. One area is the neighborhood in Scottsdale between Tatum and Scottsdale roads and between Cactus and Thunderbird roads. Another is in the trees outside of Albertsons supermarket on North Power Road in Mesa.

Huge flocks of sandhill cranes take up residence near Willcox, Arizona, and are easily seen at Whitewater Draw, especially at dawn or dusk.

These little guys are very spirited and noisy, and they like the birdseed that residents put out in feeders. We find them by listening for their high-pitched squeals and looking for the flashes of their bright-green feathers as they fly from palm tree to cactus in the neighborhoods.

A native wild bird that residents have helped out a bit and made very easy to watch is the burrowing owl. Despite being fine flyers, these guys like to live in holes in the ground close to their rodent prey. In the city of Gilbert, southeast of Phoenix, owl lovers have installed burrowing owl-sized pipes at Zanjero Park next to the farm fields where the birds like to dine. These happy owls hunt mice in farmers’ fields by night and lounge around at their human-supplied burrows by day. What a life!

Unlike other animals, there’s no need to set an alarm clock to get a close-up view of the burrowing owls. We took a leisurely stroll down the paved park path near noon and met a pair of owls at the entrance of almost every burrow in the park. We had to laugh as we saw one pair after another standing outside their homes because they looked like little old couples sitting on their front stoops in the city, watching the world go by.

Another fabulous area in Gilbert for wildlife watching is the Riparian Preserve at Water Ranch. This is a series of very large effluent ponds where wastewater goes through a natural filtration process as it passes through the dense soil. Animals and birds love these ponds, so the town has built a series of walking trails all through the area, along with viewing stations. These viewing stations are chest-high walls you can hide behind and peer over to watch the animals without them knowing you are there.

Photographers, joggers and nature lovers flock to this little watery oasis of nature in the middle of the desert suburbs. Early morning is best for viewing the animals, as that is the time they are most active. I was floored to stand right below a Harris’s hawk as it scanned the scene from a tree branch high above me. It didn’t seem too concerned about my presence and simply stared down at me as I approached. 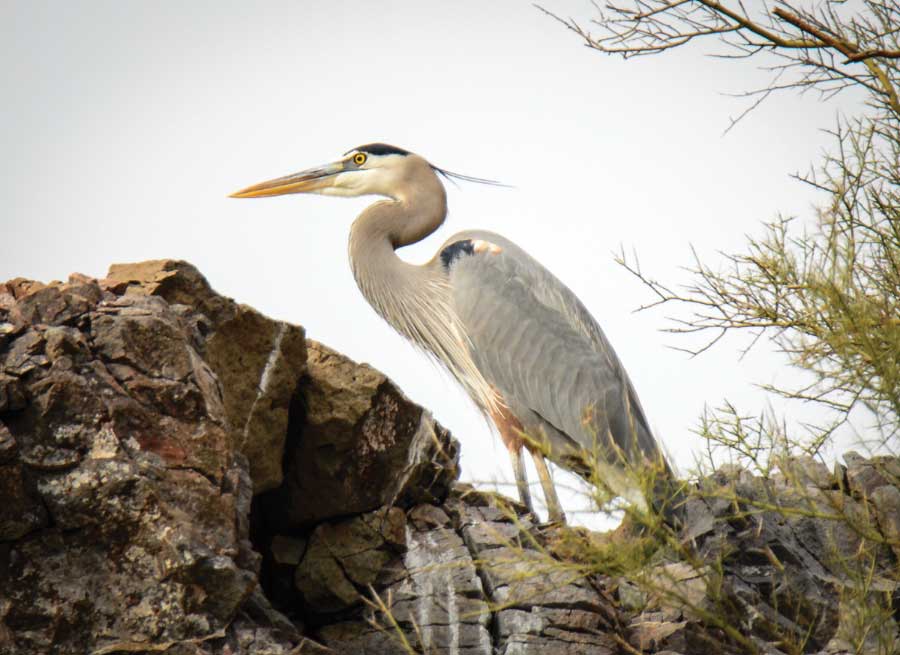 A great-blue heron waits patiently for its catch of the day at Blue Point Day Use Area in Tonto National Forest, 20 miles northeast of Mesa.

Out in the ponds we saw a showdown between several snowy egrets and great egrets as they sorted out their pecking order and decided who could stand where to do their morning fishing. Meanwhile several great-blue herons quietly stole one big fish after another out of the water.

Another form of wildlife watching at Water Ranch is the photographers. This rare breed of human arrives in the predawn hours fully equipped to capture the most extraordinary wildlife photos, complete with huge telephoto lenses, substantial tripods, backpacks and vests filled with lenses and filters. With furrowed brows, their eagle eyes peer into the trees and across the water seeking out unusual species to photograph. They themselves are a curious sight to be seen.

Coyotes can be found all over Arizona, and we have even spotted them in the streets on the desert fringes of the urban world of Scottsdale. Beautiful and remote Roosevelt Lake, about an hour east of Phoenix, is home to several herds of coyotes, and while staying out there, we laid awake in bed wide eyed as we listened to their haunting cries. On one early morning walk at the Windy Hill Recreation Area at the lake, we spotted a coyote just a few feet from us as it crossed the road ahead.

Southeast of Tucson, a special gathering of sandhill cranes takes place every winter near Willcox – the Wings Over Willcox Festival (January 11-18, 2018). These enormous and raucous birds take over the lake at Whitewater Draw by the thousands. We were blown away by the cacophony of noise these birds make as they call to each other over huge distances in the air and chat among themselves while standing near the water.

Dawn and dusk are when they are most rowdy. Before the sun rises each morning, they take to the sky in huge groups, and the flurry of flapping wings and splashing feet is a thrill to see. Up in the sky, they fly in ragtag formations, either stringing out in a line or forming a “V” or “Y” shape of some kind. Flock after flock flies by as they commute from their overnight resting area by the lake out into the farm fields where they forage all day.

After sunset, when the sky is a vivid orange, they commute back home to their roosting area on the water’s edge. As each flock flies into view, a shout of welcome goes up from the birds that are already home as they exuberantly greet the incoming group with a riotous commotion. Wings flap wildly and feet flail on the water as the arriving birds find their landing spots. The din can be heard far and wide as each bird takes a place near its friends to stand on one foot and tuck its head under its wing for the night.

For those of us who are snowbirds of the RVing variety, all of these encounters with Arizona’s special wildlife are enchanting. If you are an animal lover and Arizona is on your horizon for winter, check out a few of these remarkable spots and enjoy the squawks, squeaks and scampering feet of Arizona’s wild winter residents. 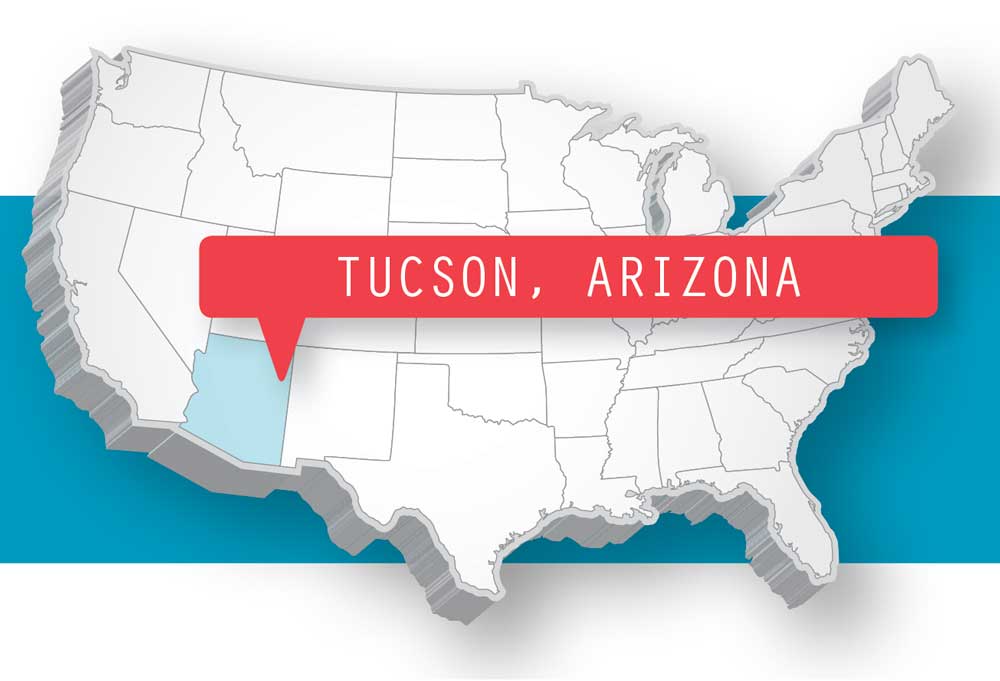 The Wild Side
One of the easiest places for viewing Arizona’s native animals is the Arizona-Sonora Desert Museum in Tucson. Follow Arizona Interstate 19 to the Ajo exit westbound. Follow Ajo Way until you reach Kinney Road (about 8 miles) and turn right. Follow Kinney Road for 7.5 miles and the Desert Museum will be on your left.