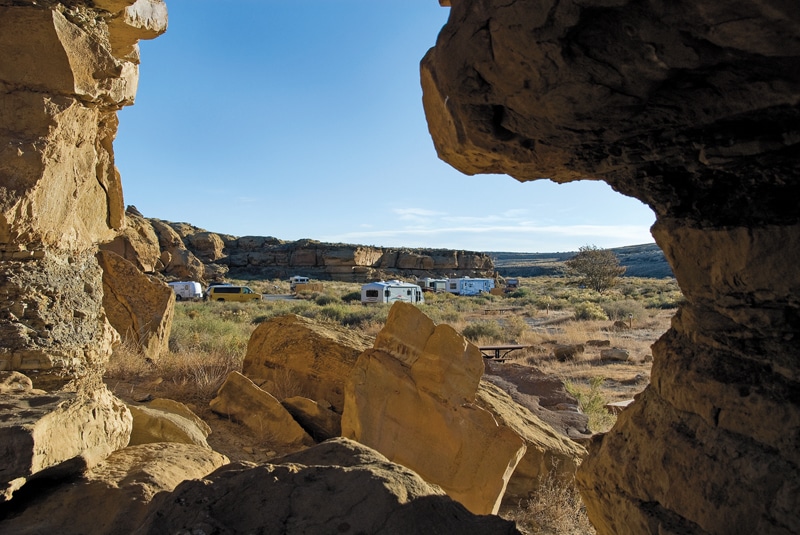 Spring was perfect with mild days and clear nights just right for exploring and stargazing. We hiked through the abundant ruins during the day, marveling at the Chacoans’ architectural skills. At night, we stared up at the Milky Way and countless stars, knowing we were gazing at the same sky they did centuries ago.

Chaco Culture National Historical Park is located in remote northwestern New Mexico, about 70 miles southeast of Farmington. After finding our way to the small town of Nageezi, we traveled 8 miles on CR 7900, then continued 13 more miles on CR 7950, a rough dirt road normally suitable for all passenger vehicles. Visitors will find a campground and visitor center at the park, as well as self-guided trails. But don’t expect to find food, firewood, lodging or fuel. You’ll need to bring your own supplies and accommodations.

Camping is by far the best way to enjoy this park. You’ll see the brilliant colors of the stones at sunrise, and after sunset you can enjoy the lack of light pollution and see the stars in all their glory. In addition, there are special talks by park researchers and many other activities in the park.

Nestled in a rocky cove, the 30-site Gallo Campground is just one mile from the visitor center. It has no hookups, but it does offer lots of peace and quiet, dark skies, and millions of stars.

The Gallo Campground is located one mile east of the visitor center, where there are 30 sites available on a first-come, first-served basis. There’s a group camping area as well. A campground host provides assistance from April through October. There are no hookups, but a dump station is on site for waste disposal.

Chaco Canyon was the center of a vast civilization from about AD 850 to AD 1250. It encompassed what is known today as the Four Corners states — New Mexico, Colorado, Arizona and Utah. Explore Chaco Canyon and you’ll find the remains of great houses, characteristic buildings of the Chacoans. The great houses consisted of large structures containing many rooms, kivas (round ceremonial rooms) and plazas. Researchers believe these great houses were more like centers of pilgrimage or ceremony instead of permanent dwellings. 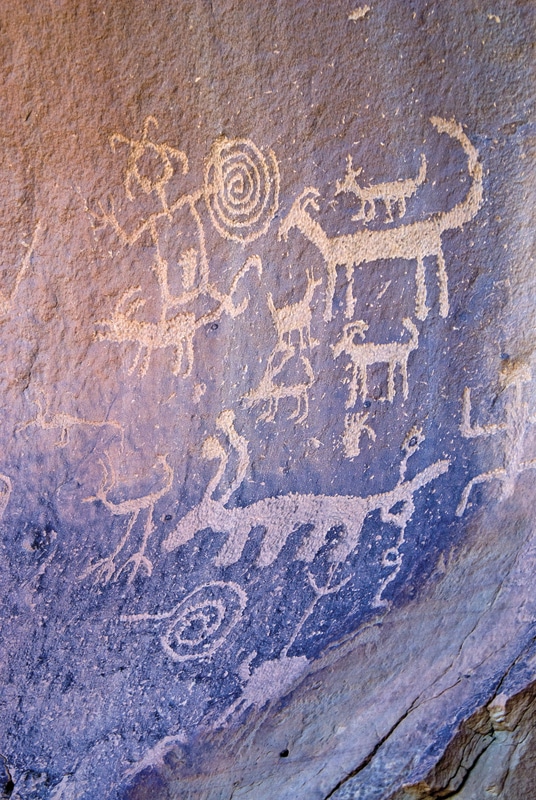 Among the many mysteries left behind by the ancient Chacoan people are the petroglyphs and pictographs they created on the walls of buildings and the landscape in their world.

It’s best to begin at the visitor center where there are two films and the museum displays to view. Next, you’ll want to get out and walk. Una Vida can be reached from the parking area and is one of the original great houses of the canyon. Here, you’ll see an unexcavated great house just like early explorers saw when the houses were discovered in 1849. In addition to the dramatic ruins, visitors can also see a remarkable rock art panel filled with petroglyphs (carvings).

Pueblo Bonito is the largest and best-known great house in Chaco Canyon.

Along the nine-mile loop drive, which is paved, there are many sites to see. At Hungo Pavi there is an unexcavated multi-story great house site as well as a wonderful hand-pecked stairway. Pueblo Bonito – the largest and most excavated of the Chacoan sites – is a must-see if you have limited time in the park. From the parking area for Pueblo Bonito visitors can also walk to Chetro Ketl. And if you have time, be sure to walk the Petroglyph Trail between the two sites.

Farther along the drive, see Pueblo del Arroyo, a terrific great house showcasing some of the newest archeological preservation in the canyon. Casa Rinconada is just beyond and offers the largest great kiva in the Chacoan world.

If you prefer to visit the ruins with a guide, be sure to attend one of the twice-daily guided tours of Pueblo Bonito. Offered at 10 a.m. and 2 p.m. from April through October, participants meet at the parking area for Pueblo Bonito. Also offered during the same months is the Night Sky program. The Chaco Observatory provides visitors with an intimate look at the night sky. During the day, visitors can view spectacular night sky images that were made at the Chaco Observatory.

While we were in the preserve we hiked all of its trails, including the backcountry trails, such as one that leads to the Supernova Pictograph, a drawing that may represent an exploding star seen worldwide in AD 1054.

The mysterious petroglyphs in Penasco Blanco are thought to show a massive supernova from the year 1054.

While researchers do not know the true meaning behind Chacoan rock art, comprised of pictures either carved or painted on rock, they do believe the Chacoans had sophisticated wisdom regarding the sun and the moon. For instance, on top of Fajada Butte, the sun’s position is marked on a spiral petroglyph during four important events — the summer solstice, winter solstice and both equinoxes.

Pueblo del Arroyo is the only tri-walled structure at the Chaco Culture National Historical Park.

Elevations in the park range from 6,040 feet to 6,860 feet and its 34,000 acres consist of four habitats: pinyon-juniper woodland, mesa top grasslands, canyon floor and riparian. While exploring the ruins and rock art, be sure to keep an eye out for animal life. A total of 128 bird species have been identified in the park. Elk are quite common, but also look for the usual coyotes, mule deer, cottontails, as well as a number of bat species. There are reptiles such as a variety of lizards and snakes, including prairie rattlesnakes, which are more common in the backcountry. Gopher and bull snakes can be seen around the ruins.

If you travel to Chaco through Aztec be sure to make a stop at Aztec Ruins National Monument, which is open 8 a.m. to 5 p.m. most of the year and 8 a.m. to 6 p.m. Memorial Day through Labor Day. The park is closed Thanksgiving, Christmas and New Year’s Day.

Around AD 1100, the ancestral Pueblo people began an ambitious project that would take almost three decades to build. The great house at Aztec West stood three stories high, was longer than a football field and once boasted as many as 500 masonry rooms, including a ceremonial great kiva more than 40 feet in diameter. Take a walk through the ruins of Aztec West and be amazed, then descend into the great kiva, a reconstructed marvel that is the oldest and largest building of its kind. For more information call 505-334-6174 or visit www.nps.gov/azru.

For more information on Chaco visit www.nps.gov/chcu or call 505-786-7014. The weather in Chaco is as varied as the ruins themselves. Summers are usually not as hot as other desert environments, but expect highs in the 90s. In July the monsoons begin so expect heavy precipitation in short intervals, with slick, muddy roads a probability. Spring and fall are the best seasons for visits thanks to the moderate temperatures.