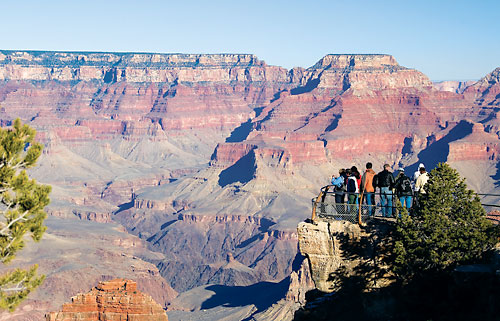 The Grand Canyon is an awesome place come any season of the year. The majesty of the canyon, the depth, the awesome beauty, the see-forever views, they are there no matter what time of year. But visit in winter, like my husband Mike and I did recently, and you’ll feel as though you are experiencing something brand new.

We’ve been to the Grand Canyon on many occasions, but only in winter did we see a herd of elk foraging on the rim, the canyon providing a delightful backdrop. In summer, visitors may see California condors soaring in the heavens or perched on a park railing, something you probably won’t see in winter when the birds are deeper in the canyon or hanging out at the Vermillion Cliffs.

Winter is a time of peace and quiet in the park. We visited over New Year’s and learned that the park draws a large amount of visitors on winter holidays but not during the rest of the season. Despite the holiday visitors, the park remained uncrowded except for one of the more popular viewpoints at Mather Point – and even there we never saw the masses you would find in the summer months.

Visit the mighty chasm in winter and you’ll stand, most likely bundled up in layers of fleece and a windproof jacket, as you gaze in awe at one of Earth’s most powerful, inspiring landscapes. You can easily see across the canyon and glimpse the North Rim, only 10 miles away as the raven flies, but 215 miles by road. (The road to the North Rim is closed in winter.) If you want a closer view, however, look down upon Plateau Point and other points of interest within the canyon, or you can hike down for an even better look. But if you hike, be prepared for icy trails.

We strapped on crampons when we descended part way into the canyon. We also used hiking poles to better maintain our balance. In addition, our packs carried the extra clothes we weren’t wearing (we were wearing almost all of our layers as it was cold and windy), as well as food for energy and water to remain hydrated. The weather can change quickly in winter, so visitors must be prepared. What starts out as a bright sunny day can quickly turn into a bone-chilling snowstorm, so make sure you check the weather forecast before setting out.

If you aren’t into winter hiking, you can always just bundle up and sit some place in the sun – but out of the wind – to watch the play of light and shadows as they dance over the canyon. Sometimes you just have to sit and stare in wonder as the canyon can simply be overwhelming. The South Rim has elevations from 6,700-7,400 feet. It is 277 river-miles long, up to 18 miles wide, and a mile deep. It’s old and always changing. The canyon is comprised of geologic layers, the oldest of which are the Vishnu Basement Rocks, which are up to 1,840 million years old. The Vishnu Basement Rocks are found deepest in the canyon. As you gain elevation the layers are called the Grand Canyon Supergroup, Tapeats Sandstone, Bright Angel Shale, Muav Limestone, Temple Butte Formation, Redwall Limestone, Supai Group, Hermit Shale, Coconino Sandstone, Toroweap Formation, and the top layer is the Kaibab Formation.

The layers are evident from both the rim and below in the canyon and any place in between. Stand on the rim in winter and you’ll see more than just layers. You’ll no doubt see ravens soaring on high. In addition, no matter how cold or windy be sure to witness at least one sunrise and/or sunset from the rim.

There are also views of the canyon from indoors, a nice place to be when the weather is downright cold! Kolb Studio is one such place. Restored now, it was once the home and business of the Kolb brothers, men who were pioneering photographers at the canyon. The studio, located in the Village Historic District, at the Bright Angel Trailhead, is open daily and offers a free art exhibit and bookstore.

The Yavapai Observation Station is another great place from which to view the canyon. Exhibits at the station offer insight into the geology of the canyon. How old is the canyon? How did it form? Find the answers to these and other questions there. And if you have more questions, you’ll find a bookstore with a variety of materials about the area.

When I visit a place, I like to think of those who were there before me. What was it like for the first people who discovered the canyon? Were they as in awe as I?

People have had ties with the Grand Canyon for thousands of years. Clovis hunters lived in what was a wetter region, with large mammals that are now extinct. Later on, Ancestral Puebloans grew crops in the canyon and lived off the land.

In the more recent past, Hopi Indians led Spanish explorers to the South Rim in 1540. More than three centuries later, in 1869, John Wesley Powell led an expedition through the canyon. The railroad arrived at the South Rim in 1901, and in 1908, President Theodore Roosevelt proclaimed this awesome place Grand Canyon National Monument. Congress deemed National Park status in 1919. Today, visitors from around the globe come to sightsee, hike and enjoy this magnificent place.

Visitors also experience the different habitats and animals that live in Grand Canyon National Park. At a mile deep, the difference in elevation means a number of communities of life exist in the park. Water is the lifeblood of the Grand Canyon. The riparian areas are home to beaver and humpback chub, although they are rare. In the low elevations of the park, three of the four North American deserts come together. Look and you will see mesquite trees from the Sonoran Desert, blackbrush from the Great Basin Desert, and Joshua Trees from the Mojave Desert.

Higher up a forest of pinyon pine and juniper covers much of the mid-elevation and provides homes for pinyon jays and mountain lions. Ponderosa pine forests harbor two closely related tassel-eared squirrels that depend on the ponderosa for food and shelter. Visitors can see the Abert squirrel on the South Rim, and the Kaibab squirrel on the North Rim.

The North Rim is at least 1,000 feet higher than the South Rim so it harbors one more ecosystem, the Montane Forest. More precipitation means a diverse forest of fir, spruce and Douglas fir, along with aspen trees.

Once nice thing about the Grand Canyon is that it is easy to get around. Park your rig at the campground or Trailer Village, and you can put your keys in your pocket or purse and leave the driving to the National Park Service’s contractor, Paul Revere Transportation.

For more than 30 years the South Rim has been served by a free shuttle bus system. The shuttles will make your visit more enjoyable, as well as reducing pollution and decreasing traffic congestion. Shuttles run every 15 to 30 minutes. You don’t need a ticket, just get on and off at any stop. The routes are set up so you can ride to a stop, enjoy the view, hike, shop at a gift store, grab some information, or walk along the rim. When you’re ready to go, just hop on another shuttle.

From December through February, the shuttle service is limited and you won’t find a shuttle along Hermit Road, which is 7 miles one way, but at other times of the year you must ride the free shuttle to access the road. The views along the drive are incredible, as you can view the Colorado River from various points, including Hopi, Mohave and Pima. If you don’t want to drive you can take a commercial bus. The concessionaire Fred Harvey offers all sorts of tours. Even in summer you won’t find a shuttle along Desert View Drive, which is 25 miles one way. Desert View Drive follows the rim from Grand Canyon Village to the East Entrance. Along the way you’ll see the river from different points, including Moran, Lipan and Desert View.

Explore the Grand Canyon in winter and you’ll find a magical world of snow and ice and extreme beauty. You will have to add extra layers during your exploration, but I think you’ll find it’s worth it.

If you plan to visit the South Rim in the winter months, consider staying at Mather Campground. Although hookups are not available and maximum vehicle length is 30 feet, the fee is only $18 per night ($9 per night for Golden Age or Golden Access passport holders). Or, stay at Trailer Village, which is located next to Mather Campground. Sites there start at $32 per night, and each site comes with hookups. You’ll find a bank and ATM on the South Rim, as well as a post office, kennel and community library.