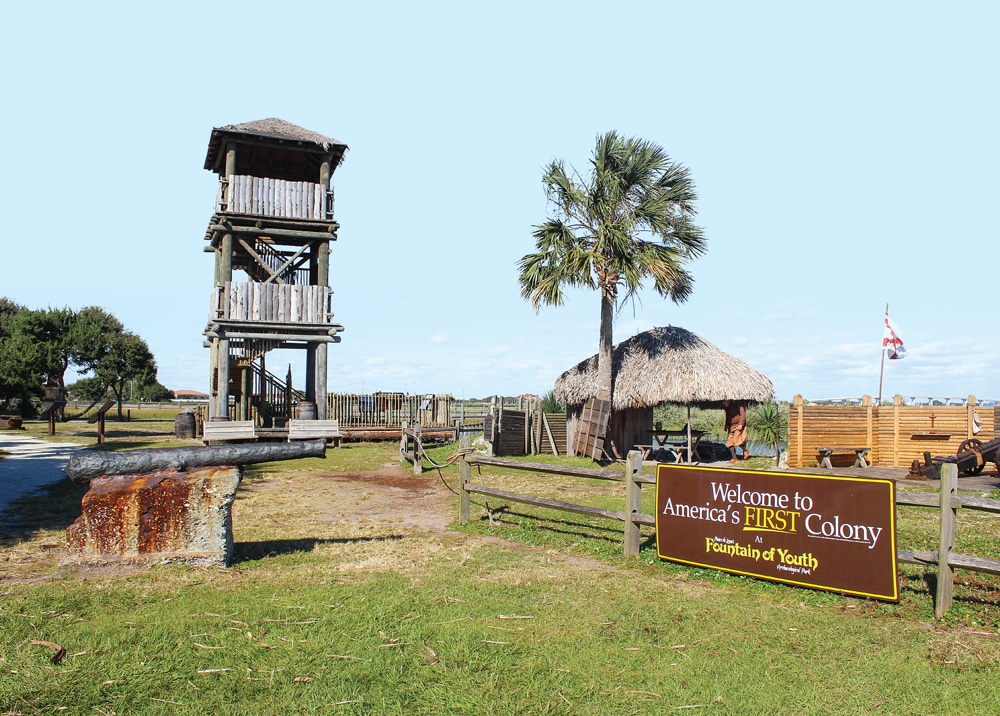 In addition to its long history, St. Augustine, Florida, is home to the nation’s first wax museum, a large collection of Tiffany glass and the famed Fountain of Youth

Proudly the oldest permanently occupied European settlement in America, St. Augustine, Florida, offers history, charm and the feel of Old Europe thanks to its Spanish heritage. While Florida was first claimed for Spain by Juan Ponce de Leon in 1513, the city of St. Augustine was established by Spanish explorer Pedro Menendez de Aviles in 1565. Last year the city celebrated its 450th anniversary.
Luanne Hickey, who grew up here, says many people aren’t aware of St. Augustine’s place in American history.

“When we were growing up and going to school and learning about U.S. history, most of the focus was on British history – Jamestown and Plymouth Rock. I know by meeting people from all over the world that many people don’t know about St. Augustine or about the rich Spanish history in our country.”

Over the years, St. Augustine has endured attacks on many fronts, but stood fast. You’ll see the Castillo de San Marcos, the only remaining 17th-century fort in the country, which sits in the middle of downtown. Now a national monument, this fort served many masters. Historians note that St. Augustine has flown under a number of different flags, including the Spanish, British and Confederate.
Hickey works at Ponce de Leon’s Fountain of Youth Archaeological Park, one of the area’s most popular attractions. She says there are many theories about the mythical fountain and Ponce de Leon’s connection. As she explains it, Ponce de Leon traveled with Christopher Columbus on his second voyage to America in 1493 and eventually became governor of Puerto Rico. While there, it’s believed that natives told him about an island where he would find gold and a magical rejuvenating spring. In 1513 he set off to find it, eventually arriving here. It was Ponce de Leon who gave the state its name, “La Florida” for land of flowers.
At the time, this land sat on a natural artesian spring that provided water to the Timucuan Indians. Today, you can still drink from the “Fountain of Youth.” The taste might surprise you. It’s a little bitter due to a long list of trace minerals like sulfur, carbonate, boron, chromium, phosphate, gold, sea salts and others.
It’s said to be very good for you, but does it actually have rejuvenating properties?

A view of Castillo de San Marcos National Monument from across the Matanzas River.

“If you believe,” says Hickey. She says she drinks it.
The park houses more than just the fountain and offers an interesting overview of the region’s history. You’ll see a replica of a Timucuan village. Excavations on site that began in the 1970s first uncovered artifacts from the Timucuan Indians, then the Spanish settlers who followed.
“When they (the excavators) started digging, they found Spanish artifacts and remains of buildings,” explains Hickey.” So we know this was where the (Menendez) settlement was actually located.”
Evidence of St. Augustine’s unique history is everywhere throughout the city, with different sections depicting different time periods. As you stroll along St. George Street and throughout other parts of the historic district, you’ll find many structures – each with a story all its own.

Getting Here
Located between Daytona Beach and Jacksonville, St. Augustine can be accessed from the north or south via Interstate 95, U.S. Highway 1 or A1A Scenic and Historic Coastal Byway. If visiting the St. Augustine Historic District, free parking for RVs is available on Riberia Street, between West Castillo Drive and Orange Street.

In 1887, oil and railroad magnate Henry Flagler built the luxurious Hotel Ponce de Leon as a resort for the rich. This amazing model of Spanish Renaissance architecture now houses Flagler College, but is open for tours.
Flagler also built the lavish Alcazar Hotel, which now serves as the Lightner Museum, named for another wealthy American who also left his mark on St. Augustine. Otto C. Lightner bought the hotel to house his unique collection of items from the Gilded Age, which has several floors of items including artwork, furniture and Tiffany glass.
The St. Augustine Lighthouse is a towering black-and-white structure built as a watchtower in the city’s early days, with additions added later. If you’re up for a climb, you can travel the 219 steps to the top for a stunning panoramic view of the city. A sign inside compares the climb to that of a 14-story building. Patrick Haney of Plant City, Florida, took the challenge.
“It was tiring, but I went to the top. From there, you can see all around the coast,” he says. “It was very windy today, so it was a little scary up there. I had to take my hat off or risk losing it.”
On this particular day, the winds topped 25 mph. You feel the true force of the wind when you’re up that high. It’s exhilarating, though, to make the climb, then look out over that magnificent view.
And while St. Augustine is rich with history, there are many other attractions.
“This city reminds me a little of Key West. I love the history, but I also like some of the other things that are offered,” notes Judy LaPrade. “I’m a golfer and I really enjoyed the World Golf Hall of Fame.” 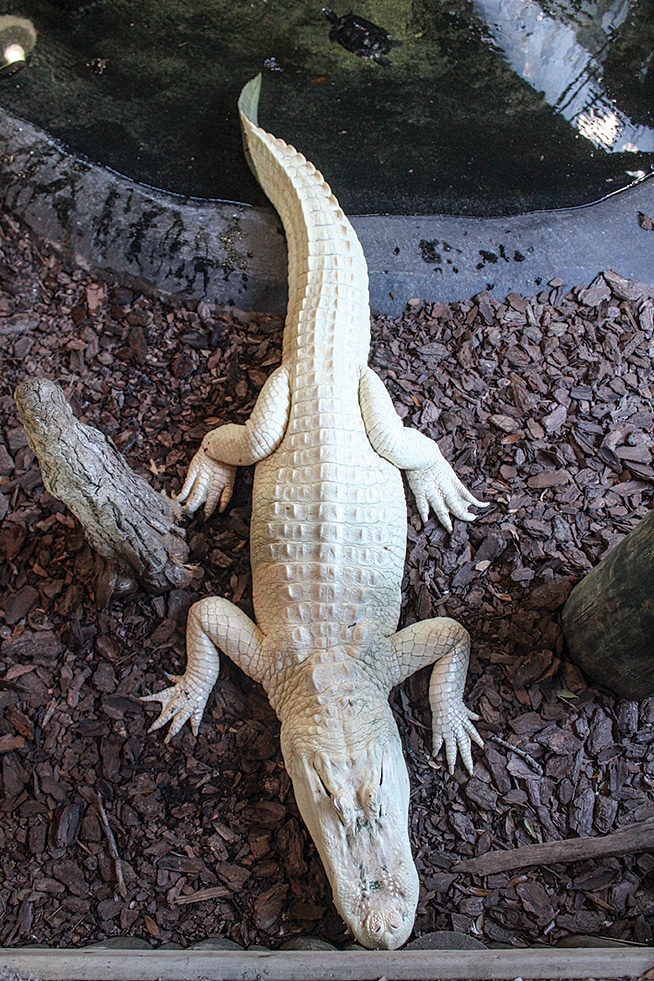 The World Golf Hall of Fame is located several miles north of the historic district, but if you have any interest in golf, it’s worth a visit. You’ll see the history of golf from its earliest days to the present. As you walk past numerous displays, you’ll get a close look at the different types of balls and clubs used over the years, the many different trophies golfers strive to win and learn the stories of the legendary players of the game.
Chris Sheehan grew up in Augusta, Georgia, home of the Masters Tournament, and has a deep appreciation of golf.
“Walking around the Hall of Fame was incredible. From the history of the game, to the greats who played it, and all the memorabilia, it was fascinating to see.”
Other interesting stops include the Alligator Farm Zoological Park with rare and exotic birds, animals and reptiles. Special attractions include two albino alligators. The city is also home to America’s first wax museum. It was created by George Potter in 1948, who brought his collection of wax figures from London, England. Potter’s Wax Museum is home to more than 150 wax figures, and while there are some newer famous faces, many you’ll remember for the important roles they’ve played throughout history. You’ll see Ponce de Leon, Wolfgang Amadeus Mozart, six Confederate generals, Albert Einstein, Adolf Hitler, Winston Churchill and many others. There’s also a collection of American presidents and their first ladies. And throughout the museum, you’ll note how realistic they all seem, due to their human hair, handmade uniforms and costumes, and most importantly, their eyes.
“The eyes are all prosthetic, meaning they’re the same eyes used in a human being if you lose your eye,” explains assistant manager Linda Manz. “What the artist does is color, shape and size them according to every character. So, if you go around the museum, those eyes have a tendency to follow you, especially if you use your imagination.”
Celebrity figures include Michael Jordan, the characters of “Star Wars,” Britney Spears, Johnny Depp from the “Pirates of the Caribbean,” and others. Have any of the celebrities ever seen their own figures?

“Yes,” says Manz. “Johnny Depp visits St. Augustine quite a bit. And he pops in and sees himself and others.”
And what does he think of his Captain Jack Sparrow figure?
“Oh, he loves it,” she says.
There are dozens of campgrounds and RV resorts in and around St. Augustine. Just north of town is the North Beach Camp Resort, located on the A1A Scenic and Historic Coastal Byway in Vilano Beach. The resort is situated among 30 heavily wooded acres on a barrier island between the saltwater North River and the Atlantic Ocean, and has 150 full-hookup sites, Wi-Fi, laundry facilities and a convenience store.
Full-time RVers Bill and Nancy Mills like to camp at Anastasia State Park.
“It’s a very nice park, though a little far from the beach. We like to do a lot of fishing so it’s a pretty good walk for us to go to the beach.”
Mills also noted that there are limited spots for large RVs, so you’ll need to plan ahead.
“The campground is beautiful and well-maintained. There’s plenty of room between sites and lots of vegetation. We have water and electric, which is nice. There’s no sewer, but we don’t really need it for a 10-day stay. We have large tanks, so for an RV park, it has all the things we want.”
Some of St. Augustine’s most alluring attractions are its beaches. Most are easily accessible to the public and offer plenty of parking. You’ll have no trouble finding a spot to enjoy the sun, the sand and the water.
If you visit St. Augustine, note the warm, easygoing, people-are-happy-here feel to it. Relax and enjoy all it has to offer. 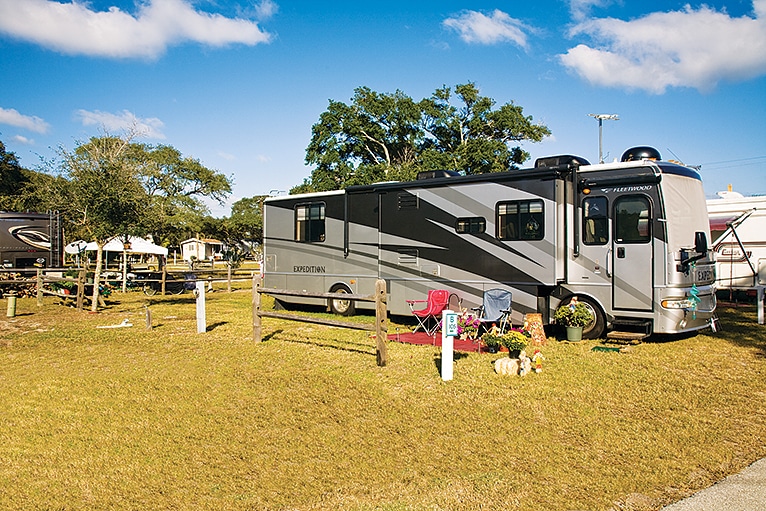