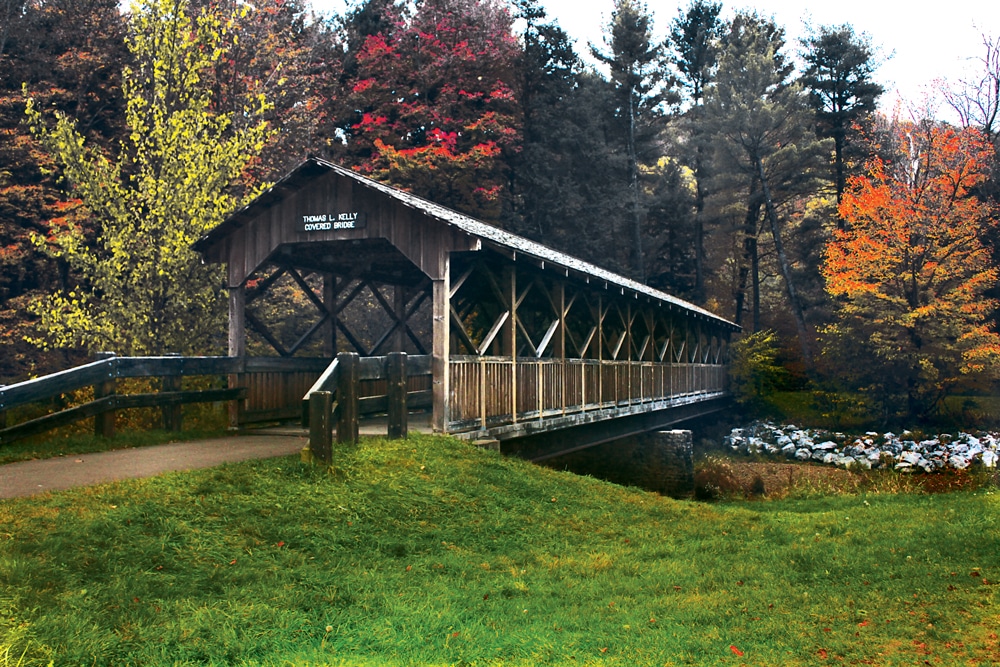 Nestled in the enchanting mountains of far western New York, Allegany State Park is a secret treasure for RVers. After a summer of continuous work, my husband and I arrived at Allegany anticipating a nice park with some hiking trails, tall trees and a pleasant, if fairly routine, state park camping experience. The reality was far beyond our greatest expectations.
The largest of all the state parks in the New York system, Allegany remains surprisingly quiet and secluded. Within its 65,000 acres of lush forest, we were immediately transported to a time past. The lakes and forests stirred visions of the Native American hunter stalking his prey or the settler forging a trail into the early west. We learned that the Seneca Iroquois people survived and thrived here for hundreds of years. Later, pioneer hunters moved to the area, including the historic deer hunter Philip Tome. Tome, famous for his work as interpreter for Cornplanter, Chief of the Seneca, was said to have captured numerous elk in the area and worked in tandem with wild wolves to hunt white-tailed deer. Eventually, homesteads and farming communities were developed, and by the 1870s, a 7,000-acre tract that is now part of the park was â€¨a privately owned hunting reserve.

In 1920 the effort to create a park was initiated in a joint undertaking of the Society for the Protection of Birds, Fish and Game, and the Buffalo Society of Natural Sciences. New York Senator Albert Fancher lent the project his full support and is now affectionately referred to as the “Father of Allegany State Park.” Allegany officially opened in the summer of 1921, and now this magical place provides recreation to thousands of visitors a year.
Miles of hiking trails and a world-class 5-mile biking route are favorite features, â€¨and an 18-mile section of the multi-state North Country Trail runs through the park. We especially enjoyed the short Three Sisters Trail as it wound up and around the hills and through a fantastic assortment of tree species, and the more challenging 6.5-mile Beehunter Trail with its mix of forest, creek and meadow terrain. Bring a sack lunch, as when the Beehunter ends at the picnic area, you’ll definitely be ready to eat.
Three campgrounds provide more than 300 sites within the park. A quick scouting trip of each campground revealed they were equally scenic, and even though they are rustic in nature, with back-in sites and gravel or dirt roads, their spaciousness and natural beauty was undeniable. Running low on provisions, we were grateful for the camp stores located in both the Red House and Quaker Run areas. If you require more â€¨substantial provisions, grocery stores, fuel stations, restaurants and even a casino are within minutes of the park boundary in the nearby towns of Salamanca, N.Y., and Bradford, Pa. Exploration of these history-rich towns would have to wait for our next visit as we couldn’t pull ourselves away from the beauty of Allegany.
Unique to Allegany are the nearly 400 vintage style cabins located in clusters on various trails and loops. These cabins would provide a great way for non-RVing friends and family to meet and have their own space. The cabins blend as naturally into the park setting as if they were sprung from the earth, and the gentle squeaking of their screen doors and smells of campfires create an atmosphere of times gone by. But the â€¨shimmering jewels of Allegany are its glossy clear lakes, Red House Lake, Quaker Lake and Science Lake, and they effectively divide the park into its two main areas. We explored both areas in our several-weeks-long stay and fell in love with each of them.

Campsites at Allegany are â€¨spacious and rich with natural beauty.

Red House Lake was created through dam construction in the 1930s. The lake is crowned on one side by the historic park administration building. Constructed in a traditional Tudor style and flanked by statuesque hemlocks and hardwoods, it is the grand dame of the park. The mansion sits on a hill looking over the Red House recreation area and houses park offices, a gift shop, small restaurant and natural interpretive museum. A number of picturesque picnic areas surround the lake, and a swimming beach, boat rentals, tennis courts, snack bar, mini-golf, volleyball and fishing make this an amazing recreation area. I joined in quite a few games of beach volleyball and was welcomed into the fold like an old friend.
Natural and scenic Quaker Lake was also created by dam construction and has a swimming beach with changing facilities, showers, a snack bar and playground area. Quaker Lake is particularly popular with anglers and paddle sport enthusiasts who want to get away from the hustle and bustle of busier Red House. We brought our two kayaks with us but noted there are also several types of boats for rent within the park at reasonable rates.
Quaker outdoor amphitheater is where families gather to watch movies under a canopy of stars. Sitting on a gently sloping hillside, a father and his two young sons shared a bowl of popcorn as the screen below them came to life with the flickering of an old black and white movie. A couple snuggled on a plaid blanket with a carafe of coffee. Down front on wooden benches a group of women chattered and laughed heartily as the moon passed silently overhead. Here, looking at other visitors, it became clear that this park is more than just a place to spend the night or take a hike. It is a community of those wanting to slow the pace of life, to reconnect, to be in agreement with nature, if only for a few days.
History buffs visiting Allegany won’t be disappointed. The Old Quaker Store Museum provides fascinating history lessons on the establishment of the park, those who lived and worked the land prior to its establishment, and a historical look at camping equipment of the past. The park itself possesses a fascinating history since its formation.
A science camp and a natural history school were the first formal activities to begin in the park in 1921 near Science Lake. During the Depression, park dance halls hosted weekend revelers and kept them dancing the nights away right up to the rock ’n’ roll 1970s. The work of the 1930s Civilian Conservation Corps added significant infrastructure, and the now-removed Fancher pool was the heart of activity for children’s camps of the 1940s and ’50s. Even a 1990 tornado that cut a swath through one section has left its mark on the pages of park history. To me, the most moving parts of the park’s history were the stories of those who gave up their homes and farms for the creation of the park.

Allegany’s clear, glossy lakes are among the park’s many attractions.

If it’s the sciences that pique your interest, be sure to visit Thunder Rocks geologic formation. Geologists speculate that these quartz conglomerate behemoths perched on the slopes of wooded hills were actually the floor of an ancient sea. Wildlife enthusiasts will enjoy seeing the many deer, black bear, beaver, bobcats, coyote, owls, turtles and other critters that are found in abundant numbers throughout the park.
We enjoyed the quiet wanderings of deer in and out of our campsite, watched industrious beavers working on their elaborate home building, and saw bears along the park’s many roadways. In fact, the resident black bears have made it necessary to establish Allegany as a “pack it in, pack it out” facility where all trash is taken to central recycling areas. Bears that become habituated to garbage as a food source are likely to require relocation or more drastic intervention. It is up to all campers to help protect these wonderful creatures from being disrupted by securing food in our campsites. In other words, don’t feed the bears. It is fun, however, to learn about the bears, and park naturalists lead tours and conduct programs on everything from bears to beaver colonies and waterfalls to night owls.

Bikers pedal past the covered bridge.

Birds are abundant here and the park is a vital breeding area for the threatened cerulean warbler. A bird blind viewing station is a unique way to get close to these feathered wonders. Also, be sure to visit the natural science museum, located within the administration building, which houses a wonderful educational display of the parks flora and fauna. Each time I encountered a bird or insect I didn’t recognize, I simply wandered into the museum and found everything I wanted to know.
Our visit coincided with the tail end of the busy summer season and the beginning of the park’s quieter fall days. The peak season runs June through August and provides a nostalgic feel of being back at summer camp, with activities centered on swimming beaches and boat docks. Lake waters, cool and clear, sparkled and danced as families gathered with picnic coolers near the volleyball courts. Canoes and loons alike glided silently across the blue expanses like moving picture postcards of summer vacations. Fishermen would cast and reel in rhythmic progression from the grassy banks. As summer lulled into autumn, the fall leaves became nothing short of spectacular. Sugar maples shed their green coats and put on vibrant displays of colors that bounced and reflected off of the lakes and filtered glistening sunlight onto the roads and trails.
The campgrounds close at the end of November, just as the area settles in for its long winter’s nap under blankets of annual snowfall. For those who love to commune with nature in the colder months, stunning cross country ski trails and miles of groomed snowmobile trails wind through unspoiled terrain. Campgrounds are closed at that time and winterized cabins provide shelter and warmth for hardy four-season travelers.
So grab your fishing pole, your bicycle and your curiosity, and plan a trip to magical Allegany State Park, with its mesmerizing mix of history, nature and memories in the making.