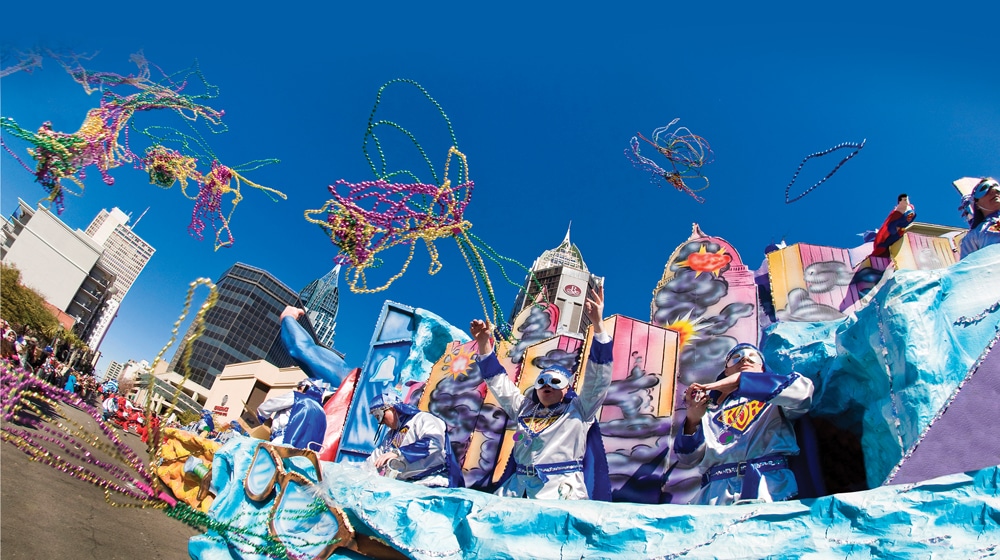 Six flags have flown over Mobile, Alabama, including those from Spain, France, Great Britain, the United States, the Alabama Republic (when it seceded from the Union in 1861) and, during the Civil War, the Confederate flag. Numerous attractions detail the events that have shaped the landscape and personality of this city. History enthusiasts will need to park their RVs for a good length of time to soak it all in.

Catch commemorative coins, trinkets and Moon Pies at the oldest Carnival celebration in the United States.

And, Mobile knows how to hold a party! With origins dating back to 1702, the city hosts the oldest Carnival celebration in the United States. For 2014, the parade season — which is a series of large street parties — starts on February 14, and concludes with Mardi Gras Day on March 4.
Mobile is excited about its newest venue: the GulfQuest National Maritime Museum of the Gulf of Mexico. Scheduled to open in 2014, it will showcase Gulf of Mexico animal and plant life, shipwrecks, maritime commerce, offshore oil platforms and everything else significant to the Gulf.

Finally, take advantage of miles of winding creeks and rivers by paddling a canoe or wetting a fishing line. The diverse Mobile-Tensaw River Delta supports 126 species of fish, 300 kinds of birds and more than 500 types of plants. Numerous campgrounds are found scattered throughout the area. History, Mardi Gras revelry, a brand-new maritime museum and beautiful, bountiful wetlands and waters — there’s definitely something for everyone in Mobile.

Start by visiting Fort Conde and the adjacent Museum of History at 111 S. Royal Street. The French built the original fort in 1723; it served as the settlement’s defense for more than 100 years. It’s location was significant as it protected access to the region between the Mississippi River and the Atlantic colonies along the Alabama and Tombigbee rivers. Demolished in 1823 to make room for roads, it was reconstructed in 1976 to honor America’s bicentennial. It now serves as Mobile’s welcome center.

Mobile’s Gulfquestr National Maritime Museum’s 90,000-square-foot building, shaped like a vessel heading out to sea, is due to open in 2014

Here, you’ll learn about the influences of the native Taensa and Maubilia Indians, struggles between the various countries to claim and settle the area, the antebellum era highlighted by the cotton boom, Civil War battles and World War II shipbuilding endeavors. An impressive wooden canoe built by the Maubilia, a cannon from the CSS Alabama (a raider ship during the Civil War) and brand-new dioramas depicting colonial scenes are a few of the highlights.

Stroll down Royal and Dauphin streets to eyeball pre-Civil-War Federal-style architecture and the ornate cast-iron facades of Italianate buildings. Historical walking tour brochures are available at Fort Conde (or download one from www.downtownmobile.org on the Explore Downtown page). The self-guided tour weaves walkers past dozens of impressive buildings and Bienville Square, a city park established in 1850. Stop at the Cathedral Basilica of Immaculate Conception. Built from 1834 to 1849, it features 14 hand-carved Stations of the Cross.

What would a trip to the Deep South be without touring a plantation? Costumed docents lead guests through the Oakleigh Historic Complex at 300 Oakleigh Place.  Built from 1833 to 1850, the period homes showcase 19th-century antebellum living. The Oakleigh House features double parlors, a cantilever staircase and fine arts. Adjacent Cox-Deasy Cottage depicts furnishings of the working class while the Cook’s House portrays the living quarters for post-Emancipation servants. Original to the grounds, majestic live oaks still stand tall.

Park and Delta Safaris offer guided canoe and kayak trips through backwater trails. Be sure to bring a camera to photograph rare plants and immense trees.

The mighty USS Alabama, a 680-foot-long battleship that served in combat during World War II, stands sentry over Mobile Bay. Battleship Memorial Park houses the battleship, the submarine USS Drum, a pavilion full of aircraft and miscellaneous military equipment. There are 12 levels open for viewing in the battleship. To get a feel for this impressive craft, walk the gangway — the passage along the side of the ship’s upper deck. Aviation enthusiasts will enjoy viewing a Stratofortress, an Albatross, a P-51D Mustang and other military airplanes spanning World War II through the Cold War era. Pack a lunch and have a picnic on the grounds; 2703 Battleship Parkway.

If you’re lucky enough to visit during Mardi Gras season, you’ll hear the above phrase often. More than 50 mystic societies organize masquerade balls, parades and other activities. Some alcohol-free zones ensure family friendly areas. During the last two weeks before Mardi Gras, parades take place daily. Horns blare from Dixieland marching bands and gifts are tossed from elaborate floats. In addition to colorful beads and toys, Mobilian maskers have been tossing Moon Pies since 1956. A schedule of parades can be found at www.mobilecarnivalmuseum.com/index.cfm/2014-Parade-Schedule.cfm. A trip to the Carnival Museum helps visitors celebrate Mardi Gras all year long. Patrons view lavish robes and jeweled crowns, learn about float construction and watch videos of past parades and balls.

Mobile’s GulfQuest National Maritime Museum (scheduled to open in 2014, as mentioned earlier) is located on the bay front. The 90,000-square-foot building is shaped like a vessel heading out to sea. Inside, a full-size replica of a container ship allows visitors to explore the captain’s quarters, the bridge and the main deck. Interactive exhibits will detail early trade routes, coastal environments, ship navigation and communication, marine weather and more than 300 shipwrecks in Mobile Bay.

At 10 miles wide and 40 miles long, the Mobile-Tensaw River Delta is our nation’s second largest river delta. Starting in the north at the confluence of the Tombigbee and Alabama rivers, the delta opens into the head of Mobile Bay through the Mobile, Spanish, Tensaw, Apalachee, Middle and Blakeley rivers. Pack your canoe and a camera; this is an especially scenic area. Boaters enjoy views of sleepy sloughs and bayous full of cypress trees and alligators. Pileated woodpeckers, eagles and belted kingfishers entertain birders. Amateur botanists search for wild orchids, bright-red cardinal flowers and carnivorous pitcher plants. Keep an eye out along the water’s edge for wild pigs, deer, turkeys and shell mounds created by the native Indians.

For guided trips into the ecolo­gically diverse delta, contact Delta Safaris. Located across from Meaher State Park in the new 5 Rivers Delta Resource Center, the outfitter offers interpretative tours aboard a 25-seat pontoon boat. You can also book one of its fishing charters or a guided canoe or kayak eco-trip. Excursions are customized according to your preferences. Adventurous visitors paddle deep into the swamp to witness the “Champion Cypress,” with a trunk that measures 27 feet around. The outfitter also offers canoe and kayak rental, as well as a shuttle service.

Mobile, Alabama, is rich in history and Carnival celebrations complete with formal masked balls and elegant costumes. This is one party you don’t want to miss.

Attractions include the Battleship Memorial Park