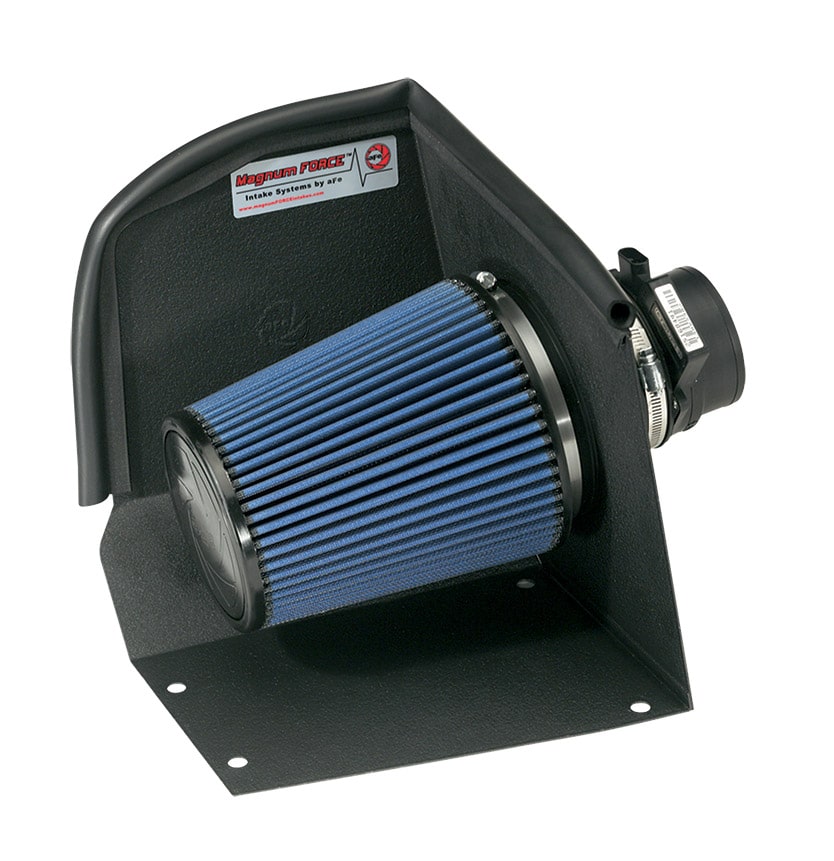 More power out of thin air. It’s something we’d all like to have — right after a personal money tree. But it is possible to increase horsepower with aftermarket air intakes and filters.

To fully understand how this all works, first we need to look at some background information. Atmospheric air contains about 20 percent oxygen, which is the only part of what actually combines with fuel in an engine to allow combustion and produce power. Almost all of the rest of air is nitrogen, which basically just goes along for the ride through the engine and is essentially inert. Therefore, a lot of air must be pumped through an engine, especially at higher rpm, and any restriction can reduce this flow.

Aftermarket air-filter housings can increase power, but ones with an open design may also increase intake-air noise levels compared to closed original-equipment designs.

It’s helpful to think of internal-combustion engines, like the ones in tow vehicles, as essentially air pumps that happen to burn fuel and air. Anything we can do to reduce restrictions to the flow can potentially allow the engine to produce more power — as long as the correct amount of fuel can also be delivered to the combustion chambers.
Internal combustion engines used in highway vehicles rely on atmospheric pressure to fill the cylinders with air. The exhaust strokes push the spent gases out through the exhaust, providing a low pressure (partial vacuum). This allows the incoming air to flow in, pushed by the relatively higher atmospheric pressure, when the intake valves open. Engines that don’t have any type of additional pump pushing air in (either a turbocharger or supercharger) are called naturally aspirated. However, even turbocharged and supercharged engines rely on atmospheric pressure to get air through the air filters and intake plumbing, so owners still need to pay attention to intake restrictions.
Air has the highest density at sea level (and a speck higher in those few places below sea level), and density decreases steadily in a linear fashion as we climb in elevation. Under standard conditions, sea level atmospheric pressure is generally agreed to be 29.92 inches of mercury (inHg) or 14.504 psi. For you folks in Canada and other metric nations, it’s 0.987 atm. The rule of thumb is that about 3 percent of air density, and therefore power, is lost in a naturally aspired engine (not turbocharged or supercharged), for every 1,000 feet higher we go. That means that at the top of Colorado’s Eisenhower Tunnel on Interstate 70, a naturally aspirated engine would be down about 33 percent from its sea level power, and at the top of Pikes Peak it would be down about 45 percent. Turbocharged engines are usually able to maintain near sea level power outputs up to about 10,000 feet.
Gasoline fuel injection adjusts the air-fuel mixture to correct for altitude changes, but carbureted engines don’t. So these engines also lose some additional power due to non-optimum fuel mixtures (usually overly rich) when operated in higher elevations than where they were jetted for (usually sea level).
Another factor that affects engine power and performance is air temperature, which varies the number of air molecules in a given volume of air (air density). As temperature rises, the molecules get farther apart, or less dense, which reduces power output. Hot intake air also makes a gasoline engine more likely to ping (detonate), which can lead to damage if it’s allowed to continue. In diesel engines, hot intake air reduces power and can increase combustion and turbine temperatures to dangerous levels.
To reduce these problems, it’s best to pick up air in the coolest spots at the front of the vehicle with the most direct airflow. However, it’s important not to draw in rainwater while driving in a storm, as this can soak and clog filters and cut off power completely. Avoiding water from deep puddles or stream crossings from entering the engine is even more important. Although rare, ingested water can hydraulic-lock an engine, causing severe internal damage that’s not covered by warranty and is very expensive to repair.
Air flows and behaves in a very similar fashion to water (which is easier to visualize because you can actually see water’s ripples and eddies), even though air is much less dense. To get water to flow faster and with greater volume, the diameters of the pipes are opened, bends are reduced and made smoother using a wider radius for less resistance. The same goes for air. We want to streamline the intake flow and remove resistance.
Since atmospheric pressure cannot be increased mechanically, it’s even more critical that airflow is improved to gain every extra molecule possible. Engines also have pumping losses, which is power that is expended moving air through the engine and out the exhaust. By reducing intake and exhaust restrictions, pumping losses in an engine are reduced and cylinder filling increased, which are keys to power improvement. Aftermarket air intakes generally have a reduced number of bends and/or increased radii, increased tube diameters, provisions for higher-capacity air filters and in many cases direct air from a cooler pickup point. However, sometimes they may not include provisions for required emission-control hardware or meet applicable smog regulations. Look for California Air Resources Board (CARB) executive order (EO) numbers on the products to ensure compliance in all 50 states.
Air-filter designs determine — to a great extent — the restriction of airflow into the engine. This can be measured on a flow bench, and some manufac­turers provide specifications, but make sure you compare apples to apples with the same starting pressures, etc. Aftermarket air filters run the gamut from stock replacements to high-volume, low-restriction units that can flow considerably more air. Pleating allows more surface area for a given size filter. A larger filter (if it fits) is available with some aftermarket units, and this can further reduce restriction due to pressure drop across the filter medium for a given size engine.
Besides airflow in cfm, look at micron specifications. The smaller the micron (particle size) rating, the less thorough the filtration. You don’t want to sacrifice filtration quality for high flow, as this allows more grit into the engine. Engine wear and damage can be caused by dirt and grit intake, and if it was caused by an aftermarket filter, warranty coverage could be denied.
Another choice is a cleanable oil-type or dry-type filter. Some owners prefer being able to clean and reuse air filters, particularly with larger, more expensive models. If you choose such a filter, make sure you follow the instructions to the letter. Clean the used filter thoroughly and apply exactly the recommended amount of oil. Over-oiled filters have been implicated in problems with contaminated mass airflow sensors, and this can be an expensive problem that, again, would not be covered by warranty.