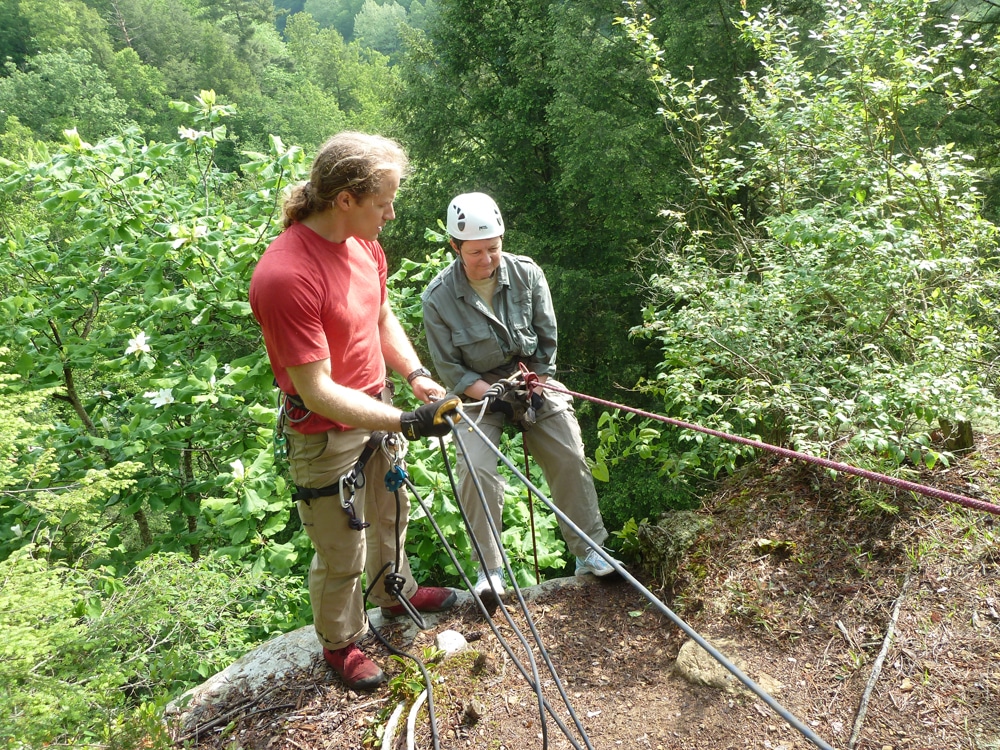 I am standing on the edge of a cliff with a 120-foot drop-off.

“Just put your heels over the edge, stick your butt out, and lean back into the rope,” says Dan, a muscular young climber who has led us up Big Cliff, a sandstone escarpment in the wilds of eastern Kentucky. “Step off and walk down the cliff’s face.”

Easy for him. He’s been scaling these cliffs in one of the country’s premiere climbing spots for a decade. It’s my first time rappelling and I’m beginning to think it was a crazy idea.

But I’m getting ahead of myself.

I’ve driven about 75 minutes southeast of Lexington, Ky., to challenge myself. First, I’m driving our Class C Jayco Greyhawk solo. I don’t have my steady companion along to figure out this motorhome’s sanitation and water systems, or to extend the awning. I’ve also vowed to get out of my camp chair and experience some fun – and somewhat scary – adventures.

When most people think about Kentucky, three things come to mind: bourbon, racehorses and bluegrass music. But Kentucky is also world class for adventuring and experiencing nature. It boasts 51 largely undiscovered parks, including 17 state resort parks (with lodges/cottages and restaurants), 23 recreational parks and 11 historic parks. Kentucky has more than 12,000 miles of hiking trails, and sandstone and limestone create impressive rock formations, including Mammoth, the largest cave in the world. In fact, whatever sport or activity you’re looking to do, Kentucky’s motto is “We’ve got a park for that.” Amazingly, Kentucky parks have no entrance fees and several offer terrific camping.

Arches and Cliffs in Kentucky

My first stop was Natural Bridge State Resort Park. The drive from Lexington is smooth on well-maintained divided highways. Close to the park, the roads become meandering two-laners with oak, maple, sycamore, ash, pine, spruce and redbud crowding the hillsides. With 44 to 49 inches of annual rainfall, spring in the Bluegrass State is green and lush; in the fall, it’s ablaze with color.

I take Exit 33 into the mountainous Red River Gorge area, part of Daniel Boone National Forest. I’ve reserved a spot at Middle Fork Campground, one of two RV campgrounds in the park, and snug the motorhome under some trees next to a rushing creek. The campground is spacious with plenty of room to extend the slideout and, after a little trial and error, unfurl the awning.

Early the next morning I meet Amy Tackett, who co-owns Red River Outdoors, specializing in climbing and rappelling expeditions. I join a group and we head to Torrent Falls, a private tract of trails, spectacular sandstone cliffs and Torrent Waterfall, a lacy curtain of water that plunges 165 feet over a huge rock amphitheater.

It’s here that climber Dan tells me to step off into thin air. My instincts tell me otherwise, but Dan’s confidence and the thick anchor rope encourage me to lean back and step down. One step, two, three, and, hey, I’m walking down the side of a cliff. As the rope slips through my gloved hand, the pulley lowers me. I stare at the cliff not daring to look down. Then, halfway down, the rock falls away and I am hanging in mid-air, 60 feet up. Dan yells down, “You’re good. Keep going.”

I look around from my perch. The forest is thick and green and the musty smell of wet earth fills my nose. Strangely enough, I’m not afraid. I pull the rope and lower myself until my feet touch terra firma. As Amy unhooks the heavy metal carabineers from my climbing harness, I’m grinning from ear-to-ear. My rappelling group and I celebrate over cheesy slices of pizza and Ale 8, a local ginger ale, at the climbers’ hangout, Miguel’s Pizza.

After lunch, I head back to Natural Bridge Resort Park and board the Sky Lift, a chairlift that climbs 600 feet to the top of Natural Bridge Arch. Park naturalist Brian Gasdorf leads a group of us down Laurel Trail, named for the mountain laurel’s delicate pinkish white flowers in full bloom. The trail ends at Look Out Point where we take photos of the panoramic view of the arch.

“Natural Arch was a narrow sandstone ridge eroded into a rock shelter,” the ranger explains, as we walk on the top of the 65-foot-tall arch. “Geologists think an earthquake caused the back wall to fall, forming the arch.”

At 24 feet wide and 78 feet long, the arch is big enough to drive an RV across. We stand above the tops of trees, including fluttery tulip poplars and big leaf magnolias with flowers the size of dinner plates.

We make our way down the trail and pass through “the squeeze,” a 2-foot passageway between massive rock walls. During high season, 3,000 to 4,000 people a day visit the arch and rangers have to direct traffic, allowing 50 visitors at a time through the squeezeway. Today, there’s only our group and a scattering of others who shimmy through passage to emerge under the arch.

Natural Bridge Arch is so big it’s hard to capture the entire structure with my camera. After snapping a dozen photos, we hike back down. I head to camp and, later, drift off to sleep listening to the creek babble outside my window.

Waterfalls and White Water in Kentucky

The following day, I drive two hours south to Cumberland Falls State Resort Park. Called the “Niagara of the South,” the park is named after Cumberland Falls, the second largest waterfall by volume in the United States. With millions of gallons of water coursing over its 125-foot-wide cascade, standing on the edge feels dizzying. On average, about 3,500 cubic feet of water per second (CFS) course over its face, but four days of rain has caused the muddy chocolate brown torrent to gush at a breathtaking 7,000 CFS.

I camp in the park’s tree-lined gravel campground next to Bill and Okcha Watkins from Hawaii, who are on a three-year RV odyssey to explore the United States. They’ve heard about Cumberland Falls and have come to see it for themselves.

Not only is Cumberland huge, it’s the only falls in the country with a moonbow, an eerie shaft of light that arcs across the falls during the full moon. Unfortunately, I’m a week early, so I opt for a raft trip down the river with Sheltowee Trace Outfitters.

After a sobering safety film, we gear up with helmets, paddles and personal floatation devices. Max, our 20-something river guide, instructs us in basic raft commands: “Forward paddle, back paddle, rest.”

Fifteen of us scramble into three rafts. We sit on the edges and hold on by jamming our feet under pontoon-like seats. This is a beginners’ river of class two and three rapids. Our first rough water, called “the initiation,” is a bumpy series of waves that make our stomachs churn. Max yells, “Paddle forward,” and we strain into the paddles. We emerge on the other side and feel triumphant when Max says, “Great job, guys. I like you already.”

The Cumberland is a rise and drop river with adrenalin-fueled rapids followed by calm, almost lake-like water. In the rapids, we focus, following Max’s commands. “Paddle forward two, paddle back, rest.” In calm sections, we enjoy the greenery, watch hawks and buzzards wheel overhead, and startle a couple of great blue herons fishing in the shallows.

At one point, we pull over and several of us leap into the muddy water, the guys trying to outdo one another with cannonballs. Farther along, we pause for sandwiches, chips and drinks.

We’ve passed through most of the white water when we come to a final big rapid. The rain has transformed this class three rapid into a four and the pudding-like water swirls and froths angrily. Max pulls over to plot our path.

“Paddle forward four,” Max commands as we head into the maelstrom. He skillfully dodges a huge boulder on our left. The raft drops into a hole and spins wildly. “Paddle backward,” roars Max. We push the paddles against the water’s force. “Now forward.”

The raft pops out of the churning waves into calmer water. “Paddler’s salute,” shouts Max and we raise our paddles, congratulating one another.

Off-roading and Zipping in Kentucky

On my final Kentucky adventure day, I drive the motorhome three hours east to Evarts, a small community that’s becoming known as an ATV/four-wheeler hot spot. It’s home to the Harlan County Ridge Runners, a national off-roading club, that rides on hundreds of acres of reclaimed coal land. Like nearby states, Kentucky is rich in black gold and mining companies strip mine large tracts of land. When the coal is mined out, companies are increasingly reforesting the land with native grasses, plants and trees and allowing recreationalists, like off-roaders, access.

Preston, a former club president and long-time off-roader, and several club members meet those of us gathered to experience off-roading. Club members are happy to show people what the sport is all about. Since I ride motorcycles, one of the members lets me ride his ATV, a squat four-wheeled motorcycle that climbs up steep, rocky terrain like a goat.

With helmets and some brief instruction, we’re off. A line of four-wheelers and other ATVs roar up old mining and logging roads. At first, I struggle shifting the clutch-less bike, but after a few tries, I get the hang of it.

With all the lush greenery, it’s hard to believe just a few years ago this area resembled a moonscape. I wrestle the vehicle over the rough roads – up, down, over rocks, through pools of muddy water. It’s a thrill. And all too soon, we cruise back, a bit weary and muddy, but exhilarated.

After a quick lunch of potatoes and fried chicken (Kentucky’s favorite dish), I stand with a group of fellow adventurers at Black Mountain Thunder Zipline, a challenging 12-station course reputed to be one of the best in the country. For me, this is the ultimate test. All my life I’ve been terrified of heights. It was one thing to walk backward off a cliff-face and not look down. It’s another to stand on a platform high above the forest canopy and launch myself along a thin steel cable across 400-foot-deep ravines at speeds reaching 60 mph.

Cricket, the young zip guide, snaps my harness onto the cable. “This is a self-stopping zip line,” she says cheerily. “You put a gloved hand up on the cable and pull down to slow down. Do you understand?”

“Yes,” I croak, feeling like I don’t understand a thing.

She instructs me to hold onto the cable with one hand, the straps in front with the other, and sit with my feet stretched out. “Ready?” she asks.

Suddenly, I’m launched, rocketing across the gorge, suspended by a cable that disappears into a shadowy thicket of trees across the yawning canyon. The wind roars in my ears, the trees below streak by. I’m flying.

The young man on the opposite platform signals me to slow down and I pull down on the cable, slowing my approach and glide smoothly onto the landing pad. I grin when he says, “You were perfect.”

After a dozen heart-pumping zip flights, I head back to Lexington. At the Kentucky Horse Park, a 1,200-acre state park that offers 260 shady, park-like RV sites and daily horse exhibits and competitions, I pass riders jumping horses over barriers. The elegant equines arch their necks and swish their tails as they clear the jumps.