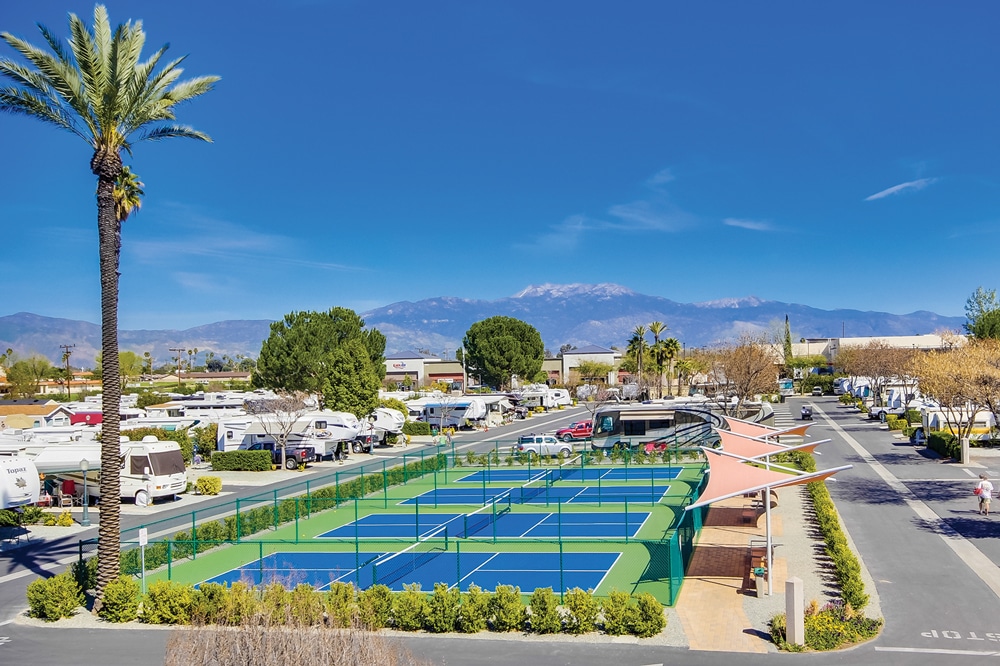 More and more RV parks and resorts across the U.S. are adding pickleball courts to their on-site amenities

“In all my years working in the RV resort business, I have never seen a sport, other than golf, that is this popular,” said Vickie Jepperson, manager of Pueblo El Mirage RV & Golf Resort, which responded to the competition and built 16 more pickleball courts, which were completed two years ago.
The pickleball courts at Pueblo El Mirage are now so highly regarded that the resort hosts one of the largest pickleball tournaments in the world each February – the Arizona State Pickleball Championships.
RV resorts across the country now recognize that if they want to cater to baby boomers, they need to offer pickleball.
“Pickleball has become a mandatory, expected amenity,” particularly at the highest quality RV resorts, said Greg Sidoroff, vice president of operations for La Jolla, California-based Sunland RV Resorts. Sunland offers pickleball courts at Golden Village Palms RV Resort in Hemet, California; Emerald Desert RV Resort in Palm Desert, California; and Silver Palms RV Resort in Okeechobee, Florida.
Like a miniature version of tennis, pickleball involves hitting a ball over a net to opposing players, but it requires only one-fourth of the space of a tennis court. This makes it much easier and less physically taxing to play than tennis, hence its popularity with baby boomers.
“Pickleball is a main focus for our amenity upgrades across the country,” said Dan Perlis, a regional vice president of operations for Chicago-based Equity LifeStyle (ELS) Properties, which has installed pickleball courts at 35 RV resorts across the country.
Pickleball is a natural fit for ELS resorts, Perlis said, because it’s a very social game that involves four players – two on each team – rather than two opposing players, like tennis. “Because there are more people involved, the sport becomes more social, and this is what our resorts are all about,” he said. “We’ve even been converting tennis courts into pickleball courts.”
And while Sunbelt RV resorts that cater to winter visitors are most likely to invest in pickleball courts, RV parks and resorts in snowy climates are also seeing the merits of having pickleball facilities.
J & H RV Park in Flagstaff, Arizona, converted some of its tennis courts to pickleball courts, according to park owner Jo Ann Mickelson. ELS, for its part, has pickleball courts at 16 RV resorts in Oregon, Washington, Michigan, Ohio and Virginia.

Voyager RV Resort in Tucson, Arizona, is one of 16 Equity LifeStyle (ELS) Properties resorts across the country that have pickleball courts.

From a cost standpoint, RV resorts are finding that pickleball courts are a more lucrative investment than tennis courts because they can entertain a lot more people using the same amount of space, said Wendell Johnson, general manager of 1,284-site Palm Creek Golf & RV Resort in Casa Grande, Arizona.
RV resorts that invest in extensive pickleball facilities can also host pickleball tournaments, which helps generate even more business. Palm Creek has 24 pickleball courts and hosts in-house and open tournaments.
“We have had several people come in RVs for a tournament and then come back to stay with us during the following winter season,” Johnson said. “We have also had many non-RVers come for a tournament and later rent or buy a home. Our 24 pickleball courts have been a great marketing tool for Palm Creek.”

According to the USA Pickleball Association, the game was invented in 1965 on Bainbridge Island, Washington, by three dads – Joel Pritchard, Bill Bell and Barney McCallum – whose kids were bored with their usual summertime activities. 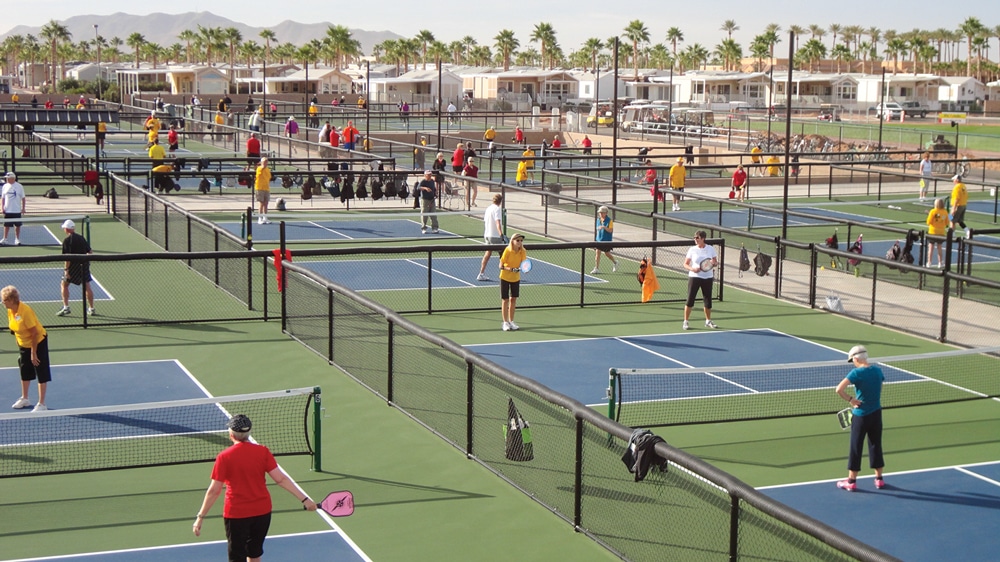 Some RV resort operators told MotorHome that interest in tennis is waning, while demand for pickleball continues to grow. But Foster, who plays both tennis and pickleball, said she doesn’t see pickleball replacing tennis as much as she sees it absorbing aging tennis players.
“A lot of tennis players, as they age and as their knees start giving them problems, go to pickleball because it’s a shorter court, but you can have the same level of aggressiveness that you have in tennis,” she said.
Foster added that people can play pickleball at whatever level of intensity they want to play. “I play both tennis and pickleball for the exercise,” she said, adding, “I exert as much energy playing pickleball as I do tennis.”
Pickleball also requires less technical skill than tennis, so it’s easier to master, which makes it accessible to a greater number of potential players, said Seth Harper of Sky Valley Resort in Desert Hot Springs, California, which installed its first pickleball courts in 2001.
RV resort operators across the country, meanwhile, are adding more pickleball courts to keep up with rising demand.
“We put in our first two pickleball courts in 2011. Then we added two more in 2013. And this summer we’re putting in two more,” said Cherie Suddarth, manager of the 756-site Gold Canyon RV and Golf Resort in Gold Canyon, Arizona, adding, “Pickleball is a great activity for people to meet each other and have fun.”