A Whale of a Motorhome

The Chevrolet Corvair Ultra Van evokes imagery associated with the massive aquatic mammals, and owners of the rare coaches are happy campers

The year 1960 ushered in an era of change in the United States. Upheaval was in the air, from John F. Kennedy’s election to the dance explosion of Chubby Checker’s “The Twist”– not to mention the naming of the air-cooled Corvair as Motor Trend’s Car of the Year. It was this last development that captured the attention of aircraft designer Dave Petersen, who had been dreaming of building a new kind of motorhome. He envisioned a motorhome that would be light and nimble, and highly maneuverable, while providing its inhabitants a wide, unobstructed view. Chevrolet’s new groundbreaking rear-mounted power package was exactly what Petersen needed to complete his vision. Four months later, his prototype Ultra Van (then called the Go Home) was born.

For its time, the Ultra Van was remarkable. The Class A industry was still in its infancy, and most motorhomes were versions of a truck chassis with a “trailer” bolted to the top. The Ultra Van was different. Built like an aircraft, it had no frame or chassis. The rounded front and rear were constructed of a composite material, while the center section was a series of C-shaped ribs to which the aluminum skin was riveted. Cast-aluminum A-frames were mounted in the front wheel wells, doubling as a platform for wide bench-type seats. The engine was tucked under the large back bed, creating open space for a wet bath and a full galley. A unique under-floor design integrated the aluminum tanks into the structure, adding to its strength without substantially increasing weight. The result was a surprisingly roomy 22-foot-long, 8-foot-wide motorhome with more than 6 feet of headroom that could be powered by a minimal 80 hp. All of which would certainly qualify the Ultra Van as a classic ride – even if it didn’t look suspiciously like a cartoon whale.

A true blast from the past – a five-motorhome Ultra Van convoy (including Mini Mo and Whale) turned plenty of heads in the middle of the Arizona desert.

It’s a distinction that modern-day owners embrace, referring to their motorhomes lovingly as “whales on wheels” and some even naming them after the marine mammal. It seems that to see an Ultra Van is to love one – at least for all the owners we have met. Carl Jones still remembers the first time he came across one on eBay.

She came over and looked closely at the screen. After a minute she said, “You know, it’s so ugly that it’s cute.”

It was all the license he needed. Now they are the proud owners of Righteous Coach, a 1968 Ultra Van and the couple’s first motorhome. That was seven years ago, and it took three years of what Carl refers to as “rehab” to bring the motorhome back to life.

“It has been rebuilt, re-floored, reupholstered and repainted,” he says with a laugh.
It was a renovation made possible by the Corvair’s popularity with collectors. Carl notes that, despite its age, several companies still manufacture or supply rebuilt parts for the engine and Powerglide transmission used in the Ultra Van. For Carl, the trick in taking on such a restoration was having the ability to do the work himself – a sentiment echoed by every owner I interviewed.

“When you buy an Ultra Van, you need to understand you’ll be in for a lot of work,” agrees Chuck Hansen, who purchased his 1969 motorhome, Whale, with wife Cyndie in 2007. “You have to be adventurous … and it helps to have a credit card.”

In their case, the two were already self-proclaimed “Corvair nuts,” but did not know much about RVs. When they picked theirs up, Chuck began by taking it apart until he found something that worked. 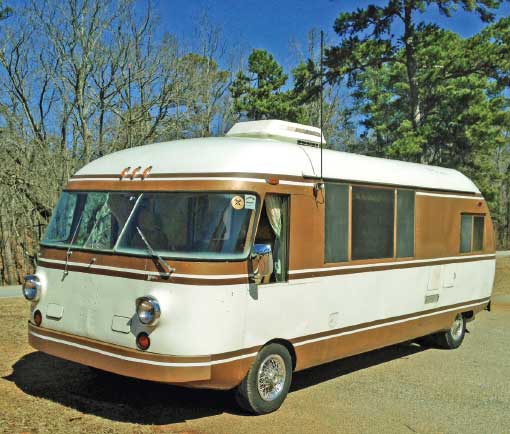 Thar She Blows!
Only 330 Corvair-powered Ultra Vans were produced before production ended in 1969. A dozen or more are currently available on the used market, ranging in price from $500 for a true project to $22,000 for a turnkey motorhome. To learn more, check out the Ultra Van Motor Coach Club (UVMCC) website www.corvair.org/chapters/Ultra Van.

“I took it all apart,” he says, only half-joking.

Updates included disc brakes, air suspension and a 3-liter fuel-injected engine, rebuilt by a Corvair expert, that has twice the power of the stock counterpart. Cyndie, with the help of the couple’s daughter, did the interior reupholstering, and Chuck replaced the flooring and the air conditioner. The original cabinets, stove and generator remain. The Hansens also added a few whimsical touches, like a colorful whale clock, to enhance their themed dÃ©cor.
Along with Cyndie’s 1964 red Corvair, Whale frequently garners attention – and accolades – at Corvair shows.

The original retro dash and between seats table on the Mellos’ Mini Mo.

The Hansens aren’t alone. Molly Bacon and Chris Brown even got an award for Turkel, their 1968 Ultra Van, at a Volkswagen show. Invited because of Turkel’s air-cooled engine, they were competing against 125 VW campers and modified Bugs, and didn’t expect to be recognized. Instead, “we got the Host Club Choice Award,” Molly says proudly.

It is no wonder. Turkel is a little like a time machine – one step inside and you are transported back to the early 1970s. A previous owner decorated the motorhome with a vintage gold color scheme and shag carpet, to which the couple added period-correct touches like an original lava lamp, a green glass 7-Up bottle, 1960s-era throw pillows and a 1970s camping cookbook. Everything is a blast from the past, right down to the melamine tableware.

The Ultra Van’s galley as seen in the Jones’ Righteous Coach.

Despite its vintage appearance, Turkel is definitely travel-worthy. Purchased in 2014 for less than $5,000, it had a fresh rebuild on the air-cooled, 95-hp Corvair engine, and the generator and air conditioner have been replaced. For the latter, the couple chose a high-efficiency Coleman unit with a heat pump that could be powered by a lightweight 2.6-kW Kohler. Their power needs are minimal, as they chose to forego a microwave or a TV.
“Simple is better,” Chris says, and Molly agrees. “We want to get away, leave some of the world behind.”

Getting away is also at the top of the list for Ultra Van owners Jerry and Patty Mello. They bought Mini Mo, their 1968 motorhome, in 2009.

“I’ve had Corvairs since 1975, so I knew about the motorhomes, but I didn’t really want one,” says Jerry, who was instead looking for a vintage Corvair Rampside to restore.

Chuck and Cyndie Hansen pose with their award-winning Corvair vehicles, including their motorhome, Whale.

The purchase of an Ultra Van was his wife’s idea. She pointed out that a motorhome would be more comfortable and functional for travel, and they started their search, eventually purchasing one that was the victim of an aborted renovation. It had been sitting in storage for years, its interior totally gutted – headliner down, panels off, insulation removed – and its exterior in dire need of repair.

Jerry began by replacing all the wiring, adding a second alternator and separating electrical systems for automotive, RV and AC loads. He also added a dual-fuel generator, air conditioner with heat pump, power rack-and-pinion steering, and upgraded the brakes and the suspension. Then he tackled the exterior with the help of his brother, a former aviation metalsmith and body shop owner. They replaced “about half” of the aluminum skin, repaired the compound curves and repainted Mini Mo – a job Jerry estimates at about 500 work-hours.

“I’ve had every threaded fastener off this motorhome at least once,” he says.
The result is more than just a “modern but retro” look – it is a fully functioning motorhome. Last year alone, Patty and Jerry spent 102 nights in Mini Mo on the road, traveling and attending rallies and shows. Because fewer than 80 of these motorhomes are still on the road, owners are on a first-name basis, and most are active in the Ultra Van Motor Coach Club, over which Jerry Mello presides, and Carl Jones calls “Ultra Vans and the crazy people who own them.”

It might be true that you have to be just a little crazy to take on a 50-year-old motorhome, but it only takes one look at the Ultra Van to understand why these couples made that choice. With its Corvair heritage and its unique body, the “whale on wheels” is the ultimate classic ride.