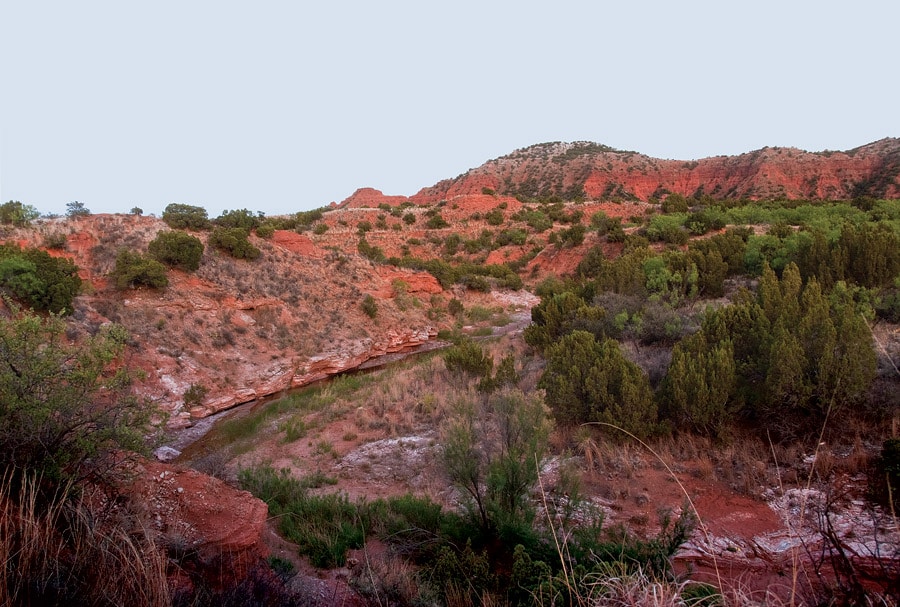 Standing in the peaceful silence of dusk one night, a full moon rising, we could see nothing but red rock, green foliage and clear skies. It was an amazing sight to behold.  But this wasn’t the scene the first time I visited Caprock Canyons State Park & Trailway in Texas, when a tornado warning was in effect. I still recall the ranger knocking on the door of my RV and telling me to hightail it to the restrooms where the shelter was. “You’ll be safer in there,” he warned.

I made the restroom my refuge for a couple of hours, as I listened to a weather band radio with a couple who were camp hosting. I was single then, and we had been the only three visitors in the park. The storm passed to the north, and when I returned to my campsite, my pickup and fifth-wheel were encased in a sheet of ice.

Somehow Caprock Canyons beckoned my return, this time with my husband of 12 years. Though the weather on this visit was sometimes hot and windy, Mike and I experienced much milder conditions in comparison to my first visit. But the winds, rain, snow and ice are to be appreciated in these parts, as it is these elements that over millions of years fashioned the park’s wonderful terrain.

The 15,313 acres of bluffs and steep, colorful canyons make Caprock Canyons an explorer’s haven. Visitors can hike its unique trail system and bike or drive the main park road in search of fantastic scenes and abundant wildlife. The park is located along the Caprock Escarpment about 100 miles southeast of Amarillo and roughly 100 miles northeast of Lubbock. The escarpment is a long, narrow rocky formation stretching as high as 1,000 feet. Forming a natural transition between the lower Rolling Plains to the east and the high plains of the Llano Estacado to the west, water sources such as the Red, Brazos and Colorado rivers weave their way through the Caprock Escarpment. There’s no doubt that the park stands in sharp contrast to the flat plains typical of the Texas Panhandle.

The plant and animal life of the park vary in relation to the geology. Places above the escarpment usually denote High Plains with short-grass prairie, including blue grama, buffalograss and sideoats grama. In the canyons, especially in the western half of the park, look for scrub oak and several species of juniper trees. In the bottomland sites along the Little Red River, look for mid to tall grasses such as Indian grass, Canada wildrye and little bluestem. In addition, there are hackberries, wild plum thickets and cottonwood trees.

During our visit in May we were hoping to see lots of wildflowers, but we visited during a time when all of Texas and many other states were experiencing a drought, so we didn’t see much in the way of these lovely gems. However, we did find the road lined with brilliant yellow flowers called Engelmann’s daisy, and we are sure the yuccas and cacti might have blossomed after our visit.

In addition to wildflowers, which we always pursue in spring, Mike and I search year-round for animal life, which includes mammals, birds and reptiles. Even insects are on our list of must-sees. Caprock Canyons boasts of a number of wildlife species. More than 12,000 years ago the region was home to the now-extinct mammoth and giant bison. There were even camels and horses when the climate was cooler. Black bears and gray wolves also roamed the region, but were no longer found in the area after the 1950s.

Today’s visitors may see an assortment of mammals including pronghorn, mule deer, white- tailed deer, coyotes, bobcats and African aoudad sheep, an introduced species. We searched and searched for the aoudads, but never saw them. We did, however, see a few bison. Part of the Texas State Bison Herd, the wooly animals were penned up when we visited, but there is talk of releasing them to roam throughout the park. Smaller mammals include raccoon, jackrabbits and gray fox.

We also spied two feral hogs on one hot, mid-afternoon in the South Prong Primitive Area. Early another morning we saw a herd of mule deer on a spit at Lake Theo. On our last night in camp, a raccoon woke us when it knocked over our plastic container filled with pots and pans. I don’t know what it was after, but we are always sure to never leave food out.

We spent some time at Lake Theo, a permanent water source and a good spot from which to watch for animal life. Formed when Holmes Creek was dammed, Lake Theo is used by various species of waterfowl. Some 175 species of birds, including roadrunners, red-tailed hawks and turkey vultures, may be seen in the park, and once in a while someone spots a golden eagle. There are also 14 species of lizards here, including collared lizards, and more than 30 species of snakes including prairie rattlesnakes.

Items found in the park provide evidence that ancient peoples hunted the now-extinct giant bison. Artifacts from the Archaic period, which lasted from 8,000 to 2,000 years ago, include boiling pebbles for heating food, oval knives, corner-notched or indented dart points and grinding stones for processing seeds. Later, the Apache ruled the region until the Comanche shoved them out in the 1700s. The Comanche were here along with the Kiowa when the U.S. Army forced them onto reservations in the 1870s.

By using the 90 miles of multi-use trails for hikers, bicyclists and horseback riders, you can explore the same park inhabited by earlier cultures. The trails range in difficulty from steep climbs and descents to trails with less than a 3-percent grade.

Eagle Point Trail is a great hike and a wonderful mountain bike ride. Two miles long, the trail is the shortest in the park. In addition, check out the wonderful hiking loop that starts at the trail- head for North Prong Primitive Area. Go north then west up the steep, rugged, rocky ridge to the Haynes Ridge Overlook Trail. From the ridge you’ll find fantastic views of the area and be- yond — and the views only continue to get better as you hike the ridge. En route, be sure to make a side trip to Fern Cave. In addition to ferns, you’ll see plenty of poison ivy, too, so beware.

A sign points the way and claims it’s a mere 0.2 mile one-way to the cave. We thought it felt like more than a quarter mile, but maybe that’s because we dropped several hundred vertical feet to the cave. You won’t find any ferns or poison ivy in the newest addition to the park, but you will find 60-plus miles of a 1920’s era railroad. Obtained in 1992 when the Texas Parks & Wildlife Division (TPWD) acquired a donation of 64.25 miles, the trailway opened in 1993 as part of the National Rails-to-Trails program that converts abandoned railroad rights-of-way to hiking, biking and equestrian trails. The multi-use trail crosses 46 railroad bridges with the bridge spanning Los Lingos Creek the most impressive.

Mike and I enjoyed a morning ride on the Trailway, riding our mountain bikes from the trail- head at Monk’s Crossing (MM 284.5) south to the Clarity Tunnel (MM 289). En route we saw some wild hogs and two hikers and not much else until we reached 742-foot-long Clarity Tunnel. We chose to ride to the tunnel because it is one of the last active railroad tunnels in Texas. More importantly, it is the summer home for a colony of Mexican free-tailed bats.

The largest bat populations occur from April through October. Because they are sensitive to traffic, noise, light and humans, visitors must walk through the tunnel. Walking is mandatory as the bat guano (which is like a fine powder here) is thick and almost impossible to ride through. Most importantly, walking stirs up less dust than riding. Hats and long sleeves are recommended as you pass through the tunnel. Visitors must also be quiet and they are asked not to shine their flashlights on the bats.

From bats to bison to trails to cliffs to adventure, Caprock Canyons State Park & Trailway drew me back once already, and I’m certain this Texas draw will beckon my return again.

Tips for Your Visit

RVers should note that grades can be steep in Caprock Canyons. In fact, trailers are not allowed past the Wild Horse Campground due to the 16 percent grade. The Wild Horse area consists of 12 campsites with corrals, picnic tables, grills, and water for horses. Just prior to the horse area you’ll find Honey Flat Camping with 35 sites. Both 30-amp and 50-amp serv- ice are available in the tree-blessed campground, as well as picnic tables, free showers, water, flush toilets, sewage dumping station, and wheelchair accessible sites.  Overnight tent camping is allowed on the trailway, but you’ll need a permit. Visitor services are limited, so you’ll have to carry all the water, equipment and supplies needed for your trip. Water is available in some areas, but sources are not dependable. Rattlesnakes are common. More information can be found at the headquarters located three miles north of Quitaque (pronounced Kitty Quay) on Farm Road 1065. Call (806) 455-1492 or visit www.tpwd.state.tx.us. Because Caprock Canyons is located in a remote part of Texas with the nearest larger towns approximately 60 miles distant, Quitaque is a great place for a quick stop, offering a café, gas station and convenience store.