A Taste of New York 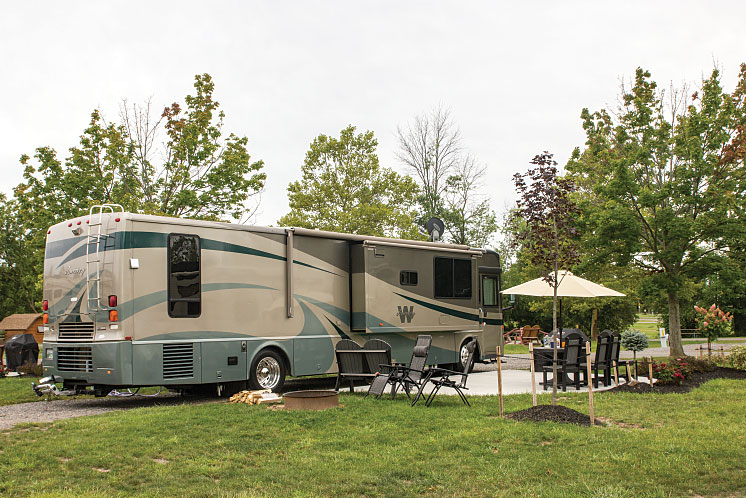 Savor waterfalls, wine and Buffalo wings on a motorhome trip through the Empire State

We started our west-to-east journey across New York with a two-night stay at the Niagara Falls KOA in Grand Island. It’s perfectly situated, 7 miles south of Niagara Falls and 13 miles north of Buffalo. There is plenty to do at this KOA. You can rent a canoe, paddleboat, or banana bike; go fishing; relax at the RV site; or socialize with neighbors, especially if you have one of the RV sites with a concrete patio, outdoor furniture and a fire ring.

Niagara Falls
Since we were excited to see Niagara Falls for the first time, we headed north after we got settled. Established in 1885, Niagara Falls State Park is the oldest state park in the U.S. Our tickets to Maid of the Mist gave us access to the Observation Tower, 282 feet above the base of the gorge. From there, visitors can see the three falls that makeup Niagara Falls — American, Bridal Veil and Horseshoe — and the skyscrapers on the other side of Niagara Gorge in Canada. Maid of the Mist boats have been taking people for close-up looks at Niagara Falls since 1846. It’s easy to tell the American tour boats from the Canadian ones. On the Maid of the Mist, passengers are given blue rain ponchos; on the Canadian Hornblower boats, they get maple-leaf red. We took an elevator down to the dock and boarded the boat. Everyone donned ponchos to prevent getting soaked by the 600,000 gallons of water flowing over the falls every second. 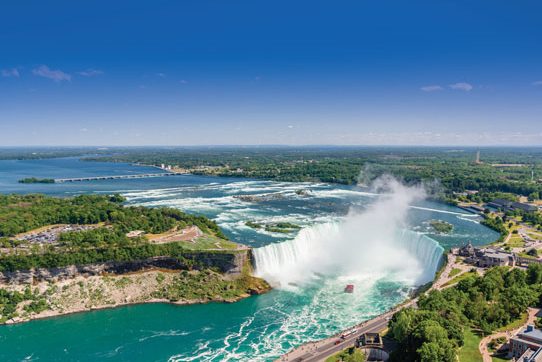 Niagara Falls State Park is the oldest state park in the U.S. More than 3,100 tons of water flow over the three falls every second.

The closer we came to Horseshoe Falls, the wetter we got. During the five minutes we spent in the basin of Horseshoe Falls, the deafening sound, erratic winds and churning white water generated by the cascades plunging 167 feet gave us a newfound respect for this natural wonder.

After returning to the dock, our next stop was Cave of the Winds. This was an opportunity to walk within 20 feet of Bridal Veil Falls and get even wetter. Standard issue for this tour was a yellow rain poncho and souvenir sandals. Wooden walkways led us to the highlight of the tour, the Hurricane Deck. Only the bravest walked to the corner of the Hurricane Deck where they got showers to remember for a lifetime. There’s no cave behind the falls; it collapsed in 1954, but the name stuck.

With passports in hand, we drove across the Rainbow Bridge to see the falls from the Canadian side. We found parking next to the Table Rock Welcome Centre, a short distance from Horseshoe Falls. We walked along the sidewalk, at times, so close to the falls, we felt the mist. Gardens were in full bloom with beautiful flowers. We especially enjoyed the Oakes Garden Theatre with its curved stone pergola overlooking formal gardens and an amphitheater. Behind the pergola, a Japanese-style garden and lily pond offered respite from a busy day. When the sun set, the falls were lit with various shades of blue, red, yellow and white from LED lights on Illumination Tower and other locations. If you are a fan of fireworks, check the schedule before planning your trip.

Buffalo
We spent the following day in Buffalo, starting with a two-hour tour of Frank Lloyd Wright’s Martin House. Built for businessman Darwin D. Martin between 1904 and 1905, it’s considered one of Wright’s finest Prairie Houses.

The residential complex consists of six interconnected buildings. After Martin’s death in 1935, the complex sat vacant and deteriorated from 1937 to 1954. The pergola, conservatory and carriage house were demolished in 1962. Phase I of the work to restore the entire complex to its 1907 condition began in 1996. During our visit, the restoration was in its final phase. Two features of the house that stand out most in my mind are the fireplace and the conservatory. The wisteria mosaic fireplace, which opens into the living room and foyer, is covered with about 20,000 hand-painted, gold-infused glass tiles. The 100-foot-long pergola connects the main house to the conservatory. A full-sized cast of the goddess Nike, known as Winged Victory, stands in the conservatory, surrounded by greenery. The cost of the restoration was $50 million.

On the 90-minute Buffalo River History Tour, we learned about the city’s history and the impact of the Erie Canal on the region and the entire United States. The original canal ran 363 miles from the Hudson River near Albany to Lake Erie at Buffalo. The waterway was built in the 1820s to transport grain. This engineering marvel transformed Buffalo into the largest inland port in the nation and the unofficial grain capital of North America. Commercial traffic on the canal eventually declined when the railroads, highways and the Saint Lawrence Seaway became more economical for transporting goods. Some of the abandoned grain elevators along the Buffalo River are on the National Register of Historic Places. This area, called Silo City, is now used for 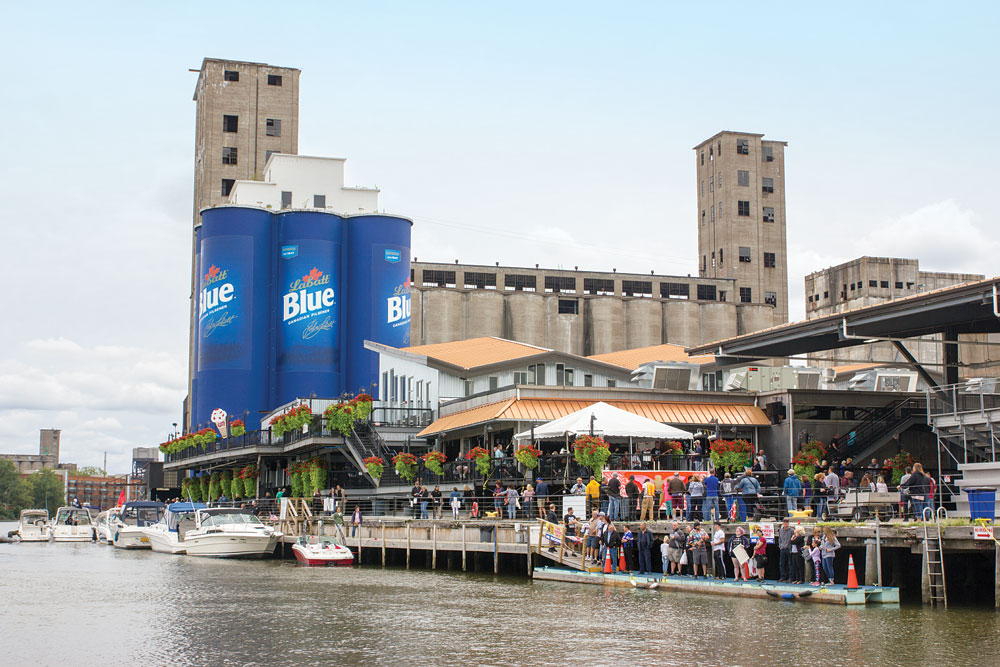 Buffalo RiverWorks is a former grain silo converted into a large entertainment venue with a brewery, restaurants and activities.

Everyone has eaten Buffalo wings, right? We went to the Anchor Bar in Buffalo where they were invented in 1964. Apparently, late one night, the owner’s son, Dominic Bellissimo, was tending bar when some of his hungry friends arrived. Dominic asked his mother to make them a snack. Teressa deep-fried chicken wings that had been reserved for soup and poured her secret sauce over them. They’ve been on the menu ever since. When we were placing our order, our waiter told us about another famous food with local origins — beef on weck. It’s roast beef served on a kimmelweck roll with horseradish. Yum! We left with a five-pack set of wing sauces so we could enjoy authentic Buffalo wings at home. 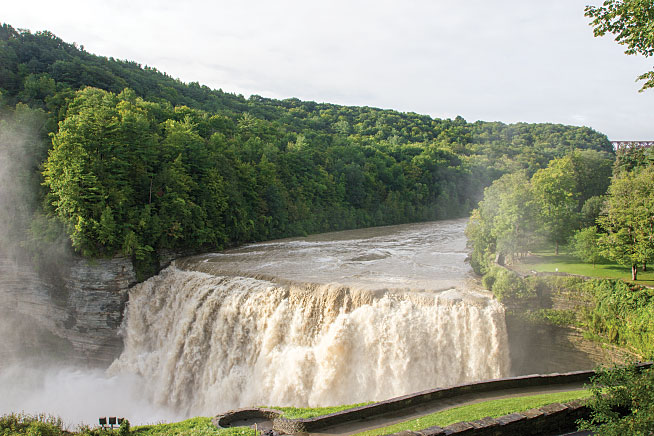 The Middle Falls in Letchworth Stat Park was formed by the Genesee River running through a deep gorge, almost 600 feet deep in places.

As I started planning our New York trip, I learned about Letchworth State Park, also known as “the Grand Canyon of the East.” We stayed there for three nights, in a picturesque site with electric hookups. In 2015, the park was voted best state park in the nation by USA Today readers. The Genesee River runs through a deep gorge, almost 600 feet deep in places. The 7-mile-long hiking trail along the gorge passes the three major waterfalls —Upper, Middle and Lower Falls — and several overlooks. There’s also plenty of parking if you’d rather drive.

The Glen Iris Inn is the former country estate of park founder William Pryor Letchworth. He bought the property in 1859. Prior to his death in 1910, he arranged for the house and surrounding property to be given to the people of New York as a permanent park. Glen Iris has a beautiful view of Middle Falls. We had a tasty breakfast there one morning before heading over to the Humphrey Nature Center.

Our arrival at the Nature Center could not have been more perfectly timed. Each day at 10 a.m. and 4 p.m., from late August through mid-September, monarch butterflies are released by the naturalists who have been raising them. The butterflies are tagged with small identification stickers. The naturalists log each butterfly’s departure date and sex with Monarch Watch. Last year, a butterfly from Letchworth was found in Mexico after flying 2,555 miles. Not only did we get to witness these tiny creatures departing on their marathon journey, but a few of us also got to help by offering a finger to the majestic butterfly and lifting it out of its enclosure.

Treats for all Senses
Our next stop was the conveniently located Clute Memorial Park Campground in Watkins Glen on the southern shore of Seneca Lake. It was less than a 5-minute drive to Watkins Glen State Park, another natural wonder with waterfalls. We followed the 2-mile Gorge Trail up past 19 waterfalls. The trail goes behind two of them: Cavern Cascade and Rainbow Falls. Since there are plenty of opportunities to get wet and muddy on this trail, it’s a good idea to wear closed-toed, sturdy shoes.

Glenora Wine Cellars, the first winery on Seneca Lake, was established in 1977. The region is known for its Riesling. I’ve always thought of Riesling as a sweet wine, but that’s not always true. Glenora has a dry Riesling with 1.3% residual sugar, and a sweet one with 3.6%. I liked both of them, and I’m not the only one. Glenora’s wines have been consistently winning awards, starting with its initial vintage.

Treasures on display at the Corning Museum of Glass include these Thread Vessels crafted by Toots Zynsky.

This Cascade Wall, created by George Thompson, is on display at the Corning Museum of Glass.

The Corning Museum of Glass is dedicated to the art, history and science of glass. The building that houses it looks like a work of art in itself, and there’s plenty to admire inside those walls too. A Chihuly tower graced the lobby. The museum’s collection includes pieces that have survived for 35 centuries. The Innovation Center features the first casting of a 200-inch disk from the Hale telescope, state-of-the-art fiber optic technology, and demonstrations of flameworking and glass breaking.

Buffalo has a Buffalo Wing Trail, and the Finger Lakes Region has four wine trails and Corning has a Chocolate Trail. Color me happy! When we left the glass museum, we popped into Dimitri’s Confectionery Treats to pick up a dozen melt-in-your-mouth truffles.

A few months before we left on our trip, we joined Harvest Hosts. The membership program allows RVers to boondock at vineyards, farms, and other participating facilities. For an annual fee of $79, it’s a great deal if you don’t need hookups, laundry facilities, Wi-Fi, or air conditioning. There’s no cost to stay overnight, but you are expected to make a purchase of wine or other products. Stays are limited to one night unless the host invites you to stay longer.

In the Finger Lakes Region, we finally had a night with comfortable overnight temperatures that would permit a good night’s sleep without air conditioning. We contacted Buttonwood Grove Winery to make sure they had room for us. They welcomed us even though it was the first day of harvest. After settling in, we admired our closest neighbor, Melody, a Scottish Highland cow, and walked around the property. Its romantic location overlooking Cayuga Lake makes it a popular wedding venue. We ordered a wine pairing that came with some local cheeses and sausage. Buttonwood won the 2017 Governor’s Cup with their 2016 Riesling; we bought a couple of bottles.

Melody, a Scottish Highland cow, was our closest neighbor at the Buttonwood Grove Winery.

The cheeses were delicious, and we set out to find some more. Our GPS led us to the Crosswinds Farm and Creamery Store. Much to our surprise, it was a tiny, unattended building on the farm. We picked what we wanted from the refrigerator, then left cash in the designated location. That’s a way of doing business we don’t see very often.

That night I reflected on our time in New York. I expected the waterfalls to be awesome, and they were. I knew we’d enjoy the wines and wings. Perhaps my fondest memories came from the impossibly green vineyards and forests, uncrowded roads and the flutter of butterfly wings.