A Tale Of Two Beauforts 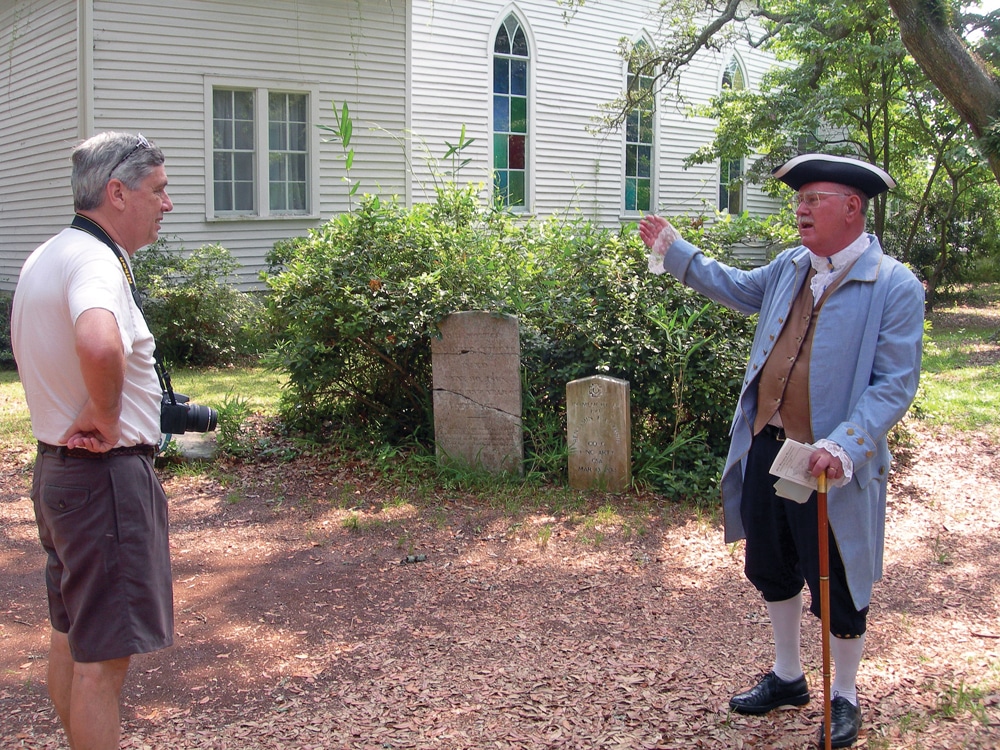 One Beaufort has a spooky old burying ground and a museum full of pirate booty. The other offers moss-draped live oaks and shrimp boats straight out of “Forrest Gump.” Both Carolina towns lure motorhome travelers who love historic sites, fresh seafood and spacious beaches.

Step one: Learn the pronunciation and emphasize the first syllable as Southerners do. North Carolina’s “Bow-furt” is off the beaten path, about 120 miles from Interstate 95, on the mainland near Cape Lookout at the southern end of the Outer Banks. South Carolina’s “Bew-furt” is three times larger and located in the Lowcountry, just 25 miles off I-95 between tourist-heavy Charleston and Savannah.

The quiet village of Beaufort, N.C. (population 4,300), has been aglow since Budget Travel magazine’s poll named it “America’s Coolest Small Town” in February. This little seaport has drawn visitors since 1718 when Edward Teach, also known as Blackbeard, ran aground near Beaufort Inlet. The pirate headed ashore and left behind his flagship, Queen Anne’s Revenge, to sink and disappear beneath shifting sands.

Centuries later, in 1996, salvage divers came upon an intriguing mound of underwater objects. Marine archaeologists eventually confirmed that the artifacts were from Blackbeard’s vessel; the Queen Anne’s Revenge had awaited discovery for almost three centuries just 25 feet below the water’s surface.

Visitors now can view Blackbeard’s cannons, leg irons, muskets, bottles, gold dust and much more at the North Carolina Maritime Museum, a treat for all ages. Ask the museum staff what’s new – research divers continue to raise piratical treasures like a 3,000-pound anchor hauled up in May 2011.

The Beaufort Historical Association sponsors an Old Homes Tour each June. Ticket holders can wander through a dozen private houses and, some years, the tour may include a peek into Hammock House where Blackbeard once lived. Greeters at the association’s visitor center on Turner Street will provide tour information for nine historic buildings in the town’s 12-block district listed in the National Register of Historic Places.

Be sure to ask for a guide map of the Old Burying Ground around the corner on Ann Street. Established in 1709, this cemetery and its weathered gravestones bear tales of soldiers, sea captains and star-crossed lovers who now rest beneath ancient trees and tangled vines.

For lunch or dinner, you can stroll to several casual restaurants including Beaufort Grocery, a local favorite housed in a former food store on Queen Street. Or try Clawson’s 1905 Restaurant & Pub in a brick building on Front Street facing Taylor Creek and Carrot Island, where wild ponies often graze.

Some 375 miles south, South Carolina’s Beaufort (population 12,000) is sophisticated and scenic; it’s no wonder it was a backdrop for movie classics like “The Big Chill,” “The Prince of Tides” and “Forrest Gump.” As you drive through the region, you’ll admire twisted live oak trees graced with silver-gray Spanish moss and miles of Lowcountry marshes that lead from one island to the next.

This Southern belle’s focal point is the Henry C. Chambers Waterfront Park, which reopened in 2007 after a $7 million renovation. Abuzz with activity, the park is a great place to sit in a swing and watch boats go by on the Beaufort River. Downtown restaurants and coffee houses have shady back porches facing the park where you can people-watch while waiting for lunch or dinner to arrive. One such spot, Plums Restaurant, serves up coastal favorites seven days a week including wild-caught shrimp and grits, gumbo, crab cakes, and fried oysters.

Carriage tours give an overview of the Beaufort, S.C., historic district.

A block from the waterfront on Bay Street, shoppers can browse for books, jewelry, antiques, craft supplies, garden accessories and more. Couples and families alike will enjoy an overview of the historic district and its antebellum homes from a horse-drawn carriage; tours depart throughout the day from the park.

For more local color, head for 801 Bay St., to visit Verdier House, Beaufort’s only historic home regularly open to the public. Once the property of a wealthy indigo and cotton planter, the Federal-style mansion circa 1804 is now a museum. And for a rare look inside private homes and plantations that are usually off limits, get tickets for the Historic Beaufort Association’s Fall Festival of Houses and Gardens held each October.

When you’re ready to explore beyond downtown, the Sea Island Parkway (U.S. Highway 21) will lead east to Saint Helena Island where the Penn Center, originally a school for freed slaves, now promotes the Lowcountry’s African-American Gullah culture. Along the road you may see vendors, some descended from slaves, offering handmade, coiled sweetgrass baskets for sale.

Continue on Highway 21 and stop just before the Harbor Island bridge to pick up fresh seafood to cook in your motor­home. Shrimp just off the boats is sold at Gay Seafood Co., and the trawlers and rickety docks near the store will remind you of the fictional adventures of Forrest Gump and Lt. Dan.

Cross the bridge to reach Harbor, Hunting and Fripp islands on the Atlantic Coast. The only publicly accessible lighthouse in South Carolina is here at Hunting Island State Park. First built in 1859, it has 167 cast iron steps you can climb to an observation deck with spectacular views of the surrounding islands and marshes. With five miles of ocean beaches bordered by a wooded campground, Hunting Island is South Carolina’s most popular state park.

Although the two Carolina Beauforts have distinct personalities, both are three-season destinations offering sports-minded motorhome travelers opportunities for biking, kayaking, fishing and golf. People who often visit Myrtle Beach, S.C., can include one of the Beauforts in their vacation within an easy half-day drive.

You can expect comfortable temperatures in this region from March through November, although you may want to head for breezy beaches on sultry summer days. Spring and fall are ideal for sports and sightseeing, but bring insect repellent and sunscreen any time you come.

With its proximity to I-95, South Carolina’s Beaufort makes a great stopover for Florida snowbirds or couples looking for a romantic weekend getaway. Its North Carolina counterpart is the jewel of the Crystal Coast, a prime area for family beach vacations. Get to know one – or both – of these fetching twins on your next coastal motorhome adventure.