A Road Trip from Hell: 10 Wickedly Cool Places to Visit this October 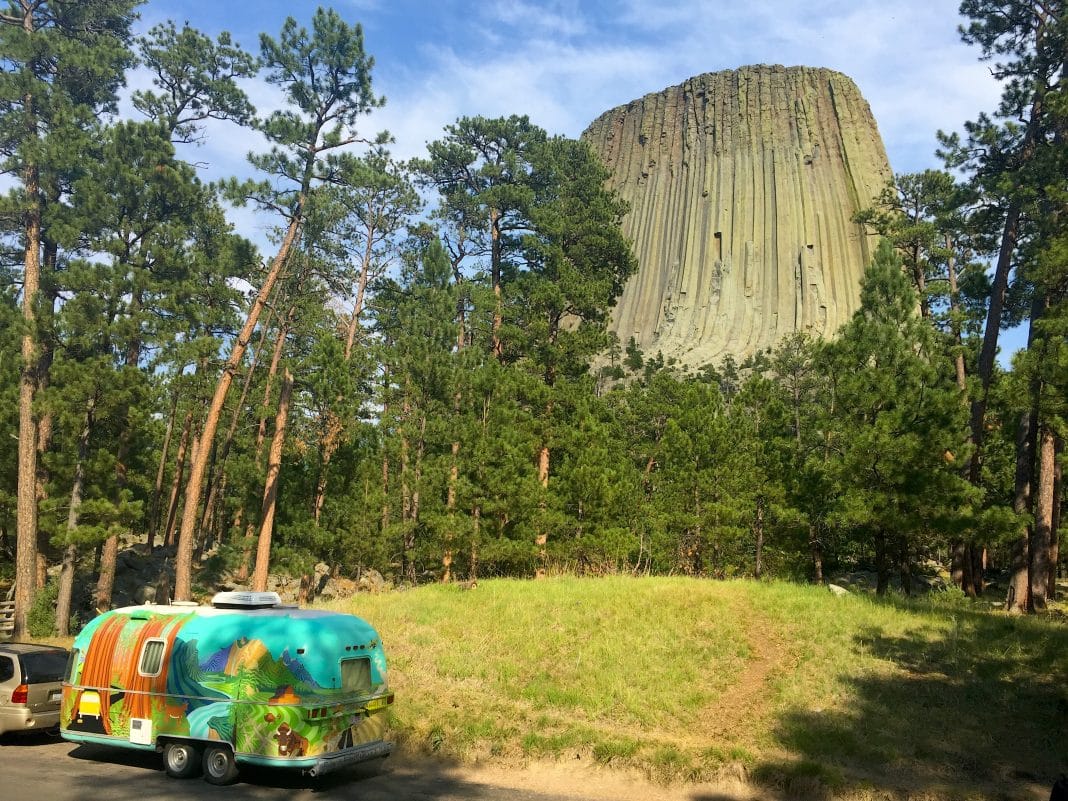 You might ask the question, “Why the heck are so many places named after Satan?” Though many geographical locations live up to their devilish names, some spots are more like a slice of heaven. After visiting countless national and state parks around the country, we’ve had a helluva time figuring out what the fascination is with the Prince of Darkness. Between peaks, waterfalls, canyons and gardens, it seems like there’s a burning obsession with the underworld, with names like Satan’s Kingdom, the Diablo Range and the ominous-sounding Lucifer Falls. Understandably, many of these places are located in rugged areas, especially along the coastline, dangerous mountaintops and harsh desert terrains.

Long before the Puritans landed at Plymouth Rock and the Spanish conquistadors invaded the South, native tribes had their own names for their culturally significant landmarks. When the Europeans and early settlers arrived, they designated their own names, often misinterpreting the Native American folklore. Though the titles vary between cultures, the locations undeniably bestow powers that transcend the human realm and leave their visitors in awe of their natural beauty.

When planning a road trip, there’s no better time to visit the parks than October. The foliage is flaming with color, the scorching temperatures have subsided, and the hellish crowds have returned home from summer break.

Here’s a list of 10 sinfully awesome destinations that would tempt the devil himself.

Probably the most recognizable landmark on the list is Devils Tower, the first designated national monument in the country. Situated in northeastern Wyoming, this basalt butte is composed of igneous rock and is presumably the core of an extinct volcano. Rising 867 feet from its base to the summit, which sits at an elevation of 5,112 feet, it’s a favorite spot for climbers, as well as a sacred landmark to the Sioux, Kiowa and Lakota tribes. The site is often recognized as the iconic backdrop of 1977’s “Close Encounters of the Third Kind.”

North America’s deepest river gorge straddles the border of Oregon and Idaho and can be found beneath the jagged Seven Devils peaks. At 7,900 feet in depth and 10 miles wide, this geological giant has got the Grand Canyon beat by almost 2,000 feet. When copper and gold were discovered in the 1880s, pioneers would make the dangerous trek down the Snake River to this rugged and isolated stretch of wilderness. Today, it’s a popular destination for rafters, mountain climbers and hikers.

Here, we hiked down to the Devil’s Punchbowl, which can only be accessed during low tide. Photo Credit: Cate Battles

Oregon’s shore is without a doubt one of the most spectacular coastlines in the country and luckily for visitors, its 363 ocean-hugging miles are open to the public. Devils Punchbowl is a naturally carved rock bowl created when two sea cave ceilings collapsed. During high tide, you can witness from above the ocean water violently churning around like a bubbling cauldron. During low tide, you can access the open ceiling cave from the beach, and afterward explore the many colorful tide pools that surround it.

Just down the road from Badwater Basin, is Devils Golfcourse in Death Valley at nearly 200 feet below sea level. Photo Credit: Cate Battles

Perhaps the harshest environment in the United States is Death Valley’s Devil’s Golf Course, situated over 200 feet below sea level in the Mojave Desert. This large salt pan earned its name back in 1934 when the National Park Service guidebook stated, “Only the devil could play golf” on its surface. Its rough texture is due to the large halite salt crystal formations left behind by Lake Manly, a mineral-rich body of water that at one time covered the valley floor. During the summer months, the area becomes an inferno with a scorching record temperature of 134 degrees Fahrenheit.

Diablo Lake gets its gorgeous color from minerals in the melting glaciers. Photo Credit: Margo Schmiederer via Pexels

This far-from-hellish reservoir is nestled beneath the glaciated peaks of the North Cascades Range and boasts a vibrant turquoise color that dazzles the many visitors who come to enjoy its breathtaking views. In 1930, the Diablo Dam was created along the Skagit River and has since offered kayakers, hikers and fishermen a beautiful landscape full of recreational opportunities. 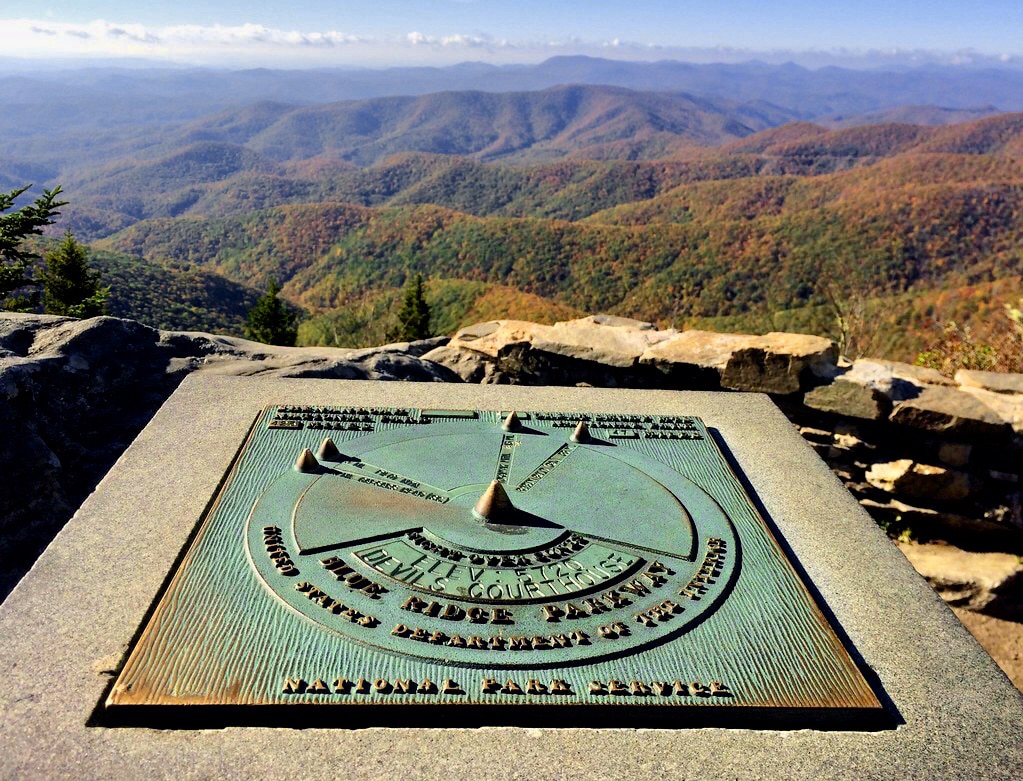 One of the best places to view fall foliage is the Blue Ridge Mountains of western North Carolina. At milepost 422 of the parkway, you can start the trail to Devil’s Courthouse which takes you to a peak that offers panoramic views of four states. Within Pisgah National Forest, Devil’s Courthouse reaches an elevation of 5,720 feet and though the hike up can be strenuous, the heavenly scenery can’t be beat. After the hike, you can cool off around the corner at Courthouse Falls.

Landscape Arch in the Devils Garden region of Arches National Park in Moab, Utah is the third longest natural arch in the world, spanning 290 feet across. Photo Credit: Cate Battles

More like the Garden of Eden, this spectacular desert landscape within Arches National Park is home to an array of stunning rock formations. Rock fins, hoodoos and arches created from eroded sandstone are scattered around this geologically unique feature and offers some of the best hiking trails in the area. One of the most prominent landmarks in Devils Garden is Landscape Arch, which is considered to be the fifth-longest natural arch in the world, spanning 290 feet across.

Unlike some of the other destinations, this place definitely earned its diabolical name. From searing hot springs and mudpots to steaming fumaroles, this volcanic marvel has the largest concentration of hydrothermal features within Lassen Volcanic National Park. The area was named after the unlucky explorer, Kendall Bumpass, who managed to keep his soul but lose his leg as the poor wretch broke through the crust of a blistering mudpot. Ouch! Big Boiler, the largest fumerole in the park, really gives Lucifer a run for his money, as it’s one of the hottest recorded vents in the world, with temperatures fuming up to 322 degrees Fahrenheit.

Devils Lake was formed during the last glacial retreat with no visible inlet or outlet. Photo Credit: Jonathan J. Castellon via Unsplash

Devil’s Lake got its name partly by accident, as white trappers misinterpretted the local Ho-Chunk tribe’s name for the lake, Tawacunchukdah, meaning “spirit” or “holy” lake. The lake was originally a gorge of the Wisconsin River prior to the last ice age and is situated in a deep chasm with no visible inlet or outlet. Since the mid-19th century, the lake has been a popular recreational destination for boaters, hikers, climbers and fishermen.

Devils Postpile is a great stop along Highway 395 in the Eastern sierras and just a few miles down the road from Mammoth Ski Village. Photo Credit: NPCA.org

Established in 1911, Devils Postpile National Monument preserves one of the world’s best examples of columnar basalt. This towering geological feature is 60 feet high and due to radiometric dating, it’s believed to have been created by a lava flow within the past 100,000 years. At one time, Devils Postpile was within Yosemite National Park’s borders, but the discovery of gold in Mammoth Lakes led to a boundary change that left the site on adjacent public land. Later, conservationists were instrumental in persuading the federal government to protect the area. Today you can visit this amazing landmark along with Rainbow Falls. While in the area, also check out Mono Lake, the abandoned mining town of Bodie, and Wild Willy’s Hot Spring for a steamy good time!

Author, photographer and artist Cate Battles travels the country full time with her husband, Chad, in their renovated, mural-painted 1976 Airstream Argosy. The couple’s travel blog, Argosy Odyssey, chronicles their adventures as they tour North America with their pet goat and dog. You can read more of Cate’s dispatches for Trailer Life here and follow the Battles on Instagram and Facebook.