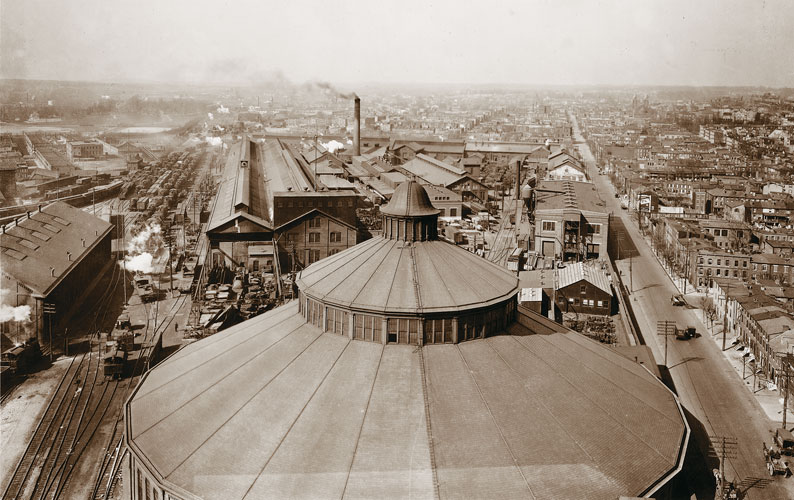 Seven score and ten years have passed since the start of the Civil War, and the Old Line State is celebrating this occasion with commemorations large and small along its Civil War Trails. The trails lead to hundreds of related sites — battlefields, cemeteries, museums, historic farms, churches, houses, railroad stations, inns and more. We recently explored sites along the trails on a four-day road trip, seeing these important sites, watching reenactments and learning how — from the words of Union Major General John Adams Dix — “the loss of Maryland would have been the loss of the national capital, and perhaps, if not probably, the loss of the Union cause.”

The state was important to both North and South for its proximity to Washington, D.C., and for its largest city, Baltimore, which was a key railroad link to the west. Nearly 20 battles and skirmishes were fought in this divided state, including South Mountain; Antietam, the “bloodiest day in American history,” with more than 23,000 soldiers killed, wounded or captured; and Monocacy, the “battle that saved Washington, D.C.”

Our trip began in Baltimore, where on February 23, 1861 President-elect Lincoln, en route to his inauguration in Washington, D.C., had come through under the cover of darkness and in disguise after learning of assassination threats, and where the war’s first casualties would later fall. Five days after the Union surrendered Fort Sumter in South Carolina, on April 19, 1861, Confederate sympathizers in Baltimore attacked Massachusetts troops headed for the capital in what came to be known as the Pratt Street Riot. When it was over, 12 civilians and four soldiers were dead and dozens were wounded.

A historic photo of Camden Yards in Baltimore.

We watched a reenactment of Lincoln’s first visit in the Gentlemen’s Waiting Room at the former Camden Station, which now houses the Sports Legends Museum at Camden Yards. Illinois reenactor Fritz Klein, an imposing “Lincoln,” briefly addressed the small crowd gathered, to explain that “concerns for our reputation are secondary to my concerns for the nation [as] I am now public property.” Lincoln, who made no address that first visit, was criticized in his day for having been secreted through the city.

An exhibit entitled “Riots, Railroads and the Coming of Mr. Lincoln,” which explores Civil War events and the early days of American railroading is on display at the museum. Camden Station, which opened in 1856, is the oldest major terminus of the Baltimore & Ohio Railroad. During the war the B&O was the primary link between the Capital and all points north and west. The museum also includes exhibits about Babe Ruth, the 1890s historic Baltimore Orioles, and more.

The nearby 40-acre, seven-building B&O Railroad Museum, home to the world’s largest collection of Civil War railroad equipment — “eight pieces with only 20 to 30 total remaining,” says museum historian Dan Toomey) — has recently opened “The War Came by Train” exhibit. Military and personal artifacts are displayed, and 23 historic locomotives and rail cars, including those from the Civil War era, form “spokes” of a giant wheel at the acre-size 1884 polygonal (22-sided) roundhouse, the roof of which was rebuilt following a blizzard several years ago.

The Maryland Historical Society, founded in 1844, recently opened a 5,000-square-foot exhibit entitled “Divided Voices, Maryland in the Civil War.” The exhibit brings the 1860s back to life with a time tunnel, live performances, music, hundreds of artifacts and more. The “Tragedy of Maryland” is told in three acts: “The Rush to War,” “The Real War” and “The Long Reunion.”

The Maryland Historical Society is a great place to look into the bloody history of the country.

Among the artifacts on display is a Confederate captain’s taupe-colored coat, shot away at the waist when the officer was gut-shot in 1862 at Cedar Mountain. Museum director Burton Kummerow explains that despite the serious injury the man miraculously survived (noting that 60,000 Marylanders joined the Union army and 20,000 the Confederate army).

Other items displayed include a Sharps carbine; Union army canteen; a flag, now frayed, that was presented to the Fourth U.S. Colored Troops in August 1863; a shadow box depicting Union dead at Antietam, the soldiers represented by star-shaped arrangements of “Minie” balls; and General Robert E. Lee’s camp chair, where he had spent a fair amount of time after he was thrown by his horse, Traveler, during Second Manassas, injuring both wrists. Also at the Maryland Historical Society, of particular interest, is the original copy of Francis Scott Key’s “The Defense of Fort McHenry” (later renamed “The Star-Spangled Banner”) written in September 1814 and which would become our national anthem on March 3, 1931. 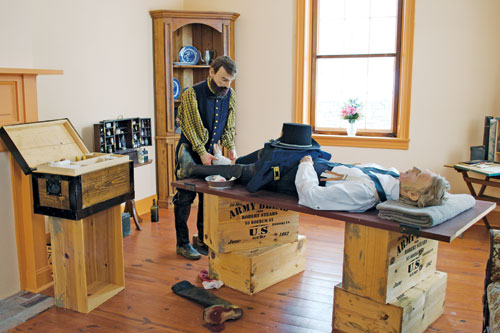 The Maryland Historical Society gives a glimpse of what America was like during the Civil War.

From Baltimore we drove west on Maryland Highway 144 through pastoral hills to historic Ellicott City. Rachelina Bonacci of Howard County Tourism explained that the town was founded in 1772 by Quaker brothers John, Andrew and Joseph Ellicott of Pennsylvania, who chose the picturesque site for establishing a flour mill. The brothers revolutionized farming in the area by persuading farmers — including Charles Carroll, the only Catholic signer of the Declaration of Independence — to plant wheat instead of tobacco. They also helped create Ellicott’s Mills (today’s Ellicott City), which became an important milling and manufacturing town.

One of the country’s earliest railroads, built in 1830, carried horse-drawn cars from Baltimore to Ellicott’s Mills. The station, of native granite, that still stands in the town was built the next year, and steel rails replaced the original wood rails as the B&O Railroad was constructed. The line was strategically important to the Union during the war, transporting troops and supplies to battle, and prisoners and wounded afterwards.

The restored station — oldest in the country, in use until 1949 for passenger service and 1972 as a freight house — is now a living history museum.

We continued west along Highway 144 to Mount Airy, then U.S. Highway 40 (Historic National Road) to elegant Frederick, founded in 1745, a “crossroads of American history.” Self-guided walking tours of the 50-block historic district include nearly two dozen sites, among them Kemp Hall (4 East Church Street) where in 1861 the state legislature met to decide if Maryland should secede. However, a quorum could not be reached as delegates with Southern sympathies had been arrested before they could reach the town.

Frederick offers dozens of attractions, none more fascinating than the National Museum of Civil War Medicine. Dozens of exhibits — life-size dioramas, murals, historic photos, artifacts and more — tell the medical story of the war: the aftermath of battle, care and comfort of the wounded, the caregivers and medical innovations that have had lasting impact on medicine still today.

Among the 2,500 or so medical items in the collection is the only known surgeon’s tent from the Civil War, used at Gettysburg, and in storage from 1864 till 1988. Other artifacts include surgical kits, drug chests, uniforms of medical personnel and more.

Museum director George Wunderlich, a former EMT, explained that despite misconceptions today, and films that show soldiers undergoing amputations with nothing to kill the pain, 95 percent of such operations were actually done with the patient under some form of anesthesia. He added that of the nearly 620,000 soldiers who died during the war, two-thirds died of disease, not from bullets or bayonets.

We continued west on Alternate U.S. Highway 40 through Middletown Valley, which George Washington described as “one of the prettiest valleys I’ve ever seen.” Once we reached Middletown, we turned south on Maryland Highway 17 toward Burkittsville and the three gaps — Crampton’s, Turner’s and Fox’s — that comprise seven-mile South Mountain State Battlefield. And for the record, Middletown Valley really is beautiful.

The first major fight on Northern soil — pitched battles for possession of the passes — took place here on September 14, 1862, less than two weeks after General Lee had invaded Maryland (and three days before Antietam). Pursued west by Union General George McClellan, mainly over the National Road to South Mountain, the Confederates, sustaining heavy casualties, were driven back but far from finished. 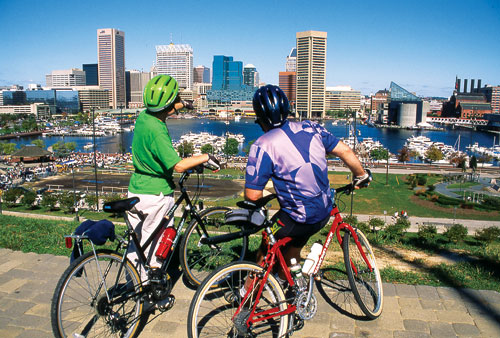 Biking is a great way to explore Baltimore.

Gathland State Park, at Crampton’s Gap near Burkittsville, was once home to George Alfred Townsend, a war correspondent who in 1896 built a monument to correspondents and artists who had reported on the war. The unusual monument, which could be the partial wall of a castle with tower, parapet, arches and clerestory, is inscribed with 175 names. Two buildings from Townsend’s estate survive nearby and house the park museum with artifacts.

After checking out sites, we returned to Alternate Highway 40 and continued west three miles to 73-acre Washington Monument State Park. The first monument to the former president is here, built in 1827 and rebuilt twice, most recently by the Civilian Conservation Corps in 1934. The 30-foot tall stone structure is listed on the National Register of Historic Places.

Our next stop was Antietam National Battlefield, where on September 17, 1862, in the culmination of General Lee’s first invasion of the North more soldiers were killed, wounded or missing than during the War of 1812, Mexican War and Spanish-American War combined.

General Lee plays a huge part in the history of Maryland.

General Lee had written to Confederate President Jefferson Davis that his army was “weaker than our opponents in men and military equipments.” Nonetheless, with Union General McClellan and his Army of the Potomac less than 25 miles away, Lee would divide his Army of Northern Virginia and attempt to envelop Harpers Ferry and move into Pennsylvania. But when a copy of Lee’s plan — Special Orders No. 191 — fell into Union hands, McClellan’s army gave chase, and the two armies — nearly 100,000 soldiers — met north of Sharpsburg in the bloodiest one-day battle in U.S. history.

Exhibits and 26-minute film “Antietam Visit” at the fine visitor center tell the story, and how simple landmarks took on legendary status once the smoke had cleared: the Cornfield (in five hours the 30-acre crop was leveled), Dunker Church, the Sunken Road (Bloody Lane) and Burnside’s Bridge. Some historians consider the outcome inconclusive, others a Union victory, but unquestionably the Southern invasion strategy had failed, as Lee’s army was forced to withdraw back across the Potomac.

Five days after the battle President Lincoln, who had been waiting for a Union victory, issued the preliminary Emancipation Proclamation — and from “Preserver of the Union” he became “the Great Emancipator.” Days later Lincoln toured the battlefield and  comforted the wounded on both sides, he told the Confederates, “I bear you no malice … we are enemies by uncontrollable circumstance.”

Civil War Trails delivers tour advice for anyone looking to learn more about the Civil War in person.

For our last stop on the trail we returned to Frederick and drove east on Maryland Highway 355 the few miles to Monocacy National Battlefield, where one of the war’s arguably most important fights and one of the last in Maryland took place.

Exhibits at the visitor center explain what happened. The Confederate army under General Jubal Early had crossed the Potomac into Maryland, bound for Washington, D.C., on July 5 and 6, 1864. Three days later a smaller Union force under Major General Lew Wallace attempted to arrest the invading divisions along the Monocacy River. Though unsuccessful, Wallace’s effort delayed Early’s long enough for General Ulysses Grant to send troops north from Petersburg, Virginia, to bolster the Capital’s defenses. Though Early’s advance reached the outskirts of Washington on July 11, he could not overpower the additional Union forces. The Capital was saved because Wallace had made Early late.

Wallace would later serve as Governor of New Mexico and Minister to the Ottoman Empire, and in 1880 would publish “Ben-Hur: A Tale of the Christ,” the best-selling American novel of the 19th century.

These stories along with the monuments, photographs, live reenactments and more are all a part of these historic sites along the Civil War Trails.