A New Leash on Life 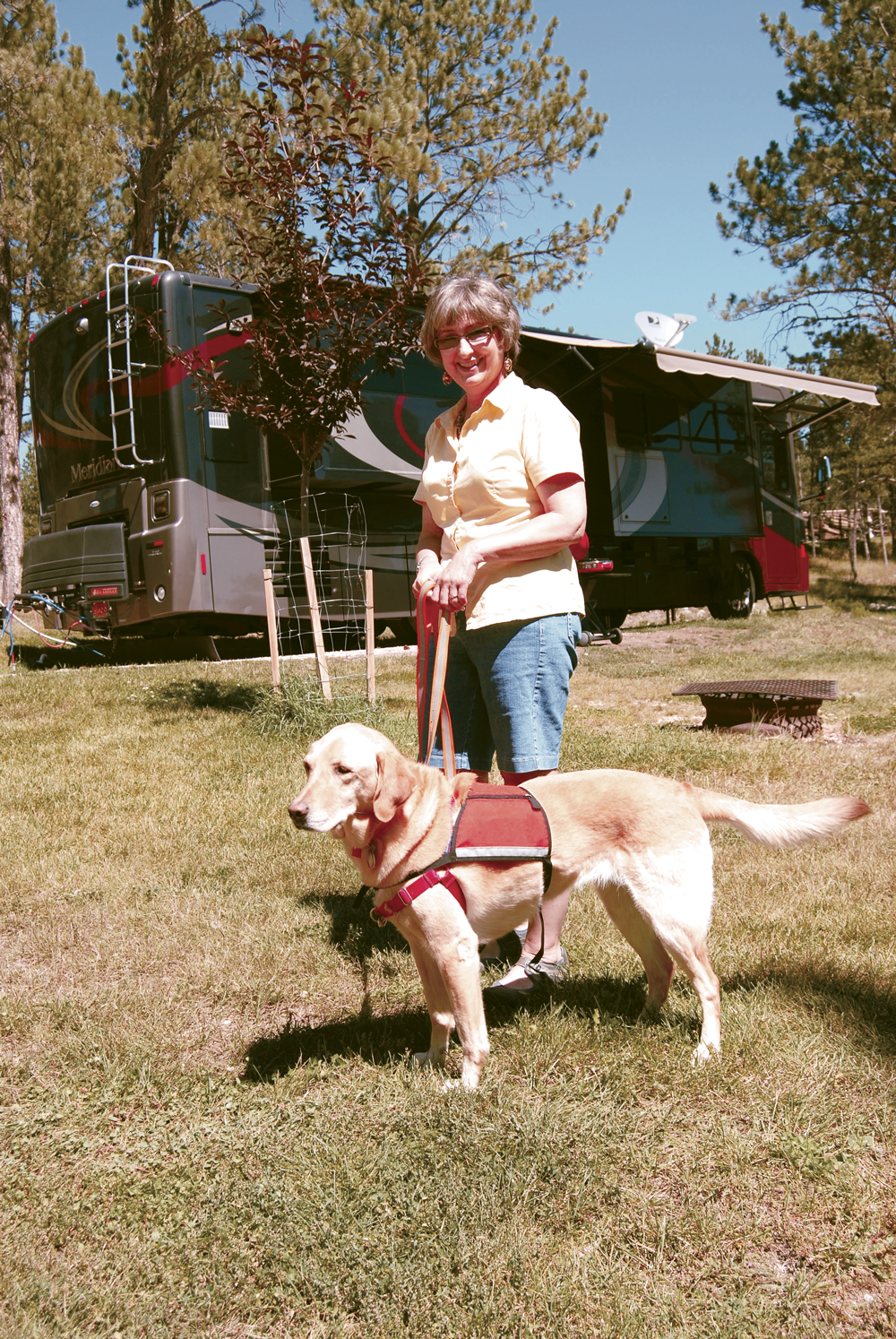 On a warm summer day in South Dakota, Karen Brockett is outside, like a lot of other RV owners, walking her dog and enjoying the scenery on a biking/hiking trail. A sudden movement of the dog’s head alerts Brockett that something is happening behind her, just in time to step away from a bicycle that speeds past.
“I think the cyclist may have announced herself first, but of course I did not hear,” said Brockett, who has coped with a hereditary, progressive hearing loss in both ears since she was a teenager. “Cher did, though.”

Like others with her level of moderately severe to profound hearing loss, Brockett has to rely on hearing aids, lip-reading and the ears of her spouse, if he happens to be nearby. She cannot detect sounds like doorbells, oven timers and smoke alarms. And with an invisible disability and no way to discern where sounds originate, Brockett’s safety is compromised.

In 2007, Cherelle, also known as Cher, came on the scene with her own disability issues. A golden/yellow Labrador mix, she was a “career change” dog from Guide Dogs for the Blind. After arriving at Central Point, Ore., with Dogs for the Deaf (DFD), a nonprofit organization that rescues and trains unwanted dogs for productive careers, Cher went through screening that revealed she had developed knee problems.
Meanwhile, Brockett tarried on the organization’s waiting list, willing to do anything necessary to get a Hearing Dog, even one that needed the two knee surgeries for installation of metal plates that DFD would pay for and arrange. After Brockett convinced them that she could handle whatever it might take to get Cherelle up to speed, trainers came back and forth to Brockett’s home, rather than the Central Point training facility, to teach the Lab how to become a working Hearing Dog.
During the seven years since human and dog joined forces, they have developed into a team extraordinaire. Cherelle alerts her partner throughout the day with a nudge of the nose and leads her to the source of household and RV sounds like microwave timers and door knocks. Brockett reinforces the dog’s training constantly with affection and salmon or chicken-flavored treats, and always reacts to Cher’s alerts whether she feels like it or not.
“You need to be consistent in working the sounds,” Brockett said. “If you don’t respond, the dog thinks it’s not needed.” The two work together to add new sounds, like a different cellphone ring tone. Some sounds are easier to reinforce than others; Cherelle is particularly fond of pizza deliveries arriving at the front door, for example. “She gives a very aggressive alert for that,” said Brockett.

Actress Betty White met Brockett and Cherelle at an October 2013, Dogs for the Deaf fundraising event called, “Hooray for Hollywoof.”

Other people must avoid responding to household sounds that fall within the dog’s training, and only Brockett dispenses Cher’s food and treats (although her husband, Larry Holcomb, fills in if she is sick or absent). “Larry had to remain aloof early on,” Brockett said, so that Hearing Dog and partner could form a strong bond.
Certified for public access, Cherelle can accompany Brockett to public places where pets are not allowed, and her orange leash and assistance dog jacket (complete with zipper pocket for scoop bags) provide a visible symbol of Brockett’s disability. When they are out together, she relies on Cher’s body language for awareness of her surroundings. “I watch her head and I know where sound is coming from,” said Brockett.
With Cher by her side, Brockett has regained her autonomy and become an advocate for the rights of deaf and hard-of-hearing people. She has served on the boards of the Oregon Communication Access Project and the Hearing Loss Association of Oregon, and worked with Corvallis-Benton County Public Library officials to encourage installation of an audio induction system (hearing loop) and a Communication Access Realtime Translation (CART) system for patrons.
In 2012, Brockett became a Volunteer Ambassador for DFD and makes presentations to community clubs and organizations on the nonprofit’s behalf. She was invited to speak about the positive impact Hearing Dog Cherelle has had on her life on Oct. 27, 2013, at a DFD fundraiser in Los Angeles. The two mingled and shook paws with guest host Betty White, and with Marlee Matlin, Lea Thompson and other cast members of the ABC TV show, “Switched at Birth.”

The National Park Service permits service dog teams to hike on trails like this one, which circles the base of Devils Tower, Wyo.

At ease wherever her partner goes, Cherelle adapted easily to RV life. Brockett and Holcomb bought their first motorhome shortly before the dog arrived, and the trio now tours the United States and Canada in a 35-foot Itasca Meridian. Holcomb has made cabinetry modifications, such as a compartment for Cher’s gear and a desk where Brockett can work on her blog, “Travels With Hearing Dog.”
“We took her to the Albuquerque Balloon Fiesta, with all the balloons taking off,” said Holcomb. Cherelle remained the picture of canine calm, even in the presence of horses transporting crowd control officers. During four months on the road in 2013, Cher visited Custer State Park in South Dakota, Devils Tower National Monument and Grand Teton National Park in Wyoming, then journeyed north through Montana into Alberta and British Columbia, Canada, before returning to Oregon.
Like many RVing dogs, Cher’s favorite sunny perch is the large front dashboard window where she can survey the campground scene. But she’s never off duty and has learned to “work the sounds” of the motorhome, such as a refrigerator alarm that beeps if someone accidentally leaves the door ajar, and even the tire-pressure alarm.
Cher wears a vest lettered, “Working Dog, Do Not Pet,” a visual reminder that people should avoid distracting service animals on the job. Her partner considers it positive when  well-intentioned admirers approach them wanting to pet, since she gains an opportunity to explain the role of a service dog. “It opens a dialog,” said Brockett. Her advice: “Ask the trainer, but don’t take it personally if they say no.”

Holcomb, Brockett and Cherelle travel together in a 35-foot Itasca Meridian motorhome.

Strangers sometimes ask Brockett, “How do I get one of those vests for my dog?” She explains, “If you do, it undermines the hundreds of hours of training.” Improper behavior by untrained, fake service dogs can make business owners resistant to providing access to the next legitimate team that walks in. DFD follows the strict guidelines set by Assistance Dogs International and requires four to six months of professional Hearing Dog training and a year of monitoring via regular written reports by the recipient after being paired with a dog.
Holcomb and Brockett recently moved into a new home near Albany, Ore., and Hearing Dog Cher has already begun working with her partner on the new sounds and challenges of an unfamiliar house and community. Once again, she has proven herself to be an essential member of the household. “I cannot imagine having to function without Cherelle,” said Brockett.

About Dogs for the Deaf

Many RV owners travel with their beloved dogs, which may be why the Good Sam Club began providing support to DFD in 1980, not long after the organization was founded by the late Roy G. Kabat, a Hollywood animal trainer. Kabat’s daughter, Robin Dickson, became his successor as CEO and President in 1986. Dickson recently announced her retirement after 32 years with DFD.
In 2012, to mark DFD’s 35-year milestone, the Good Sam Club contributed $191,036 to the organization, including donations from individual members, regional chapters and the club itself. Members throughout the United States also volunteer for DFD in a variety of roles. A page on the DFD website features donation details and photos.
DFD rescues dogs that may otherwise be euthanized from animal shelters, gives them full veterinary attention, trains them to become service dogs and matches them with applicants who need help and commit to maintaining the dog’s training. Other than a small application fee, there is no cost to any recipient to receive a dog.
Since 1977, DFD has placed more than 3,000 canines after professionally training them to become Hearing Dogs certified for public access, Home Hearing Dogs, Program Assistance Dogs, Autism Assistance Dogs, and Career Change Dogs, at an average investment of about $25,000 per team. DFD is a 501(c)(3) non-profit agency that receives no government funding and relies on donations of all sizes to carry out this satisfying, congruous mission that forever changes the course of two lives.
Tours are offered at DFD’s southern Oregon facility, the oldest Hearing Dog training center in the world, twice daily Monday through Friday. RV parking is available.
Dogs for the Deaf, 541-826-9220, www.dogsforthedeaf.org

Christine Goodier is a freelance writer and editor who lives on the North Carolina coast and travels with her husband, photographer Bob Goodier, in a Class B Sprinter motorhome.