A Motorhome Trip to Alaska 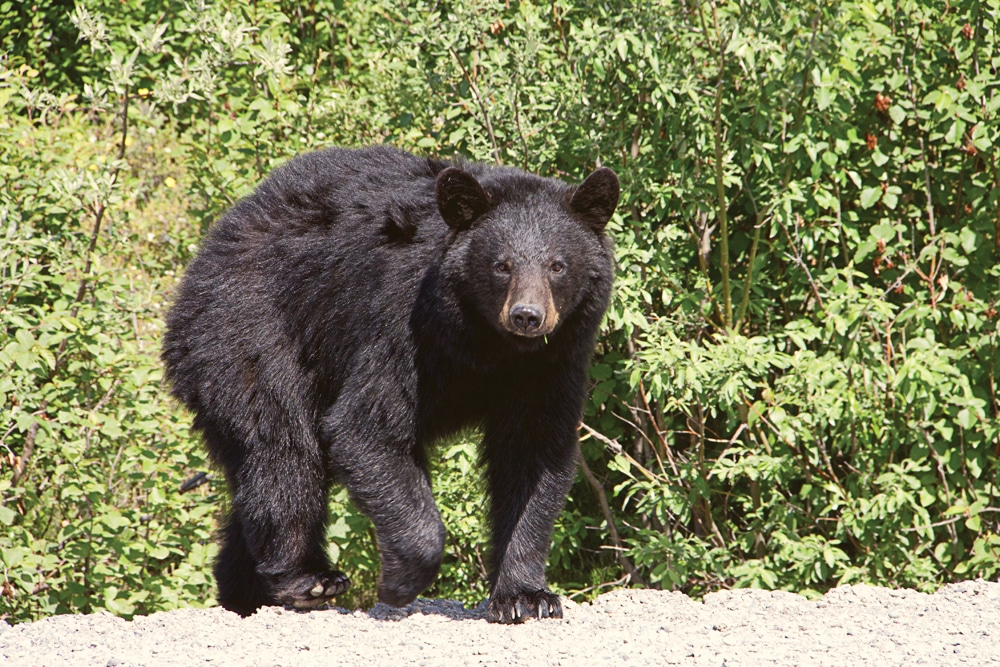 For More Information and a Free Guidebook, Click Here!

My romance with Alaska began as a child when I poured over books about dog sleds, grizzly bears and ice-capped mountains. I was enthralled by the radio and later TV show, “Sergeant Preston of the Yukon,” and his famous sled dog, Yukon King. Thinking of Alaska and Canada’s Yukon Territory makes me wonder what happened to the gold-embossed deeds to a square inch of Yukon land that came in boxes of Quaker Puffed Rice and Puffed Wheat during the 1950s.

Black bear along the Alaska Highway

At just 1 square inch per lot, Quaker’s 19 acres on the west bank of the Yukon River near Dawson City were subdivided into more than 21 million miniature tracts of land. Originally homesteaded by Malcolm McLaren in 1911, Quaker purchased the land near present day Top of the World Highway in 1955 for its breakfast cereal promotion. Unfortunately, the tiny parcels were never formally registered and in 1965 the Canadian government repossessed the land for nonpayment of $37.20 in property taxes.

Though I was unable to develop my square inches of the Yukon, I went ahead and planned my Alaskan sojourn that included meandering about the lower 48 states and much of Canada.

The trip began in early May when we entered Manitoba at Pembina, N.D., where Canadian border patrol officers are friendly but inquisitive about firearms, drugs and fruits and vegetables. Yes, even an uneaten orange can be confiscated.

Sprinkled with farmland and mountain ranges, Canada’s highways presented breathtaking scenery as we drove across Saskatchewan to Edmonton, Alberta, and up Highway 43 to Dawson Creek, British Columbia. From there we took the Alaska Highway to Watson Lake in southeastern Yukon, then to Whitehorse and, finally, to Fairbanks. Our other stops included Anchorage, Tok and the Kenai Peninsula town of Homer.

Dawson Creek is the official beginning of the Alaska Highway. It took just eight months to build the original 1,528-mile road from Dawson Creek to what would, in 1959, become our 49th state.

We arrived at the Mile 0 RV Park in Dawson Creek, where an earlier snowfall had melted in the brisk air that demanded sweaters and jackets. Here we found full hookups and pull-through sites, and learned the park was located next to Walter Wright Pioneer Village and about two miles from the Dawson Creek Visitor Center. Also nearby are the North Alberta Railways Park and its Railway Station Museum, the Alaska Highway House, and the Dawson Creek Art Gallery that was fashioned from an old grain elevator.

Mountain goats are a common sight along the Alaska Highway

About 300 miles north of Dawson Creek we discovered Fort Nelson, a city known as the gateway to the Northern Rocky Mountains and the Muskwa-Kechika Management Area. At about the size of Ireland, Muskwa-Kechika is considered a globally significant area of wilderness, wildlife and culture. While in Fort Nelson we explored the city’s heritage museum, a collection of antique machinery, vehicles, furniture, tools, Alaska Highway artifacts and a stuffed white moose.

As we journeyed north, we discovered Toad River Lodge and RV Park at Mile 422 in Toad River, B.C. We were lucky to snag a lakeside site with full hookups, and we settled in to absorb the pastoral beauty and stay awake for a memorable sunset.

The next leg of the expedition was crammed with mountain peaks, rushing waters and entry into Canada’s fabled Yukon Territory. Critters lurk at nearly every turn. Wild buffalo in the middle of the road greeted us more than once. So did mountain goats and bears that seemed accustomed to humans gathering on their turf to take pictures, in awe of their very presence.

Worth a stop is Watson Lake’s Signpost Forest at the north end of town. Started in 1942 by U.S. Army soldier Carl K. Lindley, who placed a sign pointing the way and stating the mileage to his hometown of Danville, Ill., it now contains more than 70,000 visitor-donated signs.

The campsites within city limits are little more than dusty lots with few amenities. Drive west approximately 20 minutes to the Baby Nugget RV Park at Mile 650 and find full hookups, an on-site restaurant, RV wash and laundry facilities. You’ll have to dump wastewater at a community septic tank.

Next up was Whitehorse in the Yukon. Upon entering, we thought we’d discovered a lost city of sidewalks, shopping centers and all the conveniences of modern living. With a year-round population of roughly 26,000, Whitehorse began as a tent-and-cabin town to meet the demands of heavy rail and riverboat traffic at the turn of the last century. A second population surge came in 1942 with the construction of the Alaska Highway. In 1953, Yukon’s capital moved to Whitehorse from Dawson City.

We settled down for three days at Hi Country RV Park, at the main exit to downtown Whitehorse.

Whitehorse is a refreshing reprieve from the hardscrabble small towns and villages that dot the Alaska Highway. The downtown district is crammed with shops and boutiques, restaurants and museums. The Whitehorse Tourism and Culture Center, 100 Hanson St., offers free RV parking while you tour this fascinating city.

We spent some time exploring the MacBride Museum of Yukon History, where visitors can follow the Yukon River through the history of Whitehorse in the “Gold to Government” exhibit and view numerous artifacts, photographs and wildlife displays. Outside is Sam McGee’s 1899 cabin, home of the man immortalized in Robert Service’s famous poem, “The Cremation of Sam McGee.”

Onward to Alaska and Tok, the drive is especially scenic. Most spectacular is Kluane National Park and Reserve with its incredible glacier and ice field landscapes. Surrounding mountains were still snow-capped in July and Kluane Lake was frozen solid in spots. Full-service campgrounds are minimal, leaving only boondocking as an alternative.

Tok bills itself as the “Gateway to Alaska” and was formed in 1942 as a camp for Alaska Highway workers. Located here is the Burnt Paw Gift Shop, the Mooseberry Inn and other businesses that advertise everything from fine art to cookbooks that detail recipes for moose nose jelly, bear stew and roasted beaver.

A popular diversion from mid-September to April is viewing the northern lights. – Brian Adams

After 5,111 miles behind the wheel, our next destination of Fairbanks was a restful stop. We camped at the River’s Edge RV Park along the Chena River, and though it’s a bit pricey it was worth the amenities that include 30- and 50-amp electricity, large sites, cable TV and Wi-Fi.

A popular diversion from mid-September to April is viewing the northern lights. But watch out for the roughly 500 moose that live in and around Fairbanks, and the other 20,000 that claim the vast area from Ester to North Pole to Fox.

Find information on Fairbanks’ historic downtown district at the Morris Thompson Cultural and Visitor’s Center, and be sure to visit the Georgeson Botanical Garden for some high latitude horticulture courtesy of the University of Alaska Fairbanks.

Next we made our way south along the George Parks Highway, a panorama of impressive mountains and glaciers. The enormous peaks inspire awe, as does the drive along the Seward Highway National Scenic Byway to the Kenai Peninsula.

Seward, located near the Harding Icefield, Kenai Fjords National Park and Resurrection Bay, features restaurants, art galleries and shops on the waterfront and in the historic district. The city is home to the Alaska Sealife Center, the state’s only pubic aquarium that boasts animal encounters, educational exhibits and fascinating wildlife, including a 2,000-pound Steller sea lion.

The Seward Chamber of Commerce distributes a free walking map of the city that details a route beginning at the Port of Steward and ending at the downtown waterfront. Points of interest along the way include Main Street, the Founder’s Monument, a former church turned into a coffeehouse, and the once-notorious Alley B, a transformed one-time World War II-era red light district.

After three days in Seward it was on to Homer, 173 miles south at the very end of the Kenai Peninsula on Kachemak Bay. The city is home to the Alaska Maritime National Wildlife Refuge and the Kachemak Bay Research Reserve. It is the springboard for air and water travel to surrounding remote locations, including glaciers and volcanoes.

The harbor on Homer Spit contains hundreds of watercraft, including the commercial crabbing ship, Time Bandit, of Discovery Channel and “Deadliest Catch” fame This finger of land is also home to restaurants, galleries and the Alaska Ferry System.

A two-mile stroll around town is worth the effort. We walked out of one shop only to be greeted by a wild moose and her calves munching on grass in a nearby lot.

Ocean View RV Park in Homer, Alaska, is near the water and within a short walking distance to town.

When you’re tired of walking, use the Homer Trolley that traverses the town. For just $12 for adults and $10 for seniors, you can ride in comfort while a knowledgeable driver gives an ongoing dialogue about the area’s history.

We stayed in Homer for five days before embarking on the long drive back to Florida. Though I wasn’t able to visit my few square inches of property near Dawson City, this RV exploration brought natural beauty and excitement at every turn.

It’s not unusual to see a moose walk across the local roads.