A Glittering Nugget in Gold Country 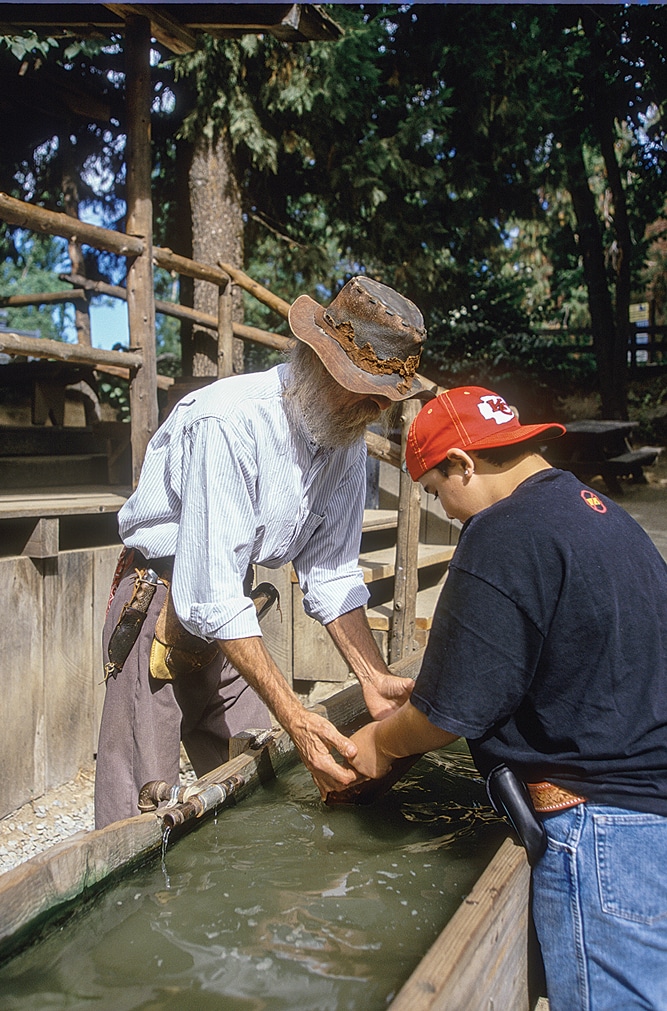 History Comes to Life in the 19th-Century Mining Town of Columbia, Where the Sights and Smells of the Old West Can Still Be Experienced

I’m feeling silly, having paid good money to slosh a pile of wet gravel about in a pie tin with the idea of striking it rich. My eyes are straining as my hopes rise and fall with each imagined glimpse of a gold flake. If nothing more, I’m gaining valuable insight into the fervor and frustration that must have gone hand in hand during the great California Gold Rush.
I’ll gain even further insight into the largest peacetime migration in American history during my day-and-a-half visit to Columbia State Historic Park, off Highway 49 near Sonora, some three hours east of San Francisco.
Gold was discovered here in 1850, little more than a year after the fabled strike at Sutter’s Mill set the big rush in motion. It all came about when Dr. Thaddeus Hildreth, with his brother, George, and a handful of other prospectors, made camp here. They found gold and word was soon out about the big discovery at Hildreth’s Diggings. Its original name was soon changed to American Camp and from that to Columbia as the population spiraled from a few hundred prospectors to 6,000 frenzied souls in a matter of weeks, making it the state’s second most populous community. By 1854, Columbia boasted four banks, eight hotels and nearly 50 saloons.

Much of the old mining center has been preserved — more than 30 buildings in all — providing a remarkable window on life in the Mother Lode during the mid-19th century. Wandering the streets of this 12-square-block time-capsule town — where the only vehicular traffic is a Wells Fargo stagecoach that totes visitors around for a small fee — you’ll pass the miners’ boarding house, a dance hall and an 1861 schoolhouse. There’s a newspaper office, livery stable, several saloons and a Chinese temple and herb shop. And, of course, an apothecary and a dentist’s office with fiendish looking instruments that bear a close resemblance to tools seen in the town’s blacksmith shop.
By 1860, when the easily mined Placer gold had played out, Columbia began to decline, but not before producing nearly a billion dollars worth of gold — at today’s value. Although the town suffered a couple of fires through the years, along with vandalism and wear and tear from the elements, Columbia survived and was never completely deserted, retaining much of the same appearance as when miners thronged its streets. Recognizing an opportunity to preserve a typical gold-rush town as an example of one of the most colorful eras in American history, the California State Legislature in 1945 created Columbia State Historic Park. The town’s historic importance was further recognized when it was designated a National Historic Landmark in 1961.
Columbia Museum occupies the sturdy brick Knapp building, exhibiting different mining techniques and revealing much about the lives of miners willing to endure the hardships involved in the difficult and sometimes dangerous work of extracting nuggets from icy Sierra streams. For every lucky miner more than a hundred failed. The cost of living was astronomical: a loaf of bread going for $5, a denim shirt for $50 and an ordinary shovel for $100. Truth is, the shopkeepers of Columbia — eventual millionaires Mark Hopkins and Leland Stanford, investors who formed the Central Pacific Railroad, among them — gained the greatest fortunes here selling food, liquor, hardware and dry goods.

The interior of the Wells Fargo Express office

I’d camped the evening of my arrival at the nearby 49er RV Ranch with plans to spend a day in Columbia — but as evening approached, I realized there was much more I wanted to see and do, so I decided to take a room at the 1865 City Hotel.
A pair of Columbia’s old hostelries — the City Hotel and its sister the Fallon Hotel — have been brought back to life, authentically restored as 19th-century country inns and decorated to the hilt with Victorian antiques, custom-crafted wall coverings and period lithographs. The charming 10-room City Hotel where I landed features an extraordinary gourmet restaurant, ably operated by park concessionaire Briggs Hospitality. There’s a bar as well, dubbed the What Cheer Saloon, that serves what those in the know say is the best lunch in town. Room rates are reasonable enough, ranging from $115.50 to $148.50 based on double occupancy. Briggs also operates a group of nicely furnished cottages, ideal for large families/groups or for extended stays.
While I certainly didn’t get rich panning for gold, I did strike a bonanza that evening at City Hotel’s restaurant, ordering up a filet of poached Pacific salmon, artfully garnished with pickled rhubarb and a lemon beurre blanc (a rich, tangy sauce) and served with butternut squash risotto. Not exactly mining camp vittles, mind you. Later I capped off a wonderfully informative and entertaining day by attending a performance of the Sierra Repertory Theatre at historic Fallon House Theatre.

The printing office where the Columbia Gazette, the most important of the town’s several newspapers, was first published in the fall of 1852

Both hotels remain as faithful to period décor as possible while implementing modern conveniences such as indoor plumbing, heating and air conditioning. Blessedly, however, there are no phones or TVs. Each room has a half-bath, and a shower basket is provided for the trip down the hall to the shared shower room. An included continental breakfast buffet is available for guests of both hotels.
Columbia’s streets are lined with a variety of shops and boutiques, many specializing in 19th-century goods. Restaurants, saloons, ice-cream parlors, candy stores and a tea house stand ready to quench a thirst, satisfy a sweet tooth and fill your appetite. Be sure to try a cold bottle of locally made sarsaparilla to get a taste of the Old West.
Park staff and volunteers with the Friends of Columbia State Historic Park host a busy year-round roster of living history programs. During Gold Rush Days, held the first and second Saturday of each month from 1 to 4 p.m., park docents and volunteers in period clothing lead special programs and various hands-on activities.
“Columbia Diggins,” staged annually (May 29 to June 1 for 2014), is a major re-enactment of things as they were back in 1852 at the rough and raucous tent city then known as Hildreth’s Diggins. No doubt, this is the park’s crowning event, drawn from painstaking research into the details of daily life in tent towns that popped up everywhere in the Mother Lode during the early days of the great California Gold Rush.
“We can’t know exactly how life was like for those early residents,” says Amber Cantisano, the park’s interpreter who coordinates the event, “but we spend a lot of time reading their journals, newspapers and studying archaeological remains to cobble together a fairly accurate picture of the times.”
During the four-day event, visitors can roam through the tent town, enjoy entertainment at the theater, step into the saloon and order a sarsaparilla, or browse in the authentically re-created Brown’s Mercantile. Bakers produce bread in a stone and brick oven, and docents demonstrate a variety of early mining techniques.
“There is really nothing like it anywhere else,” says Cantisano, “it’s the closest thing to time travel you’ll find. It is both amazing and educational.”
Conveniently located off Highway 49, reaching Columbia is an easy and scenic drive that neighbors other historic towns in the area’s foothills, including Sonora, Angels Camp and Jamestown, making it a popular destination for day-trippers and weekenders alike. Columbia State Historic Park is also easy on the budget with free admission, free parking (with plenty of room for RVs) and free docent-guided tours of the town. You can even bowl for free in an antique bowling alley next to the museum.

The Jack Douglass Saloon was one of nearly 50 watering holes that prospered during Columbia’s Gold Rush heyday.

The state park is open daily, year-round. It is a real town and never actually closes, although some businesses do close on major holidays. Most businesses are open from 10 a.m. to 5 p.m., but restaurants, hotels, saloons and some other establishments have longer hours. The Columbia Museum is open everyday from 10 a.m. to 4 p.m. except on Thanksgiving and Christmas.
RV campers will find that Columbia’s history isn’t limited to the state park. For example, when you tie up at the 49er RV Ranch you’ll be experiencing the Gold Country’s oldest and arguably best campground. The ranch has been providing camping since 1852 when it began serving the influx of 49ers searching for Columbia’s bonanza of Placer gold. Today’s modern amenities, however, which include full hookups with 30/50 amp electric, water/sewer, clean showers, 30-channel cable TV, free Wi-Fi service and a fully stocked camp store, make for a whole lot more comfort than the early miners might have enjoyed.

Columbia’s fire department and drugstore are among the town’s more than 30 surviving 19th-century buildings.