A Day in Nashville: Country Music History and Home Cooking 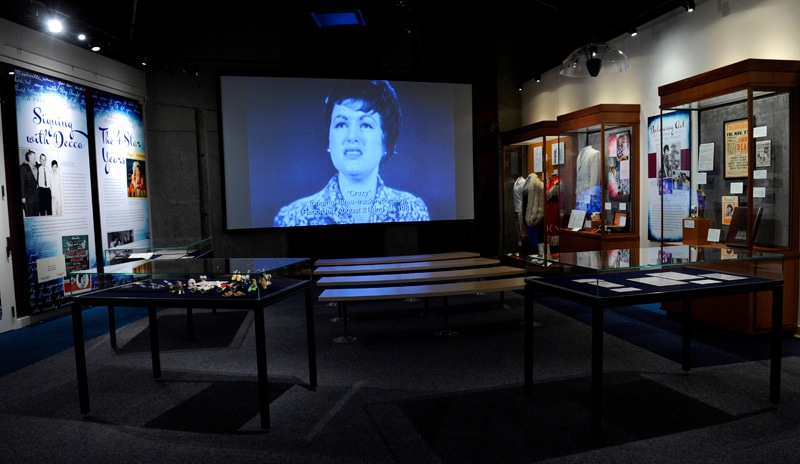 The music of Nashville, Tenn.,  isn’t on everyone’s playlist, but the Country Music Hall of Fame and Museum should be on everyone’s bucket list.

The sounds of the Music City didn’t just shape American music history, but also breathed life into rock and roll, bluegrass and all manners of Americana music. Without country, Elvis would be just a head of hair and some taboo gyrations, Earl Scruggs would be just a farmer and Taylor Swift would be just another model with boy problems.

To see how the genre took shape could be a pedantic journey to the library, but the Country Music Hall of Fame and Museum turns country relics and historic tunes into an enthralling, musical walkabout. After leaving the permanent “Sing Me Back Home” exhibit, visitors have a solid foundation about the history of country music. The museum, however, has so much more to offer.

Part of the Patsy Cline Exhibit.

Rotating exhibits examine country greats such as Patsy Cline, or musical hotbeds like Bakersfield and the big sounds of Texas country music.  The exhibits also look at current pop-country stars.  The Taylor Swift exhibit, for example, features dozens of Swift’s costumes and sets used in her world tours.  Visitors should peruse the museum calendar before stopping in to see what new exhibits have arrived and when they are being replaced.

Jim Reeves in Studio B.

The museum also includes guided tours of Studio B, where more than 35,000 songs were recorded and produced, including more than 200 Elvis songs.  Tours run every day between 10:30 a.m. and 2:30 p.m. The guided tours take visitors through the entire studio where country greats, like the Everly Brothers and Dolly Parton, crafted some of their most famous tunes.  Anyone looking to visit the studio should get their special museum tickets in advance as the tours are extremely popular.

Adult tickets for the Country Music Hall of Fame and Museum run $22 and $33 with the option Studio B tour.

The only thing better than a day among that down-home music, is some down-home cooking for dinner.

Any traveler rambling through the Southern states has likely had a few helpings of fried chicken and barbecue. Unless you packed a few generations of Southern belles in the back of your RV, however, a classic Southern family meal is tough to find.

A small glimpse at the delicious spread at Monell’s.

Mornell’s Restaurant does Southern cooking right: heaping bowls of okra and collard greens, piles of fried chicken and a bevy of biscuits all shared among friends new and old.

Instead of sitting at a small private table, Mornell’s seats you with perfect strangers at long wooden tables.  Once 12 people find their chairs, the parade of delectable Southern food arrives in big bowls.  Sure, the food is famous, but the real attraction is making new friends and sharing stories over a steaming plate of the day’s specialty.

A meal costs between $12 and $17 depending on the day and time. The main course also varies between Southern classics like fried catfish, pork chops and chicken and dumplings.  Breakfast including biscuits and gravy, grits and fried apples is also served on weekends.

The restaurant is highly rated for its novel approach to dinnertime as well as friendly and timely service. Any traveler looking to sit down and dig in around the holidays should also check out their mouthwatering themed dinners.

After all that southern love (and piles of rich food) a nap will likely be in order.  The Nashville Shores RV Park is highly rated and features Good Sam discounts.  Situated just 20 minutes from downtown Nashville, the park features all the amenities including a pool and water park to cool off after a day of traipsing around Music City.

If you’re looking for more fun in the area, head over to our sister site, Trailer Life, and see how to spend another day in Nashville.