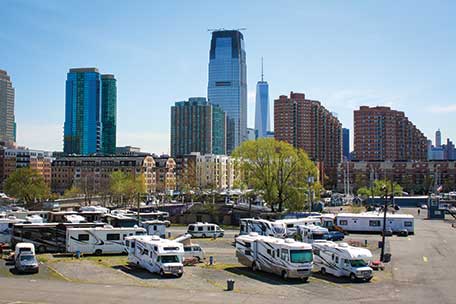 No need to miss out on the big-city attractions, entertainment, restaurants and more. These nine RV parks are located right in the heart of the action.

Nothing tops the ease and enjoyment of tooling down a leafy country lane with nary another vehicle in sight — or tying up in a quiet, out-of-the-way campground far from the lights and sounds of a city.

For most of us, however, there comes a time when we feel the urge to heed the siren call of the city — perhaps to visit a museum, savor a fancy dinner out or take in some nightlife. It also could just be the simple need for goods or services that necessitate a drive into a busy metropolis — and lest you have a dinghy in tow, you’ll have no choice but to motor on.

Taking your motorhome into the congested maze of a major metro area can be daunting, but with a bit of extra caution it’s not all that difficult. Just think about those 18-wheelers that routinely roll through urban centers.

If, for whatever reason, there’s an urban adventure on your agenda, don’t overlook the possibility of finding an RV park in a downtown location handy to your desired destination. There are a number of such parks that offer big-city camping in lieu of parking on the perimeter, where you’d have to deal with the hassle of hooking up with public transportation — or paying a hefty price for a taxi.

Here, for example, are nine RV parks positioned well within the bounds of major metropolitan areas across the country.

Chicago, Illinois — McCormick Place Marshalling Yard isn’t exactly an RV park. As its name implies, it’s a huge parking lot and staging area for trucks servicing McCormick Place, one of the nation’s largest and busiest exhibition halls and conference centers. For some inexplicable reason, RVs of any size and description are invited to park here, too — at a 24-hour rate that is far less than what you would pay to park an automobile anywhere in the Windy City. It is not a pretty scene, and there are no hookups or even restrooms, but it’s a gated facility with around-the-clock security and excellent connections to public transportation right outside the gate. Call ahead for more information and current rates, 312-808-3138.

Jersey City, New Jersey — Liberty Harbor RV Park is a one-of-a-kind campground where you can tie up at the very doorstep of the nation’s largest city. In fact, you can see the New York skyline, Statue of Liberty and Ellis Island from your campsite — and within 15 minutes you can be in Manhattan, by way of bus, ferry or subway. This is a no-frills RV park, devoid of any greenery or deluxe amenities, but you do get a concrete slab with water and electricity and there are restrooms/showers and a laundry room. A bonus for summer visitors is the lively al fresco Surf City Megabar and Restaurant. The campground is situated just off Interstate 78 on the Jersey side of Upper New York Bay, which makes it easy to reach Liberty Harbor — and the Big Apple, once you’ve settled in to the RV park. You can take a tour bus into Manhattan right from the park, or hop onboard a NY Waterway Ferry at Liberty Harbor Marina for a quick cruise over to Pier 11 at the foot of Wall Street. Another option for easy access to the city is to walk five blocks to the Grove Street PATH subway station and catch a ride to 33rd Street and 6th Avenue or to the World Trade Center site in lower Manhattan for a look at the 9/11 Memorial and Museum. Liberty Harbor Marina & RV Park, 201-516-7500, www.libertyharborrv.com 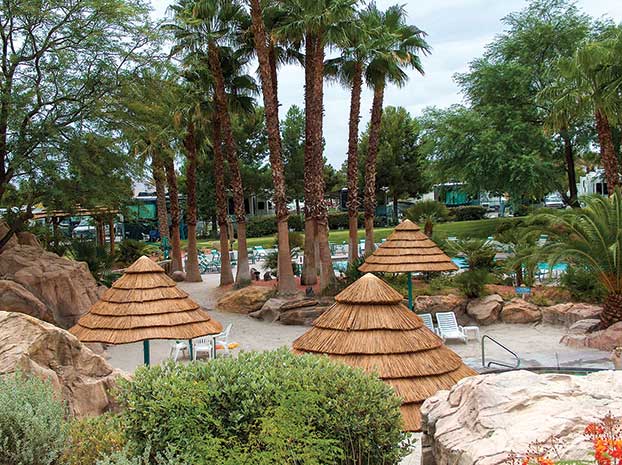 Las Vegas, Nevada — Oasis Las Vegas RV Resort is positioned just off the Las Vegas Strip (Las Vegas Boulevard), and a mere 3 miles south of its intersection with Tropicana Boulevard — the setting for MGM Grand and other resort casinos. With the recent closing of the KOA campground that was adjacent to Circus Circus (now relocated to Sam’s Town on distant Boulder Highway), Oasis is as close to the Sin City action as you can get. With more than 700 sites, you’ll find space for motorhomes of any size and all of the mega-park amenities you could hope for, including family and adult pools, a spa and fitness center, an 18-hole putting course with natural grass greens, a restaurant and convenience store. Oasis Las Vegas RV Resort, 800-566-4707, www.oasislasvegasrvresort.com 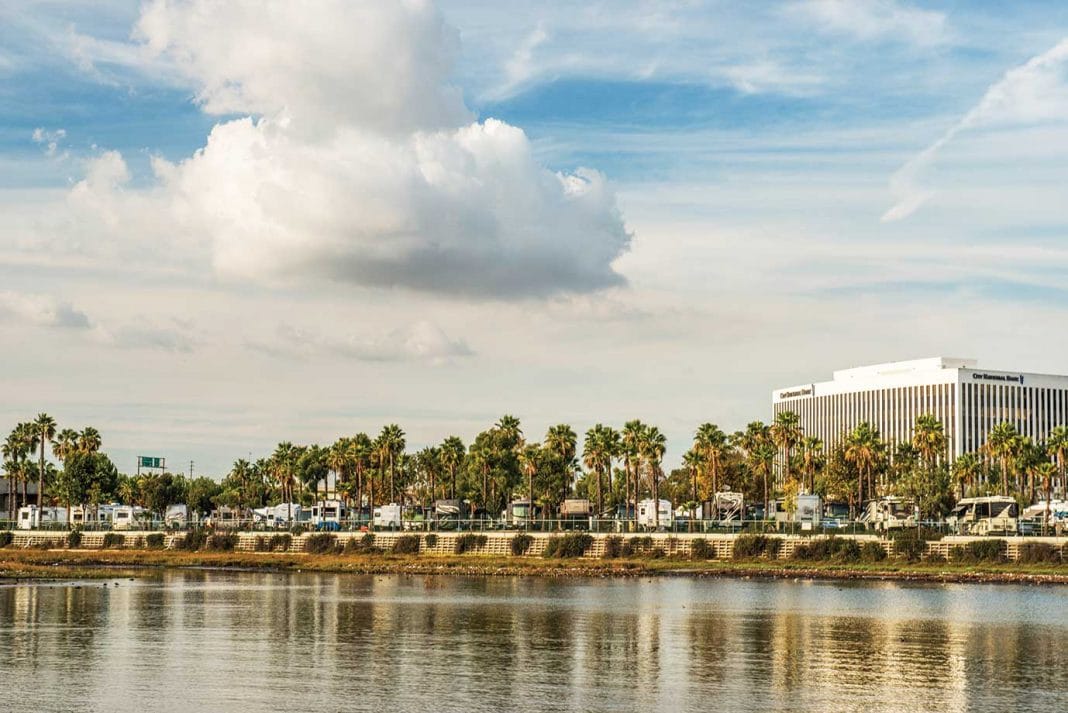 Long Beach, California — Golden Shore RV Resort is a cinch to reach, right at the end of the 710 freeway in downtown Long Beach. It’s literally within sight of such popular Long Beach attractions as the Pike at Rainbow Harbor (a spectacular dining, retail and entertainment center), Aquarium of the Pacific, the Queen Mary and Long Beach Museum of Art. The campground offers all of the niceties necessary for comfort and convenience, including free Internet, a clubroom and kitchen, picnic area with barbecue, convenience store, pool and spa, horseshoe pits and shuffleboard. Be sure to make reservations early if you want a campsite during the annual Toyota Grand Prix of Long Beach, scheduled for April 17-19, 2015. Golden Shore RV Resort, 800-668-3581, www.goldenshorerv.com 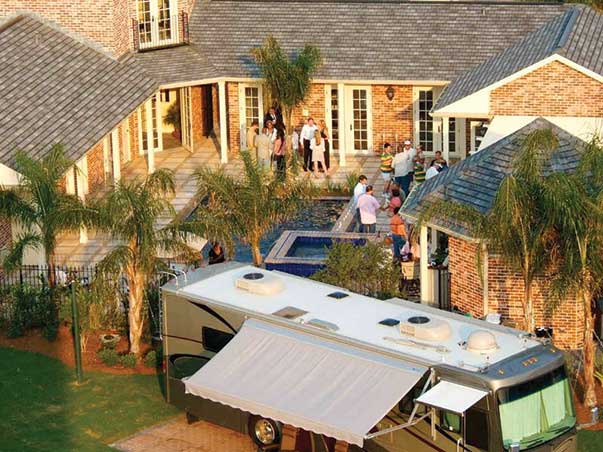 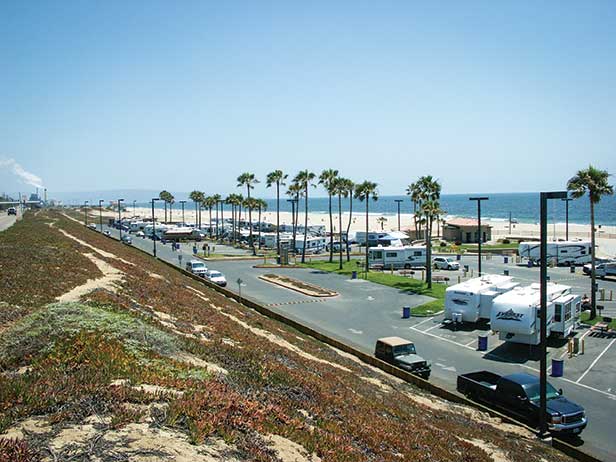 Playa del Rey, California — Dockweiler Beach RV Park is the only beachfront RV campground in Los Angeles County. Easily accessible off the 105 freeway at the Imperial Highway exit, it’s located close to the upscale shops and restaurants of Marina del Rey and Santa Monica — and Venice with its outrageous beach scene and 16 miles of canals. The park is maintained and operated by the Los Angeles County Department of Beaches & Harbors. While it may lack some of the deluxe amenities of a privately owned campground, it has all the necessary hookups — and what the heck — you’re camping right on the sand at a fraction of the cost of a hotel. Dockweiler RV Park, 800-950-7275, https://beaches.lacounty.gov/dockweiler-rv-park/

San Antonio, Texas — Travelers World RV Resort posits its guests closer than any other park to San Antonio’s landmarks and attractions. Step out of your coach and it’s only a three-minute stroll to River Walk, or hop a city bus right out in front of the RV park and in five minutes you’ll be admiring the historic Alamo or circulating among the shops, galleries and restaurants of La Villita. Trees shade most of the campground’s 165 sites, all with full hookups, including complimentary cable TV and Internet. It’s a people-friendly campground with a clubhouse, recreation center (the scene of potlucks, dances and exercise classes), a pool and playground — and it is pet-friendly, too, with a dog-walking area. Travelers World, 210-532-8310, www.travelersworldrvresort.com

San Diego, California — Campland on the Bay boasts a scenic setting on the sandy shores of Mission Bay where it has served as a family vacation favorite since 1969. Campland is so close to Sea World that you can watch the theme park’s fireworks display from your site. It’s within easy striking distance of other top San Diego attractions as well, including the Gaslamp Quarter, Balboa Park and the incomparable San Diego Zoo. The campground is loaded with amenities, including a marina where you can rent an assortment of watercraft, a restaurant, a market featuring everything from food and beverages to housewares and RV supplies, swimming pools and Jacuzzis, and the recently opened Huff N’ Buff Gym with an impressive lineup of state-of-the-art exercise equipment. Campland on the Bay, 800-422-9386, www.campland.com

St. Louis, Missouri — St. Louis RV Park is a bare-bones little campground that probably won’t excite you with its amenities, but what it does have in spades is an enviable location, right in the middle of one of the country’s most vibrant and visitor-friendly cities. Camp here and you’re close to myriad attractions, including the landmark 630-foot-high Gateway Arch, where you can ride to the top for a stunning view of the city’s Mississippi River waterfront. Or you can stroll through nearby Forest Park, site of the 1904 World’s Fair and one of the country’s largest and most beautiful urban parks. City Museum is a must if you have youngsters in tow. It’s an architectural marvel, brimming with interactive exhibits sure to excite kids of all ages. And, if your timing is right, you could catch a game at Busch Stadium, the downtown home of the baseball Cardinals. Night owls will find plenty of action too, dining and dancing the evening away on Washington Avenue or at Laclede’s Landing. St. Louis RV Park, 314-241-3330, www.stlouisrvpark.com