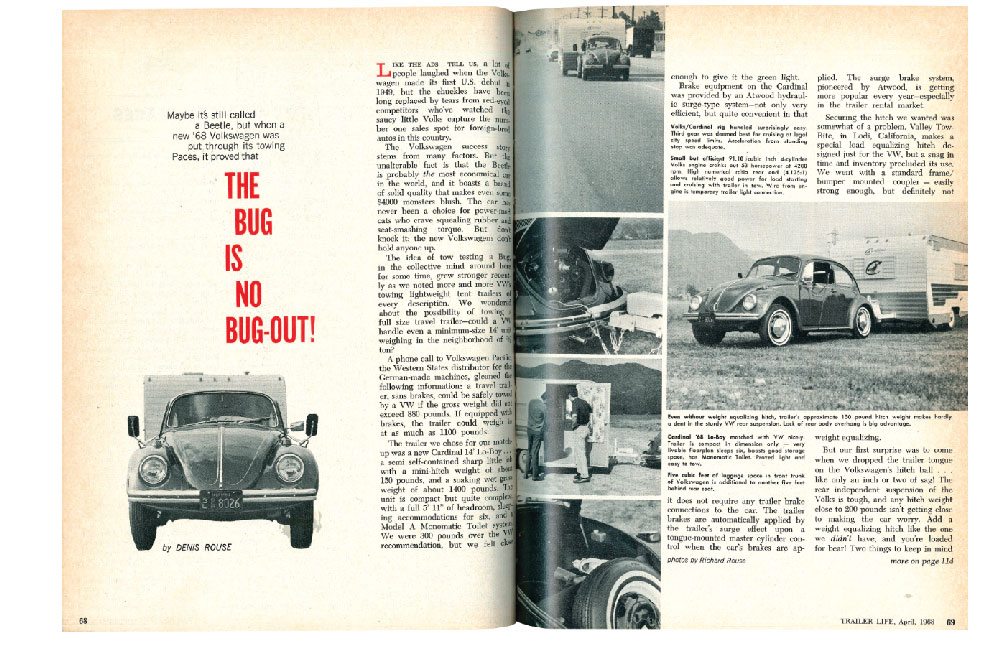 In the late 1960s, Trailer Life was outta sight

After turning 25 in 1966, Trailer Life rolled into its second quarter-century with steadily increasing pages that peaked at 200 in the March 1968 issue. The thriving RV industry, and the explosive growth of motorhome ownership in particular, inspired Publisher Art Rouse to launch a new magazine devoted exclusively to motorized RVs. Named Motorhome Life when it debuted in 1968, Trailer Life’s sibling is now simply MotorHome.

Not long after that, the abbreviation “RV” made its first appearance in Trailer Life, replacing “RecVs” from earlier in the decade, and “trailer coaches” and “house cars” from the 1940s and ’50s. As hairstyles got longer and skirts inched shorter, the era’s game-changing youth culture crept naturally into the magazine, with Rouse’s three children all coming of age and joining the staff, along with a team of enthusiastic RV writers eager to share their passion.

Can a VW Beetle tow a 14-foot Cardinal Lo-Boy? Yes, according to the April 1968 Trailer Life: “The rig handled surprisingly easily.”

The possibilities seemed endless, and each issue featured more groundbreaking RVs, including a Kenskill trailer with a first-generation slideout, called a “tip-out,” and one of the first fifth-wheels (“It’s a semi! It’s a trailer! It’s a Hy-Lander!”). Trailer Life tested not one but three amphibious RVs in the late ’60s (Trail or Float, Trail-R-Float and the Creighton Gull), and a fourth (Amphicraft) ran full-page ads.

By the end of the decade, all of the domestic automakers offered trailer-towing packages, and sedans and station wagons were the go-to tow vehicles. From the Buick Electra to the Pontiac Grand Prix, Trailer Life put them through their paces hauling trailers at Southern California’s now-defunct Riverside Raceway. With the U.S. market for foreign cars about to take off, the staff also hitched up imports, among them the Japanese Datsun 510 Wagon, the German Opel Kadett and the quintessential ’60s ride, the Volkswagen Beetle.

Automakers got in on the RV action, too, with Dodge Motor Homes (manufactured by Travco and marketed by Chrysler) and Ford truck campers. The late-’60s camping package on F-Series trucks came with heavy-duty cooling, a larger alternator and prewiring for campers. Ford even offered a camper that fit the bed of the Ranchero, a coupe-utility pickup on a station-wagon platform.

Now that America’s second largest car company is back in the RV business with Ford-branded campers, toy haulers and travel trailers (built by Livin’ Lite), what goes around, comes around. How groovy is that?