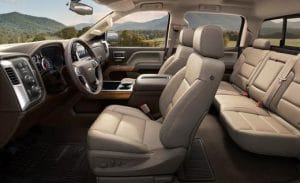 Chevrolet has upped its game with the updated 2015 Silverado 2500 pickup. The new truck claims “best-in-class payload and conventional towing” for the new HD. The HD also gets stiffer construction, triple-sealed doors inset into the body for reduced wind noise, and an upgraded interior.

A 6.0-liter gasoline V-8 with six-speed automatic transmission is rated 360 horsepower and 380 lb-ft of torque. There’s also a bi-fuel option that can run on compressed natural gas, and has hardened valves and valve seats for durability. The optional 6.6-liter Duramax diesel is rated at 397 horsepower and 765 lb-ft of torque. It’s backed up by a six-speed Allison 1000 automatic transmission.

Various amenities such as USB, SD card, and power ports are available. In addition,  the MyLink infotainment system is standard on all models except the base work truck.

An optional trailer brake controller is built in on the left of the steering wheel and the tow/haul button, which also operates the Auto Grade Braking transmission control is on the end of the shifter. With Duramax diesel models the exhaust brake is controlled by a dash button.

Silverado’s payload limit was raised from 7222 pounds to 7374 pounds which makes it  class leading. Conventional hitch trailers up to 19,600 pounds can now be towed with an available factory hitch, a 1600 pound increase over last year’s model, plus it’s also class-leading. Silverado’s maximum fifth-wheel towing rating is now 23,200 pounds, up from 22,500.