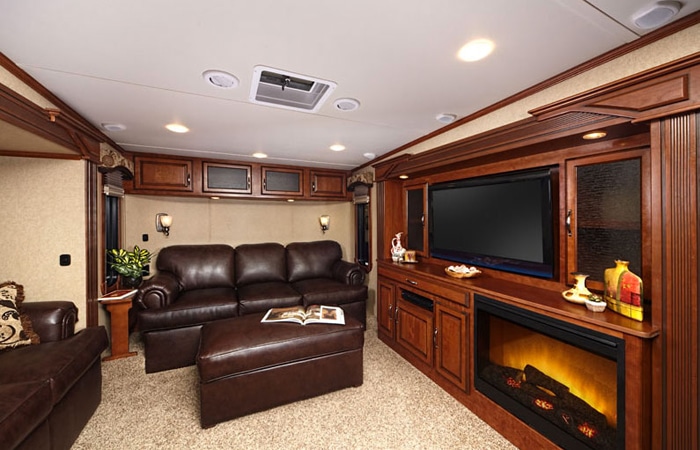 When an RV manufacturer establishes a new division — or even a new line — it isn’t exactly reinventing the wheel. The general shape and operation of travel trailers and fifth-wheels has been established for decades. Even interior square footage is uniform: Under standards established by the Recreation Vehicle Industry Association, trailers can build out to a maximum of 400 square feet of floor space, while fifth-wheels are allowed to push that by another 30 square feet.

It’s what they do with that interior space that makes all the difference in the world.

Redwood RV is a fairly young company, established in late 2010 to give its parent company, Thor, a division capable of building upscale residential-style fifth-wheels for full-timers. With barely a year of manufacturing under its belt, the company has grown to offer eight floorplans, ranging from 34 to 40 feet. By far, the most interesting of these is Redwood’s model 36FL — its only floorplan offering a front lounge in the upper deck.

Front lounges aren’t new to the marketplace, by any means — but Redwood offers a few twists others don’t, including a forward ceiling height of 6 feet 7 inches that slopes down to a still-comfortable 6 feet 2 inches at the front cap. “We managed the extra headroom by mounting the second air-conditioning unit (an option) mid-coach,” said Paul Craven, a Redwood regional sales manager. “That not only allowed us to raise the ceiling but also to reduce its overall height, and making it quieter in the forward section.”

This model easily entertains six with plenty of comfy furniture, a fireplace and TV.

And, while Redwood didn’t extend the length of the upper deck — a decision that provides campers with more kitchen space on the main floor — there’s still ample room for a sofa in the streetside slideout and either paired stuffed easy chairs with matching ottomans (standard) or a second sofa in the front cap. The curbside slideout, one of five in the trailer, is home to a 40-inch flat-screen TV, pullout executive desk with storage and a fireplace.

All the furnishings are inner-sprung residential-quality pieces by Williamsburg Furniture. In building its fifth-wheels, Redwood subscribes to the “6-4-2 Baby Boomer code” — entertain six, feed four, sleep two. That’s why the units have freestanding dinettes and, until recently, Redwood didn’t even offer a sofa-bed option.

The bathroom, like the rest of the unit, strives for a homey, open feeling.

On the main floor, the 36FL is awash in high-end solid-surface countertops and cherry solid hardwood cabinetry. The rich cherry finish, which includes door inserts for the 12-cubic-foot refrigerator, is the only wood tone available, although the unit does offer a choice of three interior decors. In keeping with the full-timing focus, the galley includes a host of “homey” touches, from a plate-storage drawer and concealed 13-gallon trash bin to a large pantry and whole-house water filtration system.

A real door with glass insert — not a flimsy pocket door — separates the rear of the unit from the galley. Behind it, the streetside bath features more cherry cabinetry and an enclosed one-piece shower surround with glass doors. There are additional cabinets in the rear master suite. The entire curbside wall is covered with them, along with a second flat-screen TV, and the pedestal bed incorporates two huge drawers on each side. “We found that most people really didn’t like having to pick up the mattress to access storage,” Craven noted. Opposite the bath is a second entry door; all Redwood fifth-wheels have two entries. The front one, in fact, can be swapped out for a sliding glass patio door.

Designed as a four-seasons coach, the Redwood employs insulation with varying R-values in the deck floor, ceiling, front and rear caps, side walls and slideouts. Even the exterior storage incorporates insulated walls and baggage doors, and water lines are run inside the heated floor next to the furnace ducts.

The kitchen accommodates four for dinner with its freestanding dinette and huge galley.

Interestingly, while Redwood says that nearly 45 percent of its units are ordered with full-body paint (a $9,500 option), the “standard” aesthetics on the fiver, which include color gelcoated front and rear caps, give the Redwood the appearance of a partial-paint exterior without added cost.

From an owner’s perspective, though, perhaps the Redwood’s best feature is its exclusive Falcon Integrated Technology (FIT) platform. Developed by Lippert Components, FIT incorporates the frame, axles, suspension, six-point hydraulic jacks, rear hitch, front pin box, even the steps and slide-room mechanisms. If problems arise, an owner won’t get shuttled between companies; since all the parts were sourced to a single supplier, problems can begin their resolve with a single phone call.