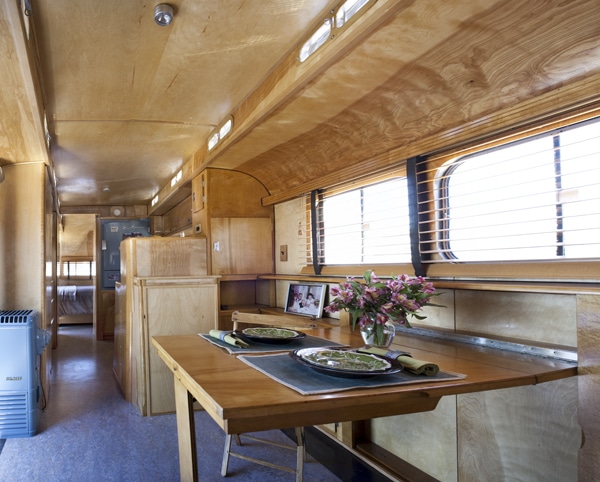 Westwoods were only built by Westcraft during the period from 1946 through 1948, and designs for each of these three model years were different and unique. The earlier Westwood series had a plain “bread loaf” appearance. The Westcraft company discontinued the Westwood models and began focusing exclusively on the “Pullman” roof Westcraft models by 1949.

Did someone say diner car?

Both types were top-quality trailers that used aircraft-construction methods with aluminum frame ribs, but they used heavier-gauge aluminum skin panels than many contemporary brands. All Westcraft models had painted exteriors, many in handsome two-tones. During the late 1940s and early ’50s, Westcraft trailers were considered to be among the highest quality trailers on the market. Thanks to their excellent construction, they rarely leaked at the outer seams, vents or windows, areas where many other trailers had problems. Unfortunately, production had stopped by 1955.

The 1948 Westcraft Sequoia featured here is owned by Justin and Anna Scribner of Bend, Oregon. Anna told us: “We found this trailer just outside of Vancouver, Washington. It was in pretty rough shape, but we instantly fell in love with it.”

To return it to its former glory, the exterior was stripped of its many coats of latex house paint, polished, etched primed and professionally painted. All windows were removed, all glass was replaced and window frames were all stripped and either polished or repainted. All window gasket and rubber was replaced. Both front, rear and all “trolley” or clerestory
windows were re-screened with original-style copper screening.

Even the furniture stays anachronistic in the refurbished Westcraft Sequoia.

Several modern amenities were added, all the while retaining the vintage look. A new awning was made, using Sunbrella fabric. All light bezels were rebuilt with new bases, but the original glass lenses were retained. Brand-new wheels were installed and painted to match with new white-wall tires. For safety, an entirely new LP-gas system was installed. The under carriage was prepped and cleaned, and rubberized undercoating was applied.

The interior had to be gutted, with all existing cabinetry removed from the coach, repaired and re-skinned as needed and then refinished. Wall and ceiling panels were removed, and the trailer was reinsulated and completely rewired. The interior was then re-paneled using 1⁄8-inch birch, as would have been used in 1948. Expandable insulation was also shot into the floor, and a new sub floor was installed.

Period-correct Marmoleum was installed with a border on each side with an inlaid Westcraft “W” at the entryway. A hidden surround-sound system was installed with a Blu-ray player and two 20-inch LCD screens, which are on motorized linear actuators that move up and down out of the cabinets. All of the appliances, including the stove, refrigerator and kerosene heater were dismantled, reconditioned and refinished to match; however the kerosene function of the heater was disabled for safety reasons.

The all-wood interior turns the redone antique into a homey cabin on the road.

Two forward cabinets were combined to make a bathroom, and a new toilet was installed. New stainless-steel countertops and a backsplash were fabricated and installed along with a new sink and faucet. An on-demand LP-gas water heater was added and vented through the roof. All new plumbing and drain lines were then installed.

Anna added, “We searched long and hard to find an original click-clack couch and finally found one in amazing original condition. All of the inserts for the trolley windows were remanufactured on a CNC router; they are now better than the original with decorative metal trim. All cover plates, trim rings, etc. were also copied with a CNC machine and installed to match. Additional light fixtures were added in a tasteful way with several on a dimmer switch.”

The final result is a trailer that looks like it did the day it rolled out of the factory, but includes some subtle creature comforts and safety features that weren’t available at the time.