Playwright Oscar Wilde once wrote that, while beauty captures your attention, personality is what captures your heart. One look at Kathy and Jim Nova’s 1983 Georgie Boy and you know exactly what Wilde meant. In an era when motorhome exteriors seemingly all sport similar lines and swirled paint, you cannot help but love the Nova’s unique Swinger, possibly the only “rat rod” RV on the road. 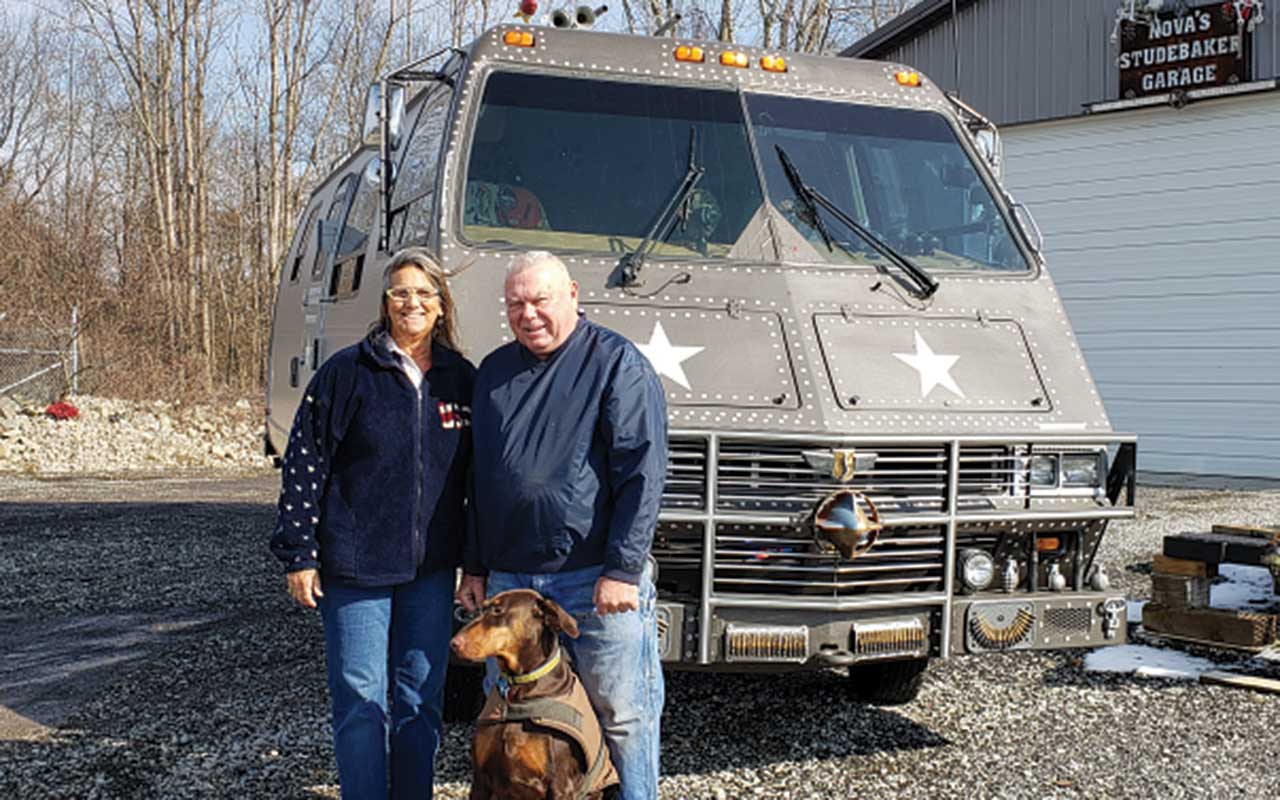 The Novas estimate they have invested about $60,000–$65,000 on their Georgie Boy, but the results surely speak for themselves.

What is a Rat Rod?

In case you aren’t up on mobile art projects, a rat rod is just that — a rough-hewn automobile that is meant to evoke the garage-built hot rods of another era through the builder’s choice of paint (or no paint at all) and creative and/or decorative use of automotive and nonautomotive parts. In this case, a once traditional Class A purchased from Kathy’s father in 1996 evolved into what Jim calls the Urban Assault M-50 Vehicle, a reference to the RV in the 1981 comedy classic, Stripes. The inspiration behind this unusual design comes from the family’s connection to NASCAR racer Ryan Newman, a family friend.

“Over the years we changed the colors and emblems to match his sponsors. When it was Army, we added military features like ammunition, grenades, shovels, axes and gun turrets,” Jim explains.

Add to that, Hammertone paint, which they applied with a roller for effect, along with thousands of military-style rivets, and the end result was so eye-catching that even when Newman’s sponsorship changed, they decided to keep the Army theme.

“We liked it so much that we just stopped there.” 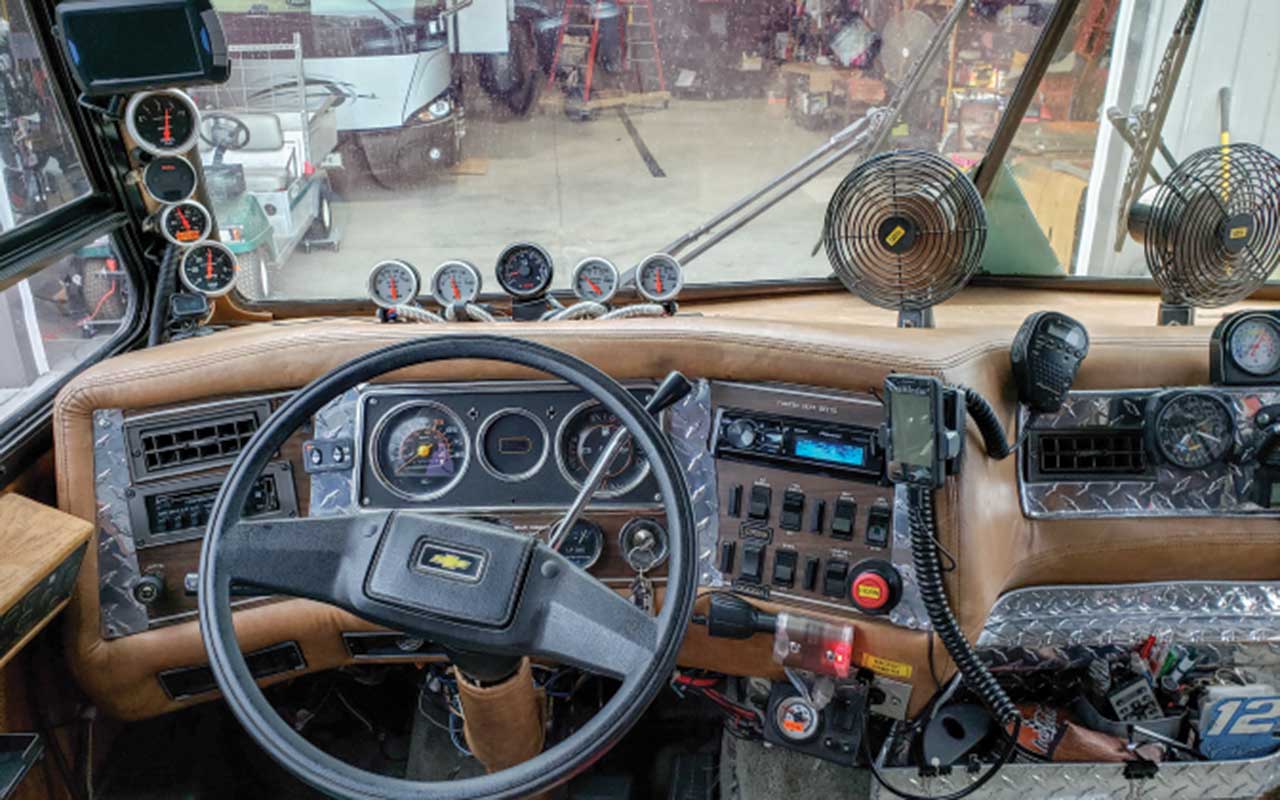 Multiple instruments give the cockpit a retro feel.

The 28-foot Georgie Boy bears little resemblance to the original, both inside and out. The suspension on the P-30 chassis was upgraded, front and rear air bags were added and a Big Foot hydraulic leveling system was installed. The 454-cubic-inch Chevy engine was upgraded with racing electronic ignition, fuel injection, exhaust headers and oil/transmission coolers. All basic engine functions are monitored with new gauges, along with the addition of a tachometer and instruments for the measurement of transmission temperature, rear axle temperature, vacuum, fuel pressure, air-bag pressures, house and chassis battery condition, tire pressure and even altitude.

The interior was, in Jim’s words, “a complete rehab.” The solid-oak cabinets and doors were refinished, all appliances were updated, lights switched to LEDs, countertops were recoated to look like granite and all plumbing fixtures were replaced. Kathy incorporated the rat rod concept as well as racing in her interior design, with details like a light-up racing header instead of the original oak spindle for cabinet support. Everything — from blankets to bedding to shower curtains — is tied to a NASCAR theme. There’s even a roll bar over the cockpit. The most striking feature of the interior is the diamond plate covering the motorhome’s walls and ceiling; it was also the most challenging to install. 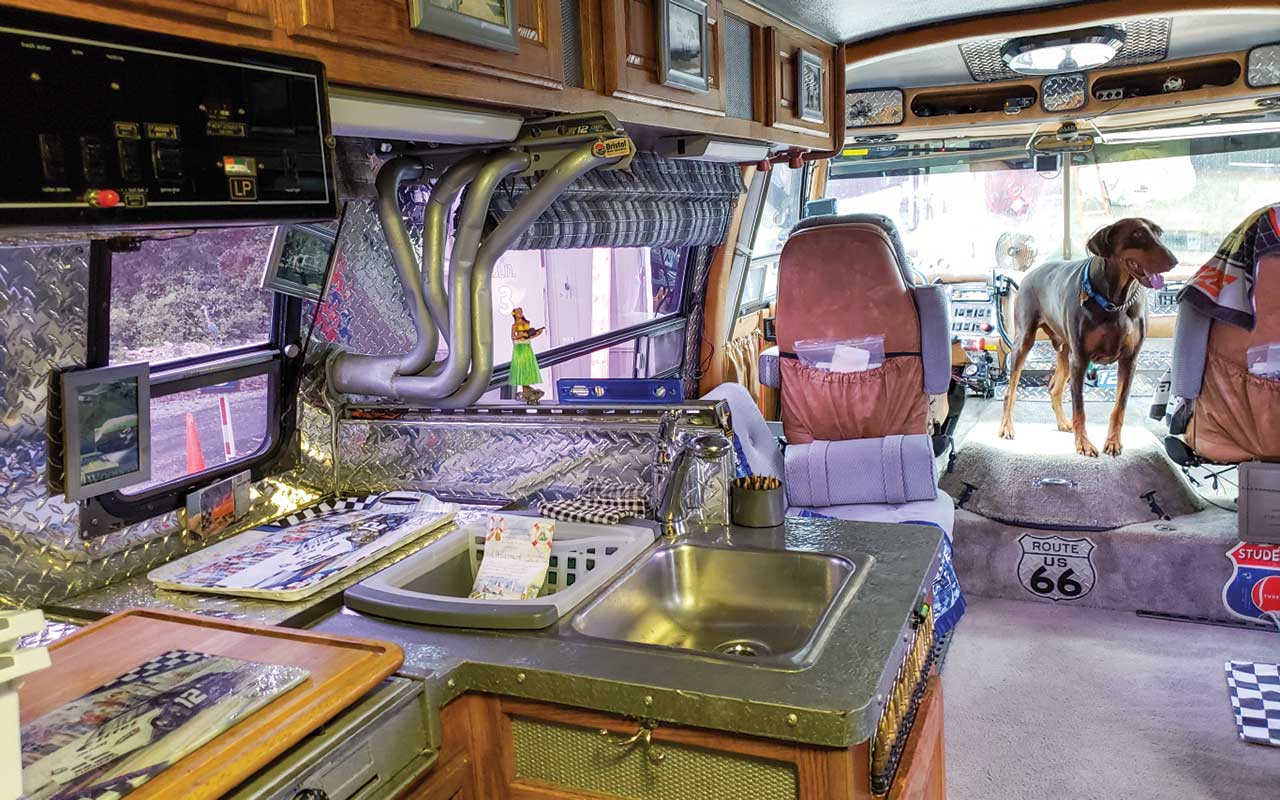 Diamond-plate walls, ceilings and a racing header as a cabinet support are all part of the rat rod experience.

“The plate panels were very difficult to cut and match because of the curved walls and the odd-shaped windows,” Jim says.

Kathy and Jim say that living where they do has made it easier to work on their RV. The couple lives near Elkhart, Indiana, known to all as “The RV Capital of the World.” They say they are fortunate to have so many RV resources, surplus parts stores and skilled craftsmen nearby. Still, their Georgie Boy is a vintage unit, and their particular Swinger Brookside model is rare. The couple has crossed the country many times and has yet to see another one on the road, in a field, in a campground, or in an RV salvage lot. Having a rare vintage motorhome can make searching for parts difficult, even in Elkhart. When the original Kohler generator needed a carburetor, the couple’s mechanic found “what was probably the last one on Earth.” And Jim is particularly cautious when using the curved entry door, fairly certain he could never replace it.

It was the realization that they might have the only Brookside model still around that led to their very unusual front-end protection. While the Georgie Boy may look like a tank, with its steel cage frame and 2-inch-thick laminated fiberglass side walls, the front and rear caps were originally constructed of fiberglass that is only 1⁄8-inch thick. The couple was on a trip to Canada when numerous wildlife sightings led them to consider that a collision with a deer or moose would completely destroy the motor-home’s front nose, and there would be no replacement panels available. So, Jim and his mechanic designed, fabricated and built a protective grille they named the “Deer Shredder” — complete with a 1950 Studebaker Bullet Nose. Not only does it shield the fragile front end, but “It’s also useful as a ladder for cleaning the front windows,” Jim laughs.

Creating a rat rod from a classic motorhome is not a job for everyone. With a master’s degree in Vocation Building Trades, Electronics and Drafting, and years of experience as a waterproofing and foundation repair contractor, Jim’s background in structural repair has been helpful in the Georgie Boy’s renovation. He estimates that they have invested about $60,000–$65,000 in their motorhome, with Jim doing about half of the labor himself. 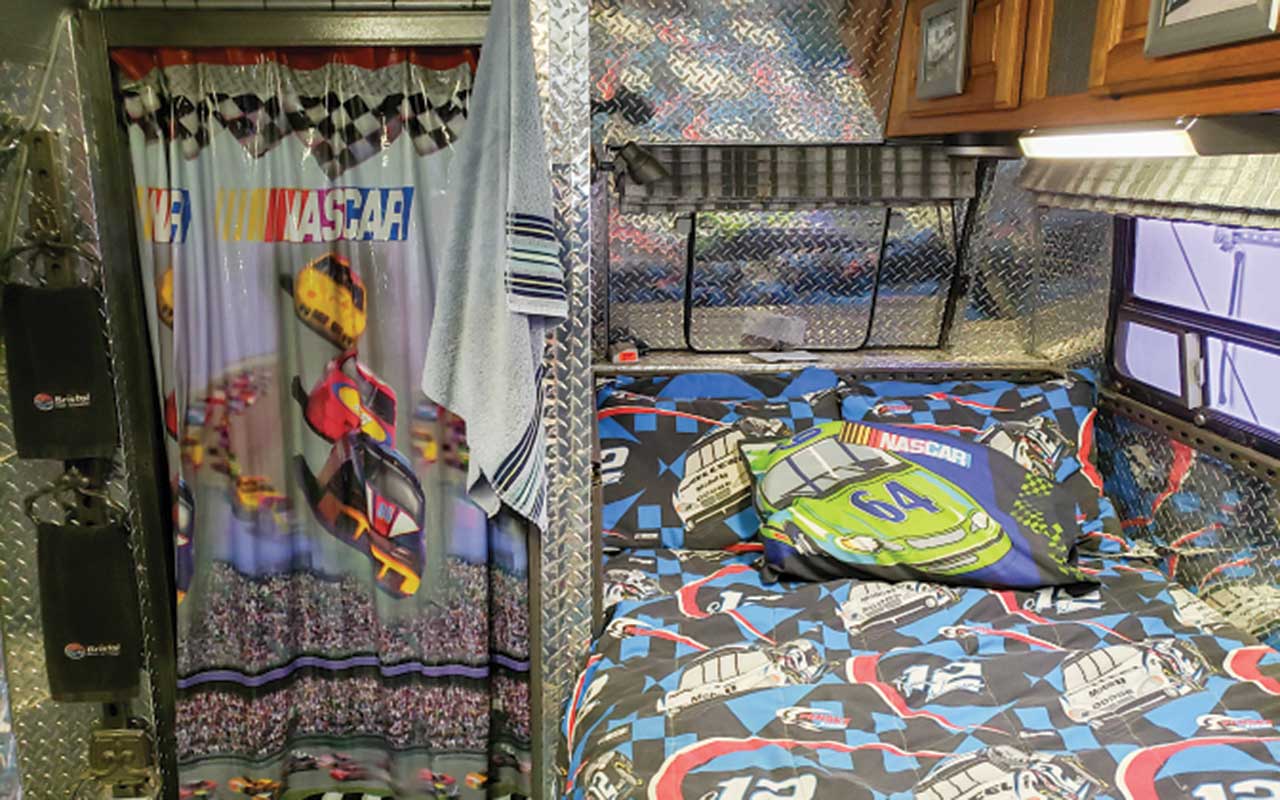 The interior décor reflects the owners’ love of NASCAR.

Obviously, a rolling piece of artwork like the Novas’ Urban Assault Vehicle turns a lot of heads. In addition to being a fixture at NASCAR races, they have taken their motorhome to car shows and antique extravaganzas, where they are always asked to come back again. In fact, wherever they park, “a crowd forms,” laughs Jim. “It is a real photo opportunity.”

Kathy agrees. “At truck stops, people are always coming up and asking, ‘Can we take a picture?’”

And it isn’t just while they are parked. She recalls one incident on the interstate in downtown Cleveland, Ohio:

“This car was going in and out of traffic beside us and in front of us, and we didn’t know what they were doing. They almost caused an accident. Then we realized they were holding a camera out of the window, trying to take our picture!”

While the Novas love their truly unique Georgie Boy Swinger and feel confident enough in its reliability to take it almost anywhere, they did recently add a new, larger Tiffin Class A motorhome to their personal fleet for longer RV trips. But they still take their rat rod to racetracks, car shows, and on cottage visits to see friends and relatives. There’s no question that their little Class A with big personality has captured their hearts — and won a special place in the family of classic rides.

Details like a shovel and ammunition add to the Urban Assault M-50 Vehicle’s Army theme. The vehicle is a fixture at NASCAR races, and always turns heads at shows.

Georgie Boy coaches were manufactured under the Coachmen banner until 2008. While there are a large number of later-model Georgie Boys on the market, motorhomes like the Swinger Brookside are rare. A recent online search found fewer than 10 listings for similar 1980s Georgie Boy motorhomes, ranging from a $900 unit needing a new engine to $16,900 for one in good condition. To find out more about Georgie Boy motorhomes and to check owner listings, go to www.georgieboyclub.com. If you’d like to create your own rat rod RV, you can start with any vintage RV. For inspiration, or to learn more about vintage hot rods, visit the Vintage Street Rodders of America at https://vsra-usa.com.

Should You Replace Your RV Furniture or Just Reupholster It?

Dreamy Bedroom on a Budget 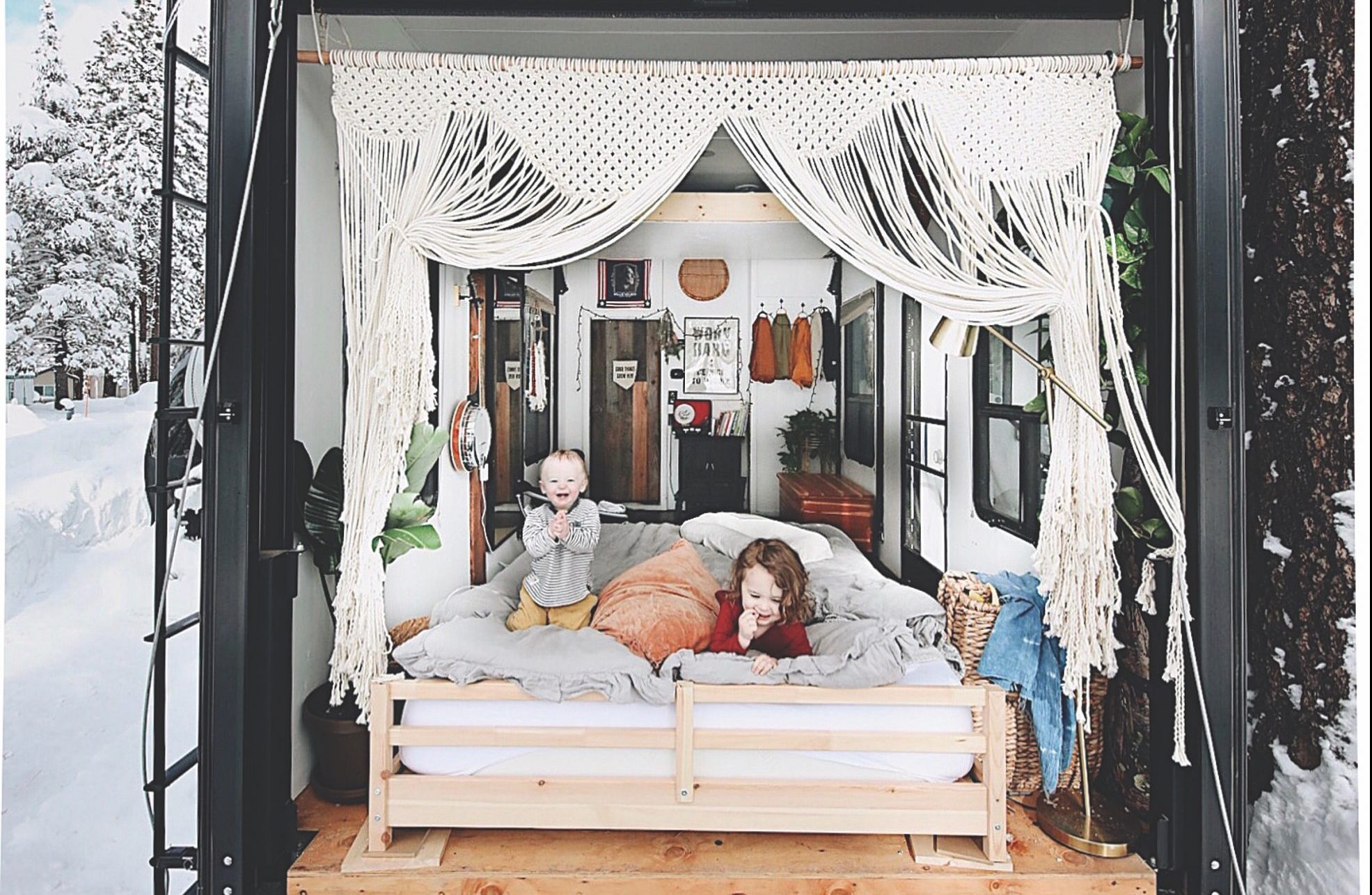 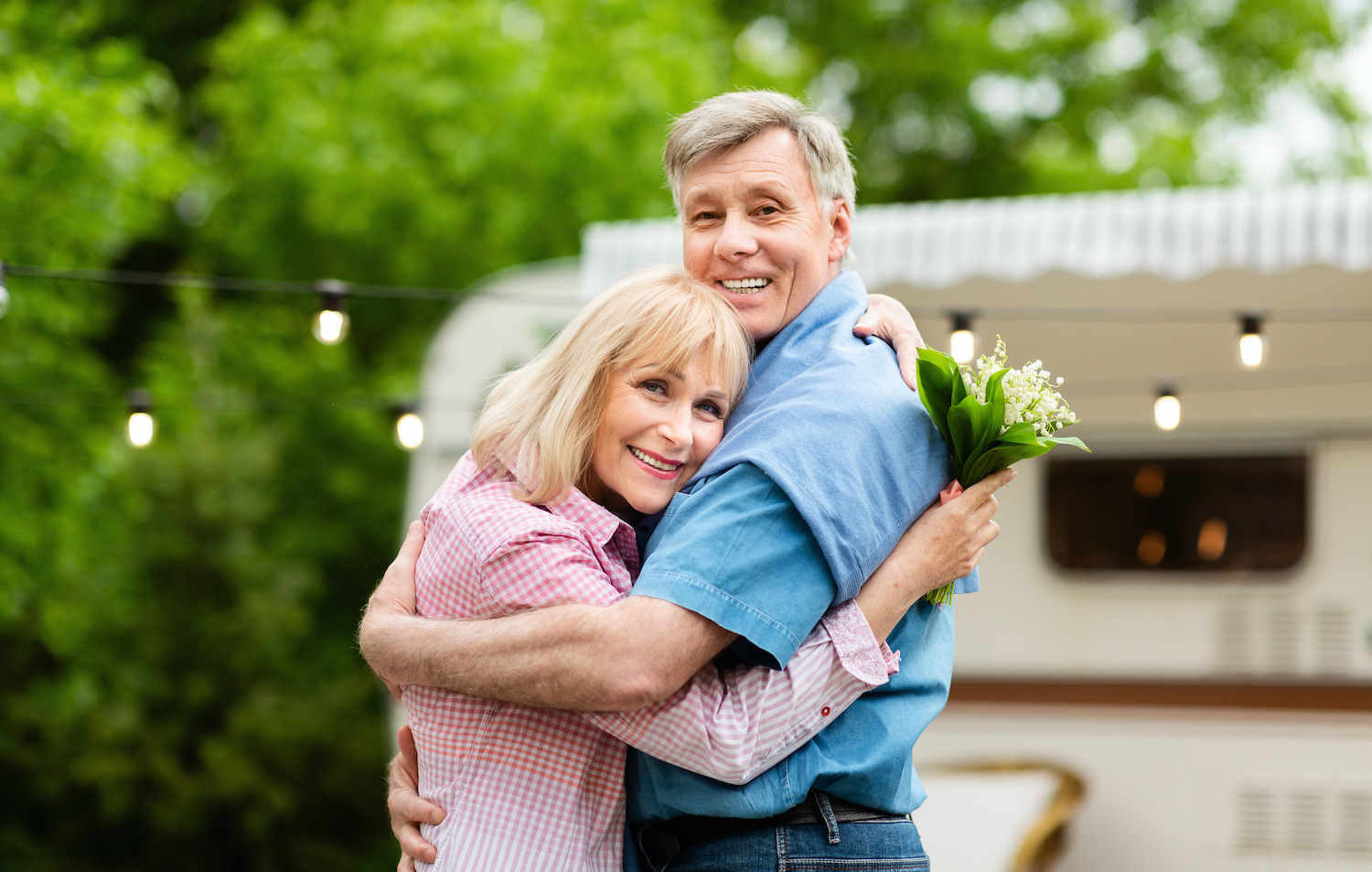