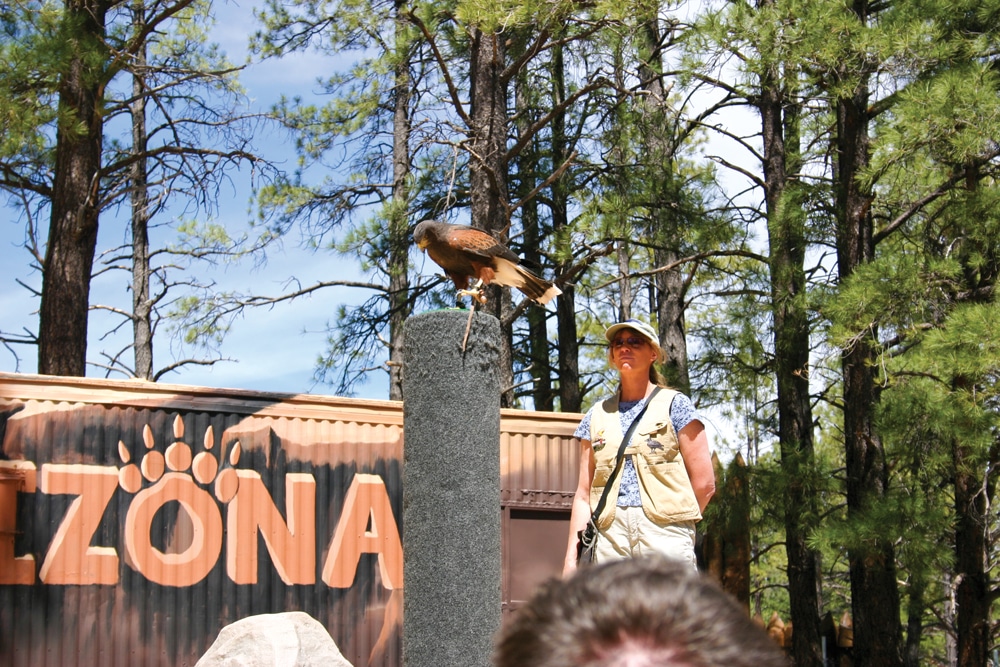 Williams, Ariz., bills itself as the “Gateway to the Grand Canyon.” Motorhome travelers can bypass the town itself, but we’re here to tell you that would be a mistake. Williams and the surrounding Kaibab National Forest offer an ideal setting as your base camp, and if the Grand Canyon is not on your itinerary, Williams is also a good place for an overnight stop along Interstate 40. After our visit, we’ll wager you’ll be tempted to stay a while.

The town takes its name from Old Bill Williams, the mountain man and fur trapper who may have spent the winter of 1832—1833 in the area. Not much is known for sure about Old Bill, but he did make enough of an impression that a mountain was named for him, and around 1882, when the tracks of the Atlantic and Pacific Railroad were approaching, settlers in the area put the name of Williams on the newly formed town. In 1980, the town chose to remember its namesake by erecting an 8.5-foot-tall, 1,000-pound bronze statue that graces Monument Park at the west end of town.

It was the Atlantic and Pacific, and later the Santa Fe Railroad, that served as the primary reason for the town of Williams’ existence. Today, another railroad is one of the major reasons people stop and stay. Each day, locomotives of the Grand Canyon Railway depart from the historic Williams Depot for the Grand Canyon, over tracks first completed in 1901 by the Santa Fe Railroad. Vintage diesel engines from the heyday of classical train travel haul refurbished passenger cars, including several Vista Dome cars. At the end of the train is a special open platform lounge/observation car. When the trains reach Grand Canyon Village, passengers disembark only steps away from the canyon rim and the famed El Tovar Hotel.

Some days, the growling diesels are sidetracked or used in helper service behind one of two operational steam locomotives owned by the railroad. Having loved steam engines since I was a boy, I was sorry the railroad wasn’t running them every summer day as they once did. But I also know that steam engines are notoriously difficult to maintain and are hard on the track because of the pounding action of the steam pistons. These steam engines do have some green credentials; their fuel isn’t coal or petroleum oil and instead they run on waste vegetable oil.

Many motorhome owners choose to visit the Grand Canyon by train, leaving their motorhomes in one of several full- hookup parks in Williams. The Grand Canyon Railway touts its 124-site RV park adjacent to the train depot. There’s no need to unhook the dinghy vehicle to get to the station, and during your walk to the platform you can enjoy the view of Bill Williams Mountain and the surrounding pine covered peaks.

Other RV parks are conveniently located, though not within walking distance of the station. Railside RV Ranch on the east edge of Williams places you near the tracks where train buffs can revel in the departure and return of the daily trains. If you are a train buff and are fortunate enough to be there on one of the weekends when the railroad runs its Cataract Creek Ramblers (returning in 2013), you’d be able to sit back and watch one of the steam engines work hourly eight-mile runs. Two KOAs located a few miles out of town give their guests a chance to enjoy Arizona’s fabled pine belt while avoiding the constant noise of the Burlington Northern Santa Fe Railroad main line that passes adjacent to town.

Another option is camping in the surrounding 1.6-million-acre Kaibab National Forest, which encompasses one of the largest contiguous ponderosa pine forests in the United States. There are developed campgrounds (no hookups) and an abundance of boondocking locations. We drove south out of Williams along the eastern shoulder of Bill Williams Mountain toward Dogtown Reservoir and were simply amazed at the number of level spots under towering pines where folks had parked everything from small tent trailers to huge motorhomes. ATVs were everywhere. It was definitely a playground for more than just kids.

Although the Grand Canyon Railway is a big draw, Williams also appeals to those who have no interest in tourist railroads. Its main street was part of the iconic Route 66 until Oct. 13, 1984, when it became the last town bypassed by I-40. A stroll downtown takes visitors back in time as they check out shops housed in buildings constructed during the 1890s and early 1900s, before Route 66 became America’s chosen route west. Every evening from April to October, the Cataract Creek Gang stages mock gunfights right in the middle of town. They’re much cornier than the Tombstone variety, but also more fun.

We wandered in and out of shops carrying an eclectic mix of curios, many geared toward the ongoing love affair America seems to have with Route 66. Others reflect the proximity of the Navajo Nation and the nearby Hopi Reservation with their offerings of jewelry and pottery. We quickly noticed the quality displayed in the Navajo-owned Thunder Eagle jewelry store. Offerings were not limited to Navajo artists. Excellent pieces from Zuni craftsmen showed off their tribe’s traditional inlaid turquoise and coral jewelry at its best. Artists from other Southwest tribes were represented as well.

Williams also has an abundant supply of restaurants, should you decide you don’t want to figure out what to feed your hungry hoard at night. Even if that hoard is just your significant other, for many, eating out is one of the pleasures of traveling in a motorhome. We took note of options such as Cruiser’s CafÃ© 66, replete with bright red-and-white umbrella-covered outdoor tables and a red 1937 Ford hot rod perched on a pole. The folks who operate the Grand Canyon Brewery next door also own Cruiser’s, and their beer is gaining a solid reputation far beyond the boundaries of Williams. Rod’s Steak House proclaims its continued presence on Route 66 since 1946, which is even before General Motors began producing the Chevy Corvette that became the icon of the fabled highway.

We were fortunate during our visit to hear a recommendation for the Red Raven restaurant downtown, a place so good we couldn’t bring ourselves to try the other possibilities.

One of the newer attractions in the area is Bearizona, a wildlife park experienced from your vehicle. The park features bison, bighorn sheep, timber wolves, wild burros and black bears. A walkable area features baby bears along with bobcats, skunks and other smaller creatures. For the younger set, there is a petting zoo. We have already seen in the wild all of the animals on display at Bearizona, and many well-traveled RVers will likely have the same impression. However, if you have kids or grandkids in tow, this is certainly the place to see these animals up close. The Grand Canyon Deer Farm, located eight miles east of Williams, is another option for families traveling with children.

For the aviation-interested traveler, the Planes of Fame Air Museum is located about 30 miles north of Williams in Valle, on the highway to the Grand Canyon. A number of airplanes from the early days of aviation to recent times are on display. Many are from World War I and II and the Cold War period, while others reflect civil and commercial aviation. Several are flown on occasion.

A significant exhibit is the Lockheed Constellation used as Gen. Douglas MacArthur’s personal plane during the Korean conflict. The interior has been restored to the configuration at the time the general used the plane. While the Lockheed has not been airborne for some time, it is capable and crews from the museum’s Chino, Calif., facility come to Valle regularly to run the engines and check its condition.

A large hangar contains the majority of the exhibits, including examples of such famed craft as the German Messerschmitt 109, mainstay of the Nazi air force throughout World War II. Other exhibits feature a wealth of photos, written information and equipment including the famed Norden bombsight used in Allied bombers over Europe during World War II. The museum also displays about a dozen antique automobiles in absolutely stunning condition. A 1903 Reo Roadster looks as if it has just been driven off the showroom floor. Nearby was a beautiful 1934 Ford four-door convertible, along with several Model-T trucks, delivery vans and an early roadster that featured a small oval windscreen.

The biggest attraction Williams has to offer is its proximity to the South Rim of Grand Canyon National Park. The Grand Canyon belongs on everyone’s bucket list, and if you haven’t been there, make it one of your top priorities. Williams provides an excellent staging ground for your visit, even if you don’t use the train to get there.

We had stayed in Williams once before, when we joined the throngs boarding the Grand Canyon Railway for its journey to the park. But now we also reflect on the number of times we zoomed right on through with only a passing thought to, “Gee, we really ought to check this place out.” Our recommendation to you is take a few hours – or better yet, a few days – and get to know Williams and its surrounding area. You won’t be sorry.